The AMEX effect and its impact on pricing

This article is a part of our Protect the Hustle series where we explore the truth behind the strategy and tactics of B2B SaaS growth to make you an outstanding operator. Each week we publish an interview with a SaaS founder or executive going deep on a topic and then a longer-form piece on an area of SaaS growth.

Today, we dive deep into the analysis of The AMEX effect, which is a phenomenon of pricing at the point where your customer doesn’t think much about the purchase. We’ll be walking through how to take advantage of this, including all the data.

Pricing is at the very core of your business. No matter what type of product you're selling you've created some sort of value, and since we don't trade goats for wheat anymore (at least in the economies we all play in), you ascribe some sort of currency amount to that value.

Your pricing is the exchange rate on that value. You can influence that exchange rate in many ways—higher value features and better packaging, selling to different types of customers who value the product more, charging based on some element of usage, and the list goes on.

You'd think something so central to the very reason our business is in existence would get a lot of attention, right?

Pricing is basically the fruits and vegetables of growth. Crucial to your success and can definitely make the journey quicker and easier, but not as exciting when you have access to a world of processed sugar, salt, and fat. We're pretty terrible at getting our greens as an industry. We think pricing is an exercise harangued once every three years when our board yells at us or someone wakes up and realizes there's a better way to grow.

I've been writing and speaking about pricing for almost a decade now, trying to rally the market into realizing the best companies in the world are doing their research and changing something about their monetization every three months.

While most days I feel like Demosthenes shouting at the ocean, I think the problem ultimately comes down to me. To continue the faulty metaphor, I need to smear some cheese on this broccoli. I've been trying to teach you the strategy and fundamentals, when you could benefit from some tactics that can be easily and quickly implemented.

With that in mind, here's the culmination of a bunch of research around something we coined as "the AMEX effect" that we've studied across 3.2M consumers at this point and will help you tactically improve your pricing with very little work (I'm upset this made me sound like an informercial, but this is where we are now).

The AMEX effect is also responsible for some of the most interesting purchasing quirks out there:

As a business, the AMEX effect can be extremely powerful in helping your conversion rates and overall monetization strategy. As a consumer, it can also help you realize when you're getting strung along a bit too much. Regardless, this should be helpful. So let's jump into defining the phenomenon a bit more before jumping into the data.


Why does the AMEX effect exist?

Us humans think about pricing and value on a spectrum. We know certain items are around a certain amount because we've purchased similar items in the past, or we at least can stack an item's value in the context of other things we value very quickly. This is also why we're pretty terrible at pin pointing the exact price of an item. There's a reason why contestants on the Price is Right statistically win more when the game involves guessing if an item is more or less expensive than another item or price point, rather than when the game requires them to know a box of soap is worth "$3.82." [1]

Our personal circumstances also impact our perception of value greatly, particularly when it comes to age or income. When you were a kid and earned that small allowance doing chores, the idea of purchasing your first computer seemed daunting. Yet, most of you with full-time employment today have no problem purchasing a $5 latte multiple times per week.

My personal favorite example here is when people ask billionaires, like Bill Gates, the prices of grocery items. He hasn't been to a market in decades and his wealth gives them wildly incorrect answers—typically 5x the price of a gallon of milk or loaf of bread.

While many factors fit into the calculation of the AMEX effect for your target customer, when we run the numbers, the primary axis typically comes down to income when looking through consumer or prosumer products, and seniority when it comes to B2B products. Here's a breakdown of the AMEX effect by income. Put another way, this data answers, "What's the dollar amount where you'd start to think more about the purchase?". A more business focused question that's answered here is, "For a target customer, at which price will they think the least?" 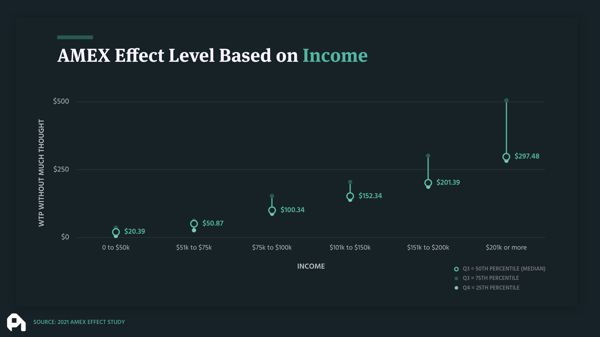 Notice how the higher the income, the stronger the floor on the range is—meaning if you have a target customer in that range, it's safe to say that's a solid price point. Lower income folks have weaker floors and stronger ceilings on the range—meaning there's more variance going towards zero. Practically, this means you can experiment going higher with affluent folks, but with less affluent folks there isn't a lot of wiggle room.

Also, keep in mind that it's not as simple as just putting a payment form in front of their face. They need to be somewhat interested in the product or have some level of demand. The lift isn't heavy here though.

In a B2B context, this follows a similar trend, but more than anything, it's based on the seniority of the person. Below, notice the interquartile range that front-line folks and managers have. If I was trying to sell a bottoms-up product, I'd want to make sure the price didn't exceed $250 for targeting managers and $500 per month for targeting directors. And something like $50 for front-line folks seems like a nice sweet spot. 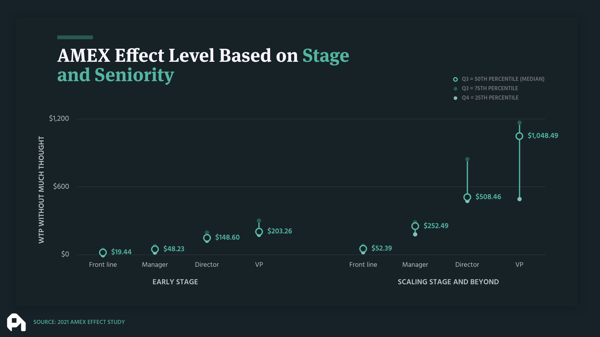 Keep in mind these are likely starting points to get the first dollar. Once you're in, it's easier to expand. In this light is where things get a bit fascinating. 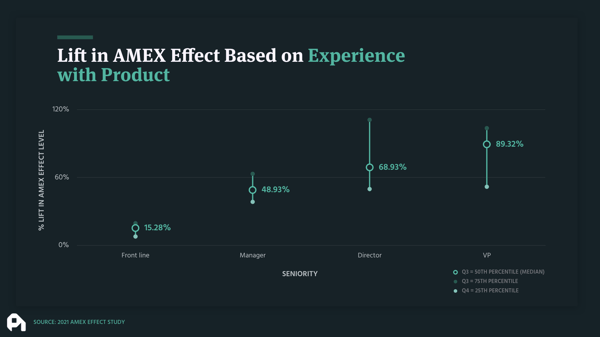 Notice how the AMEX effect is significantly higher for the individual who used the freemium version of the product. Why? They already have clear signal that this product is worthwhile and worth quickly swiping a credit card on. Their perception of value increased due to their circumstance. A lot of you give me guff for my stance on freemium being in every company's future, but this is another reason why that's the case.

Now let's look at a consumer scenario. We did a small study looking at the AMEX effect's different baskets of consumer products—food, beauty/cosmetics, apparel, etc. We took measurements before the person put together their cart of goods, and then right before the swiping of the credit card.

Notice how the folks who went through the trouble of picking out items had a much higher AMEX effect than those at the beginning of the purchase cycle. Our experience and buy-in changes our perception, because we're typically making micro decisions based on will and want versus logic. The result—we end up being ok to pay more. My particular favorite here is what I like to call the "hunger peak." Notice how in the food/beverage category the range gets pretty high. In looking at the data, that's being pulled up by food delivery scenarios where someone just needs to get the product so they'll pay (mostly) anything. 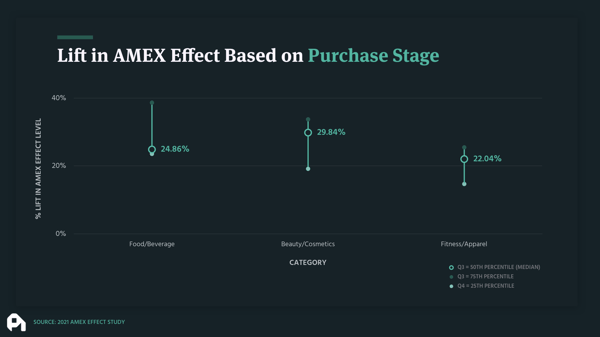 The phenomenon in the above graph is the reason food-ordering apps don't show you the fees until the end. Starbucks shows absolutely no prices until you reach the point where you want to place your order. Tailors and haberdasheries have for years gotten you to buy-in to the suit and then ask you to purchase the shirts, ties, etc. Larger products anchor you with buy-in and then take advantage of your lizard brain to get you through the conversion.

Implications for your business—what should you do with this information?

"But PC, some guy who sold a database company in 2006 is telling me I'm ruining my product's value if I give something away for free. He has a corvette -shouldn't I listen to him?"

No. No data supports that notion.

More broadly, we need to stop listening to the hotshots who built their businesses in a time when the recipe was as archaic as: raise money, dump it into channels, go public, profit. It's a great strategy when you could fit every tech company in existence in a pretty little powerpoint deck, not when companies are replicating mitotically like the cells of the body.

Old-school growth was a single move endeavor. New-school growth is multi-move. It requires you thinking through the steps of a prospect, not just dumping acquisition down your gullet.

Ok. I'm starting to get aggressive, which is hopefully entertaining, but also the point where I know it's time to wrap up. Ultimately, pricing comes down to understanding who you're trying to sell to and making sure you're providing them value. It's a beautiful, symbiotic relationship, especially in the subscription world where the relationship is baked directly into how you make money.

[1] For our non-US readers, the Price is Right is basically the most American game show ever. Contestants guess the prices of items in order to win the items, or more valuable items. Capitalism at it's finest and it's been on television for decades.

A compact guide to pricing strategy

On this episode of the B-side, Patrick provides you with a compact guide to pricing strategy, complete with examples and bonus advice.

Case studies and celebrity impact on retention and pricing

On this episode of the B-Side, Patrick digs into the rise of influencer and celebrity endorsements, and the impact they have on retention and pricing.