It’s the question on every SaaS founder’s lips: Is my churn rate too high?

While it might sound like a simple question on the surface, the answer is anything but. A “good” churn rate for one company might be terrible for another. Worse, comparing average churn rates across different markets and industries will leave you mired in confusing statistics and contradicting studies.

So how do you know what a healthy churn rate is for your SaaS company? Why is it so hard to define an average churn rate—and what does that mean for your subscription business?

What is the typical SaaS churn rate?

SaaS churn measures the number of SaaS customers who cancel their subscriptions for the given period. This metric indicates the long-term viability of a SaaS business, as higher churn means a company is losing out on customers and revenue. To streamline SaaS growth, businesses should strive to maintain an average SaaS churn rate between 3 and 8%. That said, churn rate varies based on industry and every business should have a good idea of their industry benchmark.


What is the average churn rate?

In SaaS, the average churn rate is around 5%, and a “good” churn rate is considered 3% or less. However, this varies greatly across businesses and industries, so in reality, there is no universal “average” churn rate. Churn (aka customer attrition) targets tend to fall all over the map, and everyone has a different idea of what an acceptable churn rate looks like.

I mean, just take a look at all these different surveys:

A 2018 KBCM Technology Group survey reported a median annual revenue churn rate of 13.2% and a logo churn rate of 21% among 162 respondents (although this excluded companies with less than $5m in revenue).

Nathan Latka interviews founders and publishes their SaaS metrics on his website—the average gross churn rate of the 300 listed companies is 16.8%. While it’s not listed specifically, I assume these are monthly churn numbers.

Subscription service Recurly reports an average monthly churn rate of 5.6% across a sample of over 1,500 sites. Its churn numbers vary between B2B and B2C, with B2C companies experiencing much higher churn (7.05%) than B2B (5%).

So based on this data, the average churn rate (specifically the average monthly revenue churn rate) could be anywhere from 1% to 17%, with most studies reporting the median monthly churn rate in the 5-10% range.

Why do average churn numbers vary so much?

Average churn numbers fall all over the map because every company is different, and every market is different.

Every industry has different factors that affect churn.

Subscription platform Recurly sampled over 1,500 subscription companies in 2018 from across their customer base using their platform to understand the average churn rate by industry. 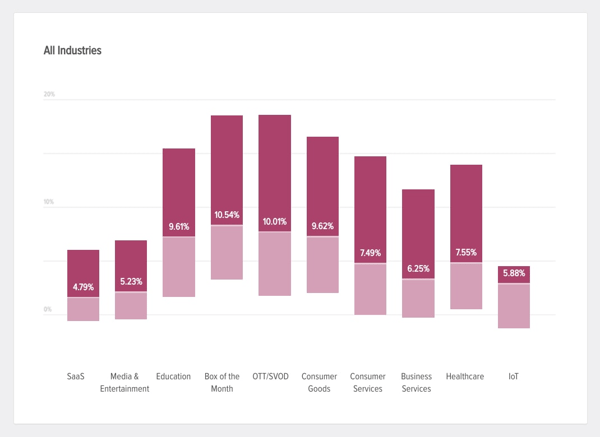 The data tells a clear story:

The biggest variations between average churn rate by industry depend on whether services are sold to businesses or consumers. SaaS, for example, includes a higher proportion of B2B products and services, all of which tend to experience lower churn. Consumer services, like subscription boxes and entertainment services like Netflix and YouTube, have a comparatively higher churn rate since the services aren’t seen as “essential.”

Check out our guide on customer retention rates by industry for more info.

Churn can also vary widely based on your pricing. Companies with low average revenue per user (ARPU) see much higher churn than those with larger ARPU.

Say your average revenue per user per month is less than $100. You’re likely seeing monthly gross revenue churn rates between 3-16%, with a median between 6-9%. That’s a lot of churn.

Yet, companies with an ARPU of more than $500 see significantly less revenue churn, with a range of roughly 2-6% and a median closer to 3-4%. 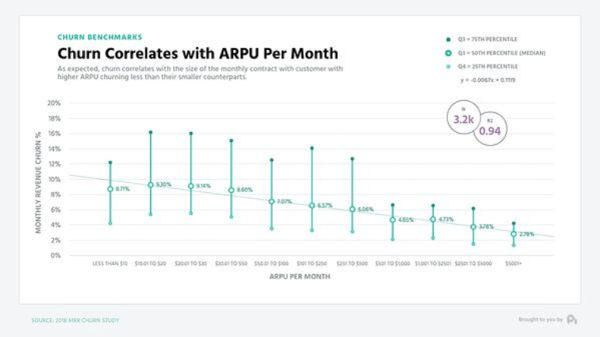 Existing customers are less likely to churn than new customers. Companies with a higher percentage of customers on annual (or longer) contracts tend to experience lower churn rates and higher lifetime value than companies that primarily offer monthly contracts. 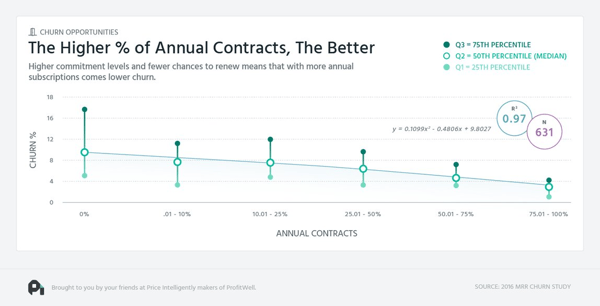 Annual contracts also tend to attract higher-value customers. These customers believe in you—signing a longer contract is a strong sign your customers are willing to commit to your product. If they're willing to make such a big monetary commitment, they're likely more invested in using your product to win and less likely to churn out after a short time period.

Like a fine wine, churn gets better with age. Established companies have dramatically lower churn than their younger counterparts. 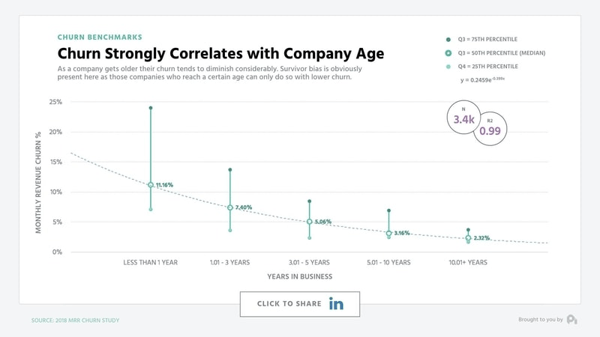 Why? As companies age, they get much better at understanding their customers’ needs and positioning their products and business model to meet those needs. Hence, those customers tend to stick with the company longer. There’s also an element of survivorship bias—companies that don’t figure out their high churn problems tend not to survive past a few years.

Venture money can solve a lot of problems, but churn isn’t always one of them.

Interestingly, venture-funded companies experience notably higher churn than those that didn't take on funding. In fact, churn rates for funded companies tend to be 20-30% higher than their bootstrapped counterparts.

Venture funding creates a false sense of security. Funding masks core problems that simply get bigger as the company gets bigger—in essence, letting you use a sledgehammer when you really should be using a scalpel. Founders are much more likely to spend their way out of growth holes when they’re gambling with someone else’s money.

Meal delivery services like Blue Apron are a prime example of this problem. Its average churn rate ended up being so high, that all the customer acquisition spend and product add-ons in the world weren’t enough to offset losing such a high number of customers.

Is there such a thing as a “good” churn rate?

According to our studies, the average churn rates for SaaS companies are all over the map—everywhere from 1-20% of MRR (monthly recurring revenue). Therefore, a churn rate at the low end (2%) would be considered “good.”

But that doesn’t tell the whole story. Since every company, product, and market is different, it’s impossible to properly compare churn rates across different companies. There are just too many factors in play.

So what benchmarks should subscription companies aim for? What is a good churn rate?

For established companies and enterprise products that have found product-market fit, revenue churn should be low and stay low. Jumping back to our ARPU data from earlier, companies with ARPUs in the $500+ range should have an average churn somewhere in the 2-4% range—but ideally no more than 6%. These numbers are backed up in our company age studies—companies over three years old should be in the same range.

Early-stage companies should aim to improve churn over time

For early-stage companies still searching for product-market fit, though, it depends. Churn in the first year tends to be much higher, often hovering around 10-15% per month (and ranging as high as 24%) as companies figure out their product marketing and pricing strategies to fit their target customers.

As you get better at finding and retaining more ideal customers, that rate should go down over time. Your best benchmark should be your own metrics from last week, last month, or last year.

There’s no silver bullet when it comes to improving your average churn rates. Every subscription company struggles with churn for different reasons—what works for one company might not work for yours.

There are, however, a few concrete things every subscription company can improve to bring down a high churn rate.

Increase your proportion of annual contracts

Annual plans are essential when reducing churn, yet KBCM reports that nearly 20% of SaaS companies still have an average contract length of less than one year. There’s no excuse for a SaaS company not to be offering annual contracts—increasing your proportion of annual to monthly plans is one of the fastest ways SaaS companies can reduce churn.

Some tips for encouraging customers to sign annual contracts:

Bring down your payment failure rate

Credit card delinquencies are another leading churn factor you can easily fix. Up to 20-40% of churn is typically caused by credit card failures, and most companies don’t have a good solution for combating this churn. 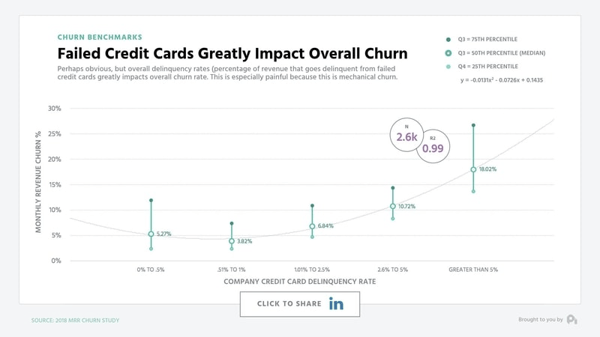 The good news? Automated tools like ProfitWell Retain make it easy to win back your customers, leveraging data to automatically reduce lost revenue and churn due to payment failures.

Lower churn and keep your customers

Churn is inevitable. You can’t wave your magic wand and make it disappear entirely. Improving your average churn rate is a slow and steady process and the key is to track it over time. ProfitWell Metrics helps you establish your churn baseline and identify types of churn, plus we offer you insight into SaaS metrics benchmarks that show you where you stand compared to others in your industry. 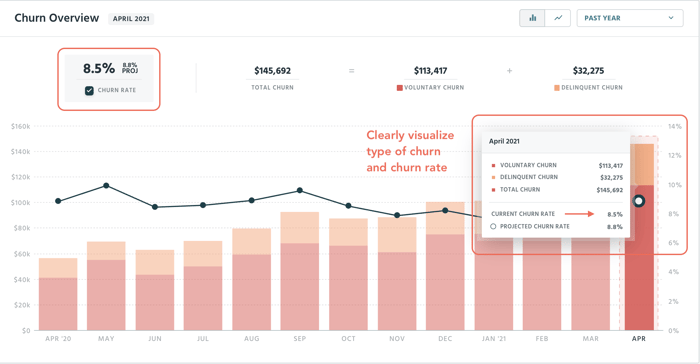 Stick to the basics—track your churn rate over time, focus on doing better than yesterday, and leverage the right tools whenever possible.

How to calculate the SaaS churn rate?

What is a good churn rate for SaaS?

All SaaS businesses that maintain an average churn rate between 5 and 7% are considered to have a good, healthy churn rate.

How do I lower the churn rate for my SaaS business?

To lower their churn rate, SaaS businesses can resort to one or more of the following tactics:

We collected data from over 3,000 subscription companies of all shapes, sizes, and verticals to determine benchmarks on average logo churn rate across multiple dimensions like age, price point, and average revenue per user.

MRR Churn and User Churn takes so much effort and they both have such disastrous impacts on your bottom line and companies are often tempted to use nefarious efforts to curb churn.

One of the most powerful growth engines in SaaS is net negative MRR churn, and is an incredibly powerful way to lay the foundation for a great business.

How to calculate revenue churn, why you should keep it low & how to do it

Visit the ProfitWell blog to learn more about revenue churn, how to calculate it, and how to keep your churn rate low and your revenue high.