The SaaS Freemium Model: Great for Acquisition, Not for Revenue

The debate continues to rage on as SaaS and subscription companies alike struggle to figure out how to best leverage a freemium acquisition model.

On this episode of the ProfitWell Report, Hiten Shah, Co-Founder of Quick Sprout and Product Habits, comes to us looking for the latest and greatest on freemium.

Ohhh freemium. We've been on both sides of this debate, so to answer Hiten's question, we'll dig into the data from nearly 6,000 companies across both B2B and B2C, as well as roughly 300,000 willingness to pay data points. Let's jump in.

Freemium is an acquisition model

Freemium is an acquisition model, not a revenue model, so this is a measured strategy to unlock lower CAC and the top of your funnel.

CAC is increasing across the board with B2B and B2C CAC up nearly 50% compared to a few years ago as marketing density continues to increase. 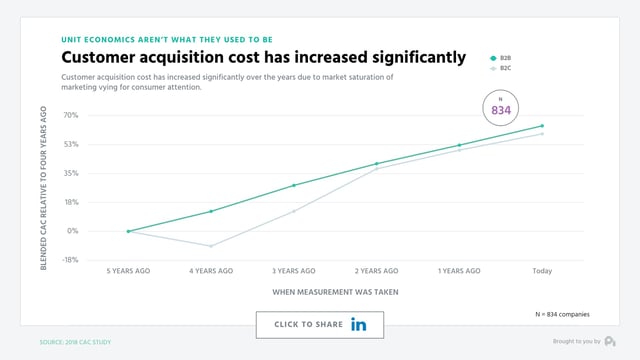 That being said, CAC amongst freemium companies is only 25-30% higher than 5 years ago. 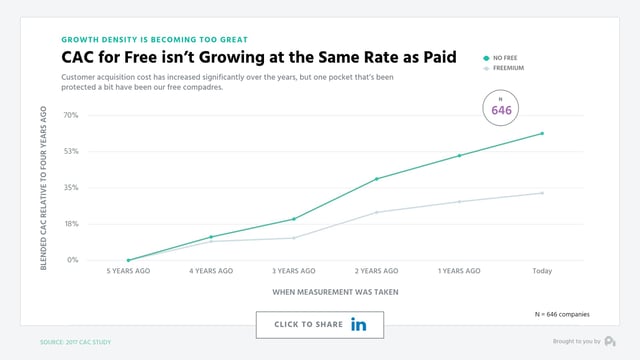 CAC is out of control

Customer acquisition costs (CAC) are rising. Fast. They are up almost 70% over the past five years: 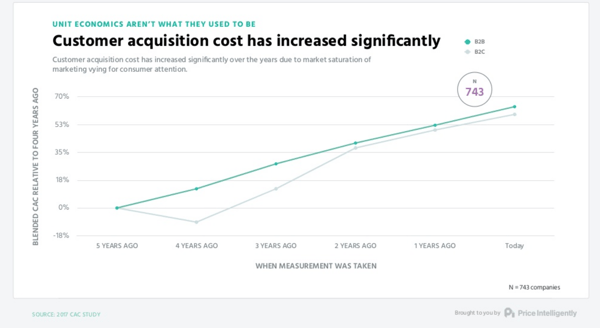 Why? Because we are hitting the limits of traditional growth channels. Companies are now using almost fourteen marketing channels simultaneously:

Growth density has become too great. Each of these channels becomes saturated, meaning that everyone has to move on to the next. But as the graph above shows, channel growth is leveling off. There aren't that many new channels to move into.

In addition, the ones we have aren't performing at the same standard they once did. Looking at Ebooks, effectiveness has been halved in the past five years:

Put together, this data means that SaaS companies now have to start looking elsewhere for acquisition. Freemium is one of these potential avenues that can allow companies to increase acquisition. This is the fundamental point about freemium that people are missing. As Patrick puts it:

Freemium is an acquisition model, not a revenue model.

Even Patrick admits this was his initial error. When he lambasted freemium in the early days, he was thinking about it from a revenue model angle. When he started thinking about freemium's acquisition potential, he put right his mistake.

Freemium works by lowering blended CAC, much like premium Ebooks once did: 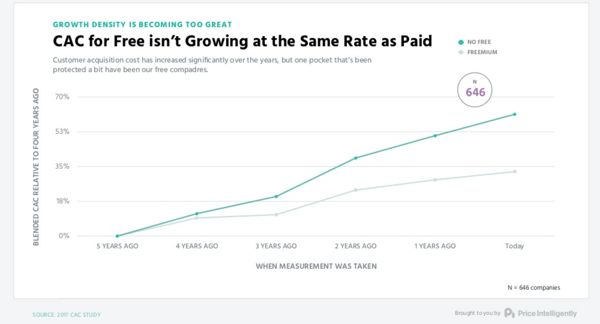 Freemium CAC is growing, but not at the same rate as with non-free products. This is because freemium allows you to do two things:

There are tens of thousands of SaaS products available and you compete with every single one. The closer a lead is to your product, the easier they are to acquire and the more likely they are to choose you. This is why freemium has the potential to be the best acquisition channel you have.

Diminishing returns of traditional free offers like free ebooks or white papers give us a look into this phenomenon. Note that the life of an ebook has dropped from being effective for roughly 6 months to now only being effective for less than a quarter. This is happening even though the quality of content as we saw in a previous study continues to increase.

Essentially, free products are becoming "premium ebooks" where the goal is to lower the activation energy required to start a relationship with a lead and push them to a purchase, as well as give you an opportunity to nurture that lead into perpetuity.

Free has actually become more effective than non-free alternatives. Retention is 15% better on an absolute basis for those companies utilizing the freemium strategy:

NPS is roughly 50% better for those companies utilizing freemium: 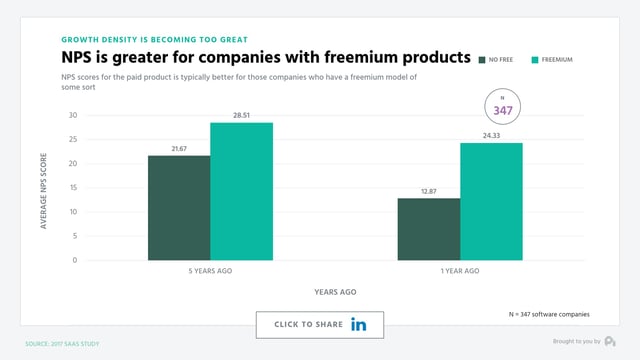 And the previous objection of a free plan eroding value is actually softening with the willingness to pay for an initial tier growing from a floor of roughly $150 five years ago to close to $1,000 today. 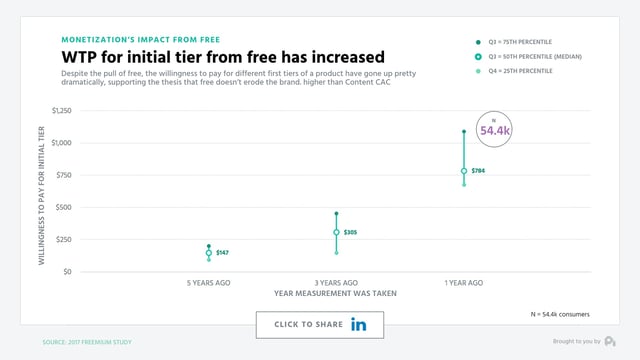 Freemium is a scalpel, not a sledgehammer

So should you jump on the free bandwagon? Probably. Although, while the data suggests some serious benefits, you should keep in mind that freemium is a scalpel, not a sledgehammer. We've seen the most effective freemium plans come when a company has been around for a few years and figured out their unit economics before opening the top of the funnel with free.

The story of ProfitWell

ProfitWell is a free product from a company that tells you pricing is what is missing in SaaS. The irony is not lost on Patrick. But, again, it all comes down to the data. When Price Intelligently wanted to launch ProfitWell, they did what they advise every other company to do—ask their target customers what they want and what they would be willing to pay. When they got the data back, it just didn't look good: 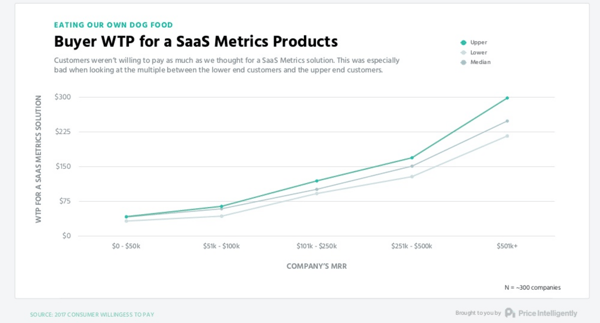 This is more recent data, but it shows they still made the right decision. What this data showed them was two things:

There just wasn't a paying market. When they used another strategy they espouse—quantified buyer personas—that add other metrics into the mix, the picture was even worse:

When taking CAC into consideration, they would break even for their low-end personas and lose money at the higher end. As a pricing strategy company, they knew this wasn't a great pricing strategy.

So they devised a strategy that put the core product out there for free and monetized additional features. This allowed them to:

Patrick's final data slide shows why this approach can work: 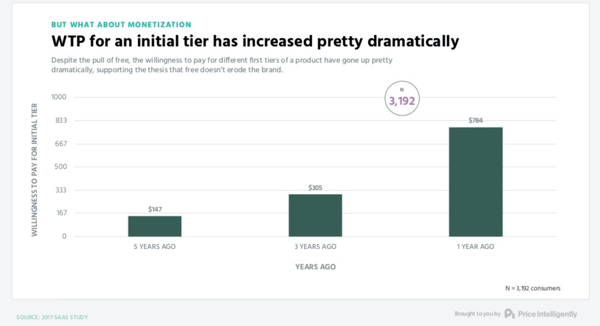 Freemium uses the product itself for marketing. It is the ultimate engineering as marketing. Your customers use the free product, see value, and want to pay more for more. By utilizing a free tier, you could effectively create willingness to pay in your customers.

Each year, Patrick chooses one thing to research. This year it is freemium. The data has shown him so far that free doesn't mean bad and free isn't going to ruin your brand. Free can actually improve your standing in your customers' eyes.

Perhaps most importantly for the CEO of a pricing strategy company, free doesn't mean no monetization. Freemium is for acquisition, not revenue. But by opening up your product for free, you can improve monetization. You can get customers through the door for little, let them experience your product, and then tell you where it needs to go next. And that “next,” that you can charge for.