E-commerce company Shopify helps entrepreneurs set up shop and sell products in online and brick-and-mortar stores. Founded in 2004, they are currently doing $580 million in revenue with a market cap of $13.1 billion. By focusing their efforts on the aspiring entrepreneur market, Shopify has been able to maintain a sense of momentum in their growth.

Shopify structures their pricing as straightforward monthly recurring revenue (MRR) with packages starting at $29 for their basic plan, $79 for their standard plan, and a big jump to $299 for their advanced plan. They also have a Shopify Plus plan, which competes with some of the larger e-commerce providers like BigCommerce and Magento, where customers need to reach out to Shopify's sales team for pricing. 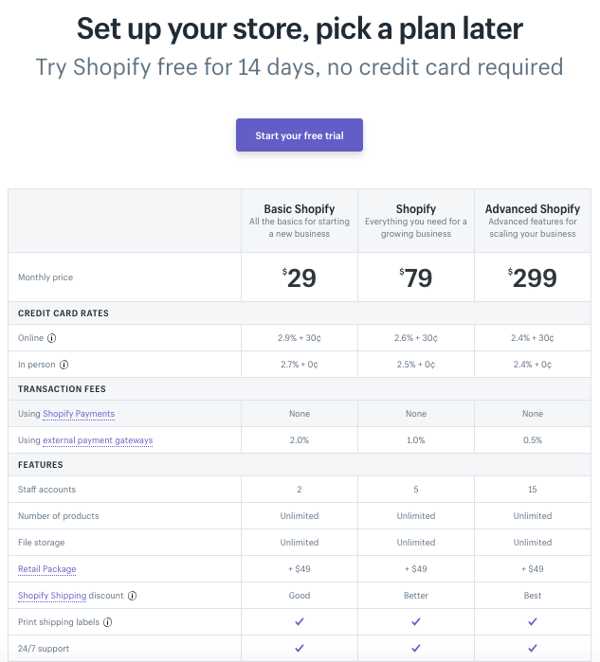 Setting their prices this way lets Shopify focus on their buyer personas, the aspirational entrepreneur and small business providers, while still competing in the market.

Credit card rates are added on top of this monthly recurring price, and Shopify does something really interesting by scaling these rates as the customer grows. On their basic plan the rate starts at 2.9% + 30¢, then 2.6% + 30¢ for their standard plan, and 2.4% + 30¢ for Advanced Shopify. These scaling credit card rates, along with a transaction fee percentage for using an external payment processor instead of Shopify Payments, account for close to half of Shopify's overall revenue.

At each pricing tier, Shopify is pretty much spot-on with their customers' willingness to pay based on gross merchant volume (GMV), which is the amount of revenue the customer does on a year- by-year basis.

We surveyed 4,178 current Shopify customers and found that when someone is just starting out, their willingness to pay is $26.18, which is just slightly under the basic plan at $29 a month. As the customer's business grows, that willingness to pay creeps up as well.

Once a customer has established themselves, we see the willingness to pay step up to $51.44 for under a GMV under $1M, $74.89 for between $1M and $5M, and $102.35 for $5M to $15M. This means that Shopify's standard plan at $79 a month sits comfortably for most growing businesses from an MRR standpoint. When the customer jumps up to $15M or more in GMV per year, their willingness to pay skyrockets to $304.19, which is actually above the $299 monthly price for Advanced Shopify.

Remember that these prices are based solely on the set monthly recurring price. Shopify is also gaining significant revenue from each transaction their customers process as well.

Shopify does a pretty good job offering the features their customers want as well. From the 4,178 customers we surveyed, there were only a few suggestions for where improvements could be made.

Taking a feature like Gift Card Management and moving it into the $79 pricing tier was a great move by Shopify. You can see that it lands directly in the Differentiable Features section, meaning that their customers are more than willing to pay for it. This shows a good understanding of their current customers.

What's interesting is that a feature like 24/7 support is in the Core Feature section. This speaks to Shopify's small business and entrepreneur customer base, as typically that kind of feature would be a solid Add-On instead. They really want access to that support but aren't willing to pay for it.

Customers with a brick-and-mortar store value the Add-On of Retail POS/Selling option, and this is something that Shopify has already taken advantage of, but they have a lost opportunity in terms of their Advanced Report Builder, which is currently something only available in their Standard and Advanced plans. Shopify would do well to make that an Add-On instead, as their customers are obviously willing to pay for it.

Creating a service with a long-term vision

“Shopify is really, really good at not fighting for the inch and going for the mile. I think that their pricing definitely shows that. They were, I believe, one of the first to do unlimited storage and unlimited number of products. They are including most of the features in particular plans, and not really differentiating except on credit card terms.” - Patrick Campbell

If Shopify were to move more classically up-market, then their current pricing strategy wouldn't work as well as it does. The type of customer at that level is looking for more of a Magento or BigCommerce; they don't have the same needs or preferences that Shopify is currently targeting.

In talking to store owners, we found that their feature preference in terms of unlimited storage really validates a lot of what we've seen in other products. For the most part, people just want more and more storage, making unlimited storage more of a marketing tactic than a differentiable feature.

You won't see this same pattern with more technical buyers, who are going to know exactly what kind of storage and bandwidth they need to be successful. 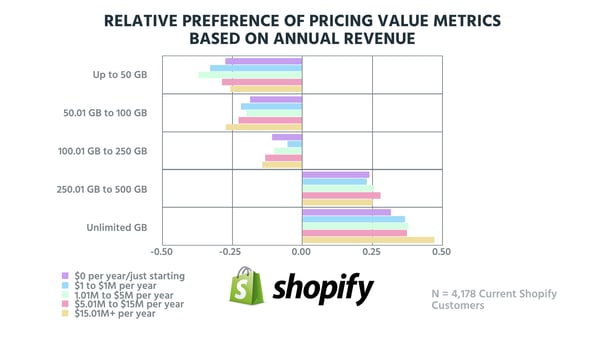 This graph shows the relative preference of pricing value metrics based on annual revenue for each different customer tier. Even for customers that are just getting started, the preference for unlimited storage is over 0.25, and this only increases as annual revenue goes up. When a customer reaches more that $15M a year, they're bumping up towards a preference of 0.50.

The preference for unlimited storage is evidenced on Shopify's pricing page as well, where it is available at every different pricing tier they have. Though they were the first to offer unlimited storage and number of products, it is now becoming the norm for any product that offers a service that is tied to storage in any capacity.

Shopify understands where their revenue streams come from

By including scaling credit card rates and transaction fees in addition to their base MRR, Shopify was able to boost their overall revenue almost 50%. This is something that is pretty innovative and speaks to how Shopify basically changed the game for what would otherwise be a regular subscription-based pricing model.

That said, Peter would only give Shopify's pricing page an 8.0. It's definitely an easy page to understand, and the design is pretty good, but they miss out on the opportunity to differentiate. Shopify offers all of their core features in every package. However, limiting the number of products available on their basic package would go a long way in moving successful store owners up to the standard $79 a month even faster.

Patrick goes with a 7.4, but disagrees with Peter regarding unlimited products. If the customer is aware of credit card rates and transaction fees, then they're already going to be incentivized to move up anyway, without even considering the number of products they're able to host. And if they aren't moving up because of that, as customers grow, they'll eventually need to be moving up based on their users at some point.

In this episode of Pricing Page Teardown, we're talking about Shopify, who's success stems from what's known as a mission metric. Is it enough to keep growing for the next 100 years?