Tearing Down the Pricing of World of Warcraft and Fortnite

Quick author's note: This episode was released inadvertently the same day as the tragic terrorist attack in New Zealand where the shooter released a video of his atrocities that appeared to be "video game" -esque. While nothing in the below is related to this travesty, we still want to be empathetic to anyone who is going through a difficult time and may be sensitive to us analyzing the monetization of games that involve violence. If that may be you, then probably best to skip this episode and post for now.

In this week's Pricing Page Teardown, we pit the Orcs against the Floss. World of Warcraft and Fortnite are two of the most played online games ever, pulling in billions of dollars of revenue between them, but with very different business models.

Created in 2004, World of Warcraft had 5.5 million active subscribers as of 2015. With their wise choice of a recurring revenue model—Warcraft charges a monthly subscription rate of $14.99 per month—they have revenue upwards of $82 million yearly.

Fortnite is a newcomer to the massively multiplayer online (MMO) world, released in 2017 by Epic Games. But it has taken the world by storm, becoming a cultural phenomenon—in large part because it is free to play. With 40 million monthly users, it makes money by offering cosmetic features, such as special animations and costumes for player characters. Between their release and a Forbes report in May 2018, the game made a collective $1.2 billion in revenue.

How do these two pricing models compare and where could they be getting more out of their audience? 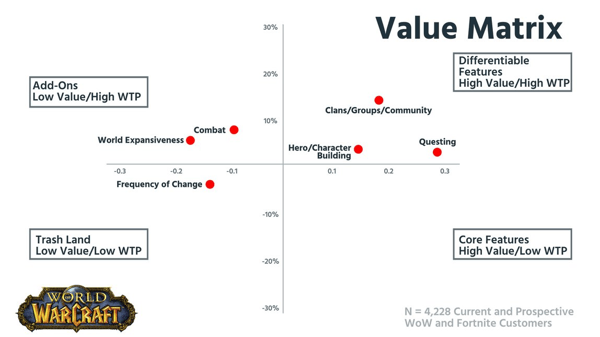 World of Warcraft is, at its heart, a role-playing game. Players are able to create custom characters that are unique in the world and interact with the community as those characters. This level of escapism and fantasy is a huge draw for many of their core users.

That is why the 4,228 WoW and Fortnite customers surveyed in the Value Maxtrixes shown, value highly the concepts associated with this escapism—questing, clans, character building—and are willing to pay highly for them.

Players can find community in the form of clans and groups, and that interaction keeps them coming back. Players can also go on quests and develop their character as a hero, letting them feel the success of their avatars. These features are part of what makes Warcraft so special, and what's made it such a big draw for the last fifteen years.

The pure, video game fun aspect of Warcraft is a solid add-on. The world is huge and open for player exploration, and combat is an enjoyable section that permeates the game. These add-ons help catch casual players and get them more invested, connecting them organically to those core community parts of the game as they play.

But with that core community willing to pay so much more, is this a viable way to use those add-ons? 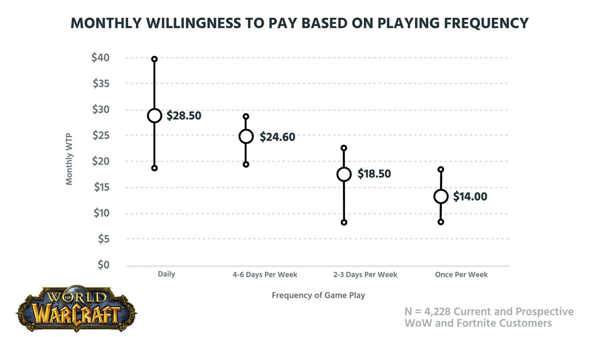 MMOs like World of Warcraft are notoriously addictive. And that's great news for them because it means they've created a product so fun that people will keep coming back to it and paying for it long term. The difference between casual users' and hardcore users' willingness to pay for the game is substantial.

The $14.99/month pricing is squarely aimed at casual users. The hardcore gamers must see the price as a steal for the amount of value they get from the game. At the high end, daily players are willing to pay almost triple the monthly subscription fee.

Warcraft is missing out on how invested their daily players are. Their pricing model is based on acquisition and focusing on pushing those weekly users into the daily range. But they could take advantage of the players who are already dedicated. By developing a premium subscription version for those players who are interested in it, Warcraft could pick up that additional money that their players are eager to give them. 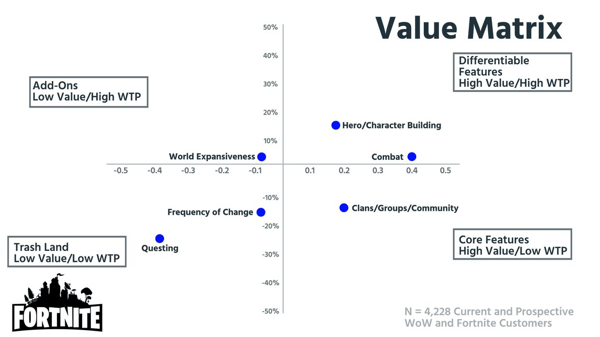 Fortnite is a “battle royale” style game. Characters aren't developed in the sense of a role-playing game, but exist to battle one another in one-off, multiplayer melee-style fights. Players have stats and rankings that they carry with them through different avatars and characters. Community is player-based rather than character-based.

Just because you can't develop your character's story does not mean that players cannot customize their characters. In fact, character customization is exactly how Fortnite makes money. They have an in-app store that allows users to convert USD to in-game points, which can be spent on various features. These features are unique in that they are entirely cosmetic, such as new skins and clothes for avatars or interesting animations and dances. The features in no way impact the gameplay, they're just fun.

But relying on cosmetic features means that there's a massively invested section of dedicated players who aren't being targeted as much as they could be. 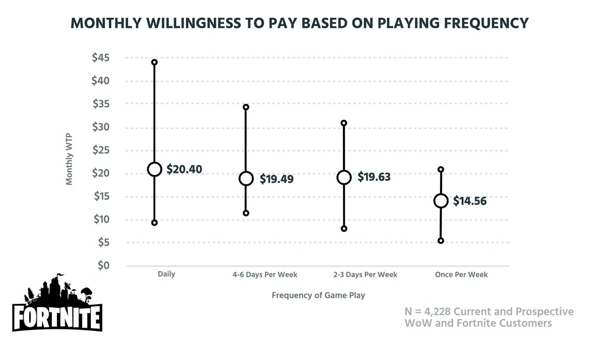 The median Fortnite players are willing to pay a very consistent amount across usage levels. This is likely reflective of the amount people are already opting-in to pay for those fun cosmetic features, since you don't need to be a hardcore player to enjoy those aspects of the game.

But serious players, much like with Warcraft, are willing to pay more than double what they're already paying to gain access to different, special features.

Creating a subscription system of any sort would not only make more dedicated users out of casual players, but could also net higher sums by unlocking higher-level features. Perhaps buying a subscription would open a premium store for players, or gain them a certain number of guaranteed monthly in-game points. In a game where these extra features are such hot commodities, this would be very attractive for serious players.

Both World of Warcraft and Fortnite could be exploring more effective ways to make money.

Warcraft would benefit massively by pushing more of their casual players into the daily use range, at which point their willingness to pay more goes up. They could offer more special features for users in that daily range, since that's the group most hungry for more.

Fortnite has done well being free to play, but could create any type of subscription model and benefit from it, especially since their daily players are very willing to drop more money.

Both games appear to be catering more to their casual player base, missing the opportunity to get more from their dedicated users, and leaving money on the table.