Stop Treating Churn Myopically; It's a Game of Inches

SaaS founders dread the "One Big Thing" that'll kill their company. We fear the bug that renders the product useless, the hack that destroys our reputation, or the new competitor that blows us out the water.

This isn't what kills you. SaaS companies rarely go supernova. No instead, SaaS death is slow and drawn out, inch by inch, play by play, till you're finished.

The battle against this is just as slow and deliberate—inch by inch. As Al Pacino put it, you have to claw with your finger nails for that inch.

But by making the fight for survival and against churn a game of inches, you turn it from a giant problem into a tiny one. All you have to do it fight churn one inch at a time and you'll survive.

Table of Contents:
1. The discrete nature of churn
2. The difference an inch can make
3. An ongoing, relentless process
4. The biggest battle of your professional lives

The discrete nature of churn

"The inches we need are everywhere around us."

There is no silver bullet. Each customer churns for an entirely different reason. If you get your onboarding spot on, you'll stop some churn. But there will be customers who get through your onboarding just fine, only to be stopped and churn out later down the line. Building features, making a great CS hire, getting the right customers—all of these will help, but none alone will solve. Each is just an inch in the right direction.

MRR Churn or User Churn isn't a single function you can optimize for. Instead, it is discretized. There are individual components spread throughout your product and company that each cause churn alone, or build up together over time to make customers choose churn. 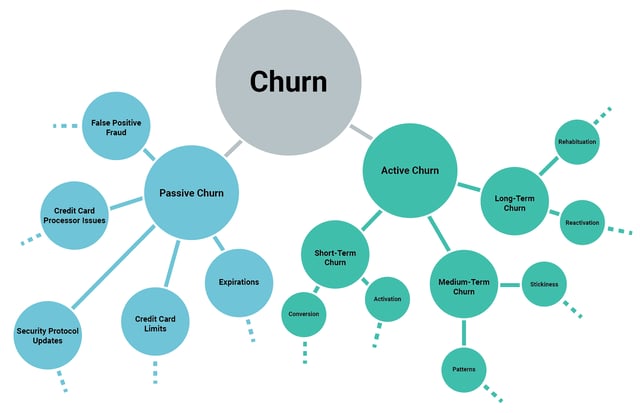 You can think of these under two large umbrellas: active churn and passive churn.

With active churn customers are making the conscious decision to leave. It could be your ineffective onboarding or bad customer service alone that drives them to make this decision.

More likely, it is a combination of many, smaller problems that built up over time. The onboarding didn't entirely suck but was vague. This meant your customer never got the most out of a confusing product. They tried to reach out to customer success, but they weren't as helpful as hoped. The combination of vague onboarding, confusing product, and unhelpful help all became churn.

With passive churn customers don't know they are leaving you. You are effectively making them leave. This usually happens through allowing credit cards to expire, so subscriptions don't renew. This can account for up to 40% of a company's churn rate, and fixing it is the simplest way to reduce churn.

Within each of these there are smaller problems, then smaller still, and on and on. The beauty of seeing churn this way is that “churn” is no longer a problem. You can't fight “churn.” But you can fight expiring credit cards. You can fight bad conversion flows. You can fight protocol problems. Inch by inch.

The inches you need to fight churn are everywhere around you, in every break of the game. You just have to find them.

The difference an inch can make

'One half-step too late or too early, you don't quite make it."

Fighting an inch at a time can seem relentless. SaaS companies want a big, bad churn monster they can see and fight. Kill it in one fell swoop and problems are gone and growth rains down. Making tiny, incremental steps in the right direction is noble, but not life-changing.

Except it is, especially within SaaS. Because of the magic of compounding, small differences in SaaS can accumulate into big disparities. What happens if there is just a 1% difference in your growth rate, spread across either side of zero? 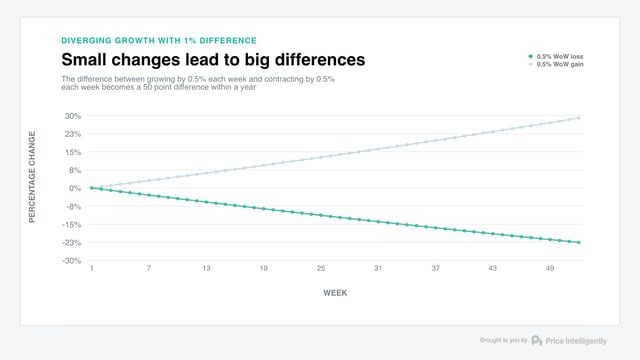 Everything—overall growth, revenue, churn—is affected by these small margins. One half-step can make the difference between living and dying. When you add up all those half steps, all those inches, they make a massive difference.

Looking back at the diagram above, you can see how this approach could work with passive churn. This involuntary churn is itself made up of smaller components (which themselves could be made up by smaller components). Fighting churn is too big a problem. Fighting involuntary churn is still a big problem. But tracking customer credit card expiration dates, communication charging failures to customers, keeping security protocols updated—all these are manageable problems.

Alone they just inch you towards your churn goals. But when you add them all up, they make a difference: 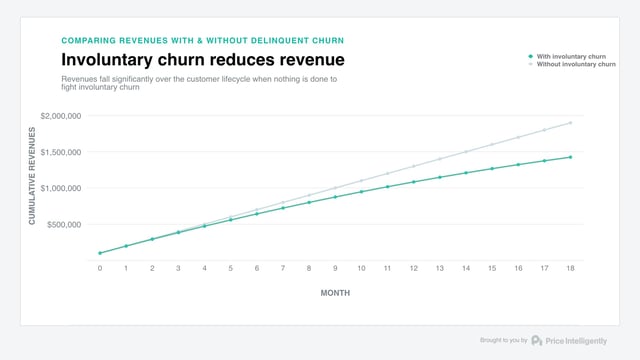 Making these small changes to involuntary churn rates, a company that starts with 1000 customers and charges $100 per month, will have $475,000 more after 18 months. The effects of fighting for every inch and the compound nature of SaaS means that as long as you are taking half steps in the right direction, you are going to succeed.

"On this team, we fight for that inch."

To succeed you need to break churn down into these inches. To do that you need to build a retention process that atomizes churn into its discrete parts and lets you fight each individually. Without a process, you'll be fighting blind. You won't know whether you are half a step too early or too late, or which inches are moving you in the right direction.

By using an experimental process to fight churn, you can make sure that everything you are doing, no matter how small, is moving you in the right direction.

An effective retention process is made of five parts:

Your goal is to cut churn. But as we've already seen, this is voluminous. You need to set discrete goals that match your ability to deliver change.

For instance, your main goal might be to cut involuntary churn by 50%. To do this, you need to set smaller goals that work towards this larger objective:

Each of these goals are achievable not only from a target-perspective but also practically. You can't fight churn, but you can figure out a way to warn people their credit cards are about to expire.

Once you have your goals, you can start to brainstorm ways to hit that goal. Taking the credit card expiry idea further, you (and your team—on this team, we fight for that inch) can think up ways that you can update credit card information:

In this part of the process, no question or train of thought is too stupid. You want to think up every possible avenue you can test and work out the practicalities and pitfalls of all of these.

When you have the question you want answered, you can set your hypothesis. What do you think will happen? This allows you to incorporate some scientific rigidity into your process. By deciding what you think the outcome will be, and assigning probabilities to each, you'll be able to gauge success during your experimental phase.

Then the fun part: testing. In this case, adding Retain to your billing system will allow you to test out each of these ideas. You need to run your experiment for enough time to get a large enough sample for some semblance of statistical validity. In testing you are looking for two things:

You also should just test one idea at a time. If you overlap experiments, then you won't know whether a drop in churn is due to one factor or the other.

Once the testing is done, you have two options depending on the outcome. Either, your test succeeded and you can incorporate the change into your product completely. Or it failed, so you can go back and refine your experiment, taking what you've learned to ask better questions and develop better hypotheses for your next testing iteration.

Either way, you'll have learned about why customers churn, and you can repeat your process on and on, finding each of those inches that are going to make the difference.

The biggest battle of your professional lives

"Either we heal now as a team, or we are going to crumble."

But inch-by-inch you can reduce your churn, grow your revenue, and grow your company. That's SaaS guys, that's all it is. Now, what ya gonna do? 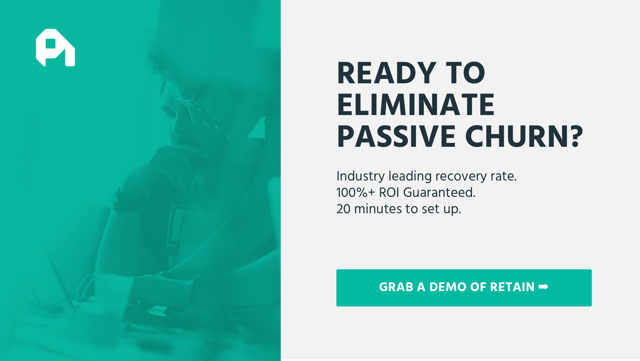 If you were super confused to the references, here's the original clip:

What is Daily Active Users? How to Increase your DAU and Minimize Churn

Customer Success in SaaS: How to Ensure Customers Stay on Board

Customer success is incredibly important to implement and measure when you’re in the SaaS subscription space. Don't risk losing customers early on.

Can NatureBox avoid the slump

In this episode of Boxed Out we're talking about NatureBox, a company that's revolutionizing the snack food industry with its ever-increasing focus on wellness.

Can Gillette On Demand's retention take on another century?

On this episode of Boxed Out we're talking about Gillette On Demand, a company that has become incredibly popular recently by bringing a personal and customizable shaving kit right to your door.