Selling an item is relatively easy. Whether it’s old clothing, a bicycle, or even baked goods, someone is usually looking for it. You don’t have to have an established relationship with them, these can be folks you’ve never met. Sure, you may not make mountains of profit, but in little to no time I’m sure you can hock your old stuff.

But, what do you do if your ambitions are larger than bake sales and junk removal? What if you want to start an actual business? You could open a brick and mortar, but then you’ve got property to manage and a lot more overhead costs. You can use websites like eBay or craigslist but it’s hard to rely on repeat customers when your items are stacked up against others on the same page. What you need is an ecommerce solution.

WooCommerce, BigCommerce, Magento — these companies are among a stacked lineup of business solutions that help you run your own online store. Online retail sales are expected to reach over six trillion dollars by 2023. But back in the early 2000s, one company — unbeknownst at the time — paved the way.

Today, Shopify has a market cap of over $30 billion, dwarfing the competition, but founders Tobias Lütke and Scott Lake had no intentions of transforming the entire ecommerce industry. The results of what they found provide valuable insight into anyone running their own SaaS business.

Shopify has forever changed the world of commerce and has made many entrepreneurial dreams a reality. Thanks to Shopify it has never been easier to start your own online business.

Born out of the necessities that came with launching their own online store, Tobias Lütke and Scott Lake created the ecommerce platform from the firsthand point of view of the customer. Today, they continue developing, growing, and expanding successfully. The secret? Their commitment to the success of their customers.

Make it all about the customer

You've likely heard someone say or read somewhere that in order for your business to grow and succeed you need to listen to your customers. Shopify, however, exemplifies just how true this is.

Its success stems from centering the entire company around what’s known as a mission metric. At Shopify everything revolves around its customers.

Everything from the design of the store templates to its pricing structure, and everything in between, is created in a way to help its users scale and gain more customers. Every development, feature, and integration has been in the best interest of Shopify's users.

Aligning business goals with customer needs allows you to develop and deliver the right value, in turn, fostering trust and building long-term relationships, all of which are crucial if you want to stay in business.

Let’s set the stage for the ecommerce world. To start, when we talk about ecommerce, we’re talking about the activity of electronically buying or selling products, or online services, over the internet. But commerce existed well before broadband and dial-up.

Starting with mail-order shopping, traveling businessmen in the mid-to-late 1800s began sharing their product catalogs wherever they went. The post office introduced rural free delivery in 1896, which set the American economy up for mail-order delivery. People could more comfortably live farther apart while still enjoying the fruits of their region's economy.

Mail-order delivery got another boost when phone lines became accessible to millions of people. This enabled faster ordering and in some cases you could even get next-day delivery (well before Amazon Prime). But it wasn’t until the 1980s, that eCommerce started to percolate.

The phone-line-powered Minitel system made it possible to virtually bring products into millions of people's homes. A precursor to the internet, Minitel enabled online orders to be placed via electronic messages sent via modem, but with only several million users (mostly in France), it was still quite limited in scope. It wouldn’t be until after the World Wide Web went public in 1991, that the first internet-based ecommerce businesses emerged.

Three years later, in 1994, Amazon rose to prominence. It began as an online marketplace for books, but quickly expanded to become “The Everything Store.” They saw growth by enabling customer reviews, which added a highly social element to its purchase process. Folks found it easier to trust someone who had already bought the product.

Amazon simply dominated the online retail space. And by 2018, it became only the second (after Apple) public company in the world to be valued at one trillion dollars.

But while it helps that Amazon was one of the first of its kind on the market, there’s a certain subset of customers it doesn’t quite work for — folks who wanted to start their own ecommerce site. Back in the early 2000s, two programmers would show us why.

Tobias Lütke and Scott Lake were burnt out and just wanted to focus on something they were passionate about: snowboarding. While neither had the talents of going pro or the ambitions of working at a ski resort, they found a different way to follow their dreams — an online snowboard store.

They dubbed it “Snowdevil”, a platform where they would use third parties to sell snowboards. But, Amazon wasn’t quite going to cut it. Lütke and Lake weren’t looking to hock old equipment put up against other competitors in the same window, they wanted to start a brand that people enjoyed using and trusted.

Website tools at the time, like Yahoo, Miva, and OsCommerce weren’t going to cut it either as they were too basic and restrictive. Tobias said, “The final straw was when I got a custom design made for my snowboard store and I couldn’t get it to work in Yahoo stores…” “…the customizability of Yahoo Stores barely allowed me to change the background color of the top frame!” Quickly, Lütke and Lake realized that they would have to build their store from scratch. 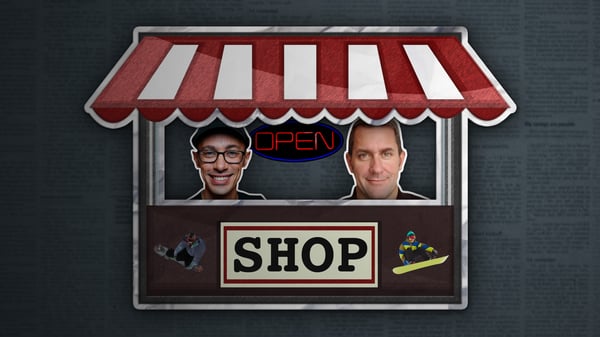 Once launched in 2004, Snowdevil was humming along. But something interesting was happening. The Ruby on Rails community, which was the framework that Snowdevil was built on, was much more interested in how they built the website than what the website offered. Sites like Amazon could function for the one-off sellers, but what Lütke and Lake were able to capitalize on was the desire of folks to start their own ecommerce business. By creating a subscription service, they were able to form a relationship with this demographic that would provide support and tools for them to thrive.

In 2006, along with Daniel Weinand, Lütke and Lake launched Shopify: a website designed to help merchants build their own websites. The site saw gradual growth, doing around $8,000 in sales per month. But real profitability came with a change to their subscription model. Before the change, Shopify’s billing was based on a flat rate system where, in addition to their monthly fee, every customer would pay the same percentage of every transaction. The change they made in 2007 resulted in the pricing philosophy we see today which ends up charging customers who are on higher tiers less than those on lower tiers. In other words, the more you sell, the less you pay. For more on Shopify’s pricing, check out our episode of Pricing Page Teardown on the matter.

But what were some of the other reasons Shopify found success?

User-friendliness is what Lütke and Lake wanted most. And rather than treat aesthetics and ease of use as luxuries, Shopify created a SaaS product that was innately faster, smoother, and more attractive than the other options. It’s designed to help you very easily build your online store and get it up and running fast by making powerful sales tools easy to use and accessible to everyone.

But Shopify’s success doesn’t stem only from the ease of use. It stems from centering the entire company around what’s known as a mission metric. At Shopify everything revolves around its customers — building their brands, increasing their sales and revenue, etc. Everything from the design of the store templates to its pricing structure, work to boost the GMV, or gross merchandise value, of their customers. When Shopify’s customers make money, it makes money.

Furthermore, and sticking to its customer-centric mission, Shopify’s integration with social media giants like Facebook, Twitter, and Snapchat helped Shopify's users connect with customers extremely quickly, which vastly improved customer-merchant relationships for all of its partners in one fell swoop. Now, Shopify is similarly leveraging social media relationships to facilitate digital-wallet purchases, which allows its subscribers to enjoy more streamlined purchases straight through their social media profiles.

Additionally, Shopify is helping businesses even offline. Its extremely easy-to-use point-of-sale (POS) system makes it so folks running a Shopify web store can expand into the real world once they have established business. Alternatively, it makes starting a brick-and-mortar business that much easier. We found, in a ProfitWell study, that in-person customer contact with a brand can boost willingness to pay between nine and 32%. It can also boost your expansion revenue by at least 10% and can climb to 30% for folks who have had multiple contact points. For more on this, you can check out this episode of the ProfitWell report.

Ultimately, Shopify’s example shows the importance of aligning business goals with customer needs. While its customers are not in subscription or SaaS, they provide a valuable case-study on which you can learn from to build your SaaS business. Shopify is offering customers exactly what Lütke and Lake needed when they were running an ecommerce business. By providing continual services, updates, and developing tools, Shopify is able to capitalize on this trustworthy relationship.

While one can still sell individual items on eBay or Amazon, Shopify has enabled anyone to create an ecommerce business on a whim. They’ve even partnered with Amazon to enable Shopify users to sell on Amazon, allowing customers to tap into this sales channel quite seamlessly.

Shopify has become a massive player in the SaaS and ecommerce space by making acquisitions left and right and continually updating its core offering. They may not be infallible, but hopefully you can take away learnings from the full spectrum of Shopify’s existence. What topic do you think we could go deeper on? Let me know in the comments down below.

Who's up next week?

Next week we take a deeper look at the Figma acquisition and what it means for SaaS.

Part of the way we measure success is by seeing if our content is shareable. If you got value from this episode and write up, we'd appreciate a share on Twitter or LinkedIn.

This is a Paddle production—the first media network dedicated entirely to the SaaS and subscription space.

Senior Show Producer at Paddle. Ben is a YouTube fanatic, contributing videos to the platform for 15 years, and amassing 2,000 subscribers to his personal channel. Prior to Paddle, Ben headed up the video team at Boston-based sports firm, CoachUp.

In this episode of Pricing Page Teardown, we're talking about Shopify, who's success stems from what's known as a mission metric. Is it enough to keep growing for the next 100 years?

How Skype blew a 10-year lead to Zoom

On our first episode of Verticals, we’ll walk through how the videoconferencing industry was formed, the early pioneers, and how Zoom capitalized on the mistakes of Skype.

Is the writing on the wall for DocuSign?

On this episode of Verticals, we dive into DocuSign's rapid growth, its sudden decline, and whether they'll be able to continue leading this multi-billion dollar industry.