Hefty fines and prison time. That’s what’ll happen if you don’t have your books in order. You need someone to prevent all the inaccuracies, outdated reports, and unverifiable data that ultimately makes your back office a living hell. It’s a job that often goes thankless. Thankfully there’s an entire segment of businesses that exist to help you out.

At the beginning of 2020, the accounting software market as a whole was valued at $11.9 billion. And it's projected to reach $70 billion by 2030. Several companies are jostling for the ultimate crown like Xero, Sage, and Zoho. But one company has been in the game longer than most.

Today, Intuit has a vast SaaS product line from QuickBooks to Mint, to their recent acquisition of MailChimp in 2021. But not too long ago, they endured a decades-long battle with Microsoft in an effort to win the top spot in bookkeeping.

At one point, the war seemed to be over before it could truly begin, but something happened that forced Intuit to fend off Microsoft in any way that only they could. The result of which gives folks running their own SaaS company many examples to learn from.

Managing business finances is not typically something most business owners look forward to, but it is absolutely necessary in order to run a successful business. In fact, improperly managing your financials will not only be a living hell for you, but you'll likely not have a business for long. There are serious legal implications associated with non compliance and/or improper record keeping. However, the complexities of business accounting are intimidating and are only getting more complicated with time.

Luckily, Intuit understood the intricacies of accounting as well as how the evolution and expansion of technology could facilitate this complex process. Intuit's ability to evolve and transform in line with customers' needs is what makes Intuit an undisputed leader in the accounting software market today, leaving Microsoft in the dirt.

Today, the flexibility of reporting features in some modern accounting software tools allows you to stay compliant with the complex and ever-changing global tax laws. Payments expert Digital River predicts that within a few years, "nearly every tax authority will have some form of real-time reporting requirement and will likely have a way to plug into a financial system and collect information on a real-time basis." But it wasn’t always as easy as we make it at Paddle.

Accounting dates back thousands of years and has been used in many parts of the world from Mesopotamian civilizations to Italian accounting pioneer, Luca Pacioli, in 1494. But accounting as we know it today started sometime in the last century.

In 1983, Scott Cook went to Stanford University and placed an advertisement for a programmer position. While there, he bumped into Tom Proulx. Proulx agreed to write a simple check-balancing program for Cook. In his dorm, Proulx created the first Quicken program, which he and Scott used to launch Intuit. 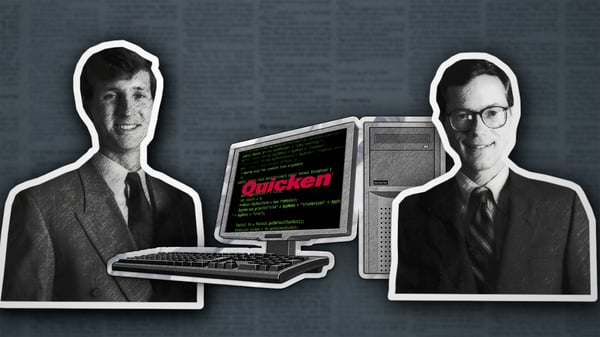 After a few difficult years of trying to popularize the product to no avail, Quicken's Apple version finally started to get positive attention. Consequently, sales hiked. By the late 1980's, Quicken had become one of the best-selling personal accounting software solutions around. Suddenly, Intuit had little problem securing financing. By 1991, the company's sales had skyrocketed to $55 million, up from just $20 million three years earlier.

In 1993, Intuit went public. By this time, Microsoft had launched their own product to compete with Quicken, releasing Microsoft Money in 1991. Realizing that Intuit was in the lead, Microsoft made an offer that they couldn’t refuse.

In October of 1994, Microsoft offered to purchase Intuit in a stock swap for $1.5 Billion. At the time, it was Microsoft’s largest acquisition ever. Speaking of the acquisition, Bill Gates said "Intuit is a phenomenal company and it is a unique situation where the sum is greater than the parts. Certainly managing finances, in the broadest sense, is one of the major opportunities that the electronic world will present. That is a major part of the future of software and Microsoft wants to be there."

This victory, however, would be short lived. The US Department of Justice sued to block the deal citing that it would effectively give Microsoft a Monopoly of the personal finance market. In their research, the Justice Department found that Intuit’s Quicken commanded 69% of the market, while Microsoft Money had 22 percent. Ultimately, Microsoft decided to pull out of the deal. During negotiations, Bill Gates reportedly told Scott Cook that if Scott fought the merger, he would use the sum that would have gone toward the acquisition towards battling Intuit. 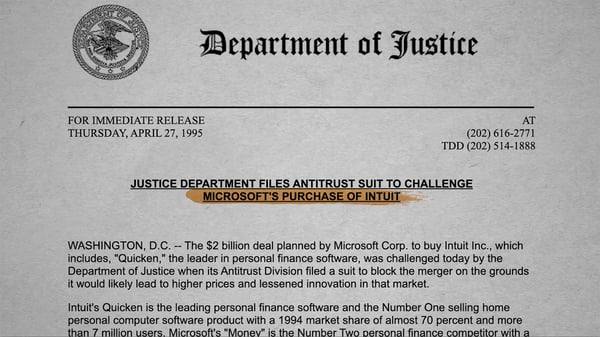 Microsoft went all out to try and dethrone Intuit. The company added a ton of partners, revamped the product's design, and tried to integrate a host of new financial planning tools.

Intuit, on the other hand, had the advantage of QuickBooks, Intended to offer small business owners the same flexibility, structure, and compliance as Quicken did for individuals. And in 2000, the software was improved to include audit trails, double entries, and other industry-level compliant items.

That same year, The Wall Street Journal reviewer, Walt Mossberg, gave Microsoft Money the edge over Quicken. However, even with this positive review, Money never truly managed to overtake Intuit.

Microsoft tried one last time, in 2005, to outmaneuver Intuit with the launch of Small Business Accounting to rival QuickBooks. But like all the previous episodes, the move backfired badly. "They've come up against Intuit six times in the past, and each time they have retreated with a bloody nose," Intuit VP Dan Levin said.

In 2009, Microsoft announced that Microsoft Money would no longer be available for purchase. Competition had been fierce but, ultimately, Intuit won out. It was somewhat surprising that Intuit succeeded, especially considering many computer makers pre-loaded Microsoft Money on new PCs. So, what were the key differences that made Intuit soar and Microsoft plunge?

The main reason Intuit knocked out Microsoft Money is because they continued to get closer and closer to the customer, including going above and beyond to correct errors.

In 1987, for instance, Intuit got complaints from Quicken customers who were only getting the message "getcache" on the screen when trying to record a transaction. This was back when Intuit was strictly an on-prem solution. Twenty thousand copies had already been sold. So Intuit staff created 20,000 bug-free disks and mailed one to every customer. As a result, customer satisfaction increased.

Additionally, Intuit has made it its mission to pursue strategic acquisitions that play to this overarching goal. Acquiring platforms like Credit Karma, Mint.com, and Mailchimp are aimed at solving pain points tangentially related to Intuit's core accounting offering. Credit Karma allows the company to give folks their credit score, which makes the product sticky. Mint is an automatic tracker of finances, which plugs right into Intuit’s tax software. Mailchimp is a fantastic tool that helps small businesses run more efficiently (For more on Mailchimp, you can check out our previous episode about how Mailchimp gets your email past the spam filter).

In 2011, further expanding on its well-rounded solution offering, the company also launched a platform called Intuit Anywhere, which allowed customers to try out different integrations within the QuickBooks Online ecosystem. Ultimately, this turned into the integrations Intuit offers today with options like Shopify, gusto, and even Etsy. Integrations are important —  in a ProfitWell study, we found that customers with more integrations within their product appear to be willing to pay between 10 and 30% more than those without integrations.

Another factor that helps Intuit stay fresh is they hold on to the startup mindset. They emphasize experimentation including encouraging engineers to use unstructured time to spend on projects of their own choosing. According to then CTO Tayloe Stansbury in 2013, about 300 of those projects turned into products or features of existing products. It’s simple, by encouraging innovation, Intuit is gaining innovation.

But perhaps the greatest reason Microsoft lost to Intuit is because of their efforts in marketing. Robbie Cape ran Microsoft Money from 1999-2001. He said “It really has very little to do with technology. What Intuit and Scott Cook were so formidable at was consumer marketing. He treated marketing Intuit very much the same way as one would treat marketing a bar of soap or bottle of shampoo. He made Quicken a household name.”

Today, over 29 million small business owners in the US use QuickBooks to manage their finances. Intuit didn't become the undisputed king of the accounting software space by luck. In retrospect, it's the company's desire to get closer and closer to the customer that got it to its current position. It was able to pull off this feat despite the heavy competition posed by Microsoft, a much bigger company than itself. Today, Intuit is comfortably one of the most valuable SaaS companies out there, with a market cap of $137.04 billion (as of 2020).

But, Intuit shouldn’t get too comfortable. There are still issues they must address within their products. Though Quickbooks is notable in the United States, the same can’t be said for the rest of the world. They have to watch out for folks like Xero in New Zealand, Zoho in India, and Sage in the UK. And while these companies have footings in their own countries, they are making waves abroad as well.

Additionally, the same marketing that turned Quicken into a household name got Intuit into some hot water in May of 2022. Their “free, free, free” ad campaign for TurboTax was found to be using deceptive tactics to drive low-income tax filers toward their services. This was instead of the free federally supported services, which this group qualified for. Intuit paid out a $141M settlement for this clever ad campaign.

Ultimately, a SaaS company that wishes to topple Intuit has to go a few extra miles beyond the incumbent. It must create a formidable relationship with customers and meet them where they are. What company do you think that will be? Xero? Sage? A newbie? Let me know what you think.

Part of the way we measure success is by seeing if our content is shareable. If you got value from this episode and write up, we'd appreciate a share on Twitter or LinkedIn.

This is a Paddle production—the first media network dedicated entirely to the SaaS and subscription space.

Senior Show Producer at Paddle. Ben is a YouTube fanatic, contributing videos to the platform for 15 years, and amassing 2,000 subscribers to his personal channel. Prior to Paddle, Ben headed up the video team at Boston-based sports firm, CoachUp.

Is the writing on the wall for DocuSign?

On this episode of Verticals, we dive into DocuSign's rapid growth, its sudden decline, and whether they'll be able to continue leading this multi-billion dollar industry.

On this episode of Verticals, we explore Mailchimp's bootstrapped beginnings, its impressive growth, and secret for avoiding the spam filter.