With the global economy looking jittery for 2019 and fake news still surviving and thriving, reliable sources of financial information are more important than ever. Whether you're looking for a brief daily update on financial markets or in-depth analysis on investment, you expect financial journalism to be transparent, clear, and accurate.

That's why in this week's Pricing Page Teardown, Peter and I pit two titans of financial journalism against each other—the Financial Times and The Wall Street Journal. Both publications generate hundreds of millions of dollars in annual revenue and have over a century of experience providing market analysis and news. And both are locked in the battle for digital subscribers in the new media era.

Let's look at their pricing to figure out what differentiators media consumers are willing to pay for and whether these two financial journalism juggernauts have pricing pages that live up to their storied reputations.

Media publications need to step up their pricing page game

The first thing you notice about The Wall Street Journal's pricing page is an aggressive discount offer of $1 for two months. The three subscription options—Classic Print, All Access Digital, and Print & Digital—are clearly laid out and paired with visuals on the UI that help readers understand what they're getting. 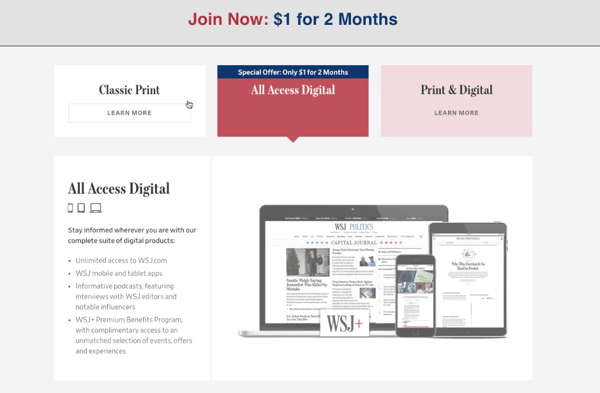 This is just the kind of clarity you'd expect from a publication like The Wall Street Journal. If we were in charge of the paper's subscription page, we'd continue that clarity through to the actual meat of the pricing plans. But that doesn't happen. Instead, things are about to get confusing.

When a potential customer picks a subscription—All Access Digital, for example—and scrolls down, they're not told the actual price of each package. Instead, the page emphasizes “saving.” 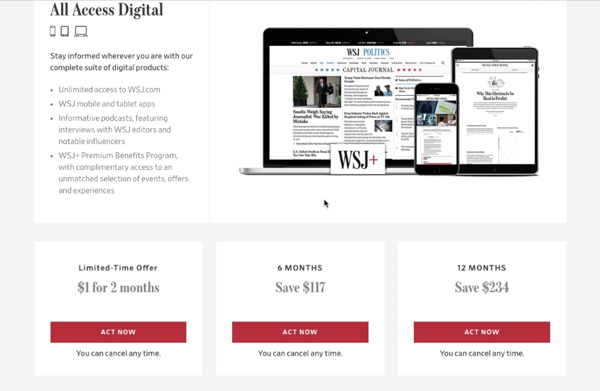 Saving $117 is neat, but what total price are we saving that money on?

Even when a user clicks on Act Now, the pricing remains unclear. We know it's $38.99 plus tax per month after the offer period, but the price during the initial six months is not stated. It's also unclear how frequently we'll be charged or the price after tax.

If a potential customer has to hunt for the real price, they're probably not going to sign up. Having the basic pricing matrix displayed upfront is pricing page design 101. By instead opting for a disingenuous pricing page design, The Wall Street Journal is failing customer expectations. 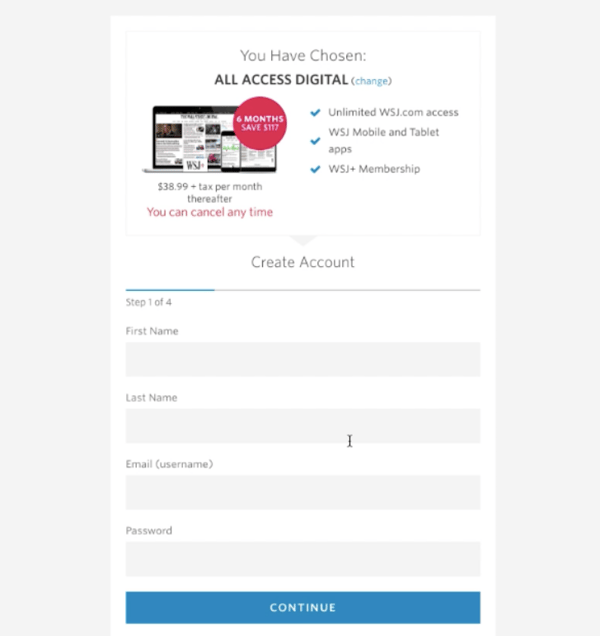 “I'm not even sure what my monthly price is, and this is a tactic.”

With a pricing page like this, The Wall Street Journal doesn't feel like it's serious about getting more digital subscribers. And the real value of media publications now lies in their online subscriber base as seen in the example of The New York Times.

The Financial Times, on the other hand, puts the weekly pricing on the main subscription page, improving on the WSJ's user experience. 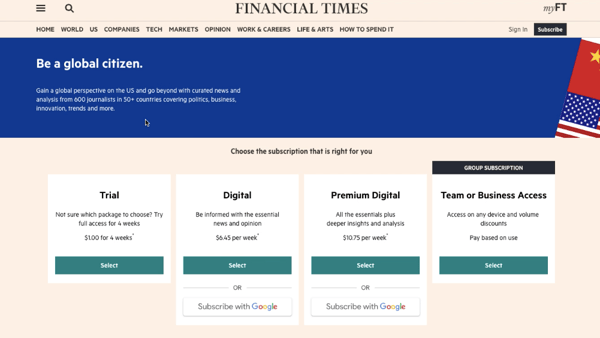 But things aren't all rosy with the Financial Times' pricing page UX. Potential customers are faced with several subscription packages to choose from with scant differentiation between the features of each package.

As psychologist Barry Schwartz points out, too much choice can be paralyzing. By presenting users with eight subscription options from the outset, the FT risks scaring potential customers off.

Once users do pick a subscription package and get into the sign-up process, confusion arises about payment frequency. The price is touted as $10.75 per week but is that paid weekly or monthly or annually? The majority of the subscription packages only let you choose between monthly and annual billing, and some force you into a yearly subscription upfront.

“There are so many choices. Even just researching this episode, it was exhausting to figure out what the prices actually were.”

Surprisingly, disingenuous or confusing pricing has become the norm for media subscription pages. Traditional media publications entering the digital space would do better to learn from digital-first outfits like The Information, which uses knowledge of the subscription economy and SaaS pricing strategies to build its subscriber base.

When we asked 4,108 current or prospective subscribers of The Wall Street Journal and the Financial Times about their willingness to pay for the publications, we found some big differences and some opportunities for the FT:

Willingness to pay goes all the way up to an impressive $90 per month for Digital + Print subscriptions, but the FT is setting its price points right at the bottom end of the WTP spectrum. It's great that it's defending its bases here, but it could be missing out on potential revenue with this plan. If it chose to pivot from a high acquisition strategy and adjust pricing upwards, it could relinquish some low WTP subscribers to competitors and go up-market.

The FT has benefited from experimental pricing strategies before, like when it saw a 600 percent increase in digital sales by dropping its price wall over the Brexit weekend. Experimenting with a higher-priced tier for consumers with high WTP may allow it to increase revenue without alienating subscribers. 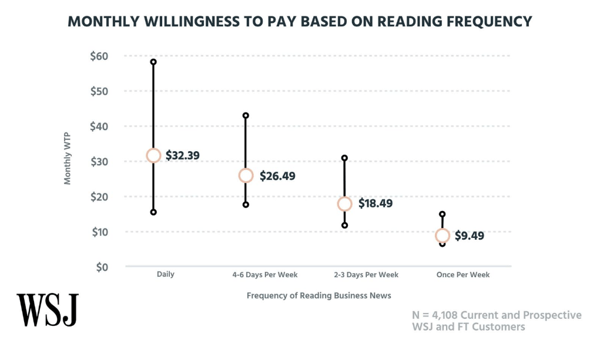 Competitors could pitch their subscription prices lower than The Wall Street Journal and find themselves more in-line with customer willingness to pay.

The Financial Times, on the other hand, defends its bases by setting prices towards the bottom of the WTP range.

Note that the people who read the FT once a week are willing to pay triple the price than those who read The Wall Street Journal once a week. That implies people feel they're getting triple the value from the Financial Times.

When we look at the different factors customers value, we can see why willingness to pay is higher for the Financial Times. 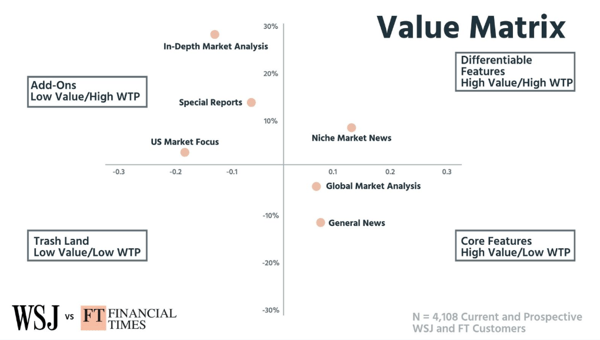 Niche market news—where the Financial Times shines—is a high value, high WTP feature. Other FT differentiators, like special reports and in-depth market analysis, may be low value, but they still come with a high willingness to pay. This means that the FT could go further in its experimentation and package these options separately for upsell value.

Room for improvement in both publications

Both publications are working off a high subscriber acquisition strategy. But to keep building subscriber bases, they need to make improvements to their pricing page design, strategy, and market positioning. In the competitive media space, standard features are not going to get subscribers through the door.

Design: Both publications need to move away from the broken model of media subscription pages and instead learn from SaaS subscription models like The Information does.

Better pricing understanding: The FT has the opportunity to experiment with higher prices among readers across the spectrum. Willingness to pay is high thanks to the niche nature of the publication, and it could potentially increase prices without hurting acquisition.

Better differentiation: The Wall Street Journal has become too generalized as a paper. The FT defends its niche and the willingness to pay, even as a Euro-centric paper within the U.S. media landscape. The Wall Street Journal has an opportunity to re-position itself as the go-to publication for niche U.S. market news, helping the publication compete with the FT among North American readers.

We'd love to hear your take. Now that we've been through this analysis, in terms of future prospects who do you think is better off, The Wall Street Journal or the FT? Tag us @PriceIntelligently or @ProfitWell using #PPT and let us know. We'll give you a year of service from the publication of your choice. Be sure to vote through the video as well!

In this teardown we take a look at niche tech journalism site Stratechery. They're bringing in a lot of readers with a simple and straightforward pricing strategy, but there are definitely some add-on opportunities for premium content.

I’m pumped to announce that we've acquired BTMetrics. These guys were the first to build a subscription financial metrics product for Braintree and we're incredibly excited to have them join the team.

In this week's episode, Patrick and Peter tear down the pricing pages and strategies of Bloomberg and The Wall Street Journal.