A new direction for the Apple of Fitness

When you hear Peloton, you probably think of this: 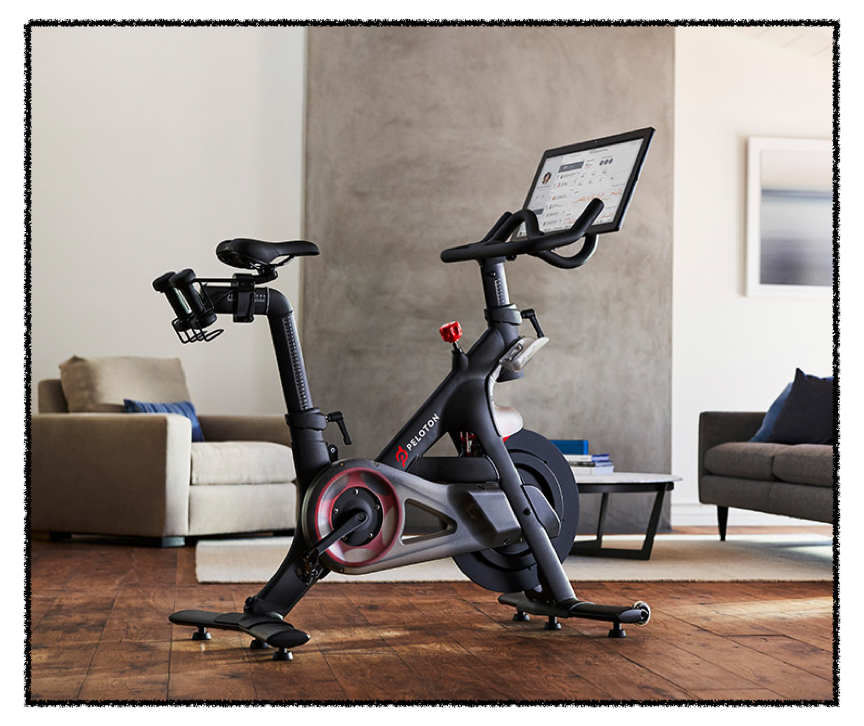 Equipment, namely their exercise bike, has been the primary focus of Peloton's branding and marketing efforts to date. Their value proposition of “connected fitness” is built on the foundation of high-performance equipment.

However, I believe that’s going to change.

Years from now, when Peloton has fulfilled their destiny atop the fitness iron throne, I believe their sustained success will largely be traced back to a series of pivotal announcements made in early December 2019.

Though not exactly viewed as earth-shattering at the time, these announcements signaled Peloton’s transition from a hardware company to a content company - a move that I believe is their key to fitness world-domination.

So...what did they announce anyway?

Get Good Better Best delivered to your inbox

On December 5, 2019, Peloton made three announcements:

A quick primer on what each app actually does...

Taken together, the news of a reduced monthly price for Peloton Digital, and two new apps that improve compatibility is a convincing step in a new direction. Peloton is decidedly making it easier and cheaper to access their classes without owning a piece of their equipment. These announcements suggest a different Peloton than the one we’re used to and have big implications across their addressable market, positioning, and product roadmap.

Historically, Peloton has targeted the healthy and wealthy. Look no further than the now-famous Twitter thread goofing on the bougie placement of Peloton bikes in their ads. The price change to their mobile app is a step in the opposite direction.

While it’s only a difference of $7 per month, this price change alters the competitive characterization of Peloton Digital. At $20 per month, their app was priced at a 25% premium to competitors like Nike Training Club and Aaptiv, but at $13 per month, its priced at a discount. This removes a key psychological barrier to a type of consumer they haven’t traditionally targeted.

Though the previous premium wasn’t egregious, it aligned with the high-end price points of their equipment and membership, likely acting as a hurdle to consideration from the price-sensitive crowd. Now, curious users are far more likely to at least give the free 30-day trial a try given the monthly fee is in line with other options.

Lowering the price for Peloton Digital is just one piece of the puzzle. Offering compatibility with third-party devices allows users to access classes with whatever devices and equipment they have. Since releasing the Fire TV app, Peloton has added apps for Apple TV and Android TV as well.

Using their own equipment along with the Apple Watch app, users can get closer to a full Peloton membership experience than ever before. In fact, after the announcement, some customers questioned the value of the membership altogether—31-year-old bike owner Jessica Skapetis wrote in a Facebook message to Business Insider:

"If this was the current situation when I was deciding whether to order I would not have ordered the bicycle and bought a high-end spin bike using the app instead,"

To be clear, the Peloton Digital price change took guts. It’s worth noting Peloton did this in December before COVID-19 made drastically discounted subscription rates the norm. Peloton’s faithful were not happy, and many wondered why there wasn’t a similar price change for the membership subscription as well.

Their willingness to draw ire from day-one customers signals that Peloton is serious about this move and willing to pivot from the “Apple for Fitness” label they’ve been given to a more hardware-agnostic strategy geared to get as many users in front of their instructors as possible.

Intuitively, this also means a change in positioning, which has already been underway.

Until recently, Peloton has anchored their positioning around connected fitness, emphasizing the integration between their high-performance equipment and elite classes. This is the basis for the Apple comparison, along with the fact that both companies center their marketing and branding around their beautiful hardware.

The December announcements align nicely with a recent shift in their positioning to classes on-demand. You can see this on their website as they now give their equipment and app equal billing, and center their messaging around classes rather than the exercise bike.

The Fire TV app was a big step in this direction, allowing users to access Peloton content outside the company’s equipment and apps. Shifting their focus from equipment to classes allows Peloton to address a wider market with a broader product. There are only so many people that will pony up for their hardware, after all.

While not a perfect parallel, this reminds me of Calm’s shift from meditation to wellness, which enabled them to serve a much wider user-base. Peloton's combination of performance hardware and elite coaching talent made them an aspirational brand, and now they’re taking that reputation and extending it across a wider landscape than just cycling and running.

The Peloton Digital app offers classes across a range of categories, featuring programs and collections that provide cross-category workout recommendations to give users a balanced fitness regimen. Given the stellar reputation of their cycling instructors, they’re well-positioned to gain a foothold across other categories and develop celebrity instructors in other disciplines.

At their core, all of these at-home fitness apps are really content companies. Price being equal, class quality is one of the most important deciding factors. Members have always raved about Peloton’s elite instructors. By lowering the price and increasing compatibility, Peloton is democratizing access to their coaching talent, making for a rare combination of aspirational, affordable, and accessible classes. This bodes well for their chances in this competitive landscape and gives them new levers to pull on the product side.

Historically, consumers have viewed Peloton as a membership that you have to go all-in on. Simply put, the bike isn’t worth it unless you use it a lot. The data backs this up - in their most recent earnings report, members averaged ~18 workouts per month! 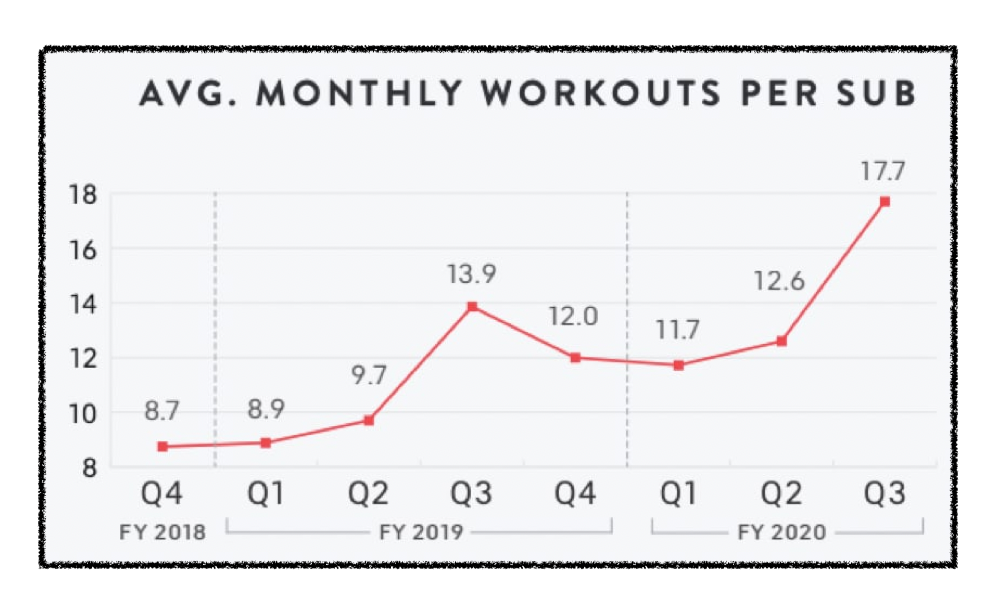 Peloton Digital has traditionally been viewed as a complementary offering for members - giving them the ability to switch up exercises so they don’t get tired of the bike or tread. The idea of attracting Peloton Digital users outside of the connected member-base has been an afterthought. Until now…

The new price and compatibility give users a much more reasonable entry point into the Peloton ecosystem. No longer does Peloton have to be “all-in” or bust. At $13 per month, it’s not only cheaper than competitive offerings but also cheap enough to subscribe alongside other fitness subscriptions like OrangeTheory or Barry’s Bootcamp. This studio-fitness customer cohort is an especially ripe market for Peloton, and the price point makes it feasible to work a Peloton Digital subscription into their fitness stack - if they choose to go back to their studio of choice at all...

As the Peloton Digital subscriber-base grows, Peloton will collect data that will help inform future investments. They can determine which classes to develop further, which instructors to anchor programming around, and even assess whether it makes sense to develop new hardware based on the workout trends they’re seeing.

It’s also easy to see a future where they differentiate an upgraded version of Peloton Digital that incorporates personalized data and benchmarks without the equipment, a "virtual personal trainer on-demand” if you will.

Broadly, these product possibilities mean Peloton can reach a far wider market than they’ve ever been able to, opening the top of their funnel to new users and allowing them to utilize more products within the Peloton ecosystem over time.

My wife and I were hardcore OrangeTheory members before quarantine struck. In the absence of classes, my wife tried Peloton Digital and loved the guided outdoor running sessions. When the trial was up, she promptly upgraded to a paid subscription.

We’ve talked about our new reality assuming things go back to normal, and she’s already set on cutting down her OrangeTheory membership and replacing some of the classes with Peloton’s. Who knows how that will evolve over time? Maybe one day I’ll subscribe, and sometime in the future, we’ll even buy an exercise bike…

Honestly, I doubt it, but that’s beside the point! The point is that we don’t need to. With their new focus on classes, Peloton can bring a completely new type of customer into their ecosystem.

As they grow subscribers and continue investing in Peloton Digital, new monetization opportunities will arise, and most of them likely won’t require purchasing equipment.

Down the road, when someone mentions Peloton, I expect many subscribers won’t think of the bike, but something like this instead: 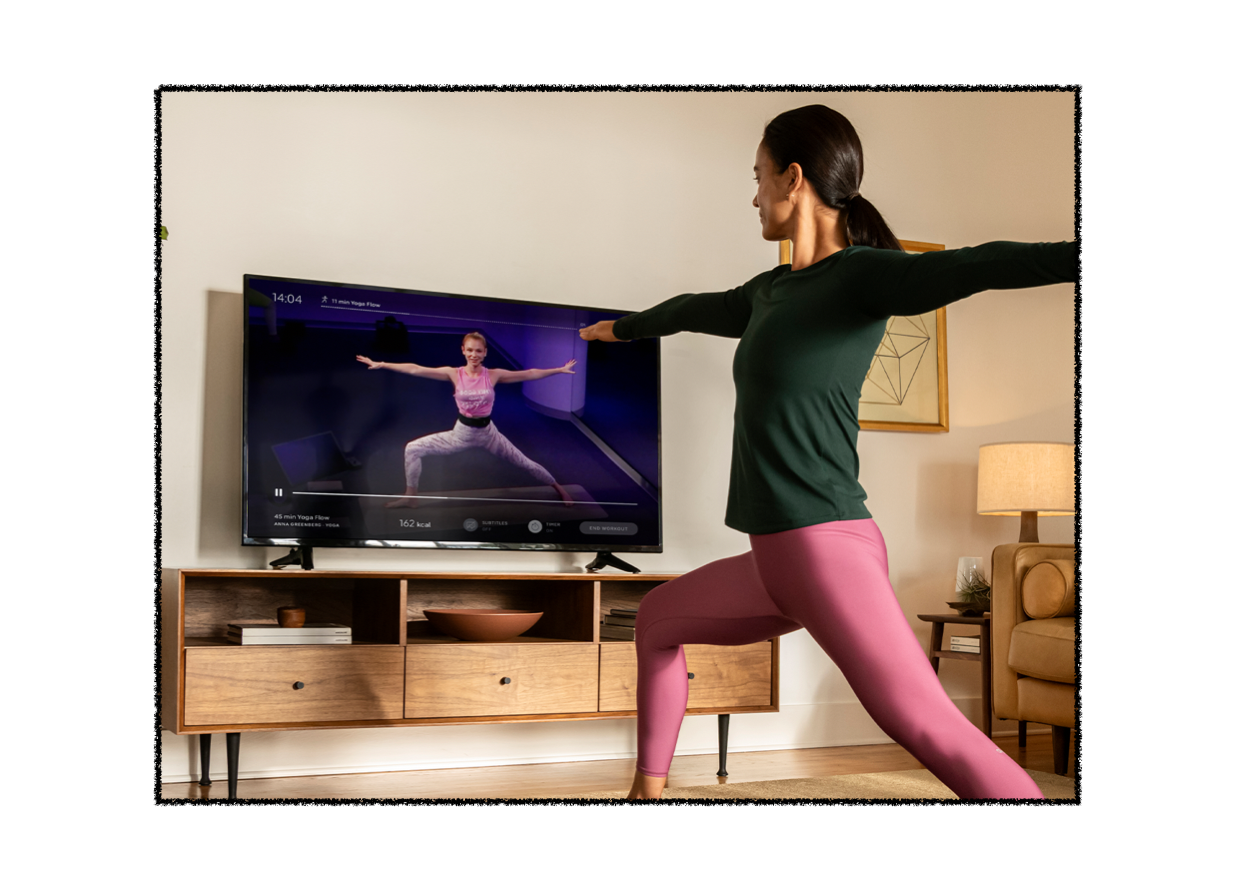 The direct-to-consumer business model is vastly different than traditional retail. We explore characteristics of top DTC brands and DTC trends.

In this episode of DTC Priced Right we're taking a look at Bulletproof—a company disrupting not only the traditional coffee industry, but the health and wellness market as well.

In this episode of Retention Talk, Knowledgehook's Travis Ratnam and team talk to us about onboarding, customer cohorts, and non-traditional CS.