Today, we’re subscribing to the man, the myth, the wizard himself: Harry Potter. We also connect with the Co-Founder and CEO of Chargebee on a RevOps drop. And I want to know: what are your thoughts on limiting Slack messages to public channels only?

Slack is back (in the spotlight)

Marie Prokopets from FYI tweeted a question that caught my attention, asking her followers: What are your thoughts on mandating that most Slack communication be done in a public channel?

We know remote work is on the rise, so communication tools like Slack (and the transparency put in place within them) are key to the success of organizations of this nature.

There were some points brought up in the thread that I am on board with, like this one from Jeff Nolan, who's "not a fan of mandating." He suggests we "lead by example" as a preferred approach.

Gary Walker, a consultant and product director, according to his bio, tweeted: “Unless privacy is absolutely critical, such as when discussing team finances or performance. Otherwise, ALL discussions should be in open channels. It’s natural for people to gravitate to private chats and DMs, citing interruptions and not being able to keep up as excuses.”

He believes that mindset is wrong, and that these types of people just need to configure their notifications properly. Perhaps I am configuring my notifications incorrectly, but I’m already so heavily present on Slack throughout the day, if there's a conversation that I’m not needed in, I say, take it elsewhere. 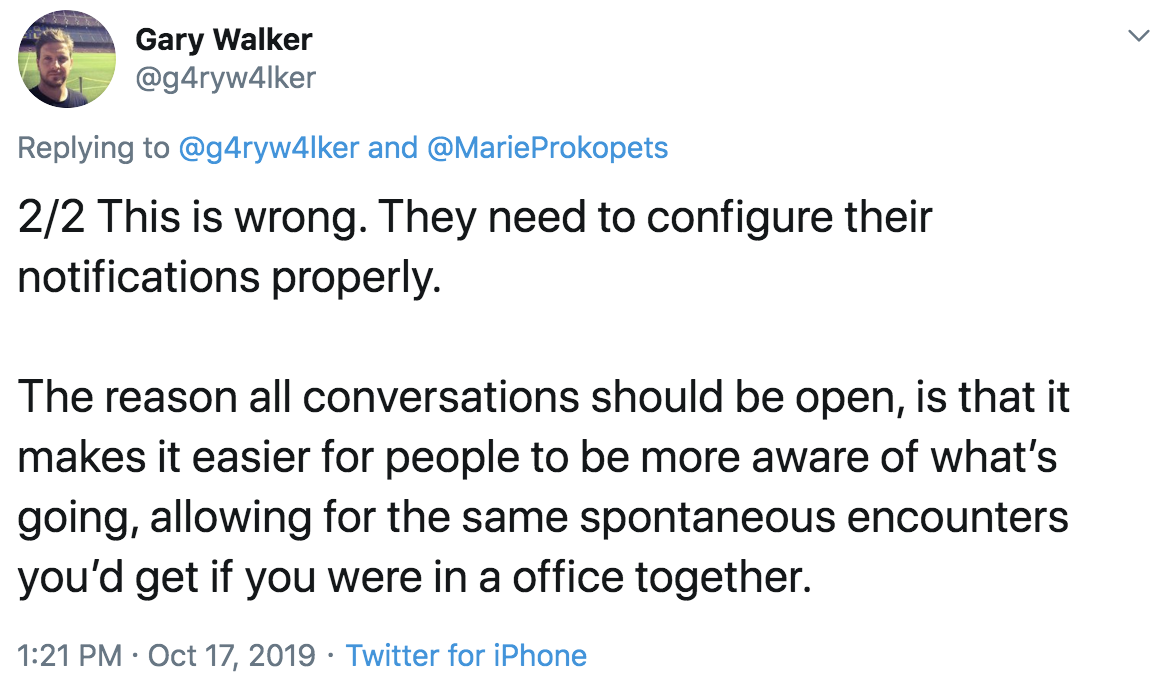 But Gary argues that conversations should remain open, so it's easier for people to be more aware of what’s going, allowing for the same spontaneous encounters you’d get if you were in an office together, and that using open channels for communication has the benefit of encouraging team members to help and support one other.

Although being fully remote does pose a whole different set of challenges. I can’t totally relate, because I have the luxury of working either in or out of office.

Zapier actually released a piece on fully remote teams, with its take as dependent on size.

“You’ll want to make use of channels in Slack. At a certain size, it can start to get noisy... so it makes sense to section off rooms into things like 'water cooler,' 'engineering,' 'marketing,'... but to hold off on this as long as possible when you're a small team.”

At around 10 people, the Zapier crew started creating multiple channels. They now have over 100. At the end of the day, though, for remote crews—it’s all about transparency. Carol Teskey over at GitLab, an operation run entirely remotely, can attest.

If you have experience with this, send me a note at abby@recurnow.com. I want to hear your input, because you know Slack... will always be back.

For more on Slack, check out our episode of Pricing Page Teardown that tears down Slack’s pricing page and strategy.

And now, we revisit the idea of subscribing to humans. A few months back we covered singer/songwriter David Archuleta tweeting about the drop of his own personal subscription, bringing to light the influx of potential for “subscribing to people.”

In season four of Pricing Page Teardown, Patrick and Peter looked to the same concept but with rapper Kanye West. A subscription service that could offer fans all the things they want exclusively from the artists themselves is a novel idea, to say the least.

But what if we told you, you could now subscribe to fictional people, like our man Harry Potter?

Apparently, Harry’s headed into platform 9 and ¾ and hopping on the subscription train, in the form of something called Wizarding World Gold.

The 12-month sub includes a ton—like access to all seven ebooks and a personalized, interactive journal, which comes bearing your name and Hogwarts house, surprise details throughout and "enchanted keys" that can be scanned with the Wizarding World app to unlock hidden content.

What would it take for you to subscribe to a human? Is this Harry Potter sub just a gimmick, or a seriously magical business move?

The Chargebee crew has news for us: they’re expanding their RevOps platform with new capabilities and enhancements for B2B as part of their fall 2019 release. New capabilities include support for quote-to-cash workflows, and for businesses selling to and based in Europe.

But the team reminds us that RevOps is not just about aligning marketing, sales, and success—but instead the coming together of all revenue-driving functions. Spanning marketing to finance, to plug revenue leaks and maximized revenue potential.

Integrations and enhanced support for Salesforce, HubSpot, Google Analytics, Stitch, Active Campaign, and many others enable functions across the revenue cycle.

Co-Founder and CEO Krish Subramanian says Chargebee's all about simplifying RevOps for SaaS businesses across the board.

"We call ourselves a subscription management and billing platform. Essentially, what we do is simplify the components in revenue operations."

And Vikram Bhaskaran, Chargebee Director of Marketing, speaks to the subscription shift specifically.

"There has been a massive shift in terms of subscription business and SaaS business in how they're trying to go and scale their revenue."

So that's where Chargebee is aiming to come in, to enable infrastructure for these businesses to get to that next level.

"Our core objective was to enable their revenue operations and help them plug their inefficiencies in their revenue cycle and capture new opportunities."

The team also sent us over The Revenue Operations Evolutionary Framework for SaaS for you to heed—so you can identify where you are today and start equipping yourself to scale.

SurveyMonkey CMO Leela Srinivasan is back in the spotlight as today's sapien. She powers the curious with survey tools and believes wholeheartedly that feedback is essential for growth. (And you know our ProfitWell crew is preaching just the same.) Today Leela shows us why she’s so hellbent on feedback for marketing success, and how starting her career in the shower cleaner business got her headed for greatness.

That is a wrap for your October 21 subscription rundown. Send your teammates to profitwell.com/recur/recurnow to sign up for episodes on the daily.

If you have news to share—from product launches to opinions on the stories we share—hit me up at abby@recurnow.com and let's collaborate. We want to feature you, our neighbors in the space.

You're being nonchalant about security

In today's episode of Recur Now, we look at data breaches and the newest member of the subscription class: speakers.

75% of your potential customers are leaving

In today's episode of Recur Now, the largest list of branded video shows and pods. All for you.

So much ROOM for activities

In today's episode of Recur Now, ROOM alters your workspace for productivity.

Content Marketers, You've Made it to The Good Place

In today's episode of Recur Now, we're amid an era of product-led growth and a streaming service OVERLOAD.