We’re tackling another big name in this week’s episode of Tradeoffs — music and audio content streaming provider Spotify. Hiten Shah, (FYI and Product Habits) and I sit down to talk through Spotify’s successes and think about what they need to do to maintain their leading position in the  market. It’s an interesting topic as, until now, Spotify’s maintained a singular focus on music discovery as their core value proposition.

With such a solid standing in a really competitive market, Spotify must start thinking further into the future about their brand. Many of the tradeoffs Spotify will have to make to stay in the No. 1 position are only tangentially related to their core value proposition. They do such a great job of nailing the customer experience already that any tradeoffs can only add value to the product.

Table of Contents:
1. The Tradeoffs
2. Music discovery helped Spotify build a strong base
3. Good product-market fit boosts engagement and trust
4. What are the related industries where Spotify can win (too)?
5. Spotify doesn’t need to do much to stay on top

Even though listeners have a myriad of listening choices, 42% of them don’t actually engage with the product every day. Spotify needs to find ways to pull in those users and increase customer engagement without alienating their core  base.


Freemium acquisition built a huge base of users who are monetized through ads. There are additional revenue opportunities outside of music streaming and discovery that can convert these users but will require Spotify to move away from consumerized thinking.


Spotify is known as one of the top curators of music and audio content. Much like Netflix has already done, they’ll need to differentiate their brand with original content as new niche streaming services flood the market. This will require changing how they think about commoditizing their product.

Spotify entered the streaming market at the perfect time. They were one of the first companies to convince record execs of the value of streaming music and, as a result, gained access to a lot of popular artists. With this access, Spotify built a strong recommendation and discovery algorithm that more or less cornered the market for them.

“When we started doing this research, I was talking with Marie Prokopets, my cofounder at FYI, who categorizes herself as a die-hard Spotifier. She says, ‘I’m into the fact that I’m introduced to new music every day!’ And it’s as simple as that for a lot of people.” —Hiten Shah

The data tells the same story. When we asked users What is a primary benefit you receive from Spotify?, the answers all line up with Spotify’s core value proposition.

It’s really cool to see how customers use the word “discover” in their responses. Spotify curates a weekly playlist called Discover Weekly, and that one-to-one language match is probably part of why customers see the product as a go-to platform for new music.

The other 33% of respondents that said “listen to what I want, when I want” and “playlists” tap into another one of Spotify’s strongest point: their user experience and interface. If you think back to how difficult it was to create playlists in iTunes, where you’d have to either buy every song directly or purchase the album and pick out the songs individually, Spotify’s simple one-click playlist creation is light-years better.

To that end, we asked Spotify users if they've ever recommended the product to anyone. And here's what we found: 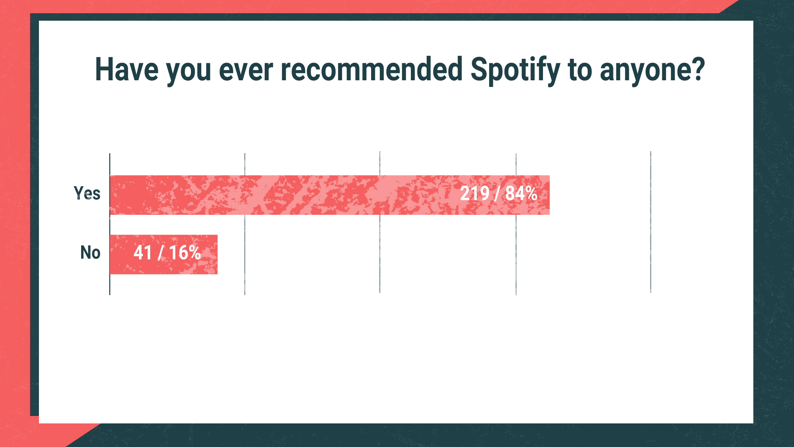 Eighty-four percent of survey respondents said yes, which is another positive signal for how effective Spotify’s product strategy has been up to this point.

They also have an NPS score of 46. 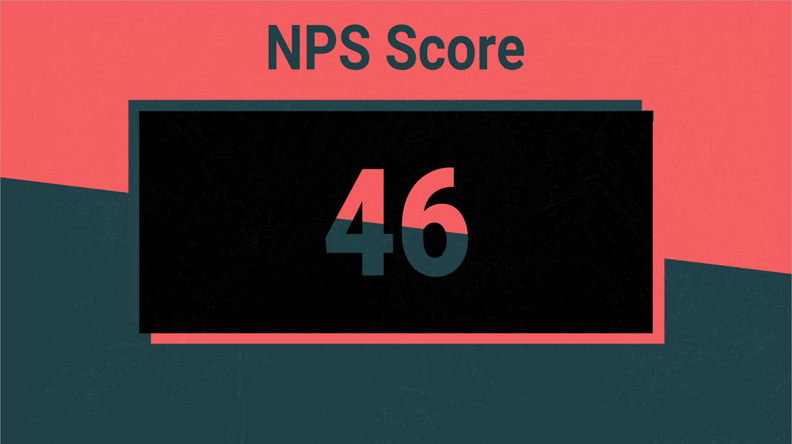 On a scale from -100 to 100 that’s quite impressive. It means that generally, users are satisfied. It’s also the highest NPS we’ve seen so far in the Tradeoffs series. Combine that with the qualitative feedback Spotify received from the primary benefits survey and the number of people who recommend the product to others, and Spotify is in a really great position to start playing around with their strategy and trying new things.

“I could not tell you what I would be using if I wasn’t using Spotify.”

Building a strong base of users who feel positively about their product helped Spotify solidify their product-market fit. When you’re in the market with powerhouse brands like Apple, finding that fit is paramount. With a singular focus on providing a seamless experience and encouraging users to engage with their service as often as possible, Spotify has created a customer base who trust the brand implicitly.

“The folks who have built this product have built an experience that people love.” —Hiten Shah

We see this trust in the responses to our product-market fit question, How disappointed would you be if you could no longer use Spotify? 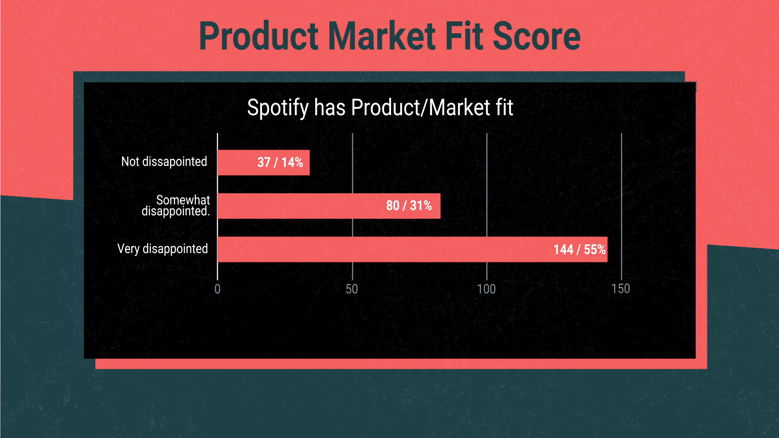 We’re looking for a threshold of 40% here, meaning that at least that many people should be very disappointed if they could no longer use the product. Spotify received a 55%, well above that threshold.

This just goes to show you how impactful their focus on music discovery as a part of the product experience has been. When we asked the follow-up question to see why people would be disappointed, there’s a ton of emotional language that speaks to how truly enmeshed Spotify’s product is in its users’ lives.

Spotify has done such a good job of building a product that fulfills a vital role in their customers’ lives that people can’t think of a world without it.

We see this when we asked people, How often do you use Spotify? as well. 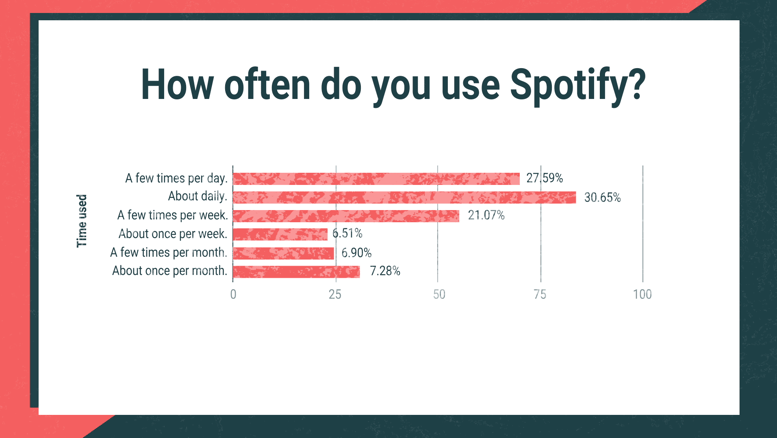 We can attribute these results to how Spotify has thought about the product and pricing strategy since its inception in 2008. That said, if they stay this focused on consumerized thinking, where they offer a single product at a single price point, it’s going to be difficult to keep up with the market. Growing into a multi-product platform is one of the potential tradeoffs they can make in the future. And while it won’t necessarily be easy, if they do it well, they’ll definitely position the company to stay on top.

What are the related industries where Spotify can win (too)?

Right now, Spotify is more or less a content company. They’re facing problems similar to those Netflix faced, but with the added difficulty of being a content curator as opposed to a content creator. With a recent acquisition of Gimlet Media, it looks like Spotify is going hard into the podcast market, but to stay on top of their game, they’ll need to find additional ways to expand their service as well.

Just think about their competitors — Apple is a behemoth with metaphorical hands in a number of important industries; YouTube has more or less cornered the video market and offers a streaming service of their own; and Pandora has been nipping at Spotify’s heels for years. Each presents a potential problem if they figure out the “next big thing” before Spotify.

When we asked customers, What would you use as an alternative to Spotify?, these are the players we saw:

That’s not surprising, but what probably causes Spotify some sleepless nights is just how powerful each of their competitors is in their own unique way.

“I worry about Apple. Whenever they create something, there are already 900 million credit cards on file and they can tap directly into basic network effects. While it’s not a great experience to purchase from Apple, it’s very easy for customers to do.”

To win out against these competitors, Spotify should start tapping into the tangential spaces in the market, which they can do by understanding what their customers want. We asked How could Spotify be improved?, and found a few areas where interesting things could happen

Lots of their customers said the product was Good as is!, which we know from the Evernote episode can be very frustrating for product managers. It also gives brands the liberty to try out new things. People are super passionate about their product and the access to music it provides, so taking on companies like Ticketmaster or Live Nation wouldn’t be outside the realm of possibility. Same could be said for taking on Patreon. It could even be cool to flesh out an ecommerce side to their product, offering up physical CDs, records, or cassette tapes in the same vein as Bandcamp.

With 70 million credit cards on file, all they need to do is reduce the friction to purchase. It could also help Spotify monetize their free users even more so, by giving them access to upsells and features that aren’t tied directly to the monthly subscription price.

I find it interesting that 23% of users said something about price. Thirteen percent wanted the service to be cheaper and 10% wanted reduced ads in the free version. That’s actually a decent threshold for this kind of feedback, so I don’t think Spotify has to really change anything with their price right now. It would make more sense for them to focus on the 7% of users who want different product-related features (like a sleep timer, etc.) and the tangential spaces we spoke about earlier. That’s the tradeoff that Spotify will have to make as they continue to evolve in the market.

Spotify doesn’t need to do much to stay on top

With such strong brand recognition and customer engagement, Spotify has lots of options for how to grow in the coming years. Whether it’s proprietary podcasts or a live music ticketing system, finding the right space to move into will definitely require some tradeoffs. The biggest one, in our opinion, is how they think about their product and pricing strategy.

Right now they essentially offer a single price point for family or individual users; there’s not much space in their pricing to differentiate these tiers based on features. Better personas and better targeting of those personas will help Spotify figure out the move that keeps their company on top.

This wraps up episode three of Tradeoffs. We’d love to hear your feedback, so let us know what you think about the new show on social media with #Tradeoffs. And share it with those who'd want in the know.

Transparency as a Mindset, Not a Business Model

In this episode of Tradeoffs, Patrick and Hiten take a look at how internal and external transparency result in tradeoffs for both employees and customers.