Spotify says they are ready to IPO. With $5 billion in revenue and 71 million paying users, the numbers definitely say they are. But potential investors need to look not just at the money the company is making but also at the money it is leaving on the table.

In this edition of Pricing Page Teardown, Patrick and Peter show that while Spotify's pricing might seem spot on, that single number is hiding a bigger issue. Concentrating on acquiring customers in the crowded streaming music market has meant that Spotify is missing out on monetization opportunities. While this might not matter now, if they want to sustain their growth, monetization matters.

There is a paradox in Spotify's pricing. Almost all of it is wrong, yet the final number is pretty much spot on.

The median willingness to pay (WTP) for Spotify customers is $10.04, almost directly where the $9.99/month main plan is. But when you look at the range of possible WTP price points, the picture of whether Spotify pricing is right or wrong becomes murkier: 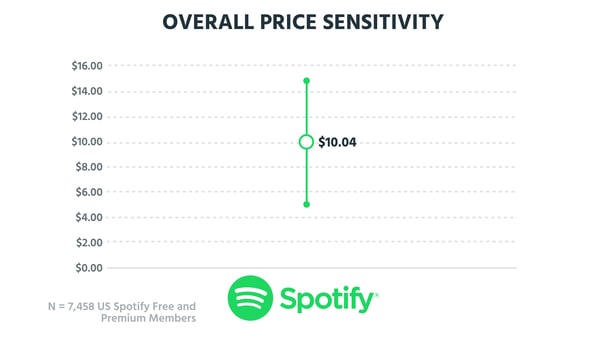 Some people only want to pay $5 for music, others $15. This is a surefire sign that the pricing is ripe for differentiation. But Spotify seems to be doing that almost completely wrong. Aside from the main $9.99/month Premium Plan, Spotify has two other payment plans:

The data show that the Student Plan is missing its mark. Students can get Spotify (and Hulu) for $4.99/month. That is a great price for access to more than 30 million songs.

But this demographic has a higher willingness to pay than their immediate elders: 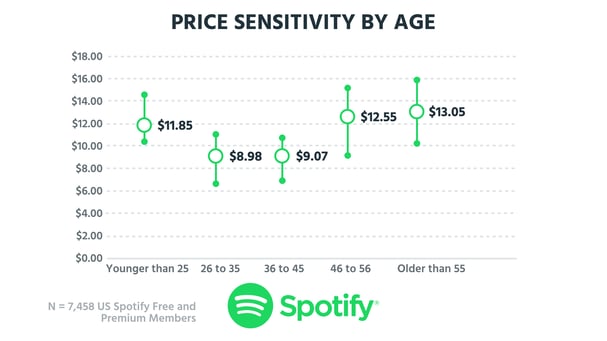 Most students are under 25, yet these customers are willing to pay double their current pricing. Again, this is a pure acquisition and retention strategy. Spotify knows that people will probably sign up for only one music-streaming service. By getting customers when they're young and then activating them on the service, they'll be less likely to churn and move to Apple, Tidal, or Prime when they graduate and the price gets bumped up.

The data show that it is those out of college and in the early parts of their careers who have a lower willingness to pay. Why? Patrick and Peter have the answer:

This is fascinating to me. This is us. We grew up not paying for music. We grew up with Napster, Kazaa, LimeWire. Basically, we have this hole in our generation where we are the only generation unwilling to pay for music. The only one in the history of existence.

Spotify is losing money on their Family Plan

But this doesn't absolve them of their other pricing misdemeanors. Their lack of feature differentiation is what is costing them money: 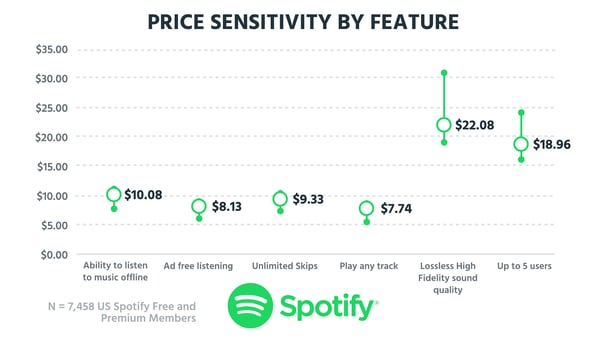 The features that are already included in the premium package—offline listening, ad-free listening, skipping, and the library—are all about the correct price point. But two features offer potential segmentation possibilities for pricing plans:

The price for the Spotify Premium Plan is $9.99/month. The Spotify Family Plan allows five users to access a single account for $14.99.

This makes the Family Plan an absolute steal. And Spotify customers agree.

Even Spotify knows they are losing money here. In Spotify's F-1 filing ahead of their IPO, the company acknowledges that the Family Plan doesn't contribute to average revenue per user (ARPU) as much as it should:

So why do they do it? They are concentrating on only two of the three pillars of growth—acquisition and retention. The low price point brings people in and, as the F-1 filing also shows, the Family Plan is helping to reduce churn at Spotify.

But by focusing on acquisition and retention, they are missing monetization. With a median willingness to pay $4 above their price point at the moment, Spotify could increase the plan price from $14.99 to $18.99 (or, even better, $19.99) without impacting churn. This could increase ARPU by 10–20 percent in one stroke. With such a massive customer base, such an ARPU increase would be a massive revenue boon.

Lossless sound quality isn't even a current option. Yet Spotify could spin this off into a unique offering and massively increase ARPU. The WTP for this feature is 2X the current pricing. The customers who care about this are a low percentage of the overall customer base, but with such a massive base, this is still a significant revenue opportunity.

Monetization is needed when acquisition runs out

Spotify has gone strong on acquisition. With rivals entering the market, the company also has to think about retention constantly.

Both of these factors are keeping pricing low. But eventually, acquisition will become more costly, and that is when you need to bring a strong monetization strategy to bear. At the moment, Spotify doesn't have one. With the IPO approaching becomes a bigger issue as once public, pricing changes are slower and harder.

Patrick puts it best when he talks about how disappointed he is in Spotify,

What frustrates me is there is a huge opportunity here. I think that because they have kept the pricing so simple and they haven't really experimented with it as much as they possibly should, they are missing out.

A lack of experimentation means that they have wedded themselves to a single price point and all revenue is attached to that. If they open up to the idea of trying new pricing tiers, such as with lossless quality, or raising prices to match willingness to pay, such as with the Family Plan, they could be in a position to dramatically increase their revenue for almost no extra effort.

But with the IPO coming, that experimental phase might have passed them by.

We designed a pricing experiment with nearly 30 thousand different subscription consumers across B2B and B2C to find out how case studies and customer stories impact willingness to pay.

Psychological pricing is a common marketing tactic and pricing tactic, but does it actually work on consumers?

Can Spotify keep their music throne?

In this episode of Pricing Page Teardown, we're talking about music juggernaut, Spotify, which revolutionized the music industry, breaking the chains of the labels and making unlimited music, free.

Paul Lynch on the importance of knowing your value

On this episode of Protect the Hustle, Paul Lynch discusses the future of value-based pricing and how the consumer is always in pursuit of value.