So we're uncovering the data on sleep and its correlation to your business' growth, as well as your overall happiness.

How is the B2B SaaS market trending?

How are churn and new revenue trending over time?

We may be a bit sleepy, but it looks like the B2B SaaS world is still cranking. We see positive percent change across the board today, with the overall index change over the last seven days up from 1.03% to 1.08% and MRR Gain—i.e., upgrades and new revenue—up from .59% yesterday to 1.09% in the last 24 hours.

Remember to check your subscriber newsletter regularly for everyday updates.

You can also share the data with friends and fellow industry players that could use it right now. Send me their email address to abby@profitwell.com and I’ll get their name on the list. Or they can subscribe directly at index.profitwell.com

Deep dive (back into bed, that is)

I keep waking up in a cold sweat, heart racing from eerily realistic nightmares. And I wonder to myself—what have I become!?

But it turns out, I’m not alone here.

Apparently, anxiety-ridden sleep and dreaming is a real thing. And it's a real problem right now. 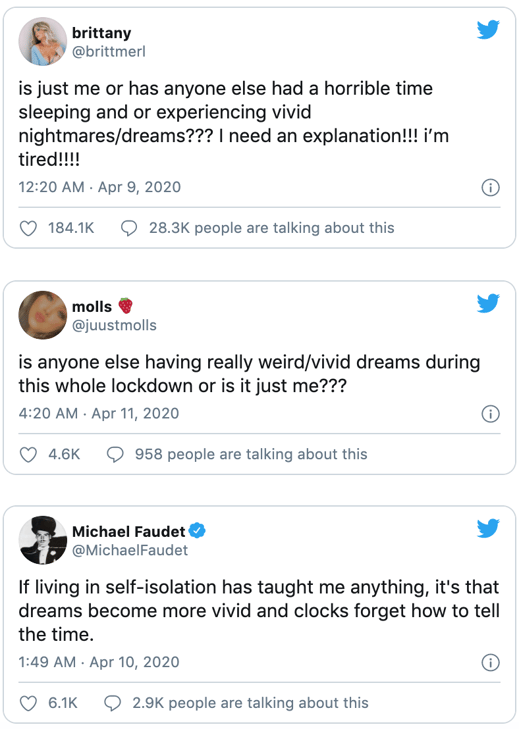 Twitter is riddled with tweets about the influx of vivid dreams amid the pandemic. And a recent “dream survey” conducted by Deirdre Leigh Barrett, an Assistant Professor of Psychology at Harvard Medical School, solidifies that the occurrence of vivid dreams has increased as the virus has spread around the world.

So I was pretty pumped when I caught wind of this sleep guide, published by the Skimm's daily newsletter. Because their team can attest: Better sleep correlates to better memory, energy, metabolism, and (I'm thinking) sanity at this point.

I also read a bit about this concept in regard to The Huffington Post Founder, Arianna Huffington, who collapsed from exhaustion back in 2007, resulting in a serious wake-up call—(ironically, to go back to bed). Sure, it might sound easy for a famous/jet-setting CEO to say, but proper sleep is treated as more of a luxury for many workers of the world.

“We now have the most amazing science that proves without doubt sleep deprivation affects every aspect of our health and our productivity."

Our ProfitWell crew has also found intrigue in the topic. So we analyzed the data from 400

subscription companies in the context of their founder’s sleep habits. And from a growth perspective, the results are quite interesting. 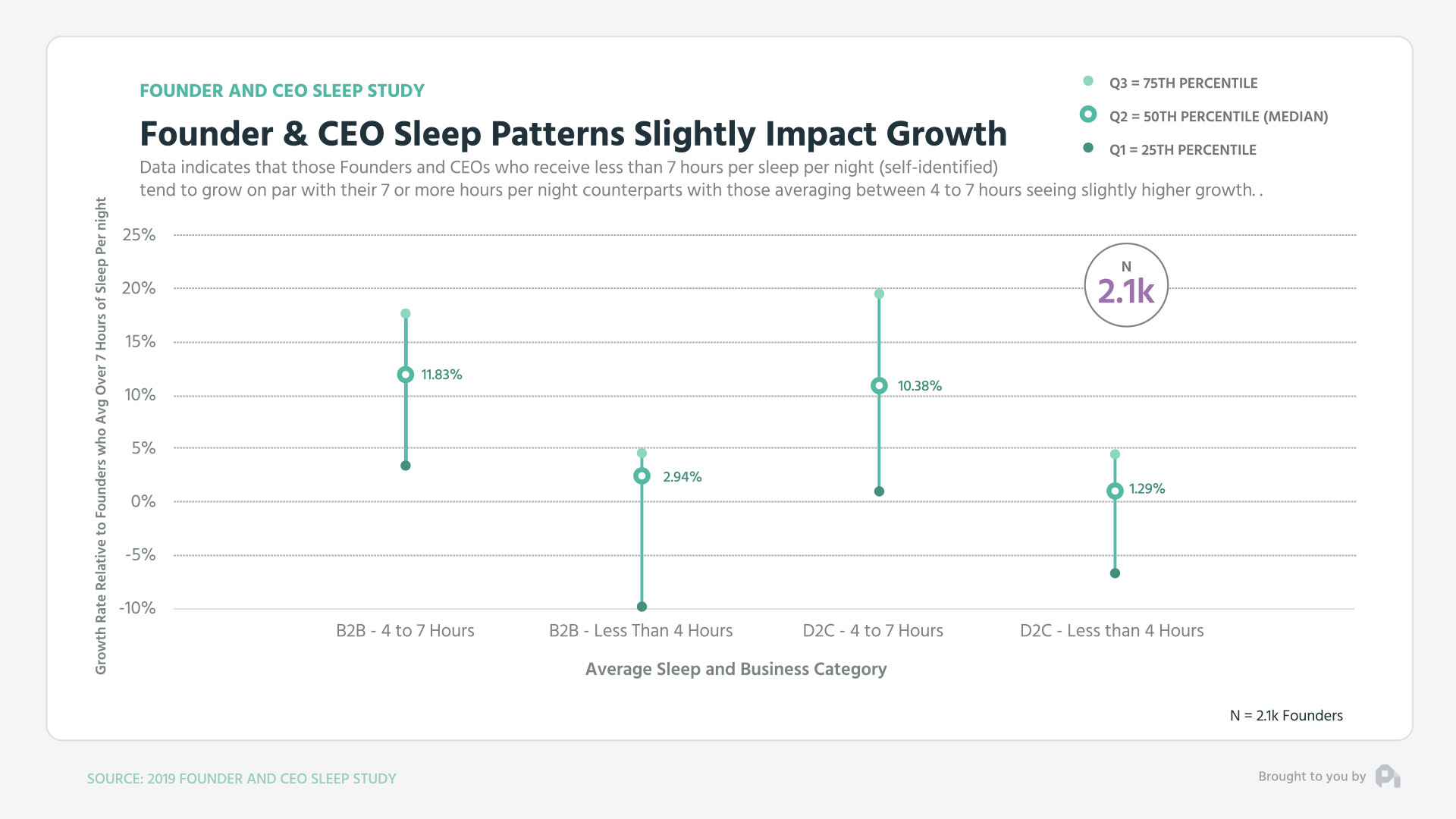 Note that founders of companies who were averaging four to seven hours of sleep did seem to have higher growth rates than their more restful counterparts, but the gains weren’t considerable, topping out at 12% higher on a relative basis at the peak.

Companies helmed by founders receiving four hours or less per night were essentially dead on with the founders who were getting the fully recommended allotment of sleep, and within the interquartile range, they were actually trending to grow at a lower rate.

So, how do you actually become better friends with your pillow?

The Skimm team knows that counting sheep and "avoiding" your phone doesn’t always play out as it should, so they list a whole slew of tactics they’ve been sitting on. A few I liked:

Be sure to share your own tactics with me, to abby@profitwell.com. The more niche, the better. I want to hear them all.

But wait, the (sleepy) plot thickens...

The story gets a bit more interesting here when we look at founder happiness in the context of sleep.

We measured a founder net promoter sore (fNPS), which essentially looked at how likely founders were to recommend becoming a founder to others. 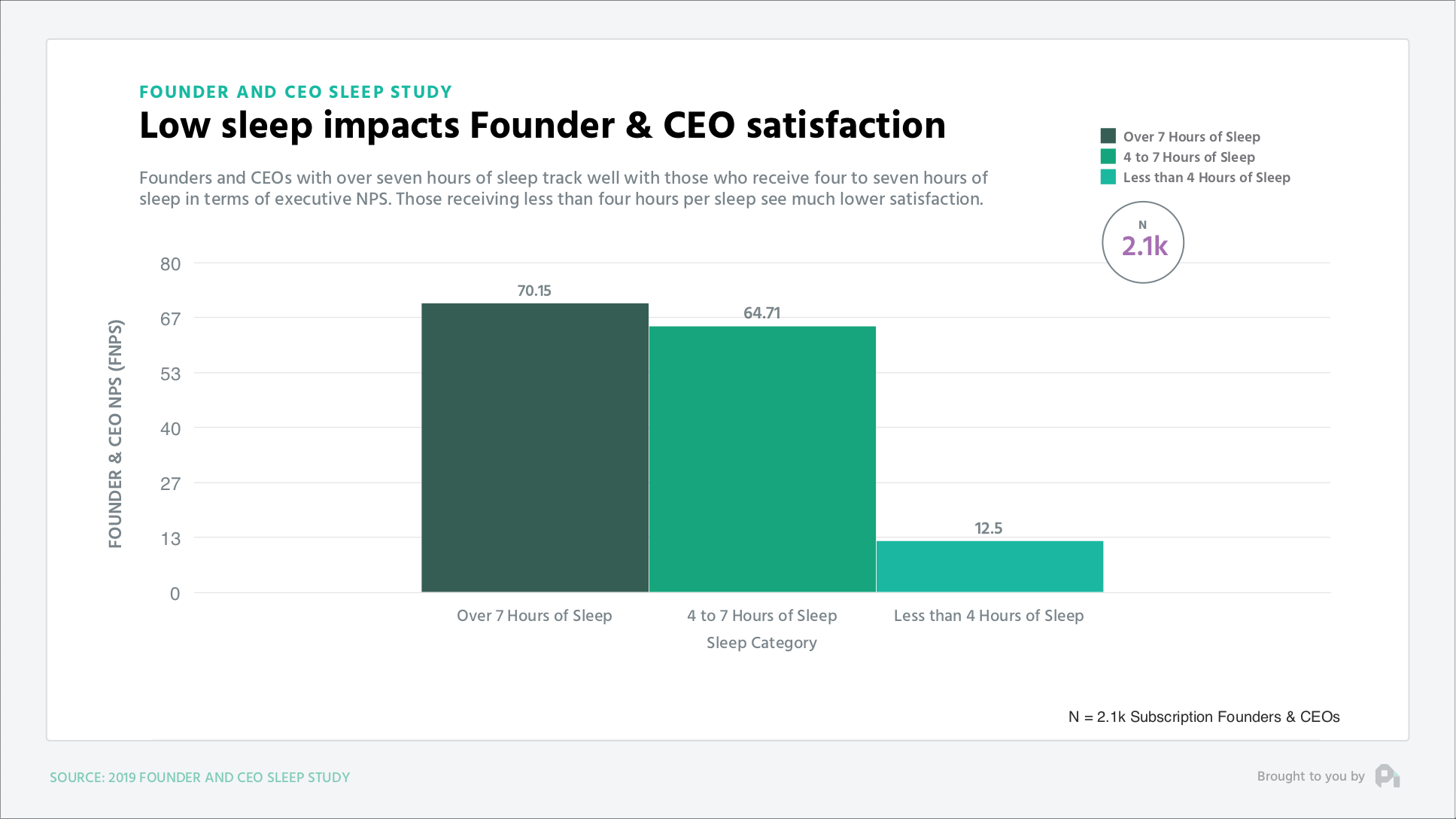 We found that individuals getting the most sleep had the highest fNPS with a score of 70. They were very closely followed by those founders averaging four to seven hours with a score of 65. But individuals receiving four hours or less nightly had an fNPS that plummeted to 12.

This data is highly qualitative with lurking variables—and definitely has limits.

There seems to be an indication that losing some sleep, which you’re bound to do as a founder, does have advantages. But, of course, if you go too far and get even less sleep, your well-being is going to hit rock bottom and you’re not going to gain the growth tradeoffs that you think you will by sacrificing your health.

All that being said–you have to keep in mind that building a company is a marathon that often appears to be a sprint. You do need to move quickly, but you also need to be doing things that are purpose built for the long term. Here's a link to all data cuts of our founder sleep study.

Happy snoozing (and ideally, a bit more of it).

Today's featured user is The Sufferfest—the complete training app that unlocks performance potential. Because perhaps adding physical fitness into the mix will also get you snoozing a bit more soothingly.

The Sufferfest offers science-based cycling, running, yoga, strength, and mental training workouts and plans, built for cyclists, triathletes, and other endurance athletes. The Sufferfest motto stands by focused performance, releasing, rebuilding, recovering, and riding stronger and longer. And they're full-speed-ahead during the current crisis, with copious offerings to keep you moving.

Here's a link to access your two-week trial. See how far you can go.

There you have it, your Wednesday episode of Recur Now. Catch you right back here tomorrow.

As a reminder: We launched a weekly version of Recur Now, an abbreviated newsletter with the best in each week’s news. If you want in on that instead of your daily version, reply to me at abby@profitwell.com and I’ll get you on that list.

If you have news to spread or resources to share with our audience, you can always connect with me at abby@profitwell.com to get the good word out there.

In this episode of Recur Now, we're balancing your cold outreach with something... a little warmer.

What Are You if You're Not Loyal?

In this episode of Recur Now, we're spotlighting: loyalty.

You're Speaking My language

In this episode of Recur Now, considering your employees could be your best investment.

Getting Down On Upsells

In this episode of Recur Now, what you're doing wrong to convert consumers into subscribers.