Revenue run rate—sometimes called annual run rate—is a financial forecasting method that lets you estimate how much revenue you might expect from your SaaS company throughout the next year.

Run rate is simple to calculate, making it quite popular among founders for revenue projections. That simplicity has its dark side, however. Estimating your run rate is inaccurate, failing to account for factors like expansion revenue or churn, so the numbers should always be taken with a grain of salt.

What is revenue run rate?

Revenue run rate (also called annual run rate or sales run rate) is a method of projecting upcoming revenue over a longer time period (usually one year) based on previously earned revenue. For example, if your business reported $15,000 in sales in the last quarter, your annual run rate would be $60,000. Run rate assumes current sales will continue, using that information to create projections for future performance of the annualized recurring revenue of a company.

Run rate uses current financial data to predict future performance. You can calculate your run rate using only a few months’ worth of revenue—this makes it a useful metric for fast-growing subscription companies like SaaS. Rapid growth means revenue data that's only a few months old could already be much lower than current or future revenue.

Of course, this simplistic method assumes nothing will change over the upcoming year. Churn, expansion revenue, upsells, and changes in growth rate are all conveniently excluded. This means run rate isn’t always accurate, but it is handy for predicting the future growth of your business and comparing the relative size of your business to other companies. For example, a SaaS founder might tell you they have a $5M business—they’re probably basing that on their expected annual revenue of $5M.

How to calculate run rate

Run rate is a fairly easy metric to calculate, once you have a few months of revenue data in hand.

Meet Company A, a rapidly growing SaaS company. It’s July, and Company A posted revenues of $25,000 in the month of June. To get their annual run rate, Company A multiplies June’s monthly revenue by 12, giving a run rate of $300,000.

Company A could also use data from a longer time period to calculate their run rate. Say they made $15,000 in April and $20,000 in May—that’s a total of $60,000 for the quarter. Multiplying the quarterly revenue by four gives a run rate of only $240,000, significantly lower than what we worked out based on the monthly data. 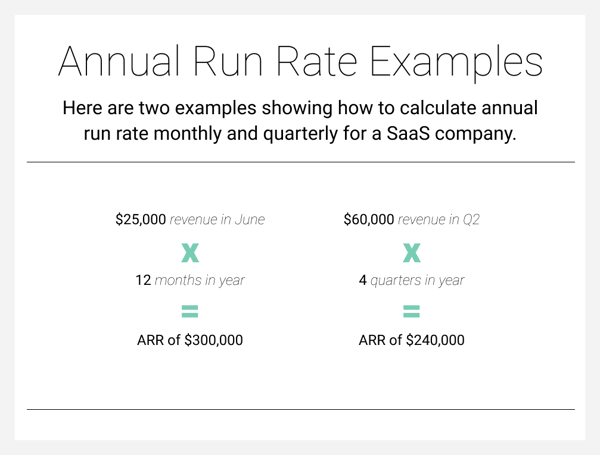 This highlights one of the problems with basing forecasts on past data—the numbers can change so quickly, estimates quickly become out of date. Let’s take a closer look at some of the risks of using run rate to forecast revenue.

Run rate isn’t always the most accurate metric. Like we saw in the previous example, if the month or quarter you use to estimate run rate is above or below normal, or if your revenue fluctuates over time, your results won’t reflect reality. Run rate also doesn’t account for churn, expansion, contraction, annual versus monthly contracts, or other factors affecting revenue.

Monthly sales can vary significantly based on seasonality, so a single month’s sales will not always accurately reflect annual sales or profitability. This variation can make your run rate calculations dramatically different if revenue was measured during the high season versus the low season.

Remember Company A? Perhaps, in January, they brought in only $12,000 in sales revenue—this would make their run rate a mere $144,000, less than half of what they estimated based on the data from June. Neither calculation is more or less valid—but one is likely much more accurate than the other. 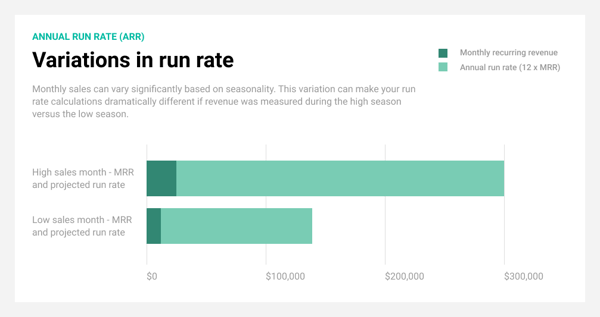 Unfortunately, this also makes run rate an easy metric for SaaS companies to manipulate—using revenue from above-average months can mislead investors into believing sales are healthier than they really are.

Say Company A lands a single contract in July worth $50,000, in addition to $25,000 in forecasted sales. Based off of July’s revenue data, their run rate would be a whopping $900,000, which, assuming sales return to normal in August, is far too high.

SaaS companies should typically scour their financial statements and exclude large one-time sales or customers with contracts that will expire during the forecasted period from their run rate calculations to avoid ending up with an unrealistic run rate.

The basic run rate calculation assumes company performance will remain the same throughout the forecasted period. Of course, things will no doubt change as the company grows—churn might increase or decrease, customers may be upsold or downgrade, or a new competitor might enter the market, stealing market share.

Let’s look at churn, since that more closely affects subscription businesses. Assume Company A had a 5% churn rate as of June, and growth was expected to be flat over the following year. Reducing churn to 4% will increase the expected run rate over the next full year, while increasing churn to 6% will likewise lower the run rate.

When is run rate useful?

Despite the inherent problems, run rates do come in handy in certain situations.

Run rates can be a helpful indicator of financial performance for companies that have only been in business for a short period of time. Since run rate can be calculated based only a few weeks or months of data, executives, investors, and venture capitalists can obtain a somewhat accurate measurement of the company’s expected performance, even if the company has only been in business a short time. Especially if the financial environment around the company isn’t expected to change significantly, run rate can be a valuable metric for early-stage startups.

Launching new products or services, restructuring existing ones, or embarking on cost-saving projects can all have a dramatic effect on the performance of a company. Run rates provide a steady benchmark metric that can be used to see whether or not the changes have improved the financial performance of the company. If your run rate is higher after making changes, great—if not, it might be time to go back to the drawing board.

Run rate isn’t just useful for building your pitch deck. Many startups continue tracking and reporting on run rates regardless of the growth stage they’re in. Run rate is an easy metric to break down—for example, sales reps can quickly track their individual run rate, making it easy to set KPIs. Be careful not to set future budgets based on your run rate, however, since you could end up overspending if your estimates are inaccurate.

Your run rate is a valuable metric for tracking the performance of your subscription company, particularly if you’ve only been in business for a short time. It’s a quick and easy way to get a benchmark on your revenue—but it’s also an easy metric to abuse and an easy metric to miscalculate, sometimes with harmful consequences.

If you’re going to use run rate in your business, use caution. Be sure to exclude one-time sales and seasonal variations from your estimates, and make sure critical decisions like budgeting aren’t solely based on run rate. Run rate gives you one more tool in your arsenal for growing a successful subscription business.

What is Revenue Operations & Why RevOps is Crucial for Subscription Businesses

Revenue Operations or RevOps for short is a crucial way for your business to keep quality customers and revenue in your sales funnel.

Revenue optimization with the help of pricing software can significantly improve your business performance and profits. ProfitWell can help you optimize revenue!

What’s the Difference Between Revenue and Income?