How To Ace Revenue Recognition? Examples to Learn When to Record Revenue

Picture this. You’ve just landed the biggest customer in your SaaS company’s history, adding tens of thousands of dollars to your income in a single sale.

After the cash lands in your account (and after you’ve cleaned up from the inevitable champagne-and-pizza party), you’ll no doubt want to update your accounts to reflect your newfound revenue.

Cash isn’t revenue. Even though the money might be in the bank, you can’t count it as revenue until you’ve earned it. Treating cash and revenue the same can be a fatal mistake for any business, whether it is a large, public company selling software or a local private company selling groceries.

So how do you know when to record your revenue, then, if it’s different for every business? To help you out ​​with this financial reporting issue, we’ve put together some revenue recognition examples that show how revenue should be realized for businesses of all kinds.

Before we get into the examples, though, let’s go over what revenue recognition is and the difference between revenue and cash.

What is revenue recognition?

Revenue recognition is a generally accepted accounting principle (GAAP) that determines the process and timing by which revenue is recorded and recognized as an item in the financial statements. The revenue recognition principle states that revenue should only be realized once the goods or services being purchased have been delivered.

The crucial difference between cash and revenue

The most important thing to realize here, particularly for SaaS companies, is that cash isn’t revenue. I explain the difference in more detail in this post, but in general, no matter when a customer's cash arrives in your bank account, you don’t count it as revenue until you have delivered the product or service that it paid for.

The remaining balance should sit in your accounts as deferred revenue until you recognize it since customers can ask for your cashback at any time if you haven’t yet delivered the service (and you’re under obligation to refund them if they ask!).

For most companies—retail stores, for example—this is a subtle difference since the product is delivered as soon as the customer pays for it. But for SaaS and other business types, knowing when to record revenue is more difficult.

For most companies—retail stores for example—this is a subtle difference, since the product is delivered as soon as the customer pays for it. But for SaaS and other business types, knowing when to record revenue is more difficult.

When is revenue recorded?

So if you don’t record the revenue when the cash hits your bank account, when do you record it?

Revenue recognition depends on the timing and sequencing of the two main events that make up any transaction:

Both events are independent. Retail stores, for example, handle payment and product delivery simultaneously, but for many businesses, one event frequently occurs before the other.

Let’s take a look at the three different situations in more detail.

This is the simplest example of revenue recognition—you deliver the product or service immediately upon purchase, and you record the revenue immediately. 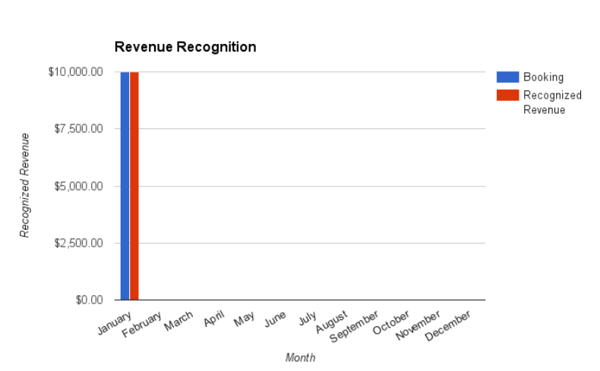 Revenue for one-time purchases should be recognized immediately.

This is most common with one-time purchases, like buying groceries or one-time software packages. Because the customer takes possession of the product immediately, revenue can be realized on your income statement in the same accounting period as payment was received.

After payment is received

It’s also common practice for companies to wait to record revenue until they deliver the product or service to customers. This should be familiar to most SaaS and subscription-based businesses—the customer pays upfront for a fixed period (usually a month or a year), and the service is delivered over that time period. 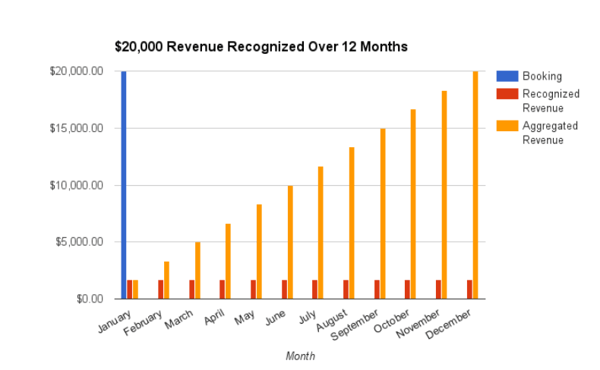 Even though the booking for the entire year is received upfront, revenue is recognized equally across the 12-month period.

If you get paid to provide a service for a month or a year, but you receive the money immediately, that payment should be gradually recognized as revenue. Each month that you provide the service for the prescribed time means recognizing an equal portion of that income until the service delivery period is complete.

Before payment is received

Last but not least, revenue can also be recorded after delivery of the product or service but before payment is received.

Companies don’t need to wait until payment is collected to record it as revenue. This is a key concept in accrual accounting and usually applies to service-based businesses like consultancies. A service performed in March, for example, should be realized on March financial statements, even if a client pays for said service in May.

I get it—wrapping your head around all of this can be confusing. The easiest way to explain when you should recognize revenue in your own business is by seeing it in action, so let’s look at a few revenue recognition examples.

Meet Company A, a software company selling an on-prem CRM package for enterprise customers. Instead of running a SaaS product, Company A delivers their software the traditional way - a one-time software package, installed on local hardware run by the customer.

Say Company A releases a new version in January, and the new version costs $10,000 upfront. If a customer purchases and receives the software in January, the company can book the sale and recognize all $10k of the revenue in the same month.

This is the simplest example of revenue recognition. Because the customer takes possession of the software immediately and runs it on their own hardware, the seller can recognize the revenue immediately. Retailers like grocery stores work the same way—revenue is recognized upon delivery, when customers buy their groceries.

Even with this straightforward example, though, it’s still important to recognize the difference between cash and revenue. That difference becomes more apparent in our next example.

Let’s move on to Company B, another CRM software provider who develops a SaaS product. Instead of a one-time charge like Company A, though, Company B charges a $10,000 subscription fee each year for access to their service, and most customers pay for the entire year up front.

Take a look at what happens when a customer signs up for one year on January 16th:

The difference with subscriptions? Company B still has to earn their revenue, even though the customer has already paid for the whole year in advance. Delivery of the service spans the whole year—this means recognizing revenue on a straight-line basis where revenue recognition occurs monthly and the rest is deferred revenue, even though Company B's already seeing an improvement in their cash flow.

The problem with SaaS is that the subscription business model falls between the gaps of GAAP. There aren’t any specific revenue recognition standards for SaaS businesses. This is where a number of SaaS companies trip up—since there aren’t any accounting standards, they fail to realize that they have to recognize the revenue for a service incrementally throughout the time window for that service. If you recognize all the revenue upfront and then spend the cash, if a customer comes to you asking for their money back, you’ll likely find yourself up the proverbial creek without a paddle.

Now, let’s jump out of the software world. Company C sells appliances, and their lack of showroom space means customers often purchase dishwashers, fridges, and other items without being able to accept the products on the spot. Instead, they schedule delivery and installation for a later date.

Say Company C sells an appliance package to a customer on January 16th for $10,000. The customer pays for the appliances on February 10th, but the appliances aren’t delivered until March 3rd. Let’s see how it plays out (you can ignore MRR since renting appliances isn’t common):

Our final example comes from the consulting world. Company D is a marketing firm that provides digital marketing solutions to growing startups. Say Company D provides $10,000 in marketing services to one of its clients in January, but the client doesn’t pay for those services until April:

Revenue recognition for service-based work like consulting happens at the time of consulting (when revenue was realized and earned) even if the client pays at a later time. This means Company D should recognize their client revenue in January, even though the cash for those services wasn’t received until April.

Exceptions to the revenue recognition rule

Of course, there are always exceptions to the norm. Not all companies fit into the above categories, so let’s take a look at a few outliers.

For larger purchases where a customer pays through installments—like a mortgage, for example—companies should only recognize revenue once the payment has been received.

Say a property developer buys a house for $200k, fixes it up, and sells it for $400k. The buyer, though, pays in four installments of $100k each, spread evenly across the next 12 months.

For each payment, the developer should recognize 25% of the total amount of revenue and gross profit earned—in this case, $100k and $25k respectively—since there’s no guarantee of the following payments coming through until the developer has the cash in hand.

Particularly for long-term manufacturing or construction projects, revenue is often recognized at different stages throughout the production process. Usually, revenue recognition occurs at fixed milestones, based on progress towards completion.

For example, a construction company might be under contract to build 20 miles of railway line for $1m. For each mile of line completed, they can recognize $50k in revenue (divided equally per mile).

This is most common with companies manufacturing standardized goods, like mining, oil, or agricultural companies. An oil company, for example, selling barrels of crude might recognize revenue after the oil is packaged and ready for sale, even if it hasn’t actually been purchased by the end customer.

There’s no way around it—revenue recognition in SaaS isn’t easy. The distinction between different metrics like MRR, ARR, cash, and revenue trips up even the most seasoned founders.

Understanding how and when to recognize your SaaS revenue isn’t something you can just wave off and hope for the best. It’s vital you set your revenue recognition right, so you can protect both your business and your customers and confidently reinvest in growing your company.

When is revenue recorded on a balance sheet?

Accrued revenue (that has been earned but no cash received) is recorded on a balance sheet. Revenue earned from business operations is recorded in the income statement.

What is a five-step revenue recognition model?

A five-step model, provided by FASB (Financial Accounting Standards Board), includes the following steps in the revenue recognition process:

What is cash-basis accounting?

Cash-basis accounting is a method that refers to expense and revenue recognition that occurs at the same time the cash is received. The cash-basis method is an alternative to the accrual accounting method.

How to Implement Price Skimming [+Examples]

Read all about price stability, how it is measured, what are the benefits, and what happens when prices are unstable on the ProfitWell blog.

Internal growth rate: A formula to accelerate your business growth