On this episode of the ProfitWell Report, Shamilee Ilango, CEO of Surfboard Digital, has an interesting question about remote teams: how do they impact growth?

To explore the power or lack thereof of remote, we looked at just over 3,000 subscription and SaaS companies. Here’s what we found.

This is the type of study that we’re going to lose friends over, even though there’s an incredible amount of nuance.

Remote company cultures have become more akin to a religion than a growth strategy with amazing people that I respect so, so very much, like DHH from Basecamp, Nick Francis from Help Scout, and Wade Foster from Zapier preaching the power of remote / working from home.

In the early stages, remote companies are growing at a much slower rate than those companies where everyone is co-located.

You’re seeing here a blend of a lot of different types of companies that are doing anywhere from $1M to $10M in annual revenue. Note that no matter the ARPU, which is charitable proxy for different types of teams, remote teams have growth rates that are roughly 20 to 30% lower than co-located teams. 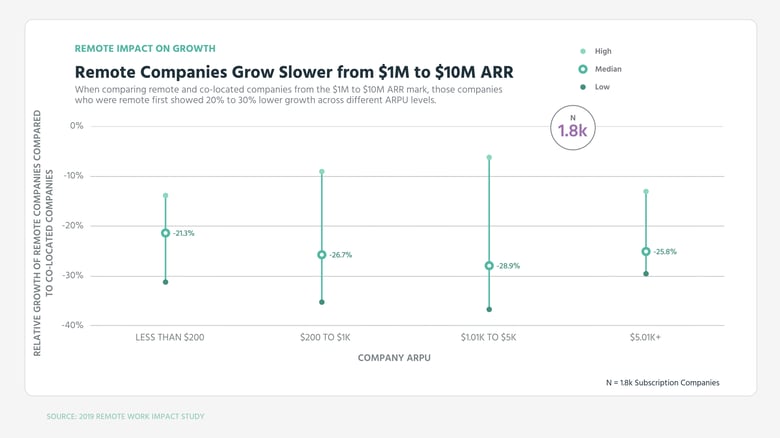 What’s fascinating though is that as companies get larger, this growth differential starts to diminish.

When we look at a similar split of companies, but now looking at those doing $10M to $75M, you’ll note that the difference has essentially halved to remote teams growing 10 to 15% percent less than co-located teams.

You’re obviously seeing some survivor bias with this data, but when you think about it, this trend stands to reason. By $10M you probably have figured out your main channels and definitely product/market fit, so remote is less of an issue.

That’s not to say that figuring out product market fit and your channels requires you to be in the same room with one another, but it’s likely easier.

When we look at companies doing more than $75M, this growth differential essentially disappears, although the data is fairly sparse. 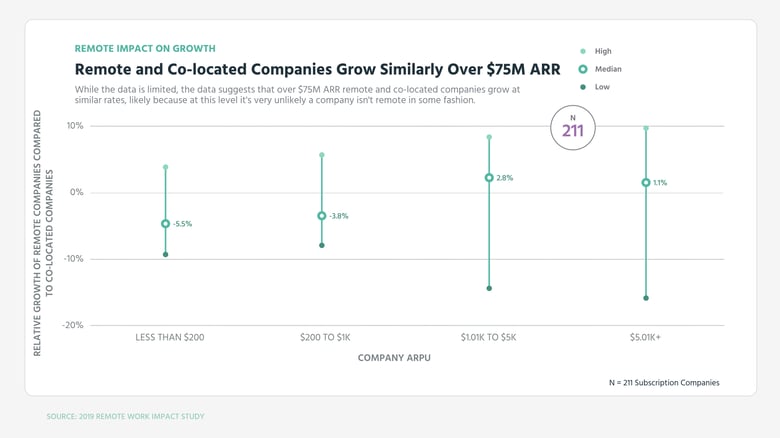 That being said, most companies when you get to this level have evolved to a point where they’re remote anyways with multiple offices, a contingent of folks who work from home, and obviously a high volume of different types of team members.

On the other hand, we do also see companies bring people back to the mothership when times get tough - like Yahoo and Reddit - to name a couple.

So should we say screw remote teams? Not exactly. There are a few big pieces to keep in mind here. For one, as stated previously all companies go remote or multi-office at some point, so it’s not an argument of either/or, it’s more of an argument of when.

Further, a lot more research needs to be done here, because the big question is why we’re seeing this data. Is it because co-located teams handle ambiguity better? Is it because of a technological connection problem that will diminish over time making the trend reverse?

There are just a lot of unanswered questions here.

Including "Blockchain" in Marketing Copy Powers Willingness to Pay

We designed a pricing experiment with just over eleven and a half thousand target customers to answer the question: How does having "blockchain" or "crypto" in your marketing impact willingness to pay?