The quilting and knitting industries are a lot bigger than you think, which is why we’re going to do something a little bit different in this episode and take a look at how someone might go about capitalizing on these industries. While services like Quilty Box and YarnYAY! exist already, there’s a huge opportunity for additional subscription box services, and we’ll show you why.

In this episode, Peter and I talk through willingness to pay data and feature preference, as well as some top-level stats that are sure to surprise you. It shows just how important it is to not only understand your potential customer, but the industry as a whole.

How big are the quilting and knitting industries?

Quilting is a $3.7 billion industry, with the average quilter spending between $6K and $8K on supplies and equipment every year. Ninety nine percent of these people have a Facebook page, 97% have an iPad, and the annual household income equals $100K or more.

While knitting isn’t quite as large, it is also a multibillion-dollar industry. To put that in context, the visitor management market, with companies like Envoy, is currently valued at $730 million, and the digital notes market is currently at $700 million.

Let it be known that crafting is a serious and lucrative business.

The crafting industry has a lot of untapped willingness to pay

“What’s kind of fascinating is that quilters and knitters don’t mix as much as you would think. So there’s a huge opportunity for the conglomerate crafting companies to start building a subscription product to target each niche.”

Since there isn’t one particular company we’re looking at today, we decided to break down willingness to pay for the industry as a whole. To do this, we reached out to knitters and quilters, asked them to identify themselves by their craft, and then followed up with additional questions about a faux “quilting of the month” or “knitting of the month” club.

Based on the responses from 3,204 quilters and knitters, we’ve put together an encouraging picture of just how much of an opportunity there is for a subscription product in this space. 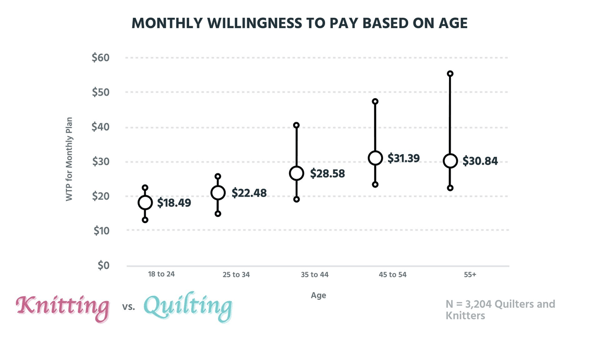 Monthly willingness to pay for a faux subscription box product based on age.

For 18-to-24 and 25-to-34-year-olds, the willingness to pay hovers around $20. While that isn’t a great starting price for a subscription box product, there is an opportunity to capitalize on these younger quilters and knitters. A low-lift product, such as a Pattern of the Month Club (which can be delivered digitally) or educational series, would get these people in the door.

More accessible pricing tiers like this work well as acquisition tools. And with the right upsells and nurturing, companies could easily turn these newbie craftspeople into dedicated quilters or knitters.

Once you get into the 35-to-44 segment and higher, especially 55+ customers, the willingness to pay jumps up to around $30 a month, which is a much more sustainable subscription. But there are also huge ranges, with some people willing to pay over $50 a month, so it’s important to think about how to package features for these different products. We’ll take a look at feature preference a little bit later to clarify.

When we break down this willingness to pay based on the frequency of activity, how often someone quilts/knits, the data shows us ways to refine a pricing strategy even more. 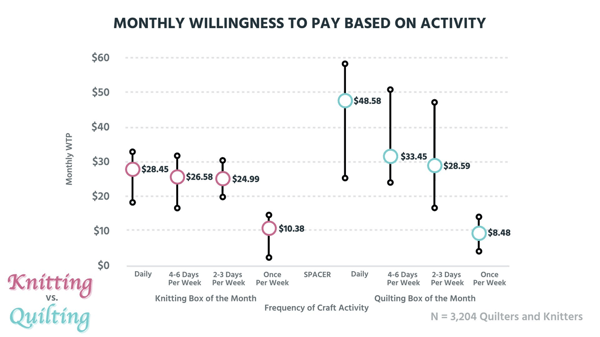 Monthly willingness to pay for a subscription box product based on frequency of craft activity.

For both the quilters and the knitters, the Once Per Week hobbyists are only willing to pay around $10, but that doubles as people spend more time on their craft every week. On average, quilters working a few times a week hover around $30, where knitters only spend around $25. The disparity gets even larger when we look at people who do the craft daily, with quilters landing at $48.58 and knitters more than $20 under at $28.45.

This makes sense, because there’s a much higher equipment and supply cost for quilters— who need a machine, fabric, batting, and patterns. Knitters have a much cheaper entry point, only really needing needles and yarn. With this lower barrier to entry, companies could easily create a beginner box that appeals to knitters, then upsell and educate customers into quilting over time.

The right strategy will tap into willingness to pay for each different buyer persona and build out a “Craft of the Month” box that appeals to everyone along that knitting-to-quilting spectrum.

Community and exclusivity are key features for potential buyers

“Quilt and yarn shops typically end up having an entire community built up around them.”

For lots of people, the appeal in quilting and knitting is the community aspect. Quilt shops allow people to meet up and swap patterns or use equipment that’s too expensive for the average quilter. And most yarn stores will have a table in the back where people knit, get help, or just meet up and practice their craft together.

When we take a look at a value matrix that breaks down willingness to pay related to feature preference, the importance of community is one of the biggest takeaways. 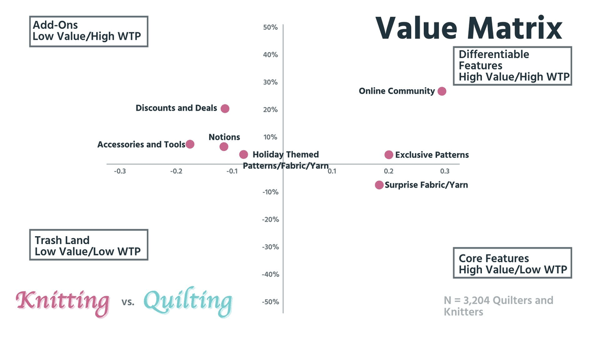 Relative preference and willingness to pay for proposed features of a monthly subscription product.

There it is in the Differentiable Features quadrant, an Online Community is the most preferable feature we found, more than 25% above the median willingness to pay for anything else. Exclusive Patterns is slightly less preferable, but is also important to both quilters and knitters. For someone who has a local quilt shop, the community aspect is already taken care of, but if a potential customer doesn’t have access, this community is a great way for them to connect with others that share their passion.

The Add-Ons quadrant is particularly interesting as well. We typically don’t see Discounts and Deals in this area, but for such an expensive hobby like quilting or knitting, it makes sense. Most people don’t really want discounts as a part of the product, but those that do are willing to pay a subscription price to help drive down equipment and supply costs. You also don’t see a lot of preference for Accessories and Tools due to the fact that many people will already own their own.

When thinking about how to create a subscription box for this industry, we’d suggest a strong focus on community and exclusivity. By connecting quilters and knitters with their peers, you appeal to the most preferable features and give potential customers a good reason to continue their monthly subscription payments. Offering up exclusive patterns also helps differentiate your brand.

There’s a huge opportunity in the quilting and knitting industries to capitalize on existing willingness to pay. The average crafter has a significant amount of expendable income which can be put toward a subscription box service for either niche.

There’s also been a resurgence in these crafts recently, with younger people starting to recognize the old-school and bespoke aspects of a handmade quilt or scarf. That said, we’d both probably invest in a quilting subscription over a knitting one. Not only is the market bigger, the average quilter already spends a significant amount of their income on the craft, so they’re primed to purchase.