Churn is one of the most painful aspects of building a subscription business. You work incredibly hard to acquire customers, prime them with the right value proposition, do everything you can to make them happy, only to be left with a non-descript reason as to why they're leaving and will never be seen again.

*****We will only be posting a few of these episodes on the blog, which means if you want to be a part of this series you must subscribe separately****


To understand the current state of retention, we pulled data from over three thousand subscription companies of all shapes, sizes, and verticals. We'll initially break down where churn stands overall, and then dig into some actionable trends for you to take advantage of for your business.

First up - While we love to click and retweet articles about lowering our churn, it turns out churn is actually much higher than most companies are willing to admit and only loosely correlates with a company’s size, meaning as a company gets bigger churn tends to get smaller, but only slightly. What's especially interesting is the wide interquartile range that fluctuates between 5% to 16% gross revenue churn on the low end, and 2% to 8% on the high end. 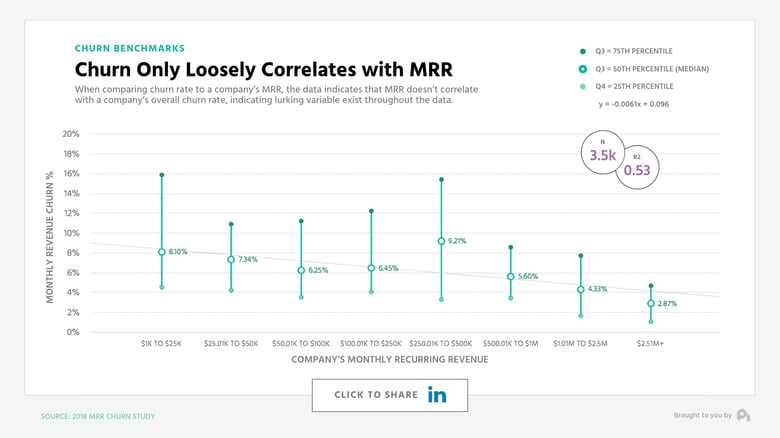 Perhaps most telling, there's a strong correlation when comparing ARPU (average revenue per user) and churn. Single and double digit ARPU correlated with churn between 3% and 15%, whereas four figure ARPU dropped to 1% to 5%. This is to be expected, because high ARPU tends to come with a more consultative sales team, more customer success, and more attention surface area per customer.

Interestingly enough, we saw a similarly strong correlation when it came to the age of the company with companies longer in the tooth seeing significantly lower churn than those who were younger. Of course there's survivor bias here, but you'd hope to see this when it comes to a growing company. 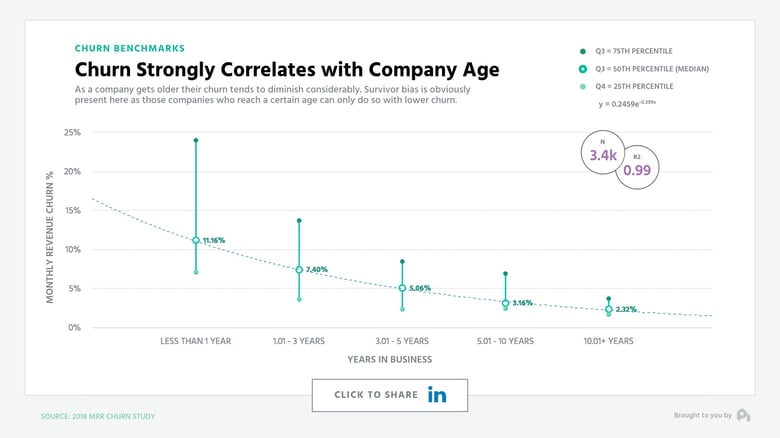 Let's dig into some truly actionable cuts answering what are the biggest influences on churn we could find.

Along this axis, the first piece was really the proportion of annual contracts in the business. Regardless of ARPU, those companies with a higher percentage of annual contracts see significantly lower churn. This is because these customers have only one purchasing decision per year (albeit a larger one) whereas their monthly counterparts have 12 purchasing decisions per year. 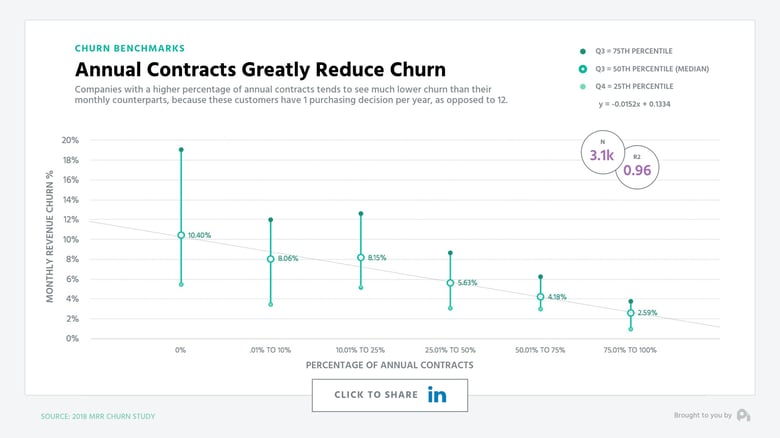 Delinquency rate also significantly correlated with high churn. Delinquencies are credit card failures, and it turns out 20-40% of churn is typically from delinquent churn. This churn is painful because it's completely mechanical with over 130 different reasons a credit card will fail, but most companies don't have a good solution for combatting this churn. 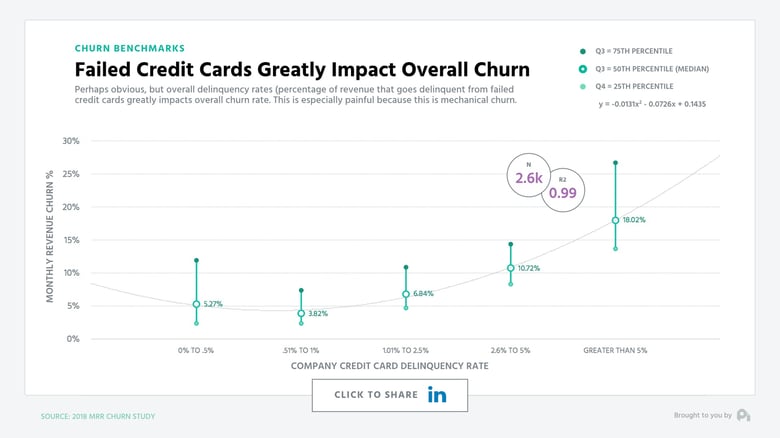 Finally, and likely most controversially, we found that those companies with funding saw 20-30% higher churn rates than those who didn't take on funding. There's likely a number of reasons for this, but through qualitative research we've found that a likely culprit is the false sense of security that comes with the moral hazard of being able to spend your way out of growth holes. Not saying don't raise funding, but be careful and ensure funding is a tool, not a crutch or a bandaid.

Well, that's all for now. Thank you David for the question and I trust all is going well at Drift. If you want us to research further into this data set or research an entirely different data set, feel free to reach out to me at pc@profitwell.com or send us a video. We'll have more data for you next week.

To help give a gift back to the SaaS ecosystem, we’ve compiled the largest SaaS MRR churn study in the world, in order to help you answer that ever crucial question: “What should SaaS MRR churn look like?”

We studied unit economics from over 5,000 companies and willingness to pay from over 1.2M subscription customers to provide benchmarks on ideal customer target size for new SaaS companies.