Over the past century we've gone through a few waves in purchasing behavior. After setting up infrastructure in the industrial revolution we entered a wave of mass production and consumerism. People could purchase lots of goods from a variety of options for the first time, and they took advantage of the shift. Suburbs blossomed and our consumptive economy boomed.

What comes after the foundations of consumption though? Well—choice.

Having the ability to purchase really anything you needed from a variety of options was great, but then came the waves of differentiation amongst picky consumers who started to care about a plethora of things. We saw the anti-mass production wave that cared about quality and craftsmanship. The "safe" wave that cared about which ingredients were going into the products we consume or use. We've even seen location waves for "Made in the USA" to support American workers to "Made in COUNTRY" as an indication of exotic or quality allure. After all, only great dutch oven's can come from Le Creuset in France, right? (Sarcasm intended).

While these waves come and go, persisting as generations move forward consuming, there are new waves we're heading into around social causes and identity. We're going to talk more about identity another time, especially since the retention and willingness-to-pay data sets around political affiliation are fascinating. Yet, social causes seem to be having a resurgence as millennials finally get some purchasing power and Gen Z follows suit.

Specifically, we're going to walk through how aligning your brand or product to a social cause can increase your retention and willingness to pay. We'll of course go through some great data to support these notions, as well.

Cause products: aligning with our will to help

First though, what's the theory here? It's actually pretty straightforward. Social media and the internet have connected us in ways we never thought imaginable. Some good. Some bad. One area of connection is to the problems happening around the world that impact groups we care about or humanity as a whole.

Decades ago we'd only hear about the Romanian adoption crisis or poverty in subsaharan Africa from news outlets. Today, non-profits and NGOs can put the problem front and center with a creative campaign and some ad budget. When this reach is mixed with a population that in aggregate is pretty well off and therefore has high empathy to wanting to solve problems, you have a recipe for consumers caring about the world.

We take it a step further though, not only in donating our time and money to causes, but also caring about the stances and causes of the products we buy. This manifests itself in fascinating social capitalism phenomena like the Spring of 2020 and the George Floyd protests, but also in how we compare options. After all, if quality is essentially the same between options, then why wouldn't I buy the product that's helping save the world?

I'm glossing over some major sociological and psychological concepts for the sake of expediency, but the data backs this up in some telling ways.

Products aligned with a cause have higher willingness to pay (WTP)

Let's first look at how willingness to pay is impacted when a product is aligned to a cause in some manner. We ran a study using ProfitWell's Price Intelligently product where we measured the willingness to pay for a number of baseline products in both consumer and B2B verticals. We then measured willingness-to-pay studies amongst similar respondents, but inserted a value proposition around the product being aligned to a cause. We then looked at the difference as displayed in the data below.

One important note here is that we measured two types of causes, a cause that wasn't aligned to the mission or use case of the product (ie. ProfitWell donating 1% of revenue to save the environment) and a cause where the use case and mission were aligned to the product (ie. a tampon subscription that donated feminine hygiene products to women in need based on purchases).

A couple of notes in the data: 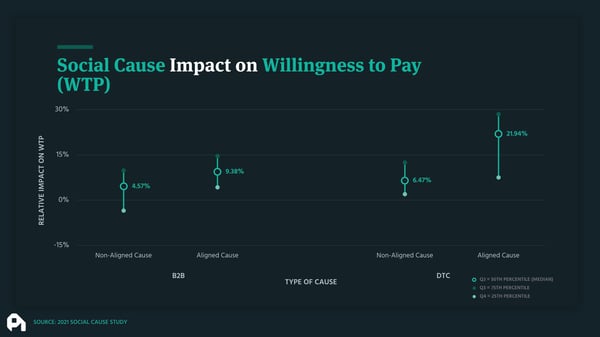 While brands have been aligning to a social mission for quite some time (Tom's shoes being one of the first prominent ones), some brands have taken things a step further in asking customers to actually donate to causes in addition to paying for their subscription.

In practice both B2B and DTC companies will prompt you in the checkout flow to add a monthly donation of $1 to $5 to support the cause. Other companies do this after the fact and say that X% of revenue or profit will go to the cause. While these companies may just be trying to do the right thing, these practices actually have some pretty stark impacts on subscription retention.

So what should you do with your subscription company?

As the data suggests, having an element of altruism can actually pay off financially, as well. Let's break down recommendations based on vertical.

Overall, I don't think cause and identity mindsets are going away for our customers anytime soon, so it's important to think through your strategy as the world becomes more and more competitive. There are obviously other implications for this phenomena that will impact recruiting and culture, but we can save those for another day. Also, keep in mind I'm looking at this from a specific lens around charitable aspects' impact on retention and willingness to pay. I obviously know there are other reasons to do this within your business.

Part of the way we measure success is by seeing if our content is shareable. If you got value from this episode and write up, we'd appreciate a click to tweet or a click to share on LinkedIn. Helps us get this into the hands of as many people as possible. We'll see you next week! :)

On this episode of Protect the Hustle, we go deep on product design with Kayak and Lola Founder Paul English. We cover why creating a great product takes a relentless focus on the fundamentals and a commitment to always making things simpler.

Mike Volpe, CEO of Lola.com: Without Great People, You Will Fail

We sit down with Mike Volpe, CEO of lola.com, to chat about how he went from helping companies IPO to building one of the best marketing teams during his time at HubSpot.