Case studies and celebrity impact on retention and pricing

The result? Most marketing has shifted to needing to reinforce trust through free trials, money-back guarantees, and plenty of content. If you can "try before you buy" or at least feel like the brand's spoken to you enough, you'll feel more comfortable making a purchase.

One particular piece of content that's been on the rise are influencer and celebrity endorsements. As media becomes more and more fragmented, we end up trusting individuals over institutions. Let's explore this phenomenon with a bunch of data to answer, should you embark on influencer marketing even in B2B?

When we make purchase, we start from a dfplace of dissonance. We may want the product. The product may claim to solve our pain. The product may give us the value we seek. Yet, we don't definitively know, so depending on the price, impact anticipated, and effort required we may end up in analysis paralysis—never making a decision.

Case studies and social proof can help us get over these nerves. After all, if I see a logo of a brand that I think I'm like or a person in a role that's similar to mine, I start to trust that I'm not going to make a mistake. In essence, I see myself in them and they're happy, so I'll be happy, too. 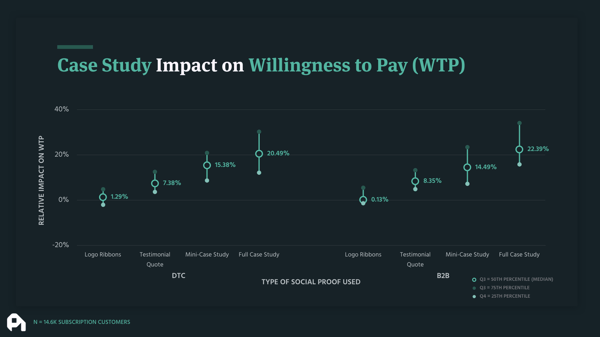 Pretty fascinating, but let's look at retention now. I looked at a group of users across a bunch of different subscription products and measured if their purchase was influenced by referral, case studies, or any semblance of social proof. I then separated them into two buckets: those influenced and those not influenced, and measured their retention relative to median retention. 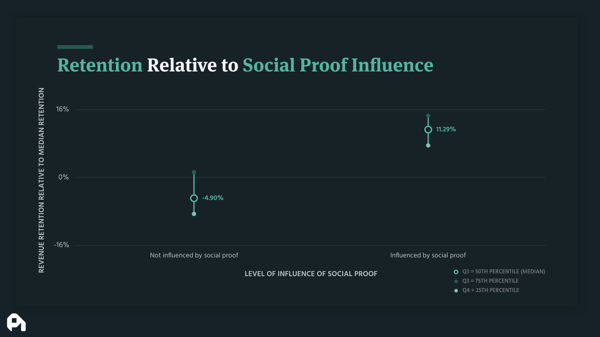 The output here has thrown me for a loop a bit, because you'd think the product would stand alone. After all, if I don't like the product, I'm gone, right? Initially, I thought this data and that thought couldn't live in the same universe. Yet, I think what's happening is the folks who came in influenced by social proof end up giving the product more of a chance. If they aren't getting value, they think they're the problem—"Well Judy at Notion liked the product, I should too; let's try another month." On the flip side, those not influenced by social proof end up being more skeptical. I'll need to noodle on this more, but if you have any ideas reply and let me know.

What should you do with your business?

You need to at least have basic logo ribbons or quotes on your site and in your marketing from existing customers. Invest heavily in case studies that go deep on your product's value and then work to align those case studies to the different leads you have. We personally kicked off a project for written, video, and graphical case studies across our product lines and verticals. You'll start seeing more of that over the next month or so.

Another thought that stemmed from the data here is to include some sort of existing customer marketing of case studies. This may not make sense intuitively, because they're already customers, but based on this data I feel as if creating some sort of FOMO will actually be beneficial to starting the right conversations with your customers.

Here's where things get interesting... what happens if I have someone famous or influential (or at least famous/influential for the field I'm in) endorse my product? There are two axes that are interesting when doing celebrity or influencer marketing: One is along their reach for spreading your product, and the other is along the conversion at a particular price point for your product.

For reach, there have been many, many articles written on influencer marketing, so I'm not going to spend a lot of time there. The idea on a basic level though is that your celebrity/influencer has a larger audience of your target customers than you, so presumably, they can spread your product more quickly. This is why we worked to get on Oprah's favorite things when I was at Gemvara, or you can't watch a YouTube video without an ad for a VPN or Honey.

Celebrity/influencer impact on willingness to pay and retention is much more interesting, because, presumably, you have someone more influential than someone similar to you endorsing the product. You have someone you admire or look up to on some level. To measure this we ran the willingness to pay study from above, but used different levels of endorsement. The results are below for B2B and DTC, but here are some interesting takeaways: 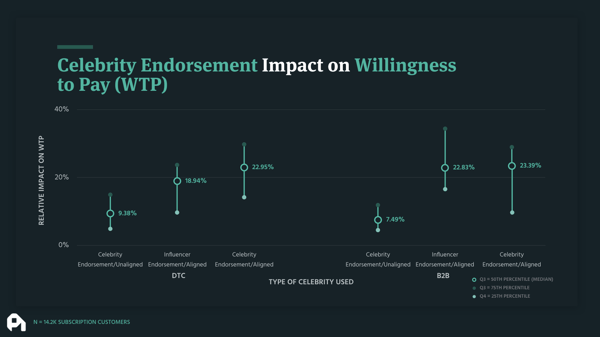 Basically if you can get a celebrity or influencer to endorse your brand, you should, but not before you consider the following retention data. I looked at a number of products that had celebrity or influencer endorsements and connected them with the retention of those companies. Essentially, alignment is crucial here. Those celebrities who were aligned with the product directly had much higher retention than those who didn't. Turns out Lindsay Lohan endorsing ProfitWell isn't that great of an idea. :) 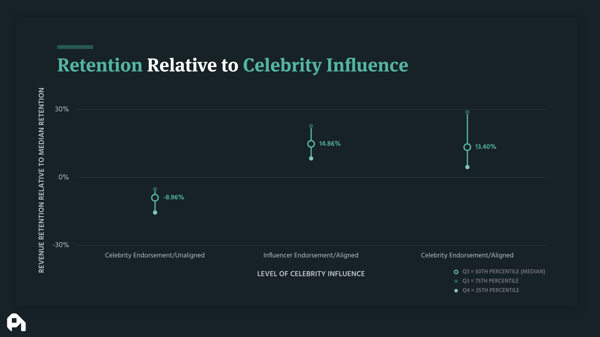 What should you do with your business?

As media becomes more and more fragmented, I think you should absolutely work to have an influencer marketing campaign, even if you're in the world of B2B. Yet, you should realize that this is more than just a spread play—it's a conversion/boost in willingness-to-pay play. As a result, you should work to push your higher-priced product or even do dynamic pricing based on the channel folks come in through.

We're about to do something at ProfitWell along these lines, but it's not quite out yet, so I don't want to go too deep on it. I'll do a fuller write up after we've launched it and have some good data. Just keep in mind, no one is doing anything with influencers in B2B.


Don't miss out on more insights. Subscribe to get more Protect the Hustle now.

Tangential, but the data above is why I'm long on Discovery+. One thing we learned (and studied) about Disney+ is that while content was everything, the identification with content was even more important. Franchises like Marvel, Star Wars, et al., are why people signed up in droves, not a critically acclaimed documentary. The latter helps, but isn't everything, because while I burn out after five seasons of House of Cards, I somehow never turn off the Food Network.

Discovery+ is the only second-wave streaming service that has this phenomenon. Chip and Joanna Gaines, Oprah, Alton Brown, Guy Fieri, Mike Rowe, and a long list of others give Discovery+ basically Marvel and Star Wars franchises of reality and home television. Here's relative willingness to pay based on whether these celebrities were involved and the respondent was a fan of the celebrity. It's up across the board. 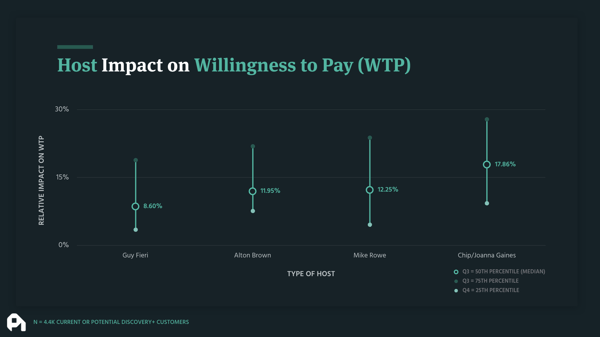 The content is also infinitely bingeable. Discovery+ can shoot seasons of Chopped and Good Eats until I die. Fans like me also tend to or are willing to watch other content on Discovery+. Thus, the wheel turns and I'm retained forever. No other streaming service besides Disney+ and Netflix has anything close to this, so I'm excited to see Discovery+ rise through the ranks.

Ok. That's enough analysis for the day. If you found this useful, would love for you to share it on a social media channel of your choice. You can just click one of the buttons below. Ship me feedback or any thoughts by just replying to this email.

May Habib on total market transition

On this episode of Protect the Hustle, we talk to May Habib about playing a pivotal role in the market transition of content intelligence platform Qordoba.