Have you ever walked past your favorite store and the windows were plastered with signs that read, “BOGO 50%! TODAY ONLY!” then proceeded to walk in and purchase things you didn’t even need? If the answer is “yes,” then you, my friend, are a victim of psychological pricing.

What is psychological pricing?

Psychological pricing is a pricing strategy that utilizes the power of psychology or the subconscious to influence customers to spend more. This is usually a combined effort across different business functions (sales, marketing, and customer success) to leverage market trends to create irresistible offers for customers.

Psychological pricing can also be described as setting prices lower than a whole number — for example, $3.99 is perceived as “cheaper” than $4. The idea is that customers will perceive the slightly lower price as a deal and be motivated to make the purchase. Discounting is another psychological pricing tactic that retailers can use to frame the sale of their products.

Pros and cons of psychological pricing

1. Attention boost: Any type of big promotion will boost attention to your product. If you run a brick and mortar store, having big, red signs detailing your product promotion will obviously force people to look at what you’re selling. If people don’t purchase, at least your brand is gaining attention.

3. High return: Psychological pricing discounts can offer a high return on investments for one-time sales, especially during peak-volume seasons, AKA, any holiday. With promotions that attract the masses, acquiring a high return at the end of the day is likely.

4. Sense of urgency: Depending on the strategy you use, psychological pricing creates a sense of urgency. Customers will want to act fact so as not to miss out on the deal. This will also boost a quick high return on investments.

1. Deceitful: Some people may see right through psychological pricing tactics and perceive it as taking advantage of customers. Some, however, may recognize the tactics and accept them as the essentials of doing business.

2. Misperceived value: With psychological pricing tactics, there’s always the risk of misperceived value. Your price is how you convey value to your customers. This type of communication hinges on your customer’s perceptions of your pricing. If you lowball your prices just to trick your consumers into a quick deal, they may think lower of your product quality and expect those low prices continuously.

3. Not a long-term solution: Employing psychological pricing tactics is certainly not a long-term pricing solution. It may bring you quick conversion for a short period of time, but B2B businesses should have a more solid and long-term plan in place. SaaS businesses are built on recurring revenue, and with that, comes a lot of trust from customers. Utilizing pricing tactics may damage that trust.

There are popular strategies behind each discount, promotion, advertisement, and deal out there.  Here are the four most favored.

“BOGO! ONE DAY ONLY!” We’ve all seen this ad to some tune. Stores will place an artificial time constraint on a sale to create a sense of urgency. Stores employ time restrictions because they act as a catalyst for consumers to spend. The psychological tactic creates a sense of fear in consumers. If they don’t act now, they risk missing out. The truth is, though, there will always be another sale.

This is the fancy and more official name for all the prices you see in-store that end with “9.” Researchers at MIT and the University of Chicago found prices ending in “9” create increased customer demand for products. The science behind this is that people read from left to right. So, if they encounter a price at $1.99, they see the “1” first and perceive the price closer to $1.

When offered “Buy one, get one 50% off” versus “50% off of two items” most people select the first option even though both result in the same price. This scenario best describes innumeracy, a phenomenon in which customers are unable to recognize the fundamental math principles applied to everyday life.

A study by Akshay Rao from the University of Minnesota’s School of Management found consumers are waning on discounts in favor of receiving something extra. We actually prefer receiving more items than a discount because of our ignorance with math.

Another psychological tactic nestled under innumeracy is double discounting, where the item will be marked down with an original percentage then an additional percentage off. For example, an item may be advertised as 25% off. Then, the company will offer an additional 20% off. Customers may perceive this as 45% off the item, when really it’s just 20% off of the discounted price.

How a price looks to the naked eye impacts the psyche. Longer prices appear to be more expensive than shorter prices, even if they’re the same number. The reasoning is that longer prices take longer to read so people subconsciously couple time with cost.

You’ve definitely seen this in a restaurant. Many restaurant menus will have the prices in smaller font and will omit “0s” and dollar signs. Omitting the dollar sign makes the price look shorter and eliminates the direct association people have with the cash in their wallet.

Whether you’ve realized it or not, you have absolutely come in contact with psychological pricing strategies. Here are a few examples of some of the strategies we just went through.

It’s no secret that the best sales and promotions are after a holiday, especially Christmas. Check out this advertisement posted on a retail website.

First of all, the advertisement is in red. You literally cannot miss it, especially with the word “SALE” glaring at you in all caps.

This company employing multiple strategies here, specifically innumeracy. There are so many numbers and equations right on this one ad. My main takeaway, without thinking too hard, is that there are deals to be had right now. By throwing all these numbers out there, this company is assuming people won’t do the math and break down how good those percentages’ off really are. Double discounting is also seen here. Customers can receive between 20-50% off plus that additional discount (with a code). Most customers will see that as one big discount, not realizing the additional percentage comes off of the already lowered price. 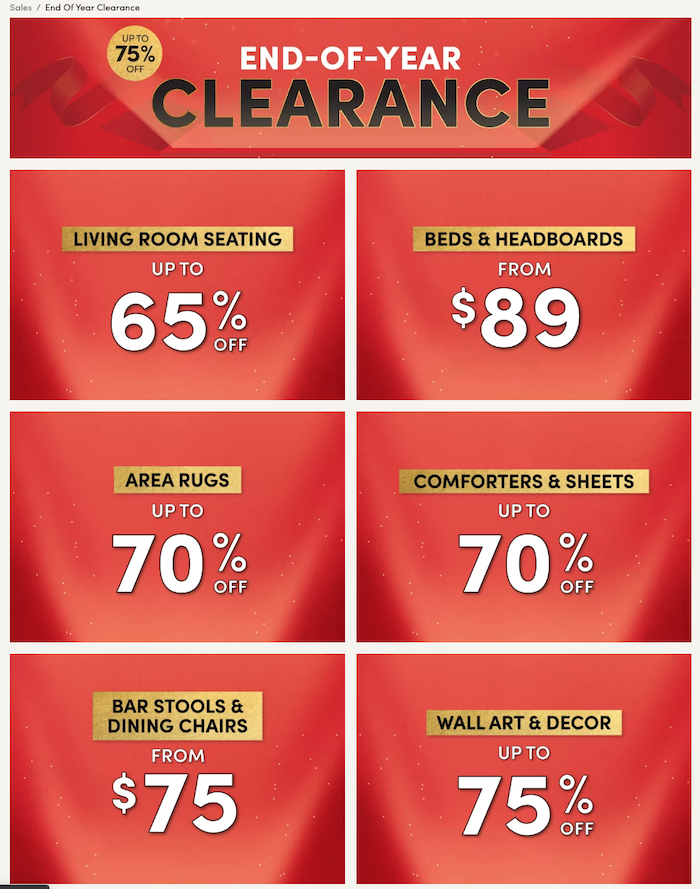 This end-of-year sale ad also deploys lots of psychological pricing. One number that stands out to me on this advertisement is “$89.” This price in particular is a prime example of charm pricing. That $89 looks way cheaper than if the ad were to say “90,” especially since 90 is close to 100.

Then there’s this “exclusive deal” reaping the benefits of time constraints. At the top of the page there is a banner with a stopwatch indicating how much time you have left to secure the advertised deal. It reads “offer ends in Xhrs Ymin Zsec.” The running clock might trigger panic in customers. They physically see the time running out, encouraging them to purchase right away. 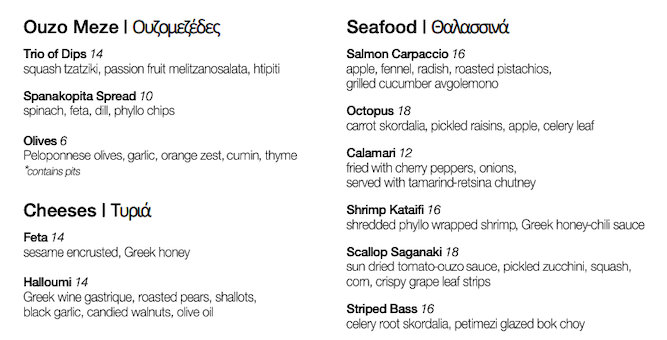 This example perfectly demonstrates the effectiveness of price appearance. The menu overall has a simple, easy-to-read look. The prices are right next to the name of the menu item. The prices are not in a smaller font, but they are in italics and lacking “0s” and dollar signs. Not only does this look sleek, but 14 looks cheaper than $14.00 because it’s shorter.

Do we recommend psychological pricing? It’s not a hard “no” or “yes.” But we think there are much more effective pricing strategies for B2B SaaS businesses. The recurring revenue model is centered around your company’s relationships with customers. It’s much better to price based on value and keep people around for the long-term.

However, for B2B, here at ProfitWell we believe you should boost value instead of discounting. Rather than slashing prices, give more away for the same cost. This will boost value and trust, while also allowing you to maintain the prestige of your brand.

Here are the answers to the most popular psychological pricing questions.

What are the types of psychological pricing?

There are a lot of different psychological pricing strategies out there. Some of the most popular ones include charm sizing, bundling, discounts, ceiling price, BOGO (buy-one-get-one-free), and more.

Why is psychological pricing used?

Some of the reasons stores use psychological pricing are to get an attention boost, simplify the customer’s decision-making process, create a sense of urgency for the purchase, increase returns on one-time sales, and more.

Why do companies use 99 cents as a psychological pricing tactic?

Usually, customers round the prices to the next lowest unit. Because of this, customers are likely to round down instead of up ($7.99 is likely to be perceived as $7 instead of $8). This tactic is especially useful considering the sales of cheaper goods where the $1 difference has an impact on the sale and consequently margins.

How does psychological pricing increase sales?

"Captive product pricing (often referred to as captive pricing) is a great way for businesses to sell complementary goods in order to maximize revenue. "

Premium pricing is a common pricing tactic used by brands to leverage their high-value goods, but is it the best pricing method?