In this episode of Pricing Page Teardown, Patrick and Peter dive into how these two cloud storage providers use positioning and feature differentiation to solidify their place in a market that is growing exponentially.

“What's really fascinating about Box is that they have 700 customers that are paying them $100,000 or more per year because they're focused on the enterprise. Their DNA is the enterprise.” - Patrick Campbell

Targeting higher-paying customers with enterprise pricing lets Box structure their pricing page to focus on their business plan and feature differentiation. While they do offer individual and platform plans as well, Box really tries to draw their potential customer's attention towards a specific type of plan.

Box offers several different types of Business plans at $5, $15, and $25 a month to get started, but where they really shine is in their differentiation. Offering features such as version history, SSL, and two-factor authentication, Box is doing a really good job of positioning themselves as the go-to provider for enterprise customers.

When a business has over 100 employees, like most enterprise customers, willingness to pay and feature preference are very different from companies with less than 100 employees. What is an Add-On for some customers will be a Core Feature or Differentiable Feature for others. 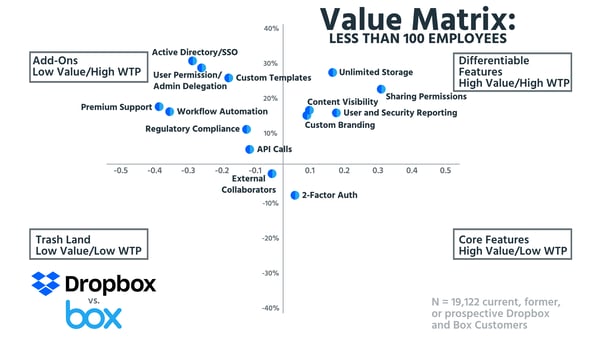 Of the 19,122 current, former, and prospective customers we surveyed, features like unlimited storage, user and security reporting, and sharing permissions were desirable for companies with less than 100 employees. A lot of the more enterprise features like active directory, custom templates, or regulatory compliance aren't really valued all that much.

This 100 employees or less market is really where we see Dropbox positioning themselves differently than Box. They don't really talk about, or even offer, most of the features we see in the Add-Ons section of the previous graph.

There is a massive shift in feature preference when a company grows above that 100 employee benchmark. 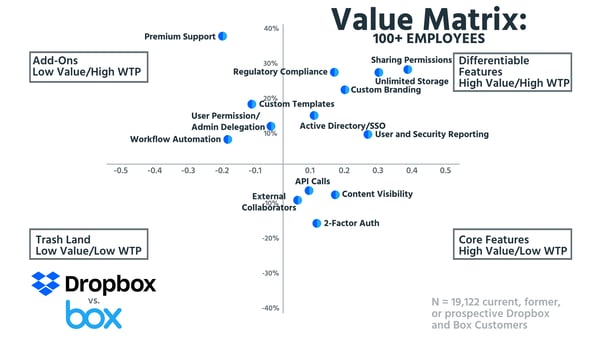 Once a company grows into a more enterprise business model, their feature preferences shift drastically. Where previously some features were seen more as Add-Ons, many are now seen of significantly higher value. Here are a few that changed as the company size increased:

Other features like content visibility, external collaborations, and two-factor authentication also become Core Features once a company grows above 100 employees. This just goes to show how different these two types of customer bases are in terms of what they value and what they're willing to pay for.

Box serves their customers best by going out and pounding the pavement, wearing their sports coats, and really focusing a lot of their attention on larger customers with a targeted sales-heavy marketing process. Dropbox, going after the less than 100 customer base, benefits from more automation in terms of touchless sales and a guided onboarding experience that the customer can walk through on their own.

Dropbox doesn't need to have enterprise in their DNA

“Dropbox figured out early how to basically get as much viral usage and viral growth out of their free plan. And what's really interesting about their Dropbox business plans is, even just looking at this page, I see an enterprise plan but I don't see an enterprise DNA here?” - Patrick Campbell

Dropbox's target customer is much different than Box's; they definitely go a lot more for the prosumer as opposed to enterprise. Known in part for their insanely successful referral program, Dropbox was able to grow their customer base 2.8 million users in 30 days with the offer of free storage. This kind of viral growth is not something that Box would be able to accomplish going after the enterprise market as they are.

The differences can be seen in their pricing strategy as well, which is simple and easy to understand but concentrates its attention on a Standard and Advanced plan at $12.50 and $20, respectively. The lack of deep feature differentiation speaks to Dropbox's focus on the prosumer as opposed to the enterprise customer base as well.

That said, the public-facing price points are very similar in both Box and Dropbox. This is also reflected in the willingness to pay based on users in the 19,122 current, former, and prospective customers we surveyed. 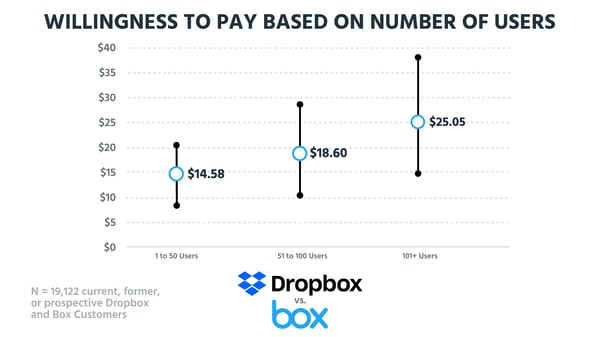 What's interesting is that these prices are not only being drawn from the competition between Box and Dropbox but from the entire cloud storage market. For between 1 and 50 users the willingness to pay averages at $14.58, which is smack dab in the middle of both Box and Dropbox's public-facing price points.

As the number of users increases, you can see the willingness to pay creep up as well, to $18.60 for the 51 to 100 range, and $25.05 for 100+ users. These prices also show the different entry points for Box and Dropbox. Dropbox is really going after the 1 to 50 user tier and moving up to serve larger groups as well. Box is starting even higher than the 100+ user tier and moving down to serve smaller businesses as well. It really goes to show how these two providers are cornering their own segment of the overall cloud storage market.

In our survey of those current, former, and prospective customers of Box and Dropbox, we also found some interesting data around the overall commoditization of storage as well. We saw that for the most part these customers didn't really understand how much storage actually exists.

The relationship we see basically points to customers wanting as much storage as possible, with a significant bump for plans that offer unlimited storage. In a commoditized market like this, companies aren't going to be competing on price. Competition really takes place in positioning and feature differentiation.

Unlimited storage now becomes a feature. Companies will be positioning themselves to offer that feature as a marketing tactic. We've seen this with both Box and Dropbox as well as Google Cloud. This means that the competition is no longer really happening between companies but with the market itself. It's a game of positioning.

Dropbox has positioned itself to go after the prosumer market and come up, while Box is targeting the enterprise market and coming down.

Two “competitors” in a growing market

While both Box and Dropbox are cloud storage providers, they are going after completely separate parts of the market, and their feature subsets speak to this directly. Box has built themselves up with deep feature differentiation for enterprise customers that is focused on compliance and larger user bases. Dropbox, going after the prosumer market, doesn't really need to build a lot of those features unless they plan to fundamentally shift their positioning.

Both Patrick and Peter would stick with Dropbox as customers for the time being. They've used the service since the beginning and don't really see a need for some of the enterprise features that Box offers. That said, as the business continues to grow and change, things like user permissions and activity tracking are starting to be more appealing.

With cloud storage, the down-market is far bigger than the up-market right now, so Peter would invest in Dropbox for that reason as well as the overall user experience he's had with the product. Patrick would invest as well but doesn't discount Box as an investment option either. As the market is expanding exponentially every year, it makes sense to back both of the leading providers. That said, there is definitely some trepidation when it comes to Google Cloud and the G Suite, which could drastically change the market in the future.

In today's episode, Patrick and Peter dig int the pricing strategies of social media management tools Buffer and Sprout Social. Tune in to find out more about why design matters and who comes out on top.