Check out this episode of Pricing Page Teardown to learn how Pornhub's subscription model encapsulates users. (This episode is completely safe for work.)

Quick Disclaimer: While there are plenty of good people who work in adult entertainment with upstanding businesses, there are tangents of this industry that are exploitative and unhealthy. If you get some value out of this episode, we'd encourage you to donate to the Rebecca Bender Initiative or Thorn, as we have done.

Tapping into the AMEX effect and VHS

“The adult entertainment industry has been at the forefront of how companies monetized and they've latched on to the subscription model in addition to the advertisement model.”

This makes the yearly subscription price essentially $100, which lowers the friction for potential customers to actually swipe out their credit card. 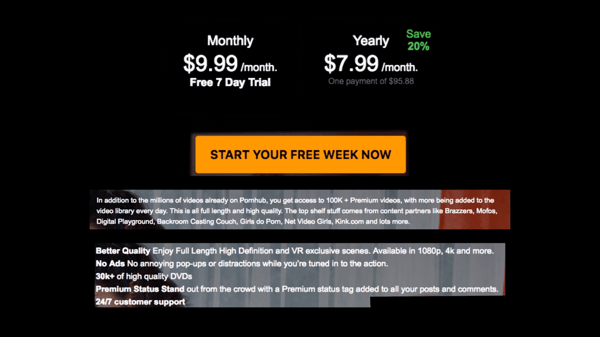 They call it the AMEX effect. Customers land on this page, see they'll save approximately 20% by going with the yearly package, and get access to a bunch of interesting features that they would otherwise not have access to.

We saw this in the VHS vs. Betamax battle of the 1980s—where the adult industry's adoption of VHS led to its ultimate popularity over Betamax. This just goes to show how much influence the industry has over other markets. There have been stops and starts in the adoption of VR to date, but maybe this will push it into widespread use.

Consumption frequency and age have the biggest impact on WTP

That said, there's a fair amount of overlap between the different segments, especially when you get to the 35 and above range. 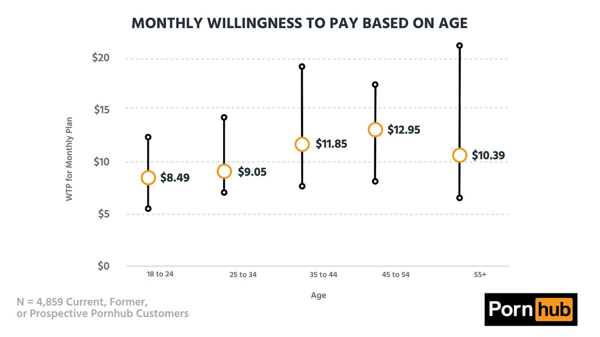 The average drops off for the 55+ segment, but we're still seeing a big swing—even up to over $20.00 for some respondents. This is definitely in line with what you'd expect when breaking down the data based on age. The younger segments don't really place the same value on premium services as those in the 35+ range. They're more concerned with keeping costs lower.

There's a similar story when we take a look at monthly willingness to pay based on consumption frequency. Those customers who are using the product on a more frequent basis are more willing to pay for premium features. 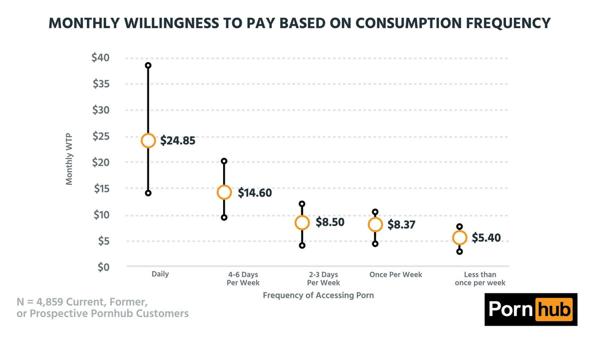 We also found some other interesting takeaways in terms of what kind of features are actually valuable for other consumer content companies. 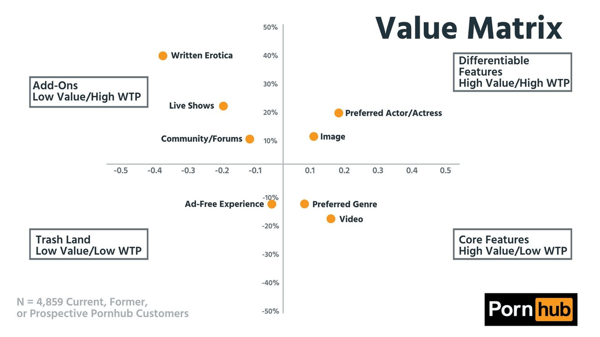 One of Pornhub's premium features is the Ad-Free Experience, which ends up in the Trash Land section of this graph.

This is something that we've seen for Spotify and YouTube as well. Customers really aren't valuing that feature at all even though it's the main selling point in a lot of company's premium tiers.

They're not really going after the women's market well at all. When we take a look at the monthly willingness to pay data, women are 50% or so less likely to pay. 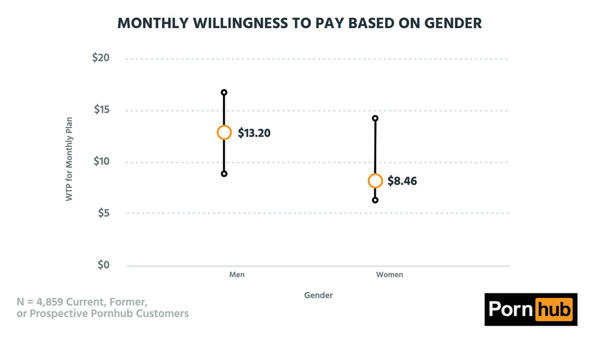 We're still seeing ranges that speak to Pornhub's ability to increase their pricing based on willingness to pay. Both men and women are comfortable moving up towards the $15.00 a month mark, with men slightly higher at around $17.00.

This Thursday, we're all about making the most of your email efforts, an ad free internet, and naps.

Get the secrets to developing a values-based company culture in our interview with Kyle Porter of SalesLoft.

On this episode of the B side, Patrick goes into probably the most obvious, superficial point we could learn from Disney. But why is it so powerful for subscription businesses?

On this episode of the B-Side, Patrick shares one of our internal memos that's slightly redacted on one of our core principles at ProfitWell: thinking from first principles.