You’ve seen them before. The technical books on everything from Python programming to user mapping, Unix systems to sustainable design—each one featuring an engraved image of some sort of cute animal. That’s O’Reilly Media’s signature style, and we're breaking it down with them in this week's episode.

This fellow Boston-native company has an authoritative brand in the education and technology market, backed by decades of success in publishing. And though their subscription learning platform is an awesome tool, O’Reilly doesn’t do a good job of building their pricing strategy to capitalize on the huge opportunity they have to win with this product.

How much does O'Reilly Media cost?

O'Reilly Media's Online Learning platform starts out with an Individual package for $39 a month or $399 annually. The Team tier is also $399 annually, but on a per user basis. For their Enterprise tier, O'Reilly asks that people reach out to their sales team directly for a custom quote.

O'Reilly pricing tiers are too similar

“A problem with a lot of online learning platforms is that the unlimited nature of a lot of the content just doesn’t work. Customers don’t care about 90% of what they’re paying for, it’s overwhelming, and it’s really complicated.“

It really doesn’t feel like O’Reilly has put a lot of thought into how they structure the pricing tiers for their online learning platform. They offer way too much in the Individual tier, which sets them up to underdeliver for both the Teams and Enterprise tiers. It’s really all about packaging for this kind of product, and they need to do a better job of it to appeal to the right target buyer personas.

Below is the breakdown of what’s offered in every tier. Though more circles are filled in for the final two tiers, customers don't gain much from paying more for their “extra” benefits. 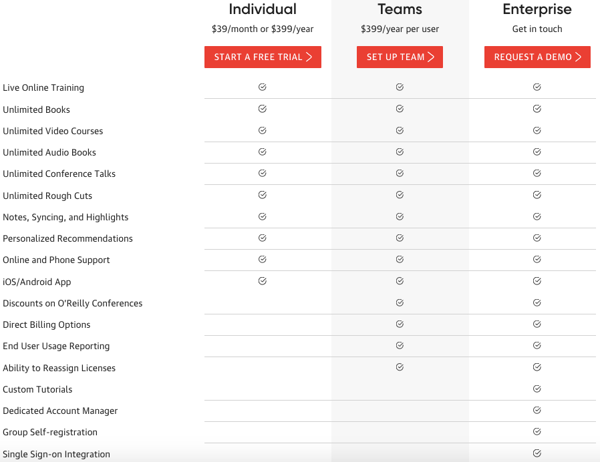 The Individual tier is by far the most appealing and includes almost everything that someone would want from an online platform for $39 a month or $399 a year.

The Teams tier is the exact same annual price with the addition of Discounts on O’Reilly Conferences, Direct Billing Options, End User Usage Reporting, and the Ability to Reassign Licenses. While the end user and licensing reassignment are worthwhile for team management, the discounts and direct billing aren’t altogether that appealing.

The Enterprise package adds a few more customizable options but also doesn’t feel like it’s been targeted to a specific subsection of O’Reilly’s current customer base. All in all, it feels really old school, like O’Reilly is a publishing company that just slapped together a subscription pricing page based on what they’ve seen around.

Take a look at a value matrix that plots the relative preference of features against overall willingness to pay (WTP) below. We see a lot of opportunities for better feature differentiation between these tiers. 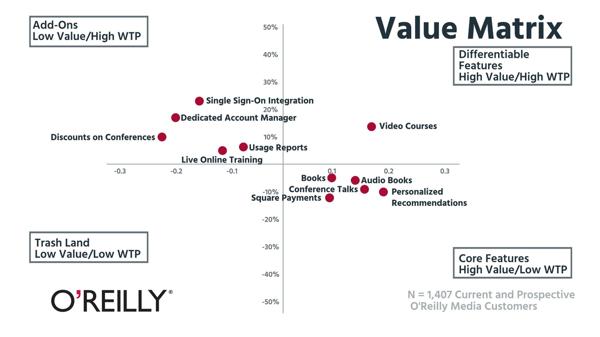 Value matrix based on 1,407 current and prospective O’Reilly Media customers.

The Core Features quadrant is pretty much on par for what we would expect from a publishing company, with Books, Audio Books, and Personalized Recommendations considered table stakes. There’s also not a lot going on in the Differentiable Features quadrant. O’Reilly does offer webinars as a part of their platform, but it isn’t their main focus.

Add-Ons is where things really start to get interesting. O’Reilly already offers Discounts on Conferences and Usage Reports in their Teams tier (which, again, is the same price as the Individual on an annual basis). The addition of a Dedicated Account Manager and Live Online Training and Single Sign-On Integration to the Enterprise package make a bit more sense.

The biggest takeaway here is that these Add-On features offer a huge opportunity for expansion revenue, and O’Reilly isn’t doing anything about it. With some simple repackaging of their Teams and Enterprise tiers, they could definitely tap into the revenue potential of features they’re giving away for free.

Just look how low the value is for Discounts on Conferences in this quadrant. If O’Reilly started giving away those discounts as a perk to existing customers, it would make a much bigger impact on loyalty, boosting trust and perceived value in their brand much more than a Premium tier feature ever could.

“When you average out your pricing, you make no one happy. You’re too expensive for a lot of people and you’re underpriced for the rest, which ends up meaning you don’t capitalize on the willingness to pay of half of your customers.”

O'Reilly is way underpriced, period. Their next move should be to target specific types of buyers with different pricing tiers. Right now, they’re not taking advantage of anyone’s willingness to pay, and that means they’re leaving lots of potential revenue on the table.

We looked at the monthly willingness to pay based on user experience first, trying to see who their Individual tier really appealed to. 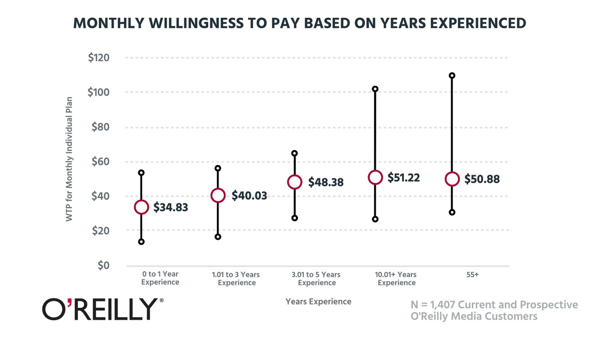 Monthly willingness to pay for O’Reilly Online Learning based on overall job experience.

Right now, their $39 a month fee is just slightly above the lowest possible willingness to pay for people in the 0 to 1 Year Experience segment. That’s not good because these people are likely just getting out of college or another training program and feel like they’ve already spent a lot of time learning and honing their skills.

O’Reilly could easily start charging up to $50/month and targeting users with 3.01 to 5 Years Experience. That would put them in a great spot that’s basically in the middle of the median willingness to pay for all of the current and prospective O’Reilly Media customers we surveyed. And it’s still under for a lot of them.

When you get into the 10.01+ Years Experience and 55+ segments, the ranges are really high. It wouldn’t be out of the realm of possibility to start offering a Premium package aimed at continued learning for upper-level management, who’ve been around longer and are familiar with the O’Reilly brand.

We see some worrying trends in the annual willingness to pay based on whether or not a company has an existing training program as well. 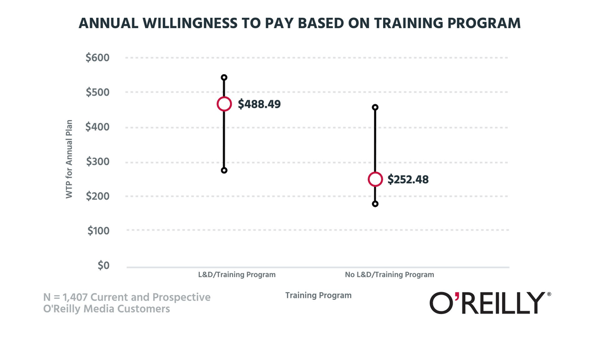 Annual willingness to pay based on whether a company has an existing training or learning & development program.

Now, if they were to increase their prices to tap into the increased willingness to pay of one segment, that would cause problems for the other. It’s paramount that O’Reilly digs into their existing customer base and starts making decisions based on who is already providing them with the most value.

They may end up needing two different tiers to satisfy these two groups, but if companies with an L&D/Training Program already make up a significant amount of their customer base, it would make more sense to go after only those users instead.

Bad pricing can hurt even the most authoritative brand

Overall, we both find O’Reilly’s pricing pretty underwhelming. They have a huge opportunity to capitalize on their established status in the industry. Peter gives them a round 6.0 because of this. I go a bit higher at a 6.7 but with the understanding that it’s not their price that bumps up the score; it’s their potential.

Right now it feels like O'Reilly has pieced something together last minute, and it could start causing them issues in the future. O’Reilly does still have competition in the market and, with a little bit of work, their pricing could put them in a position where they can't lose.