Today, we're digging into the pricing strategies for arguably two of the biggest names in technology: Microsoft and Google. Microsoft is currently doing $89.95 billion in revenue with 120 million subscribers. Their ubiquitous office tool, Office 365, is one of the most popular in the market. Google sports huge numbers as well, doing $109.8 billion in revenue with over three million G Suite users.

Both companies are super successful in their own right but their pricing pages couldn't be more different. Office 365's pricing is so confusing that I don't even really understand what package I'm on. G Suite is the complete opposite, they use a simple tiered structure on a pricing page that's very easy to understand.

Even if Google and Microsoft are doing completely different things with their pricing strategy, it's clear to see that they're both getting something right. Let's take a look at the data and show how each of these technology titans is seeing success in the market.

“This is basically folks who have looked at it and thought, 'do I want to quibble over $5 to $8 dollars for you to be completely confused and take up a salesperson's time? Or do I just want to let you get started?' Google has taken the former path to say 'let's just make this super simple.”

G Suite's pricing page is straightforward and easy to understand. They offer three packages on a per user, per month basis. The $5 Basic package can get anyone through the door, the $10 Business package offers some additional features as well as unlimited storage, and the $25 Enterprise package is G Suite's up-market option for large businesses. 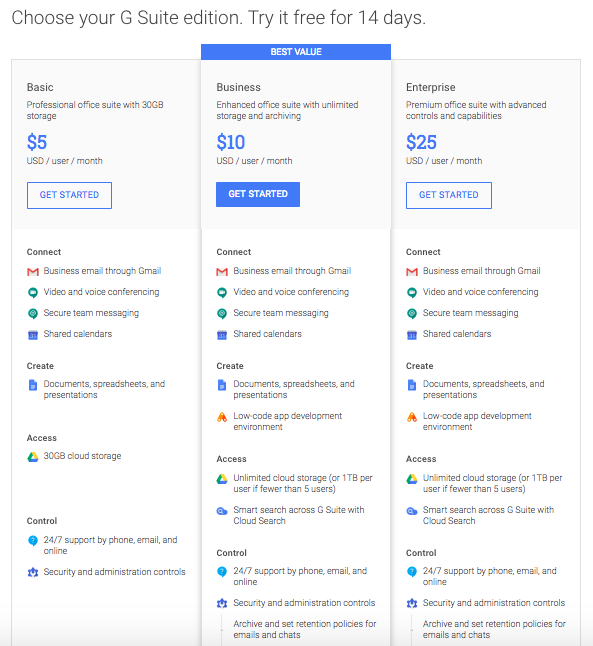 Each package differentiates on features to target a specific kind of buyer persona. We surveyed 7,291 current, former, or prospective customers of both Office 365 and G Suite and their feature preferences tell a straightforward story as well. 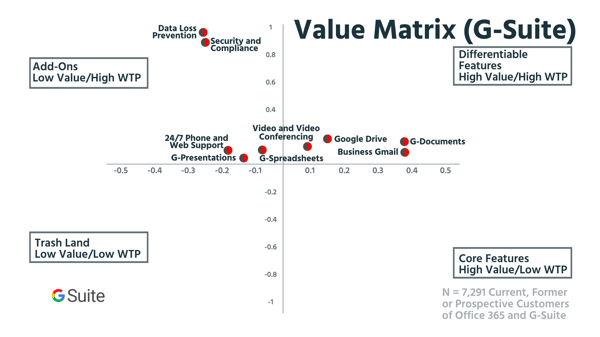 When we take a look at the Differentiable Features, it's clear to see that G-Documents is the most important, as is the option for Business Gmail accounts and Google Drive. Their Video and Video Conferencing option lands there as well. What's interesting is that features like G-Spreadsheets and G-Presentations move into the Add-Ons section and Google still offers them at each pricing tier.

It's not surprising to see Data Loss Prevention and Security Compliance in the Add-Ons section as well; these are typically more interesting to enterprise customers and not everyone is going to want to pay for them. None of G Suite's features land in Trash Land or Core Features, which means that everything Google has to offer their customers is driving value.

When we take a look at the willingness to pay data for G Suite based on customer role, there is some room for improvement with Google's current pricing structure.

For IT Decision Makers, the Enterprise package is pretty much spot on, but G Suite could bump the price up by an additional $5 without any real issue. For the $10 Professional and $5 Basic package, G Suite is underselling themselves. Both Business Decision Makers and Business Non-Decision Makers are willing to pay almost twice as much. G Suite could go up close to $10 in each case without moving outside of their customers' willingness to pay.

When we take a look at the willingness to pay per user based on team size, G Suite gets closer with their current packages. 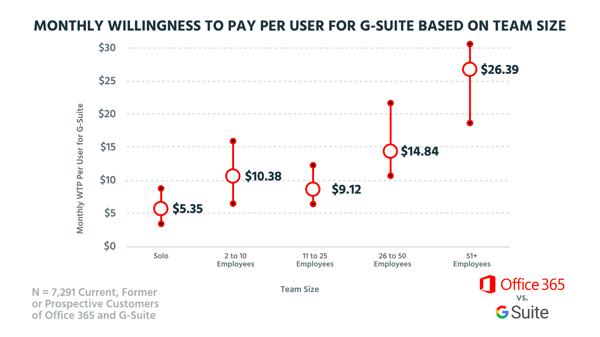 For Solo teams, the $5 price point is right on with the $5.35 willingness to pay, but we see some flattening between the 2 to 10 Employees and 11 to 25 Employees tier. While G Suite's simplified pricing tiers are great for getting customers in the door, they could potentially drive more value with additional add-ons or packages. That said, the 26 to 50 Employees and 51+ Employees tiers get them back on track. But again, with the willingness to pay at $26.39 for larger teams flexing up to over $30.00, G Suite could probably up their Enterprise package without issue.

Google is really going after acquisition with their simplified pricing tiers, and it's a great competitive advantage over Microsoft's more confusing price structure. The differences we're seeing in willingness to pay mean that Google could likely price G Suite higher without turning people away. Running a few tests to increase their low- and mid-tiers would be a great step forward for them.

Microsoft goes up-market with the features to justify it

To say that Office 365's pricing is confusing is an understatement. Take a look for yourself. Their pricing page is one of the most confusing we've encountered and it makes for a terrible pricing experience.

With that out of the way, Microsoft actually does a pretty good job of pricing their features in line with the 7,291 current, former, or prospective customers we surveyed.

Their Differentiable Features include almost everything a customer needs to be successful. Microsoft Powerpoint, Excel, and Outlook are all high value and people are willing to pay for it. They're also willing to pay to always keep the product updated. Microsoft Word ends up as the only feature in Trash Land, which is a big difference from the value customers got from G-Documents.

You see the same kind of Data Loss Prevention and Security Compliance in Add-Ons. The Enterprise customers value those features but not really anyone else. It's interesting to find Skype for Business in this section as well. Typically, that's bundled with most pricing packages Office 365 offers and people aren't really willing to pay for it.

When we take a look at the willingness to pay per user for Office 365, based on the role, you see a similar pattern to G Suite. 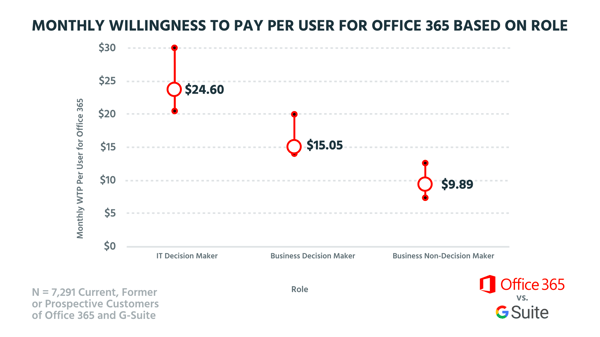 While there's a lift for IT Decision Makers, Office 365 is pretty much on point with their pricing for Business Decision and Business Non-Decision Makers. You see Microsoft nailing the willingness to pay based on team size as well.

As team size increases, the willingness to pay goes up as well. This is in line with G Suite and not all that surprising. The larger a company, the more their needs lean towards Enterprise features around data security and privacy. What's interesting is that the willingness to pay for Office 365 is slightly higher on the low end than G Suite. Even though Microsoft's pricing is confusing, each feature they have is driving value.

We pulled some information on willingness to pay per user based on feature preference as well, specifically an Excel-only package and some more Enterprise features. 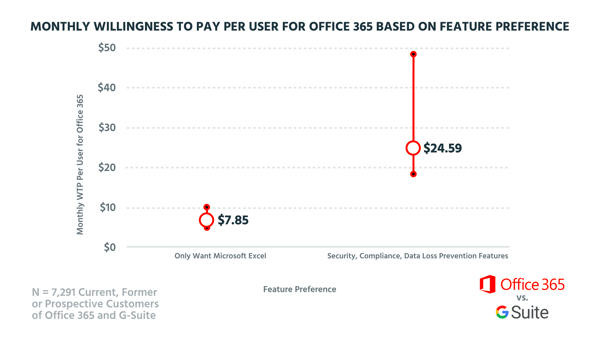 The 7,291 current, former, or prospective customers we surveyed are willing to pay $7.85 a month for Excel only. As one of the differentiable features of Office 365, it's much higher valued than G-Spreadsheets. The more Enterprise features like Security, Compliance, and Data Loss Prevention get a much higher price tag, swinging between around $20 up to $50 a month.

Even though Microsoft is pretty much on point with the willingness to pay from our survey, they're still likely going to see issues with the overall pricing experience. Office 365 is very well known, and they can probably get away with it considering their reputation, but they should optimize their strategy as well. Going after Enterprise customers is still their best bet; the competitor with G Suite at the low end likely won't benefit them in the long run.

Microsoft is going after the higher-end customers with their robust feature differentiation where Google is aiming a bit lower with their pricing and trying to get people through the door. While each company is competing in the same market, they both understand the range of customer to go after. Microsoft pretty much wrote the book on superior office tools and Google knows not to beat their chest and take that on.

Peter would go for G Suite as a user. He's familiar with the features and has worked with their tools in the past with success. I'd go for Office 365, but reluctantly. If I could get Excel by itself it'd be a different story, but as it stands G-Spreadsheet just doesn't cut it.

Even though Peter goes for Google as a user, he'd put money in Microsoft. They've recently brought on new leadership and are trending towards some interesting changes. I'd go for Google. Microsoft is full-featured and definitely an established company in the market, but are making the assumption that everyone needs them and that likely won't work out in their best interests over time.

This week we go to the land of time and tear down Hubstaff's pricing options.

In this episode of Tradeoffs, Patrick and Hiten take a look at two titans in the office productivity space, G Suite and Microsoft Office 365.