Complete Guide to The Psychology Behind Odd-Even Pricing [+Examples]

JCPenney conducted a pricing study in the early 1900s. Through the study, the department store came to the conclusion that when someone saw a price ending in 7, 8, or 9, they felt they were getting a deal and the odd number created a sense of urgency to purchase. Research has since expanded, concluding that if you want to be perceived as a “luxury” good, then your prices should end in an even number, such as 0 or 5. If you wanted to be perceived as discounted, then you end prices in an odd number, like 7 or 9.

Here we are, more than 100 years later and that JCPenney study is still relevant to consumer trends. Odd-even pricing tactics are commonly used in many purchasing places—retail and restaurants—but what about SaaS?

Let’s walk through the ins and outs of the odd-even pricing method, show you some examples, and see if it’s a good SaaS pricing strategy.

What is odd-even pricing?

Odd-even pricing is a psychological pricing strategy similar to charm pricing. It refers to using a numeric value to impact the customer’s perceptions of the product value. The goal of odd-even pricing is to make small pricing adjustments that will drive sales and maximize profits. The “odd” part of this tactic refers to a price ending in 1,3,5,7,9, while the “even” part refers to a price ending in a whole number in tenths, such as $0.20 or $50.

The psychology behind odd-even pricing

Odd-even pricing has a psychological effect on consumers. Using either an odd or even number plays into a customer’s psyche.

For example, a $20 item marked $19.99 is perceived as cheaper because the number is still in the “teens” rather than the “twenties”. Even though the difference is in just one cent, customers perceive the price as lower than it actually is. Odd pricing creates the illusion that the product is tagged at the lowest possible price. Additionally, since the number is so specific customers perceive it as honest.

When it comes to even prices, it’s the opposite effect. Customers will see a number rounded up, like $1,500, and perceive it as a luxury item. Since it has a round number, the product is perceived at a higher value.

Industries that commonly use an odd-even pricing strategy

You’ve seen odd-even pricing everywhere, whether you realize it or not. I’ll share some common industries that take advantage of this strategy in just a bit. So, next time you’re out shopping or eating, take note of the prices and see if odd-even pricing applies.

Almost every retail store employs an odd-even pricing strategy. If it’s not all year round, then definitely during a promotion period. You may see a sign outside the store that reads “All jeans, starting at $29.99.” Even though it’s technically a starting point for the sale price, since the number is less than 30, it’s perceived as a good deal.

On the other hand, you may walk into a designer purse store and absolutely nothing is on sale. All the prices are even numbers. That’s to be expected because it’s a luxury item.

If you’ve ever been to a family-style, chain restaurant, you’ve seen odd pricing. Many restaurants will advertise “3-course meal for only $9.99.” They price this way because they are advertising toward families. Most families want an affordable meal, and by using odd numbers for ending digits, it’s perceived as cheaper.

On the other hand, high-end restaurants would never advertise a deal with an odd number. You will also never find a three-course meal for less than $10. There are people in the world looking for a luxury meal, so by not using odd numbered prices, they cater to those individuals.

Let’s look at some real odd-even pricing examples. One industry that commonly uses both sides of the odd-even spectrum is jewelry.

First up, odd pricing. Let’s look at Kay Jewelers. Everyone deserves to feel glamorous and have access to beautiful jewelry…but not everyone can afford some of the prices.

This is where Kay Jewelers, and other similar jewelry retailers, save the day. On the home page, there are advertisements that read, “GIFTS UNDER $199. Or “24.99 SELECT HEART JEWELRY.” 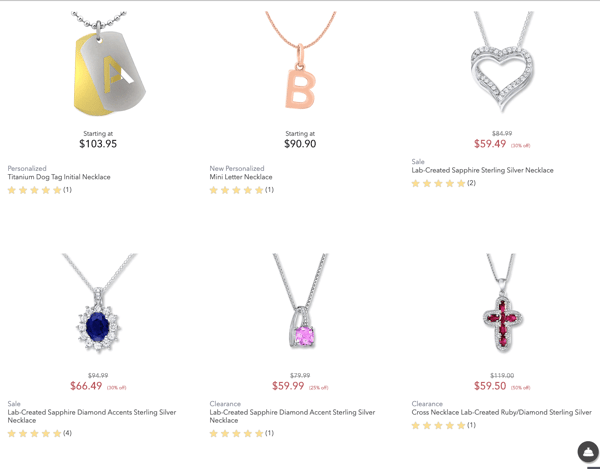 And then there’s Tiffany & Co., which is notoriously known for people who can enjoy the really fine things in life. Its prices are proof. For one, you have to scroll your mouse directly over a piece of jewelry to see the price. The fact that the prices aren’t openly displayed also signifies that it is luxury. But, once prices are revealed, they are priced in even numbers, like “$2,200.” And there are no discounts because the people shopping at Tiffany & Co. don’t care about discounts.

Advantages and disadvantages of odd-even pricing

Let’s start with some potential benefits of odd-even pricing.

Pricing something like “$9.99” may encourage people to buy without thinking because they'll see it as a low price. Odd pricing often resonates with customers as a discount, so when customers see the odd numbers they may not think too hard about the overall cost of the purchase.

Since customers feel they are getting a discounted price, they are more likely to buy more. Additionally, ending your prices in odd numbers makes it more difficult for people to add up the total cost. Typically, people will end up estimating and purchasing more.

Some of the not-so-great consequences of odd-even pricing:

Customers who are purchasing because they perceive the product as a deal are not great for LTV and retention. Likely, they are one-time buyers and only purchasing because of the perceived discount. However, if your small business operates in retail or another industry that thrives off of one-time sales, then this does not apply. In SaaS, though, you want a pricing strategy that boosts LTV and retention.

By ending prices in odd numbers, customers may mistake you for a discount retailer or if you choose to discount in even numbers, they perceive you as luxurious. This can be prevented as long as you carefully select the price that fits the value of your product.

We do…assuming the company has done all their research ahead of time. If your only monetization strategy is to price your products around 9s, that pricing strategy is unlikely to be a successful one. There are also big differences when you price your product at $99 vs $100 (we recommend keeping it at $99). We think it’s best to start with a value-based pricing strategy and understand the range you should be charging.

What was the initial reason for odd pricing?

Originally, the intention of setting odd prices was to force the cashier to open the register to give change and in that way record the sale. Round numbers, on the other hand, would make it easier for the cashier to pocket the money.

What is odd price odd pricing?

Odd price odd pricing means using odd numbers for the end digits of a price. For example, a business might choose to price its product $9,99 instead of 10$ to make the product appear much cheaper. It relies on the assumption that consumers focus only on the first digits when they look at the product price.

Do odd or even prices sell better?

Generally speaking, odd prices are seen as lower and are considered a better deal, which is why odd numbers are used when a business wants to motivate shoppers to buy their product. Even prices and round numbers are usually used for premium products and to target consumers who are not price-sensitive.

Economy pricing has razor-thin margins, but is it a smart pricing strategy to employ when you sell in high volume? Our experts weigh in.

What is Promotional Pricing & Is It The Right Strategy For You?

Learn what promotional pricing is, if it's right for your business, and what to consider when implementing promotions as a strategy.

Learn the basics of tiered pricing models, how to implement them, and why this pricing strategy is a growth driver for your subscription business.

What is predatory pricing: Examples, definition & when is it illegal?