Good Better Best is a weekly deep dive on pricing and packaging strategies written byRob Litterst, who helps head up our pricing team. Each issue features analysis of a specific packaging case study readable in 5-10 minutes.

If you’re in tech or follow it closely, you likely know about Notion.

The all-in-one workspace has been the talk of Product Managers everywhere. They use minimalistic, New Yorker style imagery throughout their website to create a hip, whimsical design aesthetic. They recently raised $50M at a $2B valuation in a round that supposedly came together in 36 hours.

[Note: Nathan Baschez and Adam Keesling over at Divinations did a great write-up on their valuation here.]

I was planning on writing about Notion’s packaging this week anyway, and then they made an update mid-week!

The update, though seemingly subtle, is actually a big deal. By giving away their Personal Plan for free, Notion has decided to commoditize personal knowledge management.

When asked about the change, Notion’s COO Akshay Kothari said:

“The biggest motivation is just capturing market share - getting more people to use Notion.”

There are deeper implications for Notion and their competitors in the knowledge management space, but before we get there, let’s talk about their old free plan, their new free plan, and what this update means strategically.

In Hackers and Painters, Paul Graham talks about the importance of empathy in designing software, calling it the single most important difference between a good hacker and a great one.

His point is that the best engineers place themselves in the user’s shoes and build with their perspective in mind. I believe the same concept of empathy applies to a pricing page, especially if you have a self-service model like Notion.

Upon raising funding in early April, Notion had ~4 million users and ~50 employees. That’s ~80,000 users per employee, making it crucial that a new user can visit the pricing page and understand which package is right for them without speaking to a human.

Before this week, Notion had one of the more empathetic pricing pages I’ve ever seen. A user could tell which plan suited them within 10 seconds of being on the website. 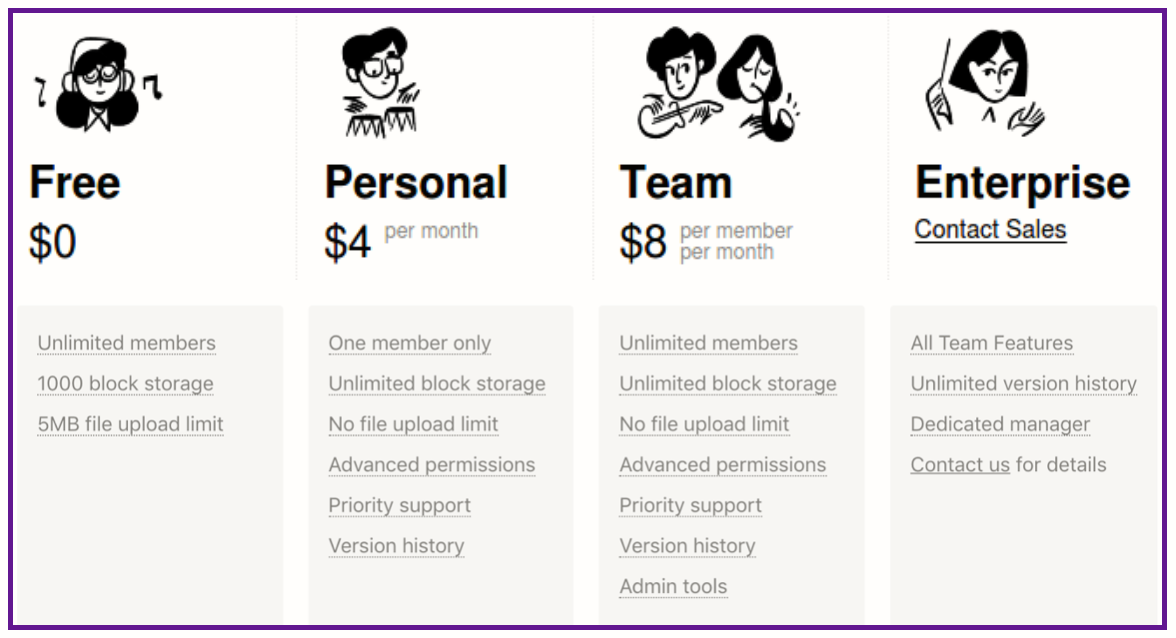 Their old free plan fit into this packaging model as a universal option for both Personal and Team users to try the product. The plan allowed unlimited users to access core functionality up to a limit of 1,000 blocks (their term for content units).

At ProfitWell, we call this is a “Faux Free” plan - you get free access to a product up to a certain level of usage, at which point you need to upgrade to a paid plan. On the positive side, this strategy helps companies prevent cannibalization of their core offering, but on the negative side, it can inhibit adoption.

Let’s compare that to their updated packaging: 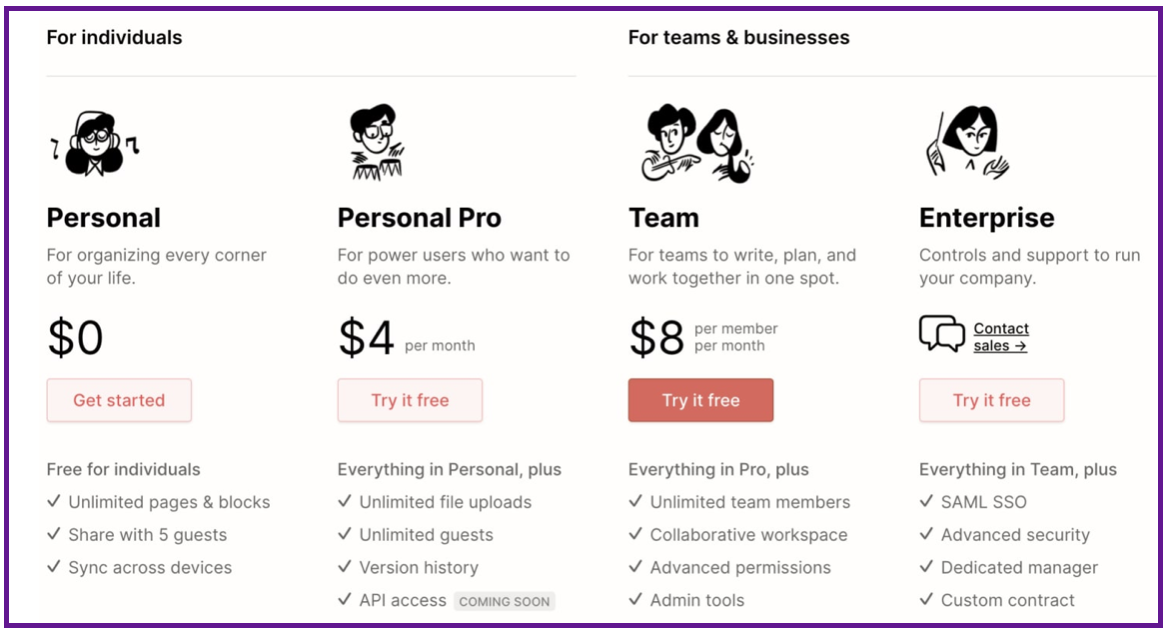 [Note: The old free plan is still available as a free trial by clicking “Try it free” on any of the paid plans.]

In the new model, the Personal Plan, which was $4 per month previously, is now available for free.

The new Personal plan is what we would call a “Perpetual Free” plan, which is where you give away the core product for free, and monetize additional functionality separately. This is exactly what Notion is doing, giving away core functionality, and monetizing collaboration features in the Personal Pro, Team, and Enterprise plans.

This is important, as Notion’s product is better-suited for teams than any of their closest competitors in the knowledge management space. This update shows they’re leaning into their biggest strength, and willing to go to the extreme to do so.

While their pricing page now takes a little bit longer to comprehend than before, the outcome is a huge positive for new users. Let’s talk about the implications for Notion, their competitors, and what this means for Notion’s overarching strategy.


Get Good Better Best delivered to your inbox

The bad news? There will be revenue cannibalization.

I say this as an existing Personal user who was automatically moved to Personal Pro and downgraded. I love Notion. I use it every day and it’s one of my favorite apps, but even I don’t want to pay them if I don’t have to.

My Notion usage is completely personal, and I don’t need to share my account with guests or use their API any time soon, so I have no reason to use Personal Pro and imagine the majority of personal users are in the same boat.

The good news? To Kothari’s point, they will definitely capture market share.

Power-users of knowledge management apps saw Notion's 1,000-block limit as a barrier to getting started. By removing this limit for personal users, they’re opening the floodgates to a wide audience that has been waiting to try their product.

The revamp shows Notion is willing to trade revenue for market share. I love this move for them and believe the benefits of user acquisition will far outweigh the downside of cannibalization.

And that’s before we even get to the impact this will have on their competitors.

Implications for the Competition

If you’ve been down productivity rabbit holes as I have, then you know it’s a quirky space. Preference for particular apps is often underpinned by philosophical differences in knowledge management, and learning how to use a tool is akin to learning a new language. That’s why there’s such a ripe market for online courses that show you how to get the most out of your chosen tool, for example:

If you’ve ever used Notion, you know there’s a bit of a learning curve compared to a traditional note-taking app like Evernote. By removing the 1,000-block limit, Notion is removing one of the biggest barriers to fluency. This is bad news for competitors.

Having used Notion and Evernote, Notion is objectively a better tool for teams. There’s more you can do, and collaboration is native to their application.

That said, Evernote can be a more effective tool for personal knowledge management if you’re looking for conventional note-taking functionality.

By giving away the personal plan for free, Notion is going after Evernote Premium users, who currently pay $7.99 per month. Even if Evernote is the better tool for what these users are trying to do, many of them will likely be open to trying a free app with comparable functionality.

Notion has always made it easy to migrate from Evernote. On their website, there’s an entire landing page dedicated to switching over, including a cute visual of users dismounting the Evernote elephant: 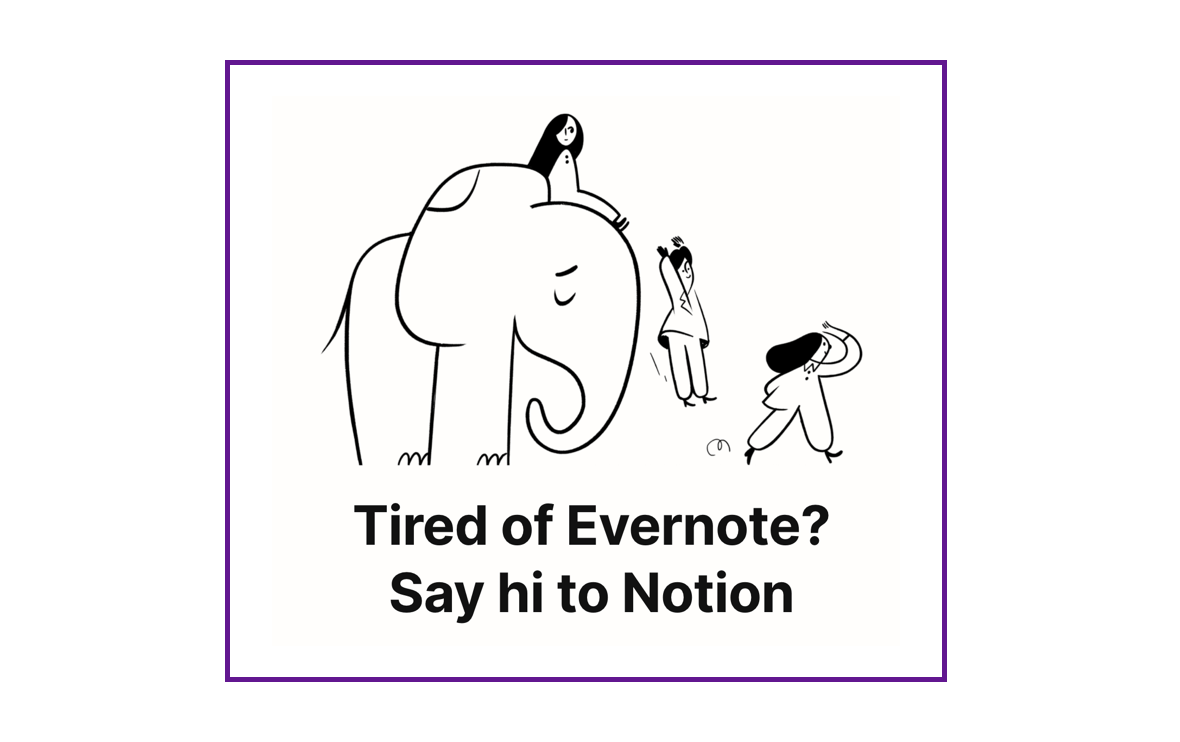 The 1,000-block limit on the old free plan prevented serious Evernote users from trying Notion, but now there’s nothing holding them back. I predict Evernote will be forced to respond in some way very soon.

With Evernote, Notion is playing offense. However, this strategy is also defensive, specifically with the new kid on the knowledge management block: Roam Research.

Productivity Twitter has been buzzing about Roam Research like crazy over the past couple of months, and there’s no doubt the Notion team has caught wind of the positive feedback.

Roam Research founder Conor White-Sullivan is plugged into this crowd and understands the importance of reaching tastemakers. He’s also fully embraced Roam’s cult-status and branding as shown in his response to a proposed redesign below: 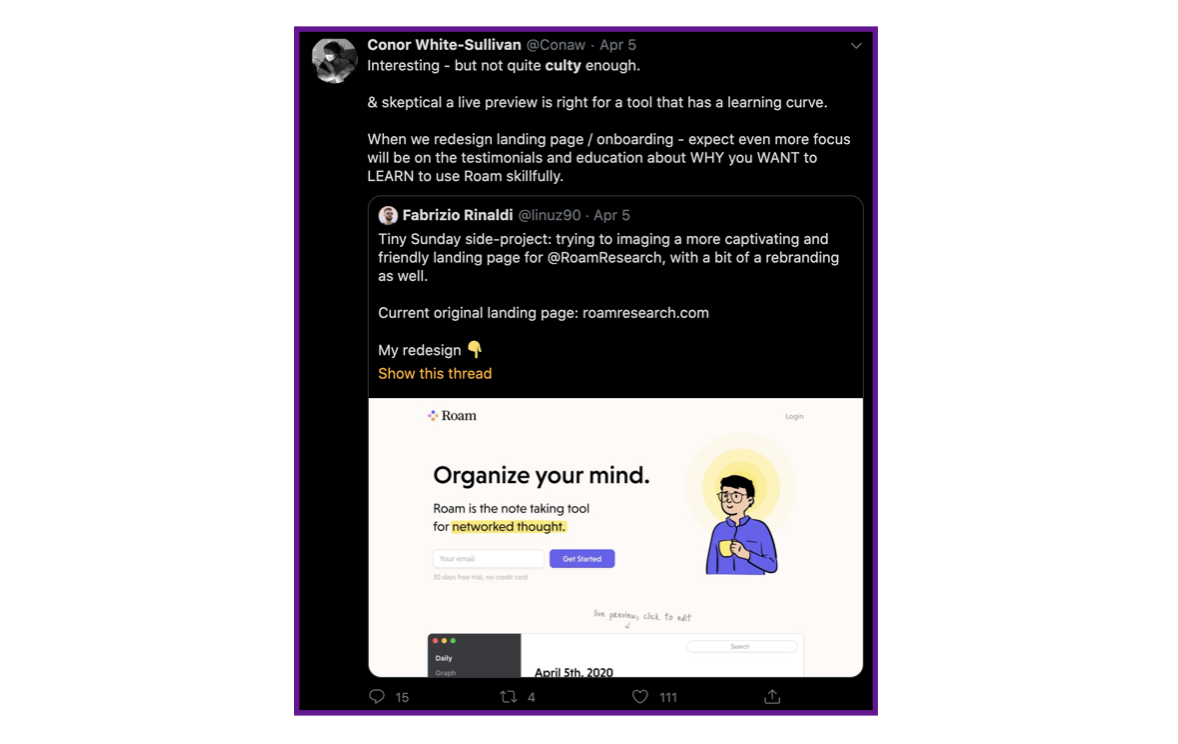 In an interview with Erik Torenberg on the Venture Stories podcast, White-Sullivan mentioned his aspirations for Roam to evolve into a collaborative tool for teams, but currently, the tool is limited to personal use.

Giving away the Personal plan for free allows Notion to catch individual users that would otherwise be tempted to try Roam.

In one fell swoop, this move will incite churn among Evernote’s customers, stifle Roam’s acquisition, and boost adoption for Notion, and that’s just the immediate impact.

This move has an even bigger implication long-term.

By commoditizing personal knowledge management, they’re putting a ton of pressure on both Evernote and Roam to differentiate their personal products effectively or follow Notion upmarket to team products where Notion already has an edge.

This move shows that Notion is thinking about the long game. They’re trading short-term monetization for market share and the promise of product-led growth down the road as more users learn to use their product.

Needless to say, I think this is a gangster move for Notion and would think so even if I still had to pay for it 😎

Notion goes back to school

In this episode of Recur Now, we dive deep into Notion's genius move into the education market.