Face it, nobody cares

Today, we take it back to school—product school. We also take a look inside subscription education. And Ben Horowitz reminds us: "Nobody cares."

"Higher education is in a bubble in which trillions is being invested in something that works for a small minority of people."

That’s what Jolt founder Roei Deutsch is saying, after raising $14.1 million in Series A funding. Jolt is an education startup that describes itself as an alternative to traditional MBA courses, a pay-monthly business school.

With Jolt, students accumulate—and pay for—only the classes they need to build their own diploma. And if they don’t want to complete the full program, they don’t have to. Operating on a monthly rolling basis, courses can be paused for financial purposes or time management.

Students sign up for lessons through the Jolt app and attend them at their nearest campus. Lessons are offered largely in the evening to help students study alongside their day job. Once they’ve completed a lesson or section, they are given a qualification that can be used immediately or set toward a wider diploma. The lessons and workshops revolve around practical application of the skills, debates and discussions, and other interactive tasks.

During Deutsch’s exposure to the Israeli Defense Forces, he says he witnessed regular people being turned into intelligence officers within just months, which proved that the military and other government organizations are effective at training people, while the rest of the population is seemingly suffering from education that’s not always good enough.

"This led us to question why traditional, centuries-old private and government-led educational institutions seem to struggle to achieve such results, which motivated us to build an alternative higher education option.”

Jolt’s funding has reached $23.3 million in three years, and we have high hopes for the future of this subscription education.

Back to (product) school

And with more in schooling, we’re headed to UserPilot’s Product Adoption School, as the team there sets out to help drive more consistent "aha! moments" along the user journey.

We’re talking things like: building a solid onboarding process, mapping your user journey to complete adoption, detecting dropouts in the user journey plus hypothesizing effective solutions, and choosing and building the right product experiences for your onboarding.

You can get all the lessons at once, or have them delivered to your inbox in waves. It’s all free and it's all yours.

Onboarding can be (and should be) leveraged to effectively increase your trial to paid conversions substantially.

Here's a talk and full slidedeck, that three-time Founder Rob Walling gave at our headquarters back in 2017, on how to double your trial to paid conversion rate with the power of onboarding.

We also have a talk given by Appcues’ Jonathan Kim, on boosting retention by utilizing tactics like strong onboarding, plus an episode of ProfitWell Report during which we answer how a company's onboarding process impacts retention and willingness to pay.

Nick Mehta, CEO over at Gainsight, tweeted out a nice little reminder this past weekend. Albeit somewhat gratingly straightforward, it’s frankly the mid-January kick in the butt we needed. 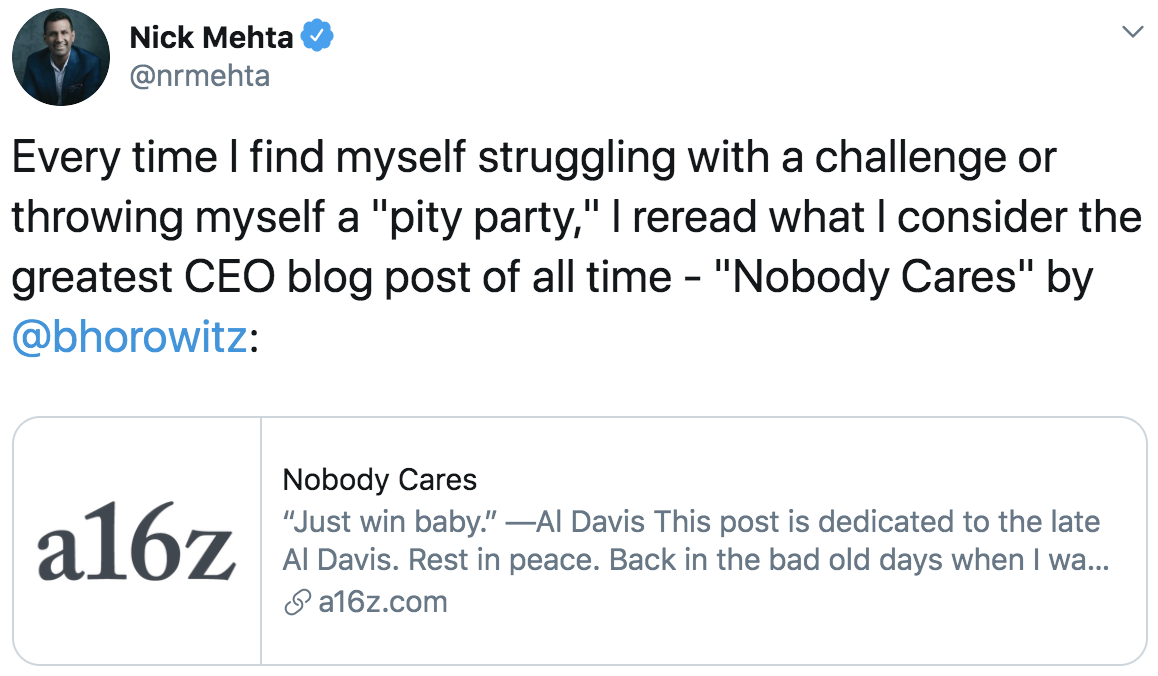 And since we know and admire Nick, we took a read-through ourselves. In the post, Ben tells a story of Bill Parcells, former New York Giants coach. In his first season as coach, his team was hit with a bunch of injuries, so he worried deeply about the fate of their performance.

"When his friend and mentor Raiders owner Al Davis called Parcells to check in, Parcells relayed his injury issues. Parcells: 'Al, I am just not sure how we can win without so many of our best players. What should I do?' Davis replied: 'Bill, nobody cares, just coach your team.'"

And apparently, that response resonated with him. Ben reminds us that all the mental energy we use to elaborate our misery would be far better used trying to find the one, seemingly impossible way out of our current mess.

It’s a quick read, but a good reminder that amid trying times and what can feel like turmoil, we need to re-center and come back down to Earth.

And that’s a wrap for your January 15 subscription news. If you're not signed up for daily news, head to recurnow.com to receive them straight to your inbox.

If you have anything you want to share, hit me up at abby@recurnow.com and we'll collaborate.

In this episode of Recur Now, a tribute to American venture capitalist Don Valentine.

In this episode of Recur Now, what's going down in D2C?

Who's the Newest Member of the SaaS Class?

In this episode of Recur Now, it's acquisition central.