Welcome to the first-ever episode of Tradeoffs, where Hiten Shah (of FYI and Product Habits) and I talk through the product decisions of popular companies and the potential tradeoffs they made as a result. We break down how these choices shaped the growth of these companies and what it means for their future. Starting it off is our conversation about online streaming juggernaut Netflix.

You can listen to episodes of Tradeoffs on Apple Podcasts, Spotify, or wherever you listen to podcasts. There's also a full video version below so you can pick and choose your own adventure.

As one of the most popular and longest-running streaming services in the market, Netflix took a DVD rental service and transformed it into a cultural icon. We’ll show you how their relentless focus on quality content positioned the platform for impressive growth and how that has to change as the market evolves and expands.

Table of Contents:
1. The Tradeoffs
2. Netflix is a first mover in subscription entertainment
3. Nailing product-market fit made Netflix a part of our culture
4. A good NPS score doesn't mean Netflix can rest on their laurels
5.  Everything comes down to content

Netflix is a first mover in subscription entertainment

From the beginning, Netflix solidified their position as the preeminent streaming entertainment service in the market. Starting out with DVD rentals back in 1997, they moved to monthly subscriptions in 2000, followed by “Watch Now” streaming in 2007. Throughout their lifetime, Netflix has consistently been at the forefront of change in the market. So how did they do it? With a singular focus on providing the best possible content to their customers.

Hiten and I wanted to understand why people care about Netflix’s product, so we could get a general sense of how this emphasis on content helped the company grow. The question we asked was: What is the primary benefit you get from Netflix? And, to no one’s surprise, the answer was content.

These top three answers make up 40% of the total responses. In fact, content differentiation made up more than half of all responses. While these results validate Netflix’s content-first strategy, their singular focus on content did come with some tradeoffs. By doubling down on creating and licensing different types of content, they chose not to capitalize on merchandising opportunities. They also ignored features like live events (streaming sports and TV) and never used ads.

“It’s always going to be about the content. They can make the platform convenient, but if the content’s not there, no one is going to care.” Hiten Shah

We also found that 86% of respondents have recommended Netflix to a friend, which is huge. 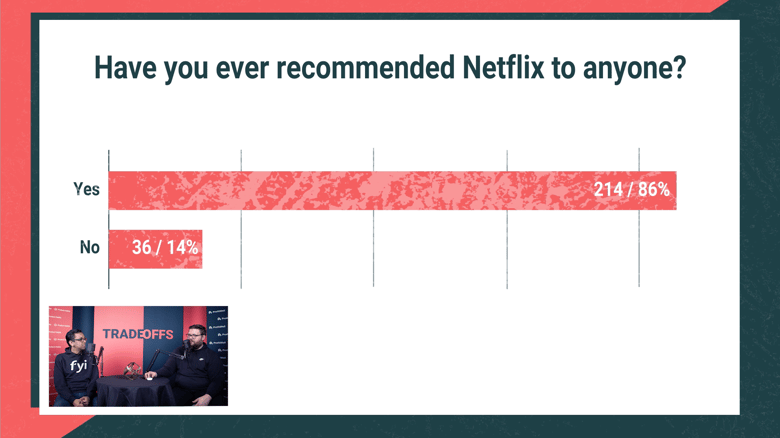 Normally, we’d only see a percentage this high for a free product. But it goes to show how Netflix’s focus on creating unique, high-quality, and varied content impacted their growth.

The problem with this is that the market continues to grow and niche down, with companies like HBO, Disney, and DC Universe all creating their own individual streaming platforms to house proprietary content. This means that Netflix isn’t going to have as much access as they’ve had in the past, and it shows how much the market has grown.

From a product perspective, streaming services like Netflix need to understand just how much the customer values selection as part of the experience. People want to go where they can find the content they need. If a platform doesn’t offer the shows a customer likes, they can easily find another one that does.

While some people might say there are too many subscription streaming services available, the data we found supports the shift toward this model. I’ve said it before and I’ll say it again: the subscription economy is here to stay.

Nailing product-market fit made Netflix a part of our culture

Doubling down on network-style content with a small but dedicated audience helped Netflix solidify their place in the market. Where platforms like HBO focus on creating “hit” content that drives the majority of their viewership, like Game of Thrones, Netflix’s strategy mirrors old Hollywood ideas, where success comes in aggregate. They certainly have their hits, like House of Cards or Stranger Things, but those shows are supported by a litany of less popular original content like Fuller House and licensed network shows like The Office.

The aggregate engagement from customers watching their favorite sitcom over and over or the objectively small but fervent audience who watches Netflix’s original series is what makes Netflix the go-to streaming service.

The strength of their position as a top-streaming service is evident in the responses we received to this question, which is typically used to gauge product-market fit: How disappointed would you be if Netflix no longer existed? 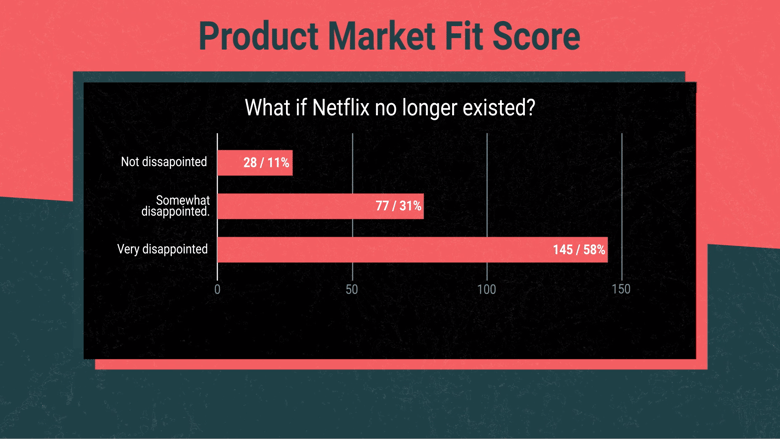 Only 11% of respondents said they wouldn’t be disappointed if Netflix no longer existed, leaving 89% who would. The reasons for this are similar to what we saw earlier when asking about Netflix’s primary benefits:

When you dig through the qualitative survey responses, themes start to appear, the most important of which is how ingrained Netflix is in many of its customers’ lives: 86% of customers said they use Netflix at least a few times per week.

That said, there’s still work Netflix can do. To see what kind of issues their platform faces right now, we asked, How can Netflix be improved to fit your needs?

It’s not a surprise to see content here as well. Consumers continue to have more and more streaming services to choose from, so differentiating on content is a big deal. Personalization and improved search also received a small percentage of survey responses.

To stay on top of the market, Netflix has to continue offering the type of content that customers want. Right now, the fact that 52% of customers stream daily helps Netflix justify a price that's in the top ranges of willingness to pay. Our data signals that this won’t always be the case if Netflix doesn’t double down on giving the customer what they need. Which competitors stand to gain the most if Netflix fails? We asked, What would you use as an alternative if Netflix were no longer available?

What’s interesting to see is how low the value is for cable at this point. It goes to show how much the entertainment landscape has changed with the rising popularity of on-demand streaming platforms, and just how much competition Netflix has for their slice of the market.

“In the early age of Hollywood, there were tons of movies being filmed with tons of different types of content, and a win wasn’t a major blockbuster necessarily. A win was covering costs and then some.”

For a consumer company with a wide user base like Netflix, their NPS score is pretty strong. On a -100 to 100 scale, they scored a 34. That means that customers are more or less satisfied with the product, but not so much so that they’ll stick around if issues arise. Based on the NPS survey feedback, we see that content differentiation is still the most important feature for subscription streaming companies.

That’s scary from a product manager perspective. We’re moving closer to peak content saturation, at which point Netflix and their competitors will need to find other ways to keep their customers happy. Right now, they can continue packaging international content as Netflix originals to offset the need for new original content, but they also need to understand where that effort goes to waste.

Streaming entertainment companies will need to redefine what success looks like as the market continues to change. 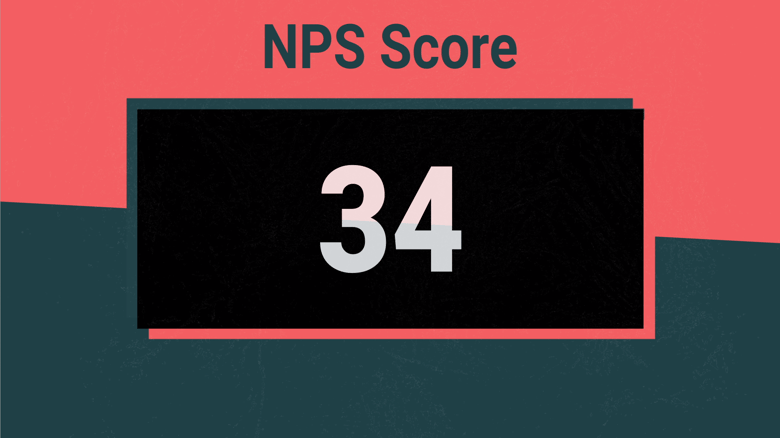 Our NPS score data shows that a lot of Netflix detractors are people who would choose Hulu instead. Why? Live-event streaming, particularly sports. That’s one of the tradeoffs we discussed earlier, but it’s not the biggest issue in our opinion.

The biggest issue Netflix faces is licensing. They can continue to create new content and license existing popular content, but we’re worried about how that impacts their growth. Without licenses to good content, Netflix will find itself in a really tough spot. The rise of services like Disney+, which holds the rights to popular content that was previously available on Netflix, makes it harder and harder to provide the same level of quality programming.

What we’re looking for is the next echelon of growth in this space. Hiten thinks it’s the ability to show the right content to the right people at the right time, which is what customers call personalization and customizability.

“If Amazon Prime and Hulu have live sports, when does Netflix get into that?“ Hiten Shah

I think that, while Netflix’s viewing recommendations are good, they don’t provide people with a lot of context on how those decisions are made. Netflix needs to focus on “being the place to find the thing” essentially and let people know why they’re making certain recommendations when there isn’t access to a particular piece of content.

To accomplish this, Netflix needs to start aggressively prompting their customers to make more profiles and making it clear why those additional profiles are valuable. I share a profile with my girlfriend, so the recommendations we get are based on both of our watching habits. That means Netflix is less specific and can’t make recommendations that are personalized to our individual preferences, which is what most customers are looking for.

Netflix is in an interesting place: The company’s ability to provide the best content possible at the right time depends on their customers performing certain actions, like creating new profiles. In a market that places such a high value on personalization, that makes it harder for Netflix to achieve their personalization goals.

Netflix’s history of making tradeoffs to focus on content helped them get to the top. But it came with sacrifices, including additional revenue streams like merchandising or advertising, which the brand could’ve used to help support their wide, diverse customer base.

The market is becoming saturated with niche-specific services that stream exclusive content. Content differentiation is more difficult. Netflix will need to change up their strategy to maintain their position as top dog.

We hope you like the first episode of Tradeoffs with Hiten. Over the coming weeks, we’ll look at other subscription companies — like Spotify and Slack — and how tradeoffs impact their growth. We’d love to hear your feedback, so let us know what you think about the new show on social media using #Tradeoffs.

In this week's episode, Patrick and Peter tear down the pricing of streaming OG Netflix and entertainment OG Disney. Should Netflix be scared by this monolith's recent foray into the subscription market? Tune in to find out.

In this episode of Recur Now, Netflix could lose millions.