Netflix and Disney are two entertainment titans with very different backgrounds. Netflix shot from obscurity to become a multibillion-dollar company in a span of 20 years. Disney is a household name that has kept on innovating and keeping up with the times over the last century.

But in the streaming world, the tables are turned. Netflix is the incumbent with Disney playing catch up. In today's Pricing Page Teardown, we are looking at what the data is saying about this rivalry. We've waxed lyrical about Netflix's pricing before, but can they continue to be the industry leader once a titan such as Disney is on the scene? Let's dive in and find out.

Why Netflix Is holding strong

The only bad thing we can say about Netflix's actual pricing page is that it's too straightforward. It doesn't do much to sell their product. 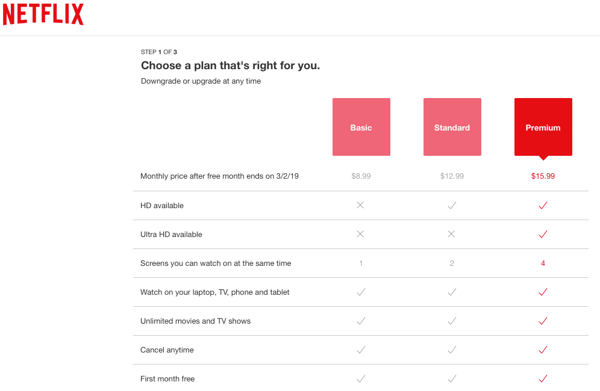 But that's because Netflix knows that they don't need to. Their product sells itself using their customers as their biggest form of advertising.

For Netflix, content is the goal. Their shows are their biggest draw, and those shows market themselves very effectively through word of mouth. If something is worth watching, it generates a powerful social media buzz, and people keep coming back to Netflix again and again just for those great programs.

Furthermore, Netflix's pricing has nailed their audience's willingness to pay. 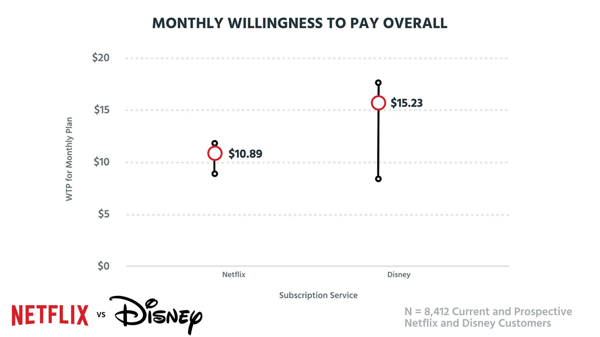 They have also recently raised pricing, as they should, without too much backlash. Pricing isn't Netflix's problem.

What might be Netflix's problem is a new rival called Disney Plus.

Why Disney should scare Netflix

Disney is a monolith. They own (ready for it?) Disney, Marvel, Lucasfilm, National Geographic, ESPN Classic, 21st Century Fox, and Pixar. Whew. That's a lot of acquisitions. And soon, all of those subsidiaries are going to be available via streaming Disney Plus.

And when we look at the data, people definitely want this content.

Netflix has been relying on their content to speak for them. But the content that Disney is packing is a huge draw. If you look at our comparative value matrix, the sought-after upper right corner is all Disney's content. This partly explains the increased willingness to pay by potential Disney customers. Whereas Netflix is nailing it at around $10, the purported price for Disney is going to be around $8/month. Yet the willingness to pay is 2X that.

Additionally, perhaps the biggest draw—Star Wars—sits in the upper-left as an add-on. This means it is something hardcore fans would pay even more for. 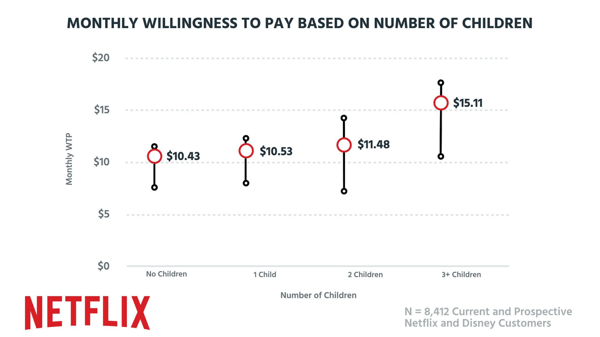 But parents with kids are much more likely to pay a lot more for access to Disney's content. 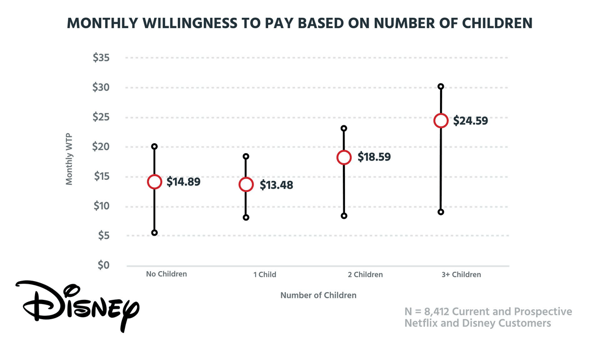 Netflix has done well with kids' shows and marketing towards families (even offering family-friendly Netflix settings to make life easier for parents), but Disney has built an empire from children's entertainment and is poised to snatch this valuable market away from Netflix entirely.

Content and the potential audience are the differentiators for these two streaming services. From a purely feature perspective, there is not a big gap between the two. 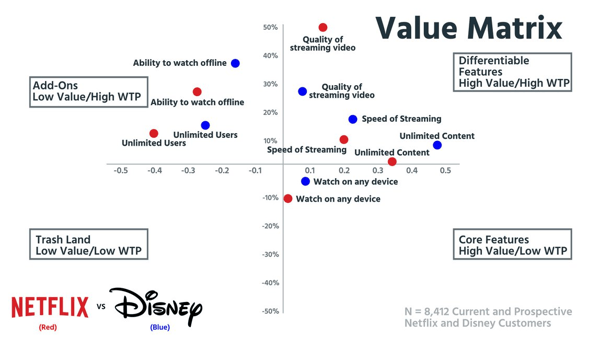 Netflix customers are slightly more concerned about streaming quality, and Disney customers want to watch offline more, but every feature is in the same quadrant. As I put it in the episode:

That will be what decides the winner.

Who's going to come out on top?

Now, Netflix knows what they're doing. Disney might be able to take advantage of what Netflix has already done by creating a copied and pasted structure and avoiding some of the pitfalls that Netflix encountered, so they may be able to get further, faster.

But don't discount Netflix. They are very good at what they do. They've already been holding off Hulu, HBO, and Amazon for years now. And according to Netflix, they aren't even worried about Disney. In a letter to investors, the company noted that they see multiplayer fighting game Fortnite as their biggest current competitor.

So consider that Disney Plus and Netflix might not butt heads as much as it seems. In fact, they might even comfortably coexist. For those who subscribe to streaming services based on content, there's a good chance they'll simply opt to subscribe to both services to get access to all the shows they want to see.

At the end of the day, that content is going to be the biggest differentiator. While Netflix might lose out a bit in the family division, as long as they keep making shows and movies that people will pay to see, they'll hold on to their content crown.

In this episode of Recur Now, Netflix could lose millions.

In this episode of Tradeoffs, Patrick and Hiten take a look at how Netflix's relentless focus on content may not help them in the future.