Today, we're exploring the pricing strategy that has propelled MailChimp to success, including an unconventional use of “unlimited” pricing, an unbundling opportunity all startups can learn from, and a few differentiation strategies for keeping its closest rivals at bay.

MailChimp is almost an anti-startup. The company is headquartered in Atlanta with no presence anywhere in Silicon Valley. To date, the team has raised exactly $0 in outside investment, instead relying on profit and patience to quietly scale the company to 700 employees, 12 million subscribers, and $400M in revenue. Unlike some of their peers, this was no overnight success: the company has been growing steadily for 17 years.

At the heart of MailChimp's success is a seriously savvy approach to pricing, but with the company in a heavily commoditized industry, their continued domination is anything but guaranteed. Today, ProfitWell CEO Patrick Campbell and General Manager Peter Zotto dig into MailChimp's unconventional use of “unlimited” pricing, offer tips to boost ARPU, and weigh the company's chances of escaping a major price war with its competitors, email marketing alternatives to MailChimp.

The power of “unlimited” pricing

From the get-go, there's a ton to like about MailChimp's pricing. The pricing page looks great, and the imagery used—the lamb, horse, and elephant—clearly mirrors the target audience for each of the three packages. New users are drawn towards the Free tier, and, clicking through, they're greeted with a simple call-to-action and encouraged to sign up and get going with the product.

Bigger companies are drawn to the Growing Business and Pro Marketer packages and a different call-to-action: instead of a one-size-fits-all price point, we're greeted by a pricing calculator, with Subscribers used as the primary value metric. It's a safe bet: most businesses will have a good handle on their total number of email subscribers, courtesy of thousands of hours spent building up their mailing list.

Next, we enter in the size of our subscriber list, and the calculator spits out a customized monthly cost.

Each pricing page lists out the package's key features, and for the vast majority of the tiers, we get unlimited emails for a fixed monthly cost. Crucially though, for mailing lists with over 50,000 subscribers, MailChimp decided to limit packages to 612,000 emails.

Lots of companies, like LinkedIn and Tinder, use “Unlimited” features as a marketing ploy, but this novel use case—flipping from unlimited to limited as pricing tiers move upmarket instead of the other way around—is a seriously smart move from MailChimp.

As we've seen before, bigger companies are better at estimating their product usage than smaller companies: with greater resources and more money at stake, they have the expertise and the incentive to understand exactly how many emails they'll need each month—and they realize that they don't need unlimited emails.

Small companies won't have this insight. As Patrick says,

“People who have a smaller list have no idea how many emails they're going to send per month.”

When it comes to choosing a tier, smaller businesses tend to rely on the “more is better” heuristic and favor the tier with the most features. This is backed up by relative preference analysis: smaller companies show a massive preference for “Unlimited Emails.”

Together, these tactics work extremely well for MailChimp:

The data shows that MailChimp is pretty much spot-on with their price points: the willingness to pay by number of subscribers lines up perfectly with each of the company's main pricing tiers.

Crucially though, that spot-on pricing might be a function of the heavily commoditized email market. With MailChimp up against strong competition from the likes of SendGrid and Constant Contact, there's little room for price flexibility. Each company is in a war of acquisition and being more expensive than your rivals isn't really an option.

MailChimp's solution is a tentative foray into feature differentiation. Both the Growing Business and Pro Marketer tiers offer an add-on feature—MailChimp Pro—for an extra $199 per month. The feature helps the company step away from the cutthroat world of commodity pricing and boosts average revenue per user (ARPU) on the back of extra features, not extra usage.

“...that Pro tier basically allows you to increase your ARPU significantly on a feature basis...and not get into the commoditized game.”

The add-on has its own beautifully designed landing page and offers extra features like Advanced Segmentation and Transactional Email. On the downside, it's hard to refer back to the original pricing page to compare plans and work out exactly what you'll get in your package.

The add-on is a good first step towards feature differentiation, but MailChimp could do more.

When we analyzed willingness to pay by company type, we found that different industries value email marketing in radically different ways.

Ecommerce has the highest willingness to pay, and that's no surprise—few industries do a better job at monetizing email, as shown by the growth of ecommerce companies that rely almost entirely on email marketing promotions and transactional email. At the other end of the scale, media companies value email the least, likely due to their ability to supplement growth with channels like organic search.

Based on the data, MailChimp—and other companies in the space—have a huge opportunity to differentiate their offerings on a vertical-by-vertical basis. Each pricing tier could be shaped to the needs of a different industry—SaaS, retail, ecommerce, and so on—allowing MailChimp to deliver more value and extract more revenue from each segment, while moving further away from the commoditization rat race. 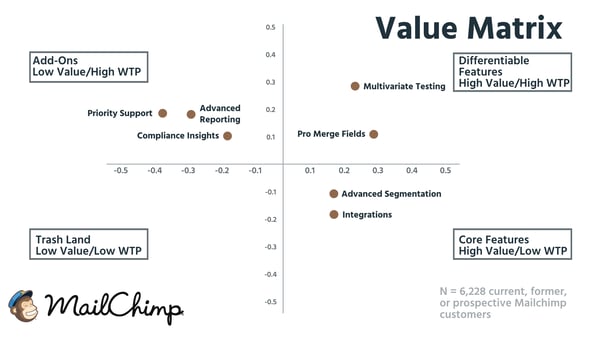 With that said, there's a missed opportunity here: many of the product's high WTP features are bundled together into the company's basic package. This was something we saw with Domo: in competitive industries, it's tempting to “oversell” your basic packages in an attempt to improve acquisition and fend off churn.

But by stripping out low value, high WTP features and offering them as separate add-ons, MailChimp could dramatically boost their ARPU. As Patrick explains,

“You can bundle a bare bones version and then charge a significant amount more to the people who really really care about them. There's 20% of the base right now...who's willing to pay more for premium support.”

MailChimp's pricing is fantastic, but the email marketing industry will only grow more cutthroat and competitive. For the company to continue on its stellar journey—and maybe even rack up another 17 years of profitable growth—they'll need to find fresh new ways to overcome commoditization and stand out from the crowd.

Tearing Down the Domo Pricing Page

With an IPO looming on the horizon, “insta-unicorn” Domo is crushing the business intelligence market. We dig into the pricing strategy that's fueled the company's colossal growth and pick out three nascent opportunities for growth.

Monday.com: Does their pricing end or drive their week?

On this episode of Pricing Page Teardown, we're talking about Monday.com, a behemoth in the project management space. But do they have what it takes to sustain their growth?

On this episode of Verticals, we explore Mailchimp's bootstrapped beginnings, its impressive growth, and secret for avoiding the spam filter.