Kanye West has it all: talent, fame, opportunities, reach, a sick sneaker line. The one thing he doesn't have? A subscription service that could offer his fans all things Kanye straight from Yeezy himself. Artists, creators, and entrepreneurs, like Mr. West, can open up their creativity and independence by relying on fans for support, not their record labels (or, more likely, their day jobs).

So, if Kanye wanted to build a subscription service for himself, how would he set his price, who would he target and what would he offer? On today's Pricing Page Teardown, we did the research to figure it out so Kanye can hit the ground running on his subscription pricing. For everyone else, this framework will offer insight as to how to set pricing for your own content package that you build from your personal brand.

Give the people what they want

Making a subscription for a person's creative output is different than offering a business service. It's not about adding a tangible number to a bottom line; it's about giving fans what they value.

And that means market research.

You need to give people what they actually want if you are going to charge for your products. Kanye puts out music you can listen to for free or low cost, videos you can watch for free and sells merch — a subscription means both repackaging current offerings and adding new benefits that fans can't get anywhere else. Otherwise, nobody will pay for something they can get already.

Maybe for you, it's not music and live feeds, but a newsletter and a podcast. Do your subscribers want to see a live Q and A, exclusive newsletter content, or something else in order to pay? If you don't figure this out, say goodbye to building a paid subscriber base.

To figure out what Kanye fans valued, we asked 11,492 of them what features they might want to see in a Yeezy subscription: 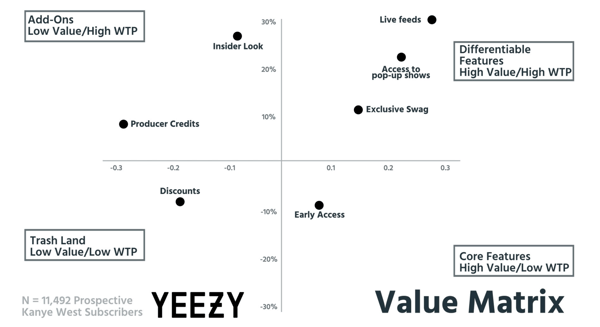 We gave them the chance to rate common features of fan clubs or artist subscriptions, like discounts and early access. The results were not necessarily obvious. For example, people didn't really care about discounts, but they cared a lot about and were willing to pay for exclusive swag, access to pop-up shows and live feeds.

For Kanye, we'd suggest starting with these elements to build a subscription. These are how he should be differentiating his service and his pricing packages, with Early Access as the core feature that everyone gets.

Another interesting element was the “Insider Look” feature, which might be an option for people to add on for an additional fee. This would capture those who had that high willingness to pay for this feature, without bloating core subscribers out of what they want for the price they want.

Willingness to pay can refine your audience

Now that Kanye's got a stack of options for his service, it's time to look at who he will be targeting. This means looking at willingness to pay (WTP), and refining what price will play well with Yeezy's core demographic.

For Ye's hypothetical subscription service, WTP stayed pretty consistent across income, which is somewhat unusual. That means this won't be a defining factor in who Kanye chooses to court with his subscription.
However, age shows a big difference. Unsurprisingly, Kanye is killing it for those in the 18-34 range, who are willing to pay more than double what the 45+ groups would. 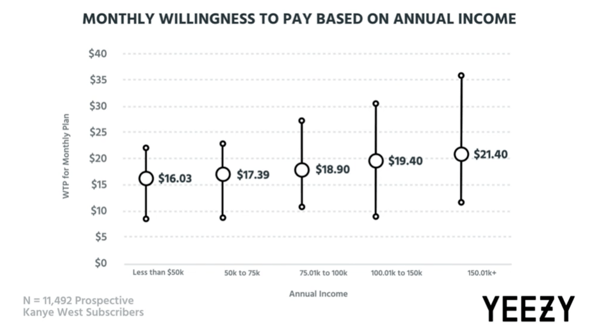 In B2B or B2C subscription services, age usually isn't a factor. But the Yeezy data shows that there is always a way to slice WTP data to find the right customer. For you, it could be industry, job title, or something else relevant to your offerings. For Ye, it is those younger demographics that are willing to pay. 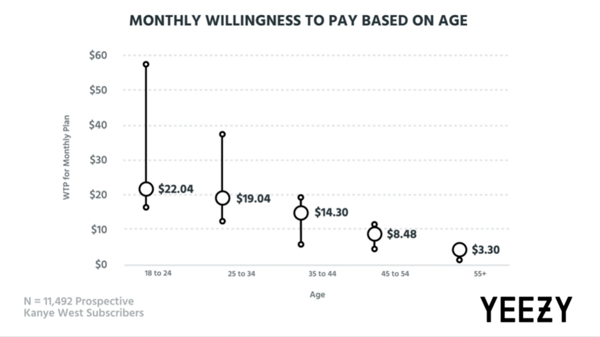 Going a little further into our demographics, we looked at who was willing to pay based on our Kanye Index, a proxy for measuring how interested someone is in Kanye West. Superfans — people who have all his music and have attended shows— are far more willing to pay than people who knew Kanye but had only purchased one album. 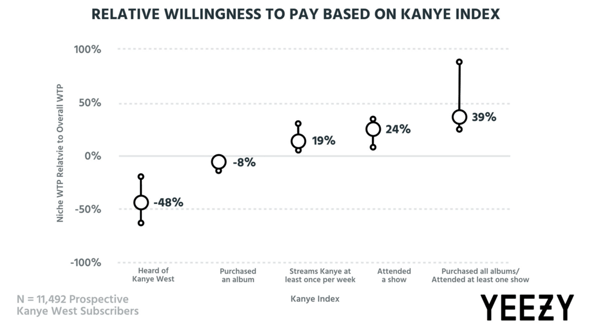 This is key because it helps narrow down the people who are most likely to pay — and keep paying — for a subscription. For Mr. West, this is going to be, roughly, 18-34-year-olds from all income brackets who fall into the “Superfan” category. This is information that will help Kanye tailor messaging, advertising, and pricing for his subscription.

Bottom line: If you don't have data on who you are building your subscription for and what they're willing to pay, it will fail — that's subscription basics. To market your subscription effectively, you'll need to know not just what people want, but who those people are. Yeezy superfans will catch references you won't. Twenty-year-olds are on different platforms than 35-year-olds. Whatever your core demographic is, you have to cater to them.

With a fanbase like Kanye's, there's no reason not to

Kanye West needs capital to do all of the things he wants to do and if you have independent projects on your radar, you probably do as well.

For Kanye, there's no reason not to turn to his fans for money to fund his ventures. He has all the ingredients for success, and the independence could spark a new era in Kanye's creativity. West notoriously does not want to be constrained and building a subscription service to cover some of his bottom line would give him more freedom.

If you have worked to build up a base of viewers, readers, etc., you should consider how they can pay into your projects. For individuals, options for funding are limited. You can self-fund and grind at a day job, borrow money in a small business loan or similar, or try to hustle for small payouts from niche advertising. The subscription model is truly one of the best revenue models for sustaining income to support your work.

If you want to try something new, or invest more time in your side hustle, or launch your career as an entrepreneur today, consider adding a subscription model to your offerings. Whether you're building that yourself on your website, or going through a service that helps you set it up like Patreon, thinking tactically about your subscribers and cost will ensure you are getting the most out of your efforts.

Kanye, if you're reading this, hit me up. We can get your subscription pricing on point in no time.

And for any other creatives or business people out there, take the advice in this episode to heart. Don't be afraid to ask your subscribers to pay for content that adds value to their enjoyment of your projects, no matter what form that takes.

We see you Friday - and we’re raising you a Kanye West subscription, an affiliate marketing amp up, and a PB & J sandwich.

In this week's episode, Patrick and Peter look at what would happen if Gary Vaynerchuck started offering a subscription product of his own.

Kanye's Love for Kanye Proves the Power of Personal Brand

In this episode of Tradeoffs, Patrick and Hiten talk through Kanye West's personal brand and how he uses creativity and controversy to stay relevant.