You've just built the most earth-shattering product ever invented. But you're not too sure how to sell it. Without the right revenue model, how are you going to survive long enough to find success?

Then you get some friendly advice from a local mentor who says, "maybe you should try freemium? That seems to work."

Stop the presses. Stop everything.

Freemium is an acquisition model, not a revenue model. You should think about your freemium plan more like a really freemium ebook, rather than your path to billions.

Yet, you can find success with freemium by using the model like a scalpel, instead of a sledgehammer. To test this theory, we dove into the history and MRR numbers of two successful B2B and two B2C SaaS companies that rely on subscriptions and freemium. What we found are six lessons that every company can put into use.

Table of Contents
1. Why is the Subscription Model + Freemium So Strong?
2. Finding Success with Subscription SaaS
3. Locking Down the Model
4. Putting it Into Practice

Why is the Subscription Model + Freemium So Strong?

Selling software used to be like selling cars. You got a lot of money up front, but every month your business went from hero to zero because you didn't have recurring revenue until much later when customers came back on an upgrade cycle. This is especially problematic in the early days of a company where staying afloat long enough to find success is critical.

Today, companies like Adobe can charge a customer $10 per month for Photoshop, which means that far more people can afford to use it than when it cost $700 for a boxed copy. Software is now accessible to a much wider audience than it ever has been. Combine that wider base of potential customers with monthly recurring revenue, and you get a predictable model for revenue over time that you can't get with an up-front model.

Freemium just takes this finding to the logical conclusion by opening up the denominator of your addressable market through eliminating the price question entirely. Users can then get a taste for your product, see the value, and then realize they should be paying for it (by forcing them into a purchasing decision of some sort).

That's not to say that the combination of freemium and the subscription model is an easy road to success, only that it is (in some ways) easier than the alternatives. For example, because there are not large sums of up-front money coming from customers, subscription models often require significant investment money to stay afloat until they reach critical mass.

If you haven't built something that people want, then you're set on a path to failure. This is true no matter how good your pricing is, or how easy it is for someone to use your product. This is the challenge of finding a product-market fit (or Brian Balfour's more nuanced market-product fit)

Two of the biggest names that you'll hear when it comes to B2B product-market fit are Slack and Trello, both of which have massive bases of users. That said, there was no such thing as an overnight success. Their companies have taken years of testing and iteration to get where they are today.

In a 2010 blog post, famed investor Marc Andreessen lays out what he believes to be four myths surrounding product-market fit:

Marc goes further to explain how the different levels of MRR correspond to product-market fit. He argues that the market determines the direction of the product and that many founders are fooled into believing that they've accomplished product-market fit way before they actually have.

To reach the pinnacle of SaaS success, you can't stop thinking about or striving towards product-market fit, especially as markets change and expand.

Slack finds growth from the bottom up

Slack began in 2007 as Tiny Speck, a gaming company that never found success. The idea of Slack as a product didn't come around until 2012. Prior to that, it was a tool that the team was using internally to optimize communication between its developers.

In an interview with First Round, Slack CEO Steward Butterfield details the early days of Slack development. He discusses how the team begged their friends at other companies to use the product and give them feedback. What Slack found was that different team sizes had wildly different needs, and the risk of rejection was high because of all of the people involved in accepting the product.

The team went to work, producing collateral that would help explain Slack's value proposition, and educating its potential users about the problems that it solved. The team spent six months in a private beta, plowing through more than 15,000 signups and teaching them how to use the product. In February of 2015, Slack finally opened to the public.

Trello finds the power of free

Trello has a similar story of success with a freemium business model. The company has over 1.1 million daily active users and reached $10M in ARR ($833k MRR) less than a year after launching its enterprise tier of service. As of May 2016, the company had over 14 million signups and was adding 150,000 users each week.

In its early days, as a subsidiary of Fog Creek Software, Trello held the enviable position of being able to focus solely on growth rather than revenue. In 2012, CEO Joel Spolsky summed up the company's thought process well:

There are three points that we can take away from the stories told by Trello and Slack:

Freemium works, if you can afford it

Get someone addicted to your product for free. When they grow and need more features, you will be in a much better position to convince them to pay for it. But first, you have to be able to survive the free period.

Early failures from Tiny Speck led to eventual success with Slack. Trello didn't have a paid product until three years after its launch. These were trying times for both companies, but their desire for success outweighed the negatives.

Trello and Slack are two products that are meant for teams, but have features that are valuable for an individual. By focusing on getting single people into the door and turning them into advocates, the companies opened the door for viral growth.

Locking Down the Model

It might seem backward, but it's not uncommon for SaaS companies to change their pricing long after they've found product-market fit. These changes can be necessary in order for the company to compete, grow, or survive. Finding the right pricing points is critical, but there is significant room for experimentation. Both Dropbox and Automattic are prime B2C examples of the benefits of experimentation.

Dropbox iterates its way to success

Some of the most interesting pricing models come from companies that cross the line between B2B and B2C. For instance, let's look at Dropbox. The company launched as a freemium, B2C product, reaching critical mass sometime in 2010. But Dropbox hasn't shied away from pricing changes as the market demanded them. It launched its first B2B product in 2011, revamped it and changed pricing in 2013, then did so again in 2015. Along the way, it also lowered pricing and increased storage on the Pro version of its B2C offering.

It's worth noting that there are no one-time charges with Dropbox. The company does recognize how crucial annual plans can be, so they offer discounts when you sign up for one, but every charge is set on recurring subscriptions to keep the MRR numbers in line.

Another particularly interesting case is that of Automattic, the parent company of WordPress. Though WordPress is available for free, as open-source software, Automattic has no fewer than 11 different revenue streams that are directly tied to the product.

Automattic does take a different approach to its MRR numbers, combining both subscription fees and one-time purchases in their various revenue sources. For example, the company offers VIP hosting that starts at $15,000 per month, but it also offers WordPress themes that can be purchased for a flat fee, with a commission on the sale going back to Automattic. The company also offers consulting-style services, such as a "Guided Transfer" to move your WordPress.com blog over to a WordPress.org installation on your own domain.

There are three more lessons that can be learned from Dropbox and Automattic:

Sometimes the market demands a pricing or offering change. Sometimes it's just a way for a company to capitalize on interest in their product. Don't be afraid to experiment with different pricing structures, as long as the market tells you that it will sustain them.

Automattic has put itself into a position where it can weather storms. If WordPress.com signups trend downward for a period of time, their other methods of one-time and recurring revenue can readily keep them afloat. Look for ways that you can offer premium or value-added services to customers, but be wary of making your customers feel like they have been “nickel and dimed”.

For many B2C companies, finding a way to cross over into the B2B world allows them to have larger, sustainable MRR numbers. B2B customers are well-positioned and unafraid to invest their money into workplace solutions that are integrated and essential to the company workflow. This can be a windfall for the B2C business looking to expand their MRR.

Putting it Into Practice

Early testing, frequent iteration, and the courage to try something new are keys to SaaS success. You have to be willing to challenge what you think you know, and you need to have the right metrics in place to make data-driven decisions. Experiment, test, and diversify. It's a different mantra than “move fast and break things”, but it's one that has proven to be a path to success for some of the biggest names in SaaS. 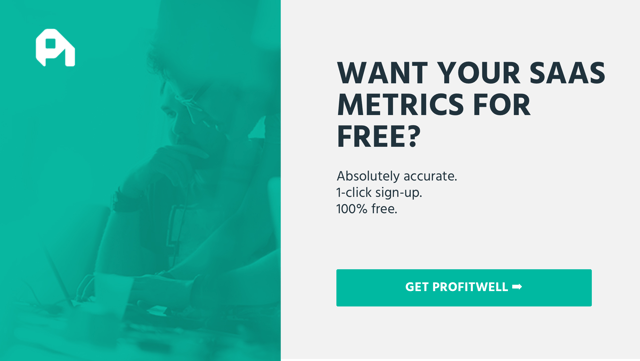 We collected data from just over twelve hundred companies to provide SaaS benchmarks on singular vs. multi-focus companies growth rates.

We collected data from two thousand companies to provide data on how NPS impacts retention.