Today, Peter and I are talking about two competitors in the men's cosmetic and sexual health market, hims and Roman. Both companies are doing a lot to make men feel more comfortable about addressing problems like hair loss and erectile dysfunction, but their pricing leaves a lot to be desired.

We take a look at the willingness to pay for different types of products as well as how that willingness to pay changes depending on customer age. Both platforms have a big opportunity to optimize their pricing based on the value each product provides to their target customers.

How much do hims and Roman cost?

Both hims and Roman offer per-dose pricing for hair loss and erectile dysfunction medication, but they use subscriptions as a part of their pricing strategy as well. Hims subscription options start at around $20 a month, while Roman uses an entry point of $17 a month.

Hims and Roman use branding and page design very differently. Where hims goes for a modern, Silicon Valley feeling, Roman takes a consultative and medical-focused approach. Each does a great job of presenting their products in a way that feels authentic, but Roman still comes out on top.

Take the home page for both companies. Roman focuses on the fact that their service is convenient, helping customers get their prescription medication delivered instead of having to go out to the pharmacy.

And employs social proof through customer testimonials to boost their legitimacy. They also call out popular news outlets that have covered their products.

Hims' homepage, while also featuring the products they sell, goes for a more conversational tone. They're funny and don't take their brand too seriously, which is in direct contrast to Roman.

And they use plants as representational stand-ins for the difficult topics of hair loss and erectile dysfunction.

This is a great tactic for building a fun and engaging brand, but might end up hurting hims in the long run if the stigmas around talking about hair loss and erectile dysfunction don't go away. Potential customers might think hims is making light of a topic that makes most people uncomfortable or embarrassed.

Hims also doesn't have a dedicated pricing page like Roman. They opt for an e-commerce model and have separate product pages:

This doesn't give nearly enough information in my opinion and can't compete with Roman's page design, which breaks down the per unit pricing of every one of their medications:

When we surveyed 1,842 target customers of these companies and created a value matrix based on their responses, we found that Roman's design decisions are definitely the right way to go: 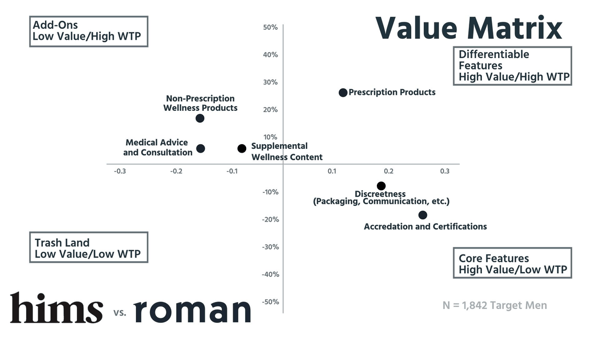 Accreditation and Certifications as well as Discreetness (Packaging, Communication, etc.) are the two Core Features based on this research. While we can assume that both companies send their packages discreetly, hims' jocular branding goes against this idea. Roman keeps everything clean and professional, and features their accreditations more visibly.

Roman also speaks to Medical Advice and Consultation on their website, which puts them in a better position to leverage that as a potential Add-On opportunity. Both hims and Roman are in a good position to get some expansion revenue from Non-Prescription Wellness Products and Supplemental Wellness Content.

Overall, it looks like Roman's branding helps them align better with current customer expectations around discreetness and professionalism. That's not to say that hims is in a bad situation right now, but their branding relies on open and honest communication of these issues, and we're not quite there yet.

Both companies should focus on a value-based pricing model

“In both cases, these companies are probably deploying a cost-plus pricing schema, where they basically look at the cost of prescriptions instead of taking a more value-based approach. That's the #1 problem with both of these companies.”

Prescription companies typically rely on a cost-plus pricing strategy, relying on a per unit markup to determine their selling price. While both hims and Roman come from that tradition, they need to start moving away from that model. Using value-based pricing will help them capitalize on their customer's willingness to pay.

Understanding their value metrics would help hims and Roman recognize where the opportunities are for higher prices. Right now, they're both selling products for less than is optimal based on the willingness to pay data we found.

Just look at this breakdown of monthly willingness to pay based on need.

For Hair Loss/Care and ED/Premature Ejaculation, both hims and Roman come in at the very low end of the ranges. Roman's $17 entry point and hims' $30 hair care bundle don't even come close to the $41.49 average. They could easily raise prices for these products without hurting relationships with the customer.

ED/Premature Ejaculation is definitely where the most opportunity is. There is a big range for those products due to existing brand names like Viagra or Cialis driving up the price, but both hims and Romans are underpricing their products as well.

We can assume that these ranges are connected to the willingness to pay based on customer age as well: 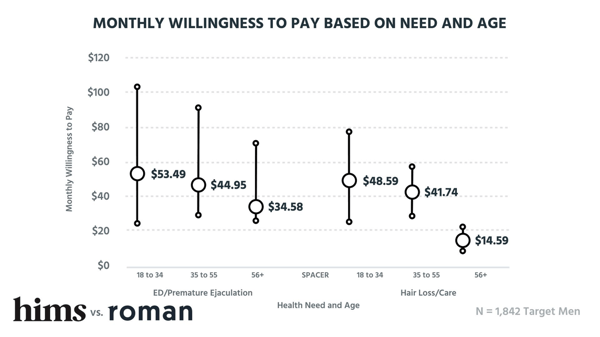 As you can see, it varies significantly as the customer gets older. We thought that willingness to pay for ED/Premature Ejaculation medication would increase alongside customer age, but in reality, men who are considered to be in their “sexual prime” actually come in at $53.49. That's almost a full $20 over the $34.58 average for men who are 56+.

You see a similar pattern for Hair Loss/Care, with men in the 18 to 34 range having the highest willingness to pay. If hims and Roman understand this, they can start to build out more targeted buyer personas, and leverage the buying power of these younger segments of the market.

“When you think about it, younger people are paying for the idea of vanity — looking good helps them build confidence, so it's not super surprising to see these ranges.” Peter Zotto, General Manager

While we love hims' branding, it doesn't help them differentiate themselves in a market with such high value on discretion. Romans medical positioning puts them in a much better place to grow based on current perceptions of the industry.

That's why both Peter and I would be customers and investors of Roman over hims. The trust they build through their design and pricing decisions is appealing to us as potential customers, and it signals an understanding of the market at a high level.

That said, there's definitely a lot of work for both of these companies to do to increase their prices and simplify their packaging. Right now, it feels like each individual product is disconnected from a larger, more cohesive pricing strategy.

In this week's episode, Patrick and Peter tear down the pricing pages and strategies of Bloomberg and The Wall Street Journal.