This episode is going to be a little different. Instead of tearing down the pricing strategy of another popular SaaS business, we're looking at an influential player in the marketing and branding space, the one and only Gary Vaynerchuk. While Gary doesn't have a subscription offering at the moment, we've put together some data that speaks to his ability to monetize the existing relationships with his followers.

Much like our look at Kanye West, this episode is all about how the subscription model helps brands (or people) turn relationships into a predictable revenue stream. Peter and I talk about the importance of fostering these engaged relationships with followers and how those relationships are at the core of building a successful and sustainable business.

Who is Gary Vaynerchuk?

One of the leading voices in the hustle economy, Gary Vaynerchuk is an entrepreneur and branding consultant with a big dream — he wants to own the New York Jets. And while he sometimes veers into sounding like a charlatan, Gary's authentic voice is one of the driving forces behind his success. 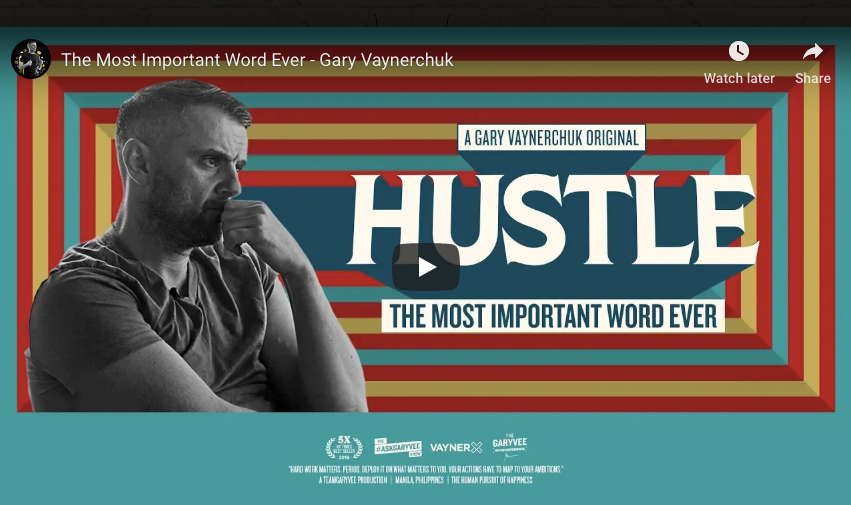 He is an outspoken and staunch advocate for the power of hard work and taking ownership of your success. Starting out as one of the first YouTubers, Gary has grown his personal brand into a powerhouse company, VaynerMedia, and solidified a place as a formidable presence in the marketing community.

The subscription model is one way Gary could monetize his fanbase

“The data tells us that Gary can monetize for at least some of his access. That doesn't mean that he should stop giving away the free access he already provides, but there is something here that he can offer.”

Without an actual pricing page to dig into, we decided to look at what would happen if Gary decided to offer his fanbase a subscription product. He has a huge following on social media and already offers a lot of content for free via his VIP groups and text communication, but we wanted to see what his fans were actually willing to pay for.

To do that, we put together a value matrix based on responses from 3,113 current fans. 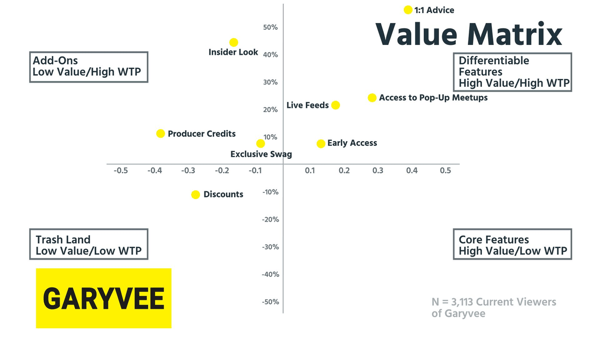 The types of features that Gary would be able to charge a subscription price for.

This matrix shows what Gary's fans are actually interested in, and it all comes down to access, whether that's Early Access to something he's created, Access to Pop-Up Meetups, or Live Feeds of his content. Everything in the Differentiable Features quadrant is built around the idea of getting closer to Gary's insight and information.

We actually see the highest willingness to pay (WTP) value ratios ever in this matrix. The chance to get time with Gary for 1:1 Advice is valued so far above everything else that even Peter almost missed it. Gary's fans are willing to pay more than a 50% premium for this level of access. While that isn't scalable for him or any business owner, it proves that access could very well be Gary's subscription value metric.

The idea of access shifts a bit in the Add-Ons quadrant but continues to show us how invested Gary's fans are in the content he creates. Providing behind-the-scenes content would satisfy those people who are willing to pay for an Insider Look, and offering Producer Credits is a great opportunity for expansion revenue. Both of these features speak to his fans' interest in what Gary makes and how he makes it.

If he wanted to, Gary could start monetizing the content he already creates by letting his fans in on his thought process even earlier.

“You should never average out your price. Gary could easily get $12, up to $15, a month by going after the people who truly care about his product and his brand.”

So what type of entrepreneur makes up the target buyer persona for a Gary Vaynerchuk subscription? 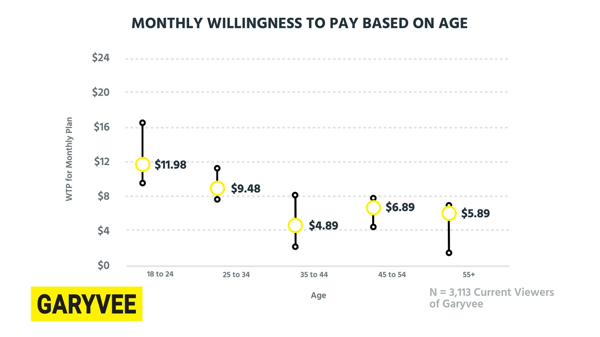 Monthly willingness to pay for a Gary Vaynerchuk subscription based on age.

The 18-to-24 segment is where Gary has the biggest opportunity. They're willing to pay the most at an average of $11.98 per month. With the 25-to-34 segment slightly below that at $9.48, you might think the most logical monthly price would be around $10. But that would be too low based on this data.

If I were in Gary's position, I'd go higher than the average in the 18-to-24 range, pricing his subscription product at between $12 and $15. Focusing on the upper ranges for willingness to pay gives him a way to derive as much value as possible from the relationships with these customers. It also helps the subscription feel more “premium” to potential customers.

To build on this baseline, I created a Gary Vee, or GV Index. This scores a person based on their tendency to view Gary positively or negatively. Someone with a high GV Index score is one of Gary's hardcore fans, the type of person who consumes all of his content and has fully bought into his message. A lower GV Index score doesn't necessarily mean they dislike Gary; these people still listen to his message, but they also get insights from other entrepreneurs. 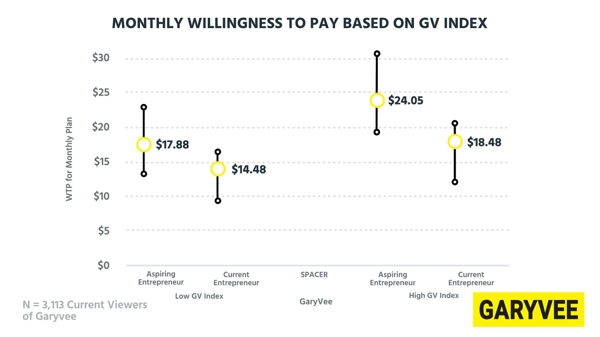 Monthly willingness to pay for a Gary Vaynerchuk subscription based on the GV Index.

Based on this data, even someone who is lower on the GV Index still has an increased willingness to pay over the general population. Someone with a high GV Index score, however, is where Gary should focus his efforts. Both Aspiring and Current Entrepreneurs with high scores have a significantly higher willingness to pay.

What's interesting is to see how much more Aspiring Entrepreneurs are willing to pay than someone who is currently running their own business.

We can tie this back to Gary's overall message, which resonates more with people who are just at the beginning of the entrepreneurial journey. His recommendations are targeted at the people who don't yet have a handle on how to run their business, which is why more seasoned entrepreneurs aren't as willing to pay. They've already gone through the process of figuring out their branding, their message, and their work ethic.

By targeting aspiring entrepreneurs with a subscription offering, Gary can leverage their higher willingness to pay and start building relationships with business owners at the very start of their careers. All of this works together to bring Gary towards his end goal of owning the NY Jets.

“The beauty of the subscription model is that, for the first time in history, we are putting the customer relationships directly into how you make money.”

Gary Vaynerchuk's hypothetical subscription business is a great example of monetizing the customer relationship and offers a few takeaways for anyone trying to get their own subscription started.

In this episode of Recur Now, we provide proof that the subscription takeover is here.