It’s the year 1990. Picture a young David Cancel (CEO/Founder of Drift) in Queens, New York. LL Cool J is blasting, and the smell of spray paint is strong. David is working in a cash-and-carry warehouse in Woodside, selling wholesale goods to other businesses.

This was the beginning of it all for David—learning how to remove friction from the buying experience. As a guest speaker at Recur 2019, David shared his thought process behind founding Drift, and how removing friction has been the center of it all.

While working for a wholesale company, David said he went into Manhattan rather frequently to visit other wholesale stores and try to buy merchandise. He said it felt like approaching a speakeasy. There were signs on the door that read, “Wholesale only: business ID needed.” This is when he began noticing all the friction in the buying experience. Some 20 years ago, friction was normal, but not anymore—and according to David, it’s all thanks to the internet.

Living in a frictionless economy

Drift is the world’s leading conversational marketing platform. David said his team believes we are currently living in a frictionless economy—in fact, people have grown to expect a frictionless buying experience. However, David said the one industry he believes that has yet to remove friction is sales and marketing, which brings us to David’s framework: The Hypergrowth Curve.

“This is the thing the internet has enabled more than anything else. It is removing friction from a process.” 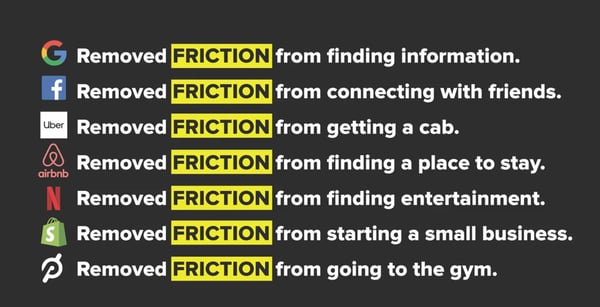 The Hypergrowth Curve describes how industries go through different phases. In SaaS, we are now in the third phase.

During this stage you wonder if discovery and invention is even possible. You’re figuring out technology.

This stage is centered on mass production, building factories, and if it all scales. According to David, it’s not about technical discovery, but rather who can build the best factory. The Model T Stage all comes down to unit economics and your business.

The final phase is differentiation and brand building. You’re asking questions such as, “why is a customer going to buy from me?’’ or “how is our customer experience a step above everyone?” David says that in this stage, you can’t hide behind trade secrets.

Let’s break down the five examples of enterprise software companies that are using AI to remove friction for customers.

It says it right in the company’s mission—make video communication frictionless. David said removing friction comes back to AI. Head of product, Oded Gal, said “Our mission at Zoom is to give people the ability to accomplish more. That is why we are leveraging things like AI and machine learning to remove friction from the user experience and deliver a richer communications experience.”

Voicea is a tool to maximize and activate meetings. The company’s mission is to remove friction to get work done faster. Voicea leverages AI during meetings—transcribing and highlighting to ensure conversations turn into actions quickly and efficiently.

Celonis harnesses the power of Process Mining to help organizations remove operational friction. How is that friction removed? Artificial intelligence, of course.

Persado removes friction through AI by using it to send tailored copy to consumers based on the kinds of messaging they’ve reacted to or shown a preference for in the past. One of its customers, Chase, said ads created by Persado’s machine learning, performed better than ads written by humans, with a higher percentage of consumers clicking on them (more than twice as much in some cases).

David finished off the set of examples with Drift—with the mission of helping you use conversations to make business buying frictionless, more enjoyable, and more human.

When thinking about the buyer experience, you must consider what’s ideal. Sending out forms used to be the norm, but now they’re not the most frictionless. David says you can always segment live chat, but it's difficult to scale. Having a human-operated live chat means people can’t respond in less than 2 seconds, people aren’t available 24/7, people don’t provide a consistent experience, and people take a lot of work (hiring and training).

To solve this, Drift leverages a hard coded bot, focused on sales qualification in B2B.

The major takeaway here is friction and how you can continually work to remove friction for your customers. As technology continues to advance, leveraging artificial intelligence seems to be the most natural progression in removing friction. As David said, you need to have a strong understanding of what stage your company is at. Without this understanding, you won't be able to scale your business in a frictionless manner.

CS 20/20: How to Push the Boundaries of Customer Success with Product-led Retention

You can still win in business by being human-first. Gainsight's Nick Mehta and Kate Peter break down how.

Companies are moving faster and faster, making it harder to connect with customers. Michelle Huff, CMO of UserTesting, has a few ideas on how to fix the empathy gap in SaaS.

How to build cancellation & exit surveys that reduce churn

Learn how to make the most of cancellations to reduce churn, from how to think about your exit surveys to getting a better pulse on your customer base.