Okay, not really, but we do make a solid case on why you should switch to the freemium model.

Table of Contents:
1. Freemium is your friend
2. Join my freemium fanbase
3. Zoom to be even more accessible
4. Twitter and subscriptions—it's happening

Freemium is your friend

The core difference between freemium and free trials is time. When you’re trying to convert a prospect to a customer, you have a few different options to convert them. You can force them to sign up and pay before they use the product, you can give them a free trial so they can try before they buy, or you can give them a freemium plan where they can get a taste for the product and use it until they’re ready to buy.

Now opponents of freemium may say that you’re better off getting money sooner than later, but in the world of thousands of products and users having less and less time, you want the onus of conversion to be on them, rather than your arbitrary timeline.

Put another way—that user may be nurtured and convert in six months vs. you forcing them into a relationship they aren’t ready to start and you losing them forever.

With freemium, users become advocates of your brand, even before they’re buying, and the data supports these users converting from freemium to be better customers in the long run.

Let's look at the data.

First up, let’s talk about retention being better for freemium customers. 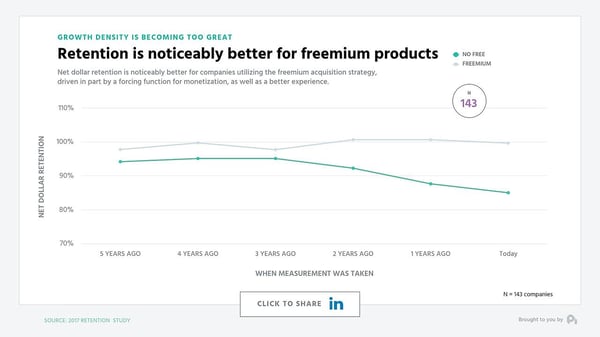 NPS, or net promoter score, which is a measure of customer satisfaction, is also greater with those customers who converted to paying from freemium. These customers tend to have double the NPS scores of those individuals who convert from a traditional sales conversation that doesn’t include a freemium plan.

And we know happy customers means customers for life. 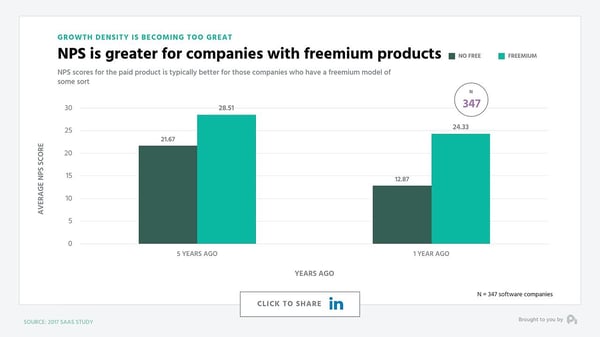 Freemium doesn't take away from value

And last up on the data front, let’s talk about freemium eroding the value of your paid products.

We used to think that if you have something for free, then the paid product can’t be that expensive, because it’s tough pushing someone to pay for something, if they’re currently paying you nothing. Well, in recent years we’ve found this zero dollar anchoring behavior to be less of an issue. For instance, five years ago the willingness to pay from an anchored free plan was only $150. The willingness to pay is now $1,000.

To put it simply, freemium isn’t holding you back. 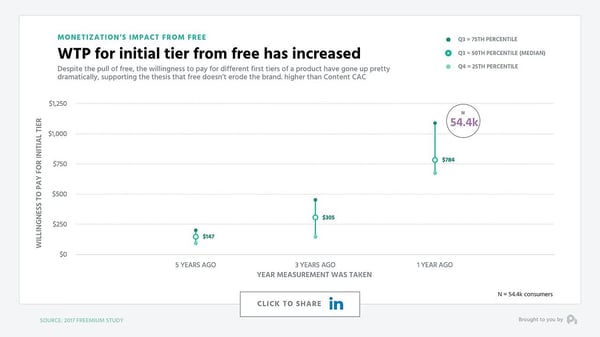 Freemium is your friend. Why? Because freemium can up your net retention, increase your users’ satisfaction, and drive a higher willingness to pay.

Although freemium is still a very individualized decision and shouldn't be taken lightly, it’s ultimately about letting your user experience your brand, your product, and your ethos on their terms, instead of forcing the ultimatum.

We have an entire ebook dedicated to freemium. The Freemium Manifesto uncovers how to make freemium work for your SaaS business. Get it.↓

You can also share the data with friends and fellow industry players that could use it right now. Send me their email address to grace.g@profitwell.comand I’ll get their name on the list. Or they can subscribe directly at index.profitwell.com.

Zoom to be even more accessible

According to the company website, the plans for Zoom Phone are priced between $5.99 and $60 per month, depending on the device users opt for. The cost for hardware services for Zoom Rooms is between $75 to $200 per month.

Twitter is jumping on the subscription bandwagon. Their shares jumped more than 8% on Wednesday morning after Twitter posted a job listing indicating that it’s working on a potential subscription platform codenamed “Gryphon.”

Though they did not reveal much, they did mention that Gryphon is a team of web engineers that will work closely with its Payments and Twitter.com teams.

Building a subscription platform is a first for Twitter, but subscriptions could provide a new way to increase engagement and loyalty, as well as widen its revenue.

We’ll keep you posted as we learn more details on what this could mean for SaaS businesses everywhere.

On the hunt for a new job? Check out today’s featured user—Kick Resume.

Kick Resume helps you build a standout resume, cover letter, and personal website in minutes. The premium version is only eight bucks a month, giving you access to 30+ resume templates, 20+ cover letters, and a lot more.

Is not getting enough sleep hurting your company's growth? Today on Recur Now, we'll let the data do the [pillow] talking.

What's the Point of a Leaky Bucket?

Today on Recur Now, we're looking at the 3 hidden areas of churn you might be missing—and how to fix them.

Let Your Product Do The Talkin'

Today on Recur Now, we're all about product-led growth and how you can make it work for your business. We've also got the latest numbers from our B2B SaaS index plus top SaaS news.

Today on Recur Now, the key to a successful subscription relationship is commitment. How do you build commitment in SaaS? Annual contracts.