In this week's edition of Pricing Page Teardown, we compare subscription services from two news sources on opposite sides of the political aisle: Fox News and MSNBC.

Fox News recently launched a subscription-based streaming service called Fox Nation, which looks and acts like a Netflix for the Fox News audience. MSNBC does not currently have a parallel service, but they do have the same type of content and could hypothetically roll out a similar service for their more liberal audience.

To get a better picture of how well Fox Nation monetizes their relationship with their viewers through this service and to explore the potential for MSNBC to do the same, we surveyed over 5,500 current viewers of Fox News and MSNBC on how much they were willing to pay for such a service.

Our first impression of the Fox Nation pricing page was that it's a lot cleaner and better organized than the MSNBC home page. The website as a whole is very intuitive and even looks similar to Netflix's, which a lot of people know how to navigate. The MSNBC page, by comparison, is crowded and lacks the same level of gravitas.

However, the Fox Nation pricing page could benefit from a few minor changes. The two payment options provided are a monthly plan of $5.99 or a yearly plan, which is $64.99. Without a deeper dive into the data, I can't argue with either. However, without context, it's difficult to know how much of a discount the yearly plan offers from the monthly plan.

"Without context, it's difficult to know how much of a discount the yearly plan offers from the monthly plan. So, my initial recommendation for the Fox Nation pricing page is to include a description in the yearly plan saying something along the lines of “get X months free” or “save X dollars per month."

To get a better idea of Fox Nation's pricing strengths and weaknesses, as well as MSNBC's opportunity to roll out a similar service, we conducted a survey to look at how viewers' willingness to pay for a streaming service from either outlet fluctuates based on party affiliation and location.

What we found was that Republican audiences (who make up the Fox Nation user base) are willing to pay more than Democrats. To make sure the difference in willingness to pay wasn't actually due to regional differences, we also pulled results by location.

Across the board, regardless of location, Republicans are more likely to pay a high price to access a streaming service from their preferred news source than Democrats are. When you consider how the two groups consume news and media, this makes sense.

Democrats tend to get their news from multiple channels and sources. Because they are not so reliant on MSNBC as their sole trusted news source, it makes sense that they wouldn't want to pay much for it.

Republicans, by comparison, are more likely to focus on a single trusted source for their news. Popular news sources are often thought to be left-leaning, leaving Republicans feeling somewhat alienated from much of the mainstream media. Therefore, when they find a news source that aligns with their views, they are more likely to stick with it and invest time and money into engaging with it.

This leads us to our next question: Is Fox Nation taking full advantage of their viewers' single source loyalty, or is there room to charge more without losing customers? Fox Nation's current pricing of $5.99 a month is a safe play, but given that both rural and metro Republicans are willing to go up to the $7, $8, and $9 ranges, Fox Nation could likely adjust pricing to $7.99 or even $8.99 and still retain both their rural and metro audiences.

MSNBC has an opportunity to update their pricing model

Even though Democrats are not willing to pay much for a service like Fox Nation, we still believe there is an opportunity for MSNBC to roll out a similar product if they target the right segment of their viewer base with the right type of content. 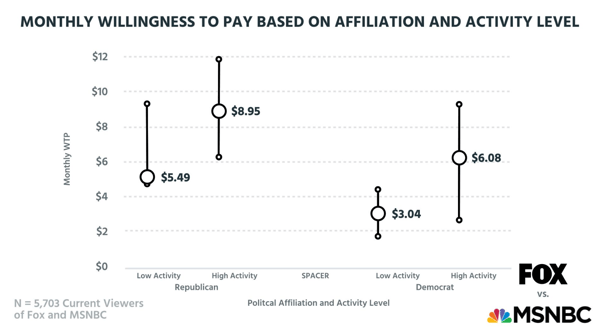 In this graph, you can see that, like before, Democrats have a much lower willingness to pay than Republicans. However, there is also a wide spread among high-activity Democrats and a willingness to go up to the $7-$8 range. This opens up an opportunity for MSNBC to create content specifically for that segment of their viewer base.

Offering content that helps viewers be more active and connect more easily with their community activism efforts, for example, could be a great way for MSNBC to get these people into a paying subscription.

Both platforms should capitalize on these features in the pricing strategy

Given the differences in the two viewer bases, it would be reasonable to assume the streaming services from Fox Nation and MSNBC would need to offer different features, different types of content, and different content formats. We tested out this assumption by plotting how each user base values certain features and content types.

As expected, the two value different features and, as a result, the type of content that MSNBC includes in their service would need to be quite different than the content and features Fox Nation offers.

For the Democratic MSNBC viewer base, the top priority is getting access to exclusive opinion and commentary shows. If MSNBC rolled out a subscription streaming service, this type of content would need to be used as one of the main selling points for prospective customers.

For example, not a lot of the Fox News audience necessarily cares about having access to exclusive investigative reports, but those who do are willing to pay a high price for it. Making this type of content a separate cost could help Fox Nation reach more viewers who don't want to pay for the full service but still want to see those reports.

MSNBC could do the same with exclusive documentaries. As the matrix shows, Democratic respondents are willing to pay a lot more for this type of content than Republicans, and it would make a great add-on feature for MSNBC.