Today, we look at the "how to" of setting up—and learning from—experiments. Plus, an investor and founder reveals what she looks for when considering her investments. And finally, the second annual Enterprise Tech 30 list has been released. (And we do some recognizing ourselves.)

Let them all experiment

While A/B testing on large transaction volumes is common practice at already impressive orgs like Google, Booking.com, and Netflix, Thomke says even small firms can get a competitive advantage from experiments.

In a podcast dropped by the Harvard Business Review, Stefan explains how to introduce, run, and learn from experiments, and how to actually build a culture of experimentation in your organization.

Why’s that important, though? Because when you give the employee the authority to experiment, the results can be groundbreaking. Here's a segment with host Curt Nickisch:

Curt Nickisch: Just to start, pretend I’m a business leader. Make the case for me. Why do we need to experiment more in business?

Stefan Thomke: Well first of all, it can generate a tremendous amount of value. Let me give you an example: Microsoft’s Bing, which is a search engine. An employee working sort of at Bing, came up with an idea on how to sort of display its ads. The manager didn’t think much of it. And they kind of shelved it. But the employee insisted.

At some point the employee decided just to launch an experiment to run a test, a controlled test. And when he ran the test, that little change, a few days of work generated more than $100 million of additional revenue in that year alone. And of course, more revenue going forward. It was in fact, it was the most successful experiment that was run at Bing.

So, what made the difference? Well the difference was that the employee had the power essentially or the authority to run the experiment, to launch it and to test it. It’s the test that actually told you what works and doesn’t work...

And not the manager. The problem is in a lot of innovation, especially sort of when you’re trying to predict customer behavior, we get it wrong most of the time. And so rather than trying to follow our intuition or our opinions, why not just run the test and let the test tell us what works and doesn’t work.

So, why aren’t people doing this already, you ask?

Stefan says there are a lot of reasons—from conducting too-simple experiments to lack of tools. He goes into this in the podcast.

He also delves into the ways in which you can start fostering experimentation in your own org. And if that’s the difference between creating something that works (to fix something that doesn’t) what do you have to lose?

Here's a link to the full podcast interview if you're intrigued. And if you have an example to share for yourself, email me at abby@recurnow.com so we can discuss. We also have a talk from Dan Wolchonok, “product guy at Reforge,” on experimentation for revenue. That's here.

AMAs (or “ask me anything”s) have apparently become a hit on Capiche. We’re a big fan of the AMA here over at ProfitWell, and our very own Patrick Campbell just so happens to be on Capiche’s next go-round. (Capiche is a “secret society for SaaS power users,” revolving around what they call “honest conversations around SaaS.”)

And the Capiche team started an AMA series that’s been pretty damn useful—covering topics like the best workplace software, selling software in the early stages, pricing transparency in SaaS, and usable software to become a better leader—with people like Alex McCaw at Clearbit and Merci Victoria Grace, an investor at Lightspeed and Founder of Women in Product, formerly over at Slack.

Here’s a question & answer from Merci’s AMA to give you an idea of what they're all about:

Capiche asks, "What do you look for in SaaS companies you’re considering investing in?" 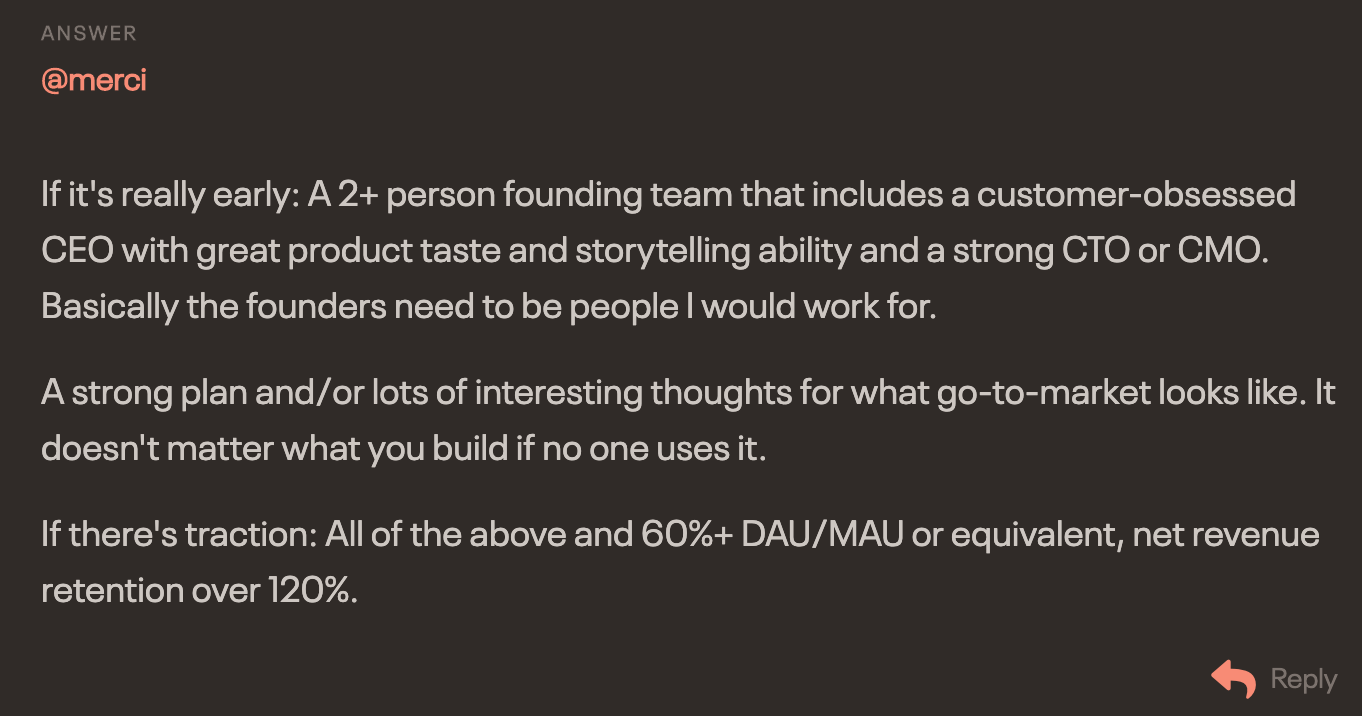 There is plenty more where that came from, so be sure to check them out for yourself.

And the winners are...

However, we’re also reminded that it’s not often clear which startups have that concrete, underlying potential. And Enterprise Tech 30 is asking: Is there a more insightful, objective way to identify our industry’s leading private companies? To do so, they present the second annual ET30, a list of the most promising private companies in enterprise tech, as determined by VCs in the space.

And we want to shout out a few we’re big fans of over here...

In the early stage category we see our friends Zapier, Notion, Clearbit, and productboard make the list. In the mid stage: Webflow. And in the late stage category, we’re all about Stripe, Gusto, and GitLab.

Because we've worked alongside these teams or utilized their software to better our own operation in some regard, so we’re pumped to eye them on this list among impressive companies in the space. Be sure to check out the list in its entirety, though, linked here. (And let me know if I missed any we should be leveraging in the future.)

That’s it for your February 27 episode of Recur Now. Check back here tomorrow for more, and remember: this show is for you. Send me a note at abby@recurnow.com if you have news you want to spread or thoughts on any topic we cover here.

We are expanding our crew, hiring in roles across the board. You can head to profitwell.com/careers if you’re interested in working alongside our team.

This has been a Recur Studios production—the fastest-growing subscription network out there. If you find use for this show, subscribe for more like it at profitwell.com/recur.

In this episode of Recur Now, we encourage a wellness check for the leaders and the makers.

In this episode of Recur Now, we're guiding your metrics with a compass.

In this episode of Recur Now, Verizon Wireless acquires BlueJeans. Plus, a whole slew of virtual events for the taking.

Navigating Subscription in the Air

In this episode of Recur Now, we're flying.