Welcome back for episode two of Tradeoffs, the show where Hiten Shah (FYI and Product Habits) and I take a look at how popular companies make decisions and the impact of those decisions. This week, we’re investigating a company that both Hiten and I have looked up to in the past — note-taking and organization powerhouse Evernote. They’re an established leader in the market and one of the first movers in the space, but the tradeoffs they’ve made to get there have put the company in dire straits.

The biggest problem Evernote has is product-market fit. As big as Evernote is, they really don’t have a handle on what their customers actually want. And while a strong freemium acquisition strategy netted them 225M users, they’re not taking advantage of that base at all. As an 11-year-old company, we can assume that they’re battling some pretty strong tech debt issues as well, which really isn’t a good place to be with so many new competitors entering the market.

Table of Contents:
1. The Tradeoffs
2. How freemium acquisition can go wrong over time
3. Product stagnation led to an unengaged user base
4. Evernote needs to figure out why users switch platforms
5. Drastic changes may help Evernote stay on top

How freemium acquisition can go wrong over time

Evernote was one of the first big freemium players in 2008, and they executed that acquisition strategy better than anyone else. They were also one of the first companies to double down on mobile apps. Riding that leading curve helped propel their growth early on, but when they didn’t change with the times, it put Evernote in a really difficult position.

Their biggest mistake was waiting too long to revamp their pricing model, giving free users a significant amount of time to get used to and rely on certain features. By adding limits to the number of devices a user can sync to on their free plan, they effectively alienated a big part of their user base.

Had Evernote made these changes earlier in their lifecycle, customers would have been trained to expect more changes in their plans. While both Hiten and I don’t know if limiting syncing on devices was the best choice when they updated their plan, it’s hard to see if there is another value metric that would have been a better choice. Limiting accounts based on number of notes or storage size could potentially have the same negative impacts on customer perception of their brand. 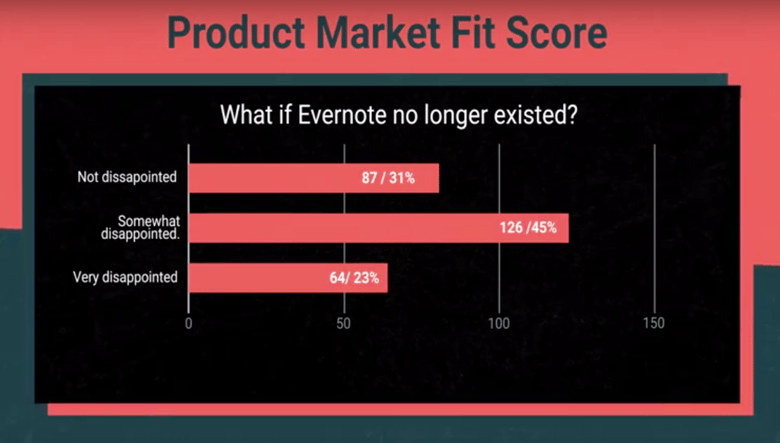 What we’re looking for is a threshold of at least 40%. This means that Evernote is not providing the type of value that customers expect from a note-taking app. And to move the needle on that number, they’ll have to make significant changes in the way they think about their customers.

We followed up to ask customers why they would be disappointed, and here’s what we found:

These survey responses are worrying, especially the 14% who aren’t using the product every day and the 13% who have no feedback at all. When you get feedback on a survey saying that the product is great, that puts your product team is in a tough spot because they don’t have any signals about what to work on in the future.

A lot of this can be traced back to their freemium acquisition strategy, which brings in users who are all over the map with their requirements and usage habits. As a product that is designed for daily use, we found that only about 25% of Evernote customers use the app every day. That means that when Evernote builds features that appeal to the other 75% of their customers, they can’t capitalize on the diehard fans who really care and are more willing to pay.

Product stagnation led to an unengaged user base

By trying to build a product for everyone, Evernote paradoxically made it more difficult to provide the kind of experience that many of their users want. As one of the first moves in the market, Evernote was in a position to dominate their competitors, but their early focus on niche apps failed and gave the rest of the market a clear understanding of what not to do when building a note-taking app.

Pulling focus away from their core value proposition also drove down engagement across Evernote’s entire user base. When we asked people, How often do you use Evernote? The results were really scary:

We’ve mentioned before that Evernote is essentially a daily-use product, but daily users accounted for only 21.38% of responses. That includes people using the app A few times per day and About daily. When you take a look at the survey results, About once per month is the biggest percentage by far, with just over 75 responses.

“As a product manager, I’d be worried because only 1/5 of the user base are using it daily, and we need to do something about that.” —Hiten Shah

This lack of engagement could explain the responses to our next question as well, What is the primary benefit you receive from Evernote?

When only about 1/5 of your user base say the primary benefit of your note-taking app is staying organized, that’s pretty telling. Combine that with the fact that approximately 1/10 of your customers don’t recognize your core value (syncing across devices) as the primary benefit, and you have a huge problem. Trying to appeal to everyone and not building the functionality that core customers want to use made Evernote’s product feel stagnant, which is definitely a tradeoff they should never have made.

This stagnation also explains Evernote’s NPS score. On a scale of -100 to 100, they score a 1, meaning that very few of their customers are happy with the product right now.

We asked a followup question to help suss out some things that Evernote can do to help turn things around by asking, How can Evernote be improved?

Hiten would definitely focus on the integrations as that’s where Evernote is lacking the most competitive advantage. But what’s even more telling is that 32% of people said the app was good as is. While it might sound like a good thing, when you combine that response with the NPS score of 1, it’s terrifying. Approximately 1/3 of Evernote’s customers don’t care enough about the product to think about how it can be improved. Evernote’s project managers must be having a really hard time figuring out how to change customer perception of the brand.

Evernote needs to figure out why users switch platforms

As the market continues to grow and new competitors enter the game, Evernote will need to double down on their retention efforts to survive. We’ve already seen that they’re not really taking advantage of their huge user base, and if they continue to lose customers to services like OneNote, Google Keep, and Notion, Evernote will be left behind entirely.

Another added issue is that a lot of these new players offer a “Switch from Evernote” function as a part of their own value proposition. I asked Hiten a similar question at the beginning of our chat because both of us have looked up to the company so much over the years, and I wanted to see if he actually used Evernote anymore. He’s switched over to Bear, and I now use Notion, which just goes to show you how serious Evernote’s retention problem really is.

“I think the low-hanging fruit is an app refresh. That's what the research shows. Evernote needs to be fresh and lively. It doesn't mean you have to add features, just brighter colors or something like that because folks think this company hasn't kept up with the times.” Hiten Shah, CEO and Founder of FYI.

To battle this, Evernote needs to find ways to show customers that they recognize the issues with the app and are actively making changes to address them. From what we’ve seen, people think the company just wants to rest on their laurels as the established incumbent.

That feeling is shown in the following graph: 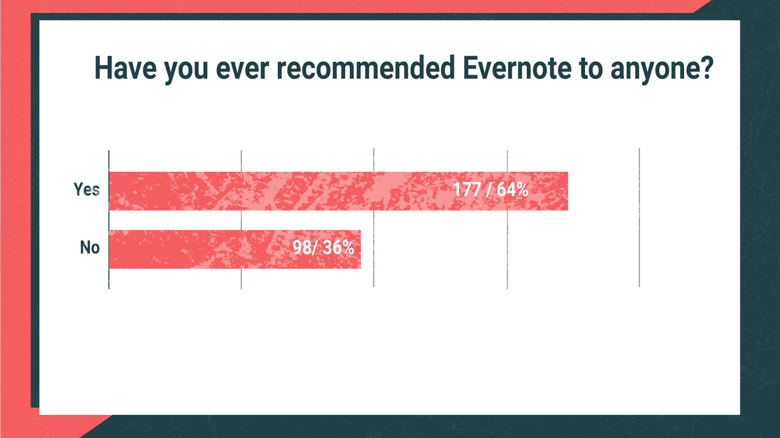 While 64% of people are still recommending Evernote as a tool, we would expect to see a much higher number for a company that holds so much brand recognition in the market.

We asked these people, What would you likely use as an alternative to Evernote?

Both of these platforms integrate heavily with other services. OneNote, especially, comes bundled with Office. Google Keep is the native phone app, which we also see as an alternative for some of the survey respondents.

These responses show that most people aren’t really all that thrilled with their alternatives either. If Evernote was able to update their app to give it a new look and add in some integrations with more popular platforms, they could easily keep some of their customers around.

The tradeoffs Evernote has made over the past decade helped them climb to the top of a nascent market. But their competitors are now amassing millions of their own users. Evernote needs to find a way to fix their problems with low engagement and infrequent usage.

The difficulty with making these changes all comes down to potential internal constraints. The speed at which Evernote can make changes to their product will have a direct impact on their ability to fight off some of these up-and-comers. If Evernote is facing significant tech debt issues, the engineering and development time required to release any changes jumps up quickly. Increased speed often comes with a tradeoff in quality, which they also can’t afford.

An app refresh is probably their best option at the moment. While it doesn’t address some of the more serious issues Evernote faces, it can definitely work to win back some trust from their user base. If they start thinking about the 225M user base at their disposal as leads instead of customers, they can also start with a more targeted outreach to give specific segments what they actually want to engage.

That wraps up episode two of Tradeoffs. We’d love to hear your feedback, so let us know what you think about the new show on social media.

In this episode of Tradeoffs, Patrick and Hiten take a look at how Spotify dominates streaming music and what tradeoffs they'll need to make to maintain that position.

Transparency as a Mindset, Not a Business Model

In this episode of Tradeoffs, Patrick and Hiten take a look at how internal and external transparency result in tradeoffs for both employees and customers.