Today we're talking about something Peter is admittedly not very good at—taking notes. More specifically, we're taking a look at the pricing strategies of established note-taking and organizing platform Evernote and their up-and-coming competitor Notion.

We're digging into the data to see if Notion can unseat Evernote with their positioning as an all-in-one workspace, or if Evernote's momentum and longevity will help them stay on top. Peter and I build on our analysis of Evernote's pricing from Season 3 and talk through how both platforms need to focus on going premium and finding the right target customers to scale their growth.

Evernote's pricing has evolved a lot over the years. As a result of this consistent tinkering, their pricing page, while well-designed, still leaves a lot to be desired. If Evernote's not careful, they'll end up with a page like Salesforce, which is one of the worst we've ever seen. Notion, on the other hand, pretty much nails it with their simplified approach.

When you click to compare Evernote's pricing plans, the page looks more or less like you'd expect.

It shows each tier with a short tagline explaining what that tier is good for. This is a nice touch, but the brevity of it makes the differences in functionality difficult to discern. To figure that out, you have to scroll down the page and find your way through a series of complicated menus: 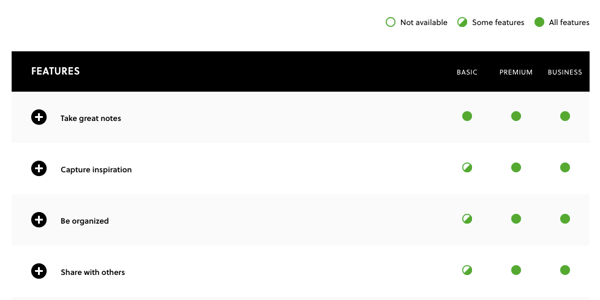 I'm not really a fan of this style of pricing page. Anything that needs a legend on the top right is an immediate red flag. This structure requires that customers click on every feature to pull up a sub-menu with the actual feature information: 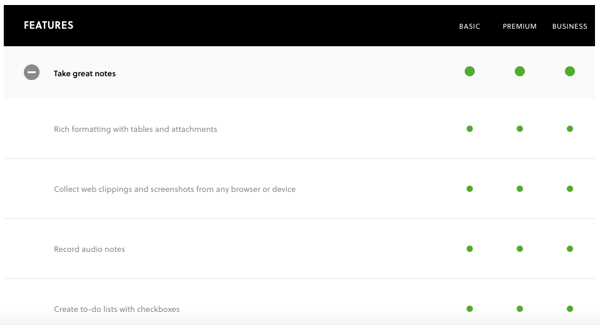 This makes it almost impossible to figure out exactly how each plan differs without spending an insane amount of time digging through their menus. Evernote could do a lot to streamline this page and turn those short, nondescript taglines into a better summary of the information on the page. I think it's great they include a breakdown of every single feature, but cleaning it up would make the page clearer.

When we compare this to Notion's pricing page, we see how a quick overview of each plan can really help clarify things. Even with a much larger product offering, Notion does a great job of differentiating what is available with each tier:

The only point of confusion is in the Personal tier, which only allows for a single member when all others are unlimited. Simply calling this out would clarify it for the customer and keep everything in line with the descriptions of their Free, Team, and Enterprise tiers.

They also include a dedicated page called “Switch from Evernote”: 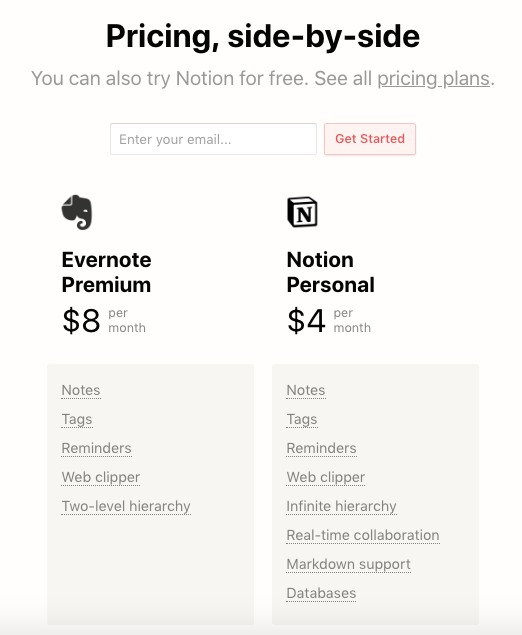 And they use this as an opportunity to break down the feature differences as well as the price.

“One thing for Notion is that they have made it incredibly easy for someone to get off another platform and onto theirs."

This is an awesome tactic for competing with an established company like Evernote. A lot of Notion's pricing power comes from making it easy to switch platforms, so they really have to nail the onboarding experience from the get-go to be successful.

Willingness to pay increases in customers who are more organized

This might not come as a surprise, but the more anal-retentive a customer is, the more willing they are to pay for a note-taking/organizational platform. That said, neither Evernote nor Notion do a great job of building their pricing strategy around this fact. Both companies need to be more targeted with the types of customers they go after in the market.

We surveyed 2,089 current and prospective customers of both platforms and graphed their monthly willingness to pay based on how organized they feel.

What's interesting is that Evernote's upside isn't as high as Notion's, which means that the Well-Organized and Anal-Retentive customers are more willing to pay for Notion. That's likely due to Evernote's lack of additional product offerings like wikis and databases.

This is where Notion has more potential for growth than Evernote, and they can start bumping up prices a little bit to capture this willingness to pay. Their Personal plan starts a $4, which is great for someone who's Not Organized, but they're not really who Notion is going after. Their target buyer persona sees more value in the product than that.

You see the chance for upward swings in the Well-Organized and Anal-Retentive segments as well. Notion's Team plan is only $8, so they could easily come up to $12 without customers getting upset. Right now, the Enterprise plan is really where their pricing hits the upper ends of these ranges. But the Anal-Retentive customers would certainly pay for it.

Both Evernote and Notion need to do some work to boost their premium status, and Notion's current pricing strategy puts them in a better position to do this. Restructuring their Add-Ons will boost average revenue per user (ARPU) and help them move away from the bottom of the market. Evernote is currently going after a slightly higher price point, giving them less room for change.

We see this in monthly willingness to pay based on whether or not a customer is looking to buy for themselves or for an entire team. 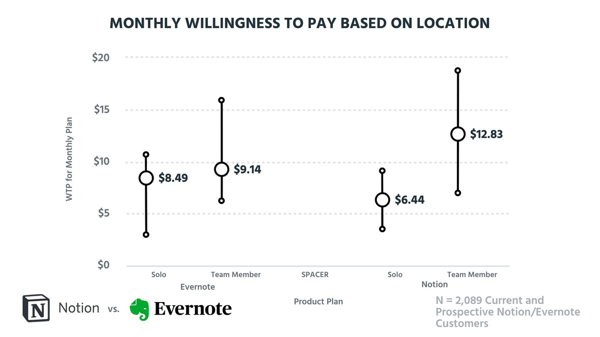 Both Evernote's Premium and Business plans are in the upper ranges of customer willingness to pay. This means they're going after the people who really care about the product, those who would be categorized as Well-Organized or Anal-Retentive. To continue growing in this way, they'll have to do a lot in terms of strategic product roadmapping. Keeping their higher-priced customers happy means understanding exactly which features they feel are important.

With Notion's significantly more robust product offering, they're actually averaging out to a lower overall willingness to pay at the Solo level. Positioning their platform as an all-in-one-solution is making it difficult for Notion to showcase value across the board, and their bottom-end pricing doesn't change this perception.

“If I was working on Notion and looking for another growth lever, I would focus on potentially moving the price point up for their Team plan.”

By making their Team plan more expensive, Notion can capitalize on the product's ability to grow with a team. I see something akin to the kind of growth Slack experienced in the early days—where a few dedicated individuals started using the product, saw its value, and made a case to roll it out to the whole team. In that way, Notion is in a great place to start segmenting out some of their products.

With that in mind, let's take a look at the relative feature preference in relation to overall willingness to pay in this value matrix.

This is super interesting because the graph shows us a few ways that both Evernote and Notion can adjust their pricing in the short-term for big wins.

First, let's talk about “Sync Across All Your Devices.” That's table stakes for a note-taking app, and Evernote actually limits their free plan to sync to only two different devices. As one of their main upsells in the Premium tier, this isn't going to be that effective, as customers really aren't willing to pay for it. By not limiting this ability in their platform, Notion makes itself more appealing.

Notion also has a huge opportunity in terms of Add-Ons. As a more robust platform, they can easily start branching off and offering more Spreadsheets & Databases features or an updated Knowledge Base at a premium. While this might hurt retention for some of their customers, it's definitely something to consider as their platform continues to grow.

Which pricing strategy is the most noteworthy?

I was an Evernote user for years before Notion came around, but now I'm 100% in their camp. Their wider platform makes it easy to scale projects, so I use it for larger ideas. Peter's sticking with Evernote as a user, but mostly because he's adverse to change.

As investors, it's another story. We're both on team Notion. Evernote hasn't really had the best pricing journey up to this point, and there's still a lot of work they need to do. Notion is growing quickly and, with a few small tweaks to boost their premium tiers, is in a great position to overtake Evernote in the long run.

This is one of those situations where an all-in-one platform can really win. By bringing together similar tasks into a unified experience, Notion can build a broad base of customers to support their growth.

Cloud storage titans Box and Dropbox square off in today's episode of Pricing Page Teardown. We talk feature differentiation, positioning, and competing at opposite sides of the market.

In today's episode, Patrick and Peter dig int the pricing strategies of social media management tools Buffer and Sprout Social. Tune in to find out more about why design matters and who comes out on top.