If you've recently visited an office building for a meeting, an interview, or a corporate event and signed in using a touch screen interface, you may have already interacted with Envoy. As a visitor management company, Envoy is aiming to reimagine the modern business lobby.

In this week's Pricing Page Teardown, Peter and I take an in-depth look at Envoy's tiered pricing structure to assess the strengths and weaknesses of the company's pricing page. To find areas for improvement and assess Envoys pricing strategy, we asked over 1,000 customers and potential customers how their willingness to pay fluctuated based on their company's size and the number of offices and how much those customers valued each Envoy feature.

Overall, Envoy has a great pricing page. Our analysis does, however, shed light on a few areas of improvement that could allow the company to move more customers into higher pricing tiers.

Envoy's pricing strategy is built on a tiered pricing structure. They have a free Basic plan, $99 Standard plan, $249 Premium plan, and Enterprise offer. As the price increases, so does the functionality. This maps to the customer journey and provides specific feature sets based on specific company types and needs.

For small companies or companies that want to test the product, the basic tier is a low barrier to entry and provides the bare-bones functionality that could get a customer hooked. As a company grows, and documents such as NDAs become more important, the added functionality of legal document signing is meant to entice a customer into the standard tier.

Each tier after that offers more features and functionality that improve the user experience and appeal to larger companies that are more committed to proving a seamless visitor sign-in experience.

On a surface level, this pricing page is very clean, logical, and effective. But we believe that Envoy has significant opportunity to increase their prices and reorganize their features to move customers into the higher tiers more easily.

The success of a tiered pricing plan like Envoy's largely hinges on how well each tier is priced. You don't want to give away too much value at a low price, but you also don't want to set a price so high that customers won't move up a tier because of cost.

To get an idea of how Envoys price points could or should change, we surveyed over 1,000 current and prospective Envoy customers and plotted the relationship between company size and willingness to pay per month: 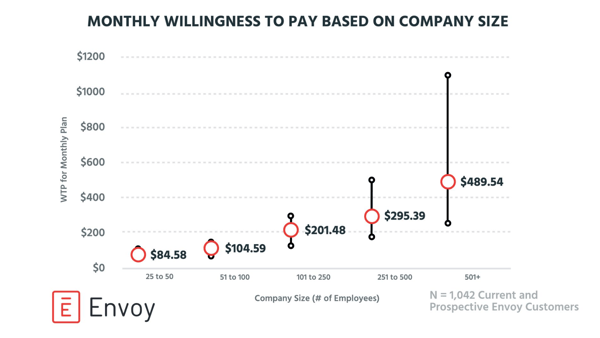 Based on this data, Envoy's standard plan is right where it needs to be. The $99 entry cost is just high enough to weed out the tire-kicker small accounts that will churn quickly, but it's also low enough that the purchase wouldn't require much oversight or approval. Furthermore, $99 is perfect for smaller companies that are just starting to get serious and grow their teams.

"The $99 entry cost is just high enough to weed out the tire-kicker small accounts that will churn quickly, but it's also low enough that the purchase wouldn't require much oversight or approval."

We suggest that Envoy take advantage of the higher willingness to pay from their larger companies and increase that price point. By pricing their premium tier on the lower end of the scale, Envoy is missing out on potential revenue from midsize to large companies.

One reason Envoy may have chosen this lower price point is because they bill per location rather than per company, and large companies are more likely to have multiple offices. But we found that even companies with multiple offices are willing to pay a high price for each location.

In the graph above, you can see that even companies with six or more locations are willing to pay, on average, $201 per month, bringing their monthly total to over $1,200 dollars. Some are even willing to go up to $350 a month per location

Normally, customers would expect to pay a discounted price per location if they were buying a product in bulk. For Envoy's customers, that doesn't seem to be the case. Taking that into account, there is a lot of potential revenue to be gained from large companies and those with a lot of locations. The current premium price point only scratches the surface.

A tiered pricing plan also needs to make sure that the features placed in each tier will effectively move customers from smaller to larger pricing plans. If, for example, most of your features are included in a standard plan, few people would feel the need to upgrade to a premium plan.

While I don't think Envoy gives away too much value in its smaller plans, I do think they fail to set value appropriately in each tier. When we analyzed each feature based on a customer's relative preference for that feature and their willingness to pay for that feature, we identified three main opportunities for Envoy to reorganize their feature offerings to get more out of their customers.

"While I don't think Envoy gives away too much value in its smaller plans, I do think they fail to set value appropriately in each tier."

1. Move badge printing and legal document signing from the standard plan to the premium plan:

These two features are widely preferred and valued by customers. They are also the features customers are willing to pay the most for. Instead of using these features as a way to get people onto a paying plan, they should be used to move people into higher payment tiers because of their high value and ability to motivate people to pay more.

3. Move more features out of the tiers and into their own “add-on” category:

Many features currently offered in the premium and enterprise plans have the potential to generate revenue but won't necessarily move a significant number of people to upgrade to a different tier.

For example, the multiple sign-in flows aren't a feature many customers want, but those who do are willing to pay a lot for it. Rather than placing this feature into a pricing tier, it would be more effective as a separate add-on, as Envoy has done with the deliveries feature.

How does Envoy's pricing model score?

Overall, this is a great pricing page. As Peter notes, the page has a clean design, and Envoy provides their customers with a lot of value early on to help the product stick.

Peter's end score for Envoy is an 8 out of 10. I am a bit more critical and give them a 7.3 out of 10. With some minor adjustments, that score could certainly rise. But for now, I think Envoy is pricing their tiers a bit too low and missing out on significant value from their larger accounts.