If you haven’t actually used Cameo by now, you’ve probably heard of it.

The app allows anyone to get brief, personalized video shoutouts from celebrities.

Cameo was heating up before the quarantine, but in lockdown, it’s exploded. I used it for the first time recently for a birthday present and was shocked at how easy it was.

Say I want to surprise my brother-in-law, a die-hard Yankees fan, with a Cameo from Mariano Rivera for his birthday.

First, you find Mariano’s page within the app:

[Editor’s Note: Mariano’s price is on the high end, but a drop in the bucket next to Caitlyn Jenner’s $2,500 fee…]

Which brings you to a form where you fill out the details of your request: 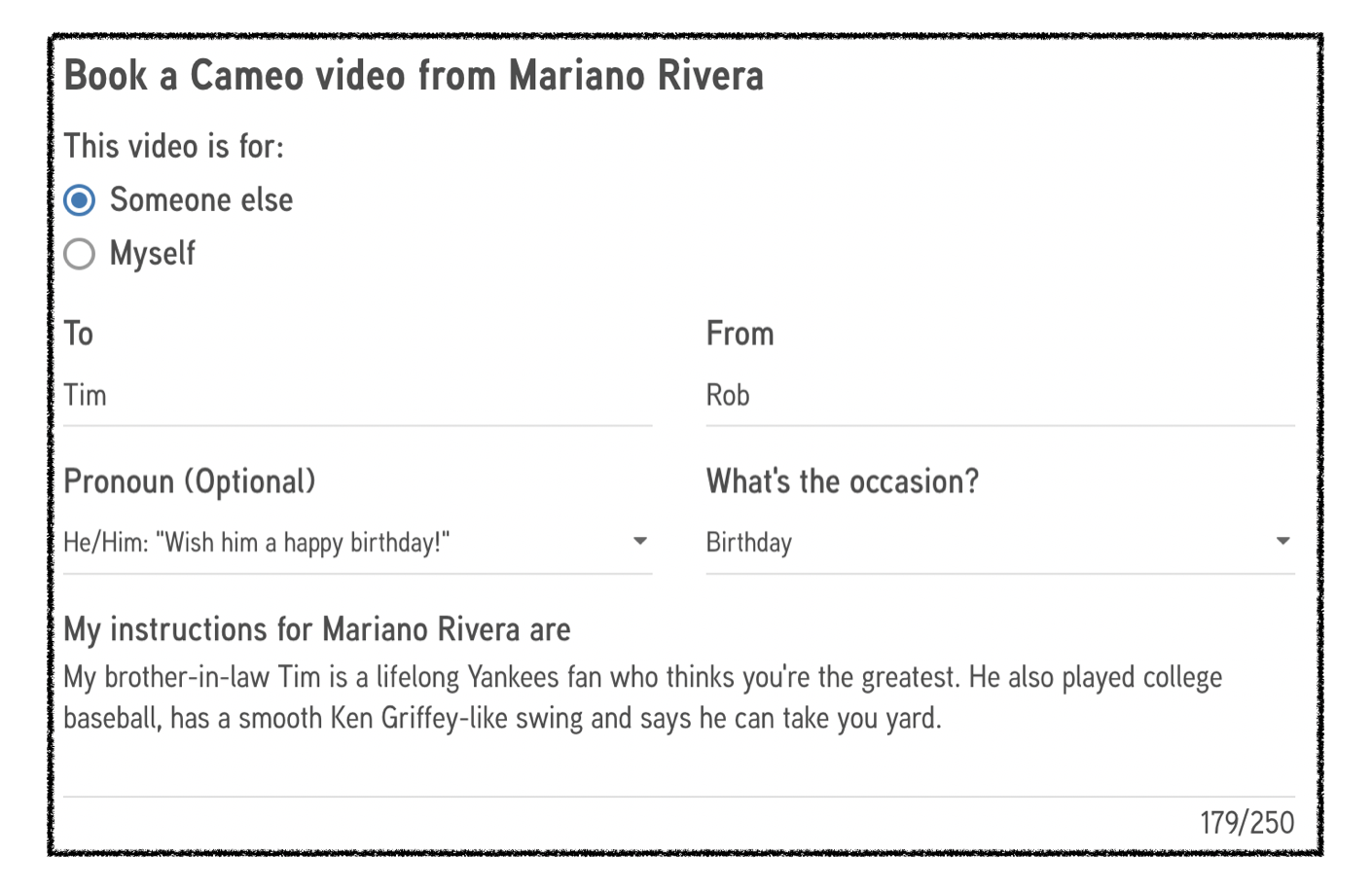 As you can see, the format is simple. You pick who the Cameo is for, choose the occasion, then describe your instructions for the celebrity in 250 words or less.

After making the request, the next steps are laid out succinctly: 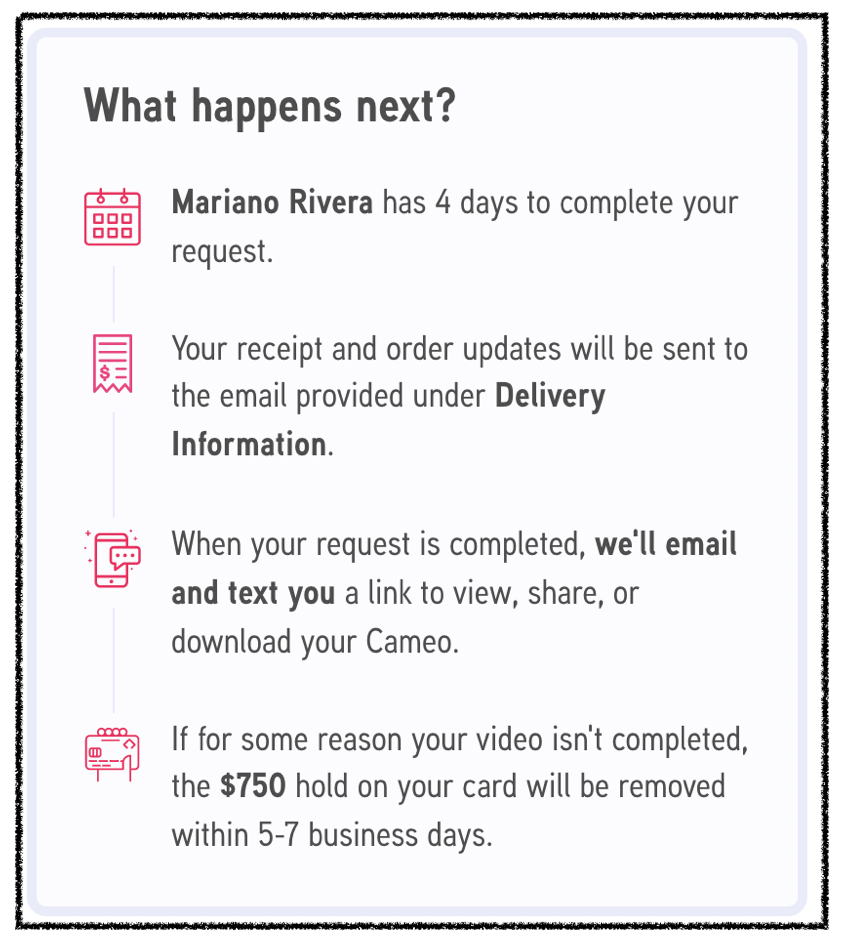 The whole process takes 5-10 minutes tops, which is one of the keys to Cameo’s explosive growth. They’ve made something that used to be impossible, celebrity access, incredibly easy.

Even with their recent growth, it’s easy to not take Cameo seriously. A birthday wish from a B-List celebrity is the type of novelty that can quickly lose its luster.

However, with the release of Cameo Live, which allows people to Zoom-chat with celebrities for 10 minutes, they’re opening the doors to a wide range of future offerings, including an opportunity to be a major player in the passion economy.

If you’re still skeptical, you’re not alone. Cameo has all the makings of a classic trap that people fall into when evaluating disruptive companies. Specifically, the next big thing is often dismissed at first as a “toy.”

In 2010, a16z partner Chris Dixon wrote a seminal blog post called The next big thing will start out looking like a toy. In it, he describes a dynamic that happens repeatedly in tech and beyond. In short, a disruptive company gets dismissed by incumbents because the early version of their product is only a small piece of what it ultimately becomes.

Disruptive technologies are dismissed as toys because when they are first launched they “undershoot” user needs. The first telephone could only carry voices a mile or two. The leading telco of the time, Western Union, passed on acquiring the phone because they didn’t see how it could possibly be useful to businesses and railroads – their primary customers.

Dixon goes on to explain that there are two key variables to think about when considering the future success of a disrupter - product development and external forces.

When evaluating disruptive companies, people often over-index for product development but underestimate the power of external factors. This is a big mistake because external forces are far more powerful than adding features and functionality.

Back to Dixon’s telephone example:

What Western Union failed to anticipate was how rapidly telephone technology and infrastructure would improve (technology adoption is usually non-linear due to so-called complementary network effects).

In Cameo’s case, there are plenty of features they can add on the product side, and adding Zoom-calls is a step in that direction.

However, there are also external forces taking place that bode extremely well for their future prospects. Specifically, the accelerated adoption of digital tools caused by COVID-19 alongside the rise of the passion economy.

First, COVID-19 has forced us to embrace digital tools much faster than we otherwise would have. McKinsey recently reported that we’ve jumped five years into the future in terms of digital adoption across both businesses and consumers. Case in point, how many people have had to walk their parents through their first Zoom call over the last few months?

Second, the passion economy is in the early innings, but growing quickly. Li Jin has been at the forefront, chronicling the rise of creators monetizing their individuality in the mold of Kevin Kelly’s 1,000 True Fans.

In her post, The Passion Economy and the Future of Work, Li charts the platforms that have evolved over the last few years to empower creators: 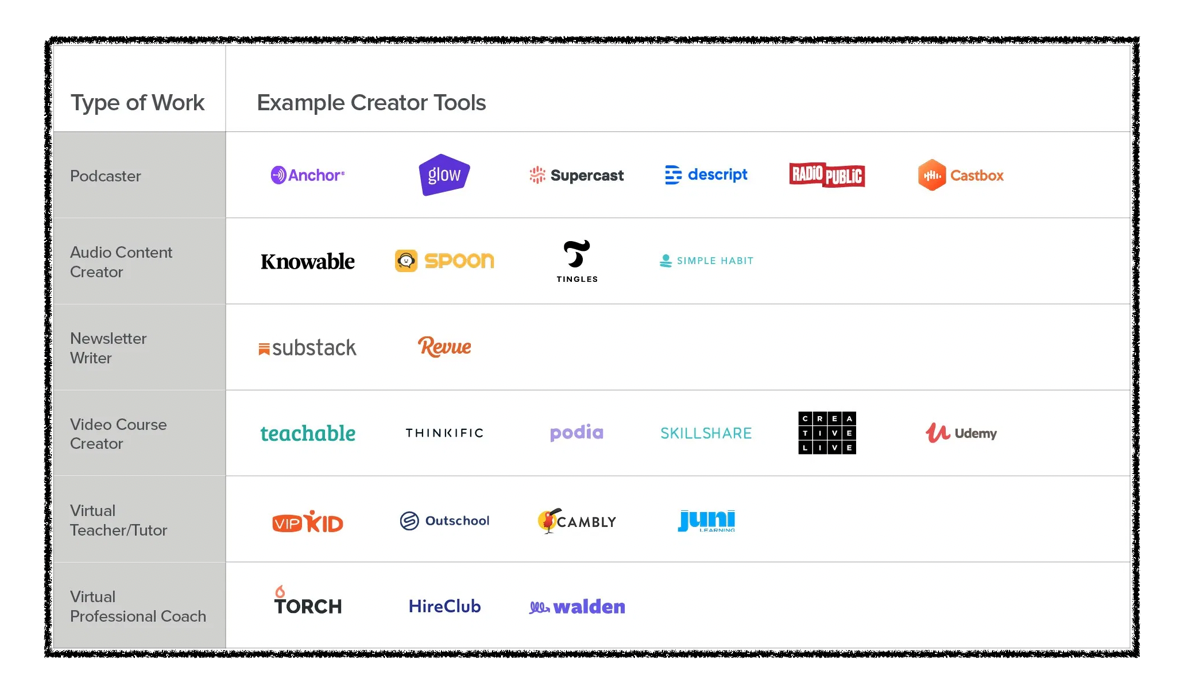 She also alludes to two types of products that foster the passion economy: SaaS solutions and Marketplaces. SaaS solutions take care of much of the work for individual creators but force them to develop their own audience. Marketplaces, on the other hand, utilize two-sided network effects to match supply with demand.

Cameo falls into the marketplace category, and while their current offering is limited, their ambitions are much bigger. Here’s how Cameo CEO Steven Galanis describes their ultimate goal:

What we’re really building at Cameo is the marketplace where for X amount of money, you can do Y activity with Z person. We’ve just been focused on doing one Y activity with as many people as possible.

What a lucrative equation!

The introduction of Cameo Live is a strong step towards realizing that goal. Let’s dive into the possibilities…


Get Good Better Best delivered to your inbox

Evolving from one-way 30-second shoutouts to two-way interactions is a big deal for Cameo, and opens up possibilities to expand the product along two axes: vertically and horizontally.

First, they can develop their product vertically within their existing celebrity focus. Zoom enables users to truly connect with celebrities, rather than just receiving a pre-filmed video. This obviously makes it a higher-value product, allowing Cameo to drive higher fees from customers that can afford it and want deeper interaction.

While the current Cameo Live offering is limited to AMAs and Meet and Greets, they could expand that widely. Consider the Mariano Rivera example from above - instead of just getting a birthday shoutout, what if I could book Mariano to teach my brother-in-law how to throw his famous Cutter?

Here are some other examples within their current celebrity focus:

Beyond thematic offerings for Cameo Live, the natural evolution here would be to go deeper than video. Some have argued Cameo should eventually offer real-life event booking. Drake famously performed at a Bar Mitzvah in 2011 for a reported $250k. If Cameo facilitated this kind of transaction and retained its 25% fee, it could be a sizable business.

While there’s plenty of room for nuanced products between each of these 3 offerings, here’s how their product evolution might look if they decide to focus on growing vertically within their celebrity focus: 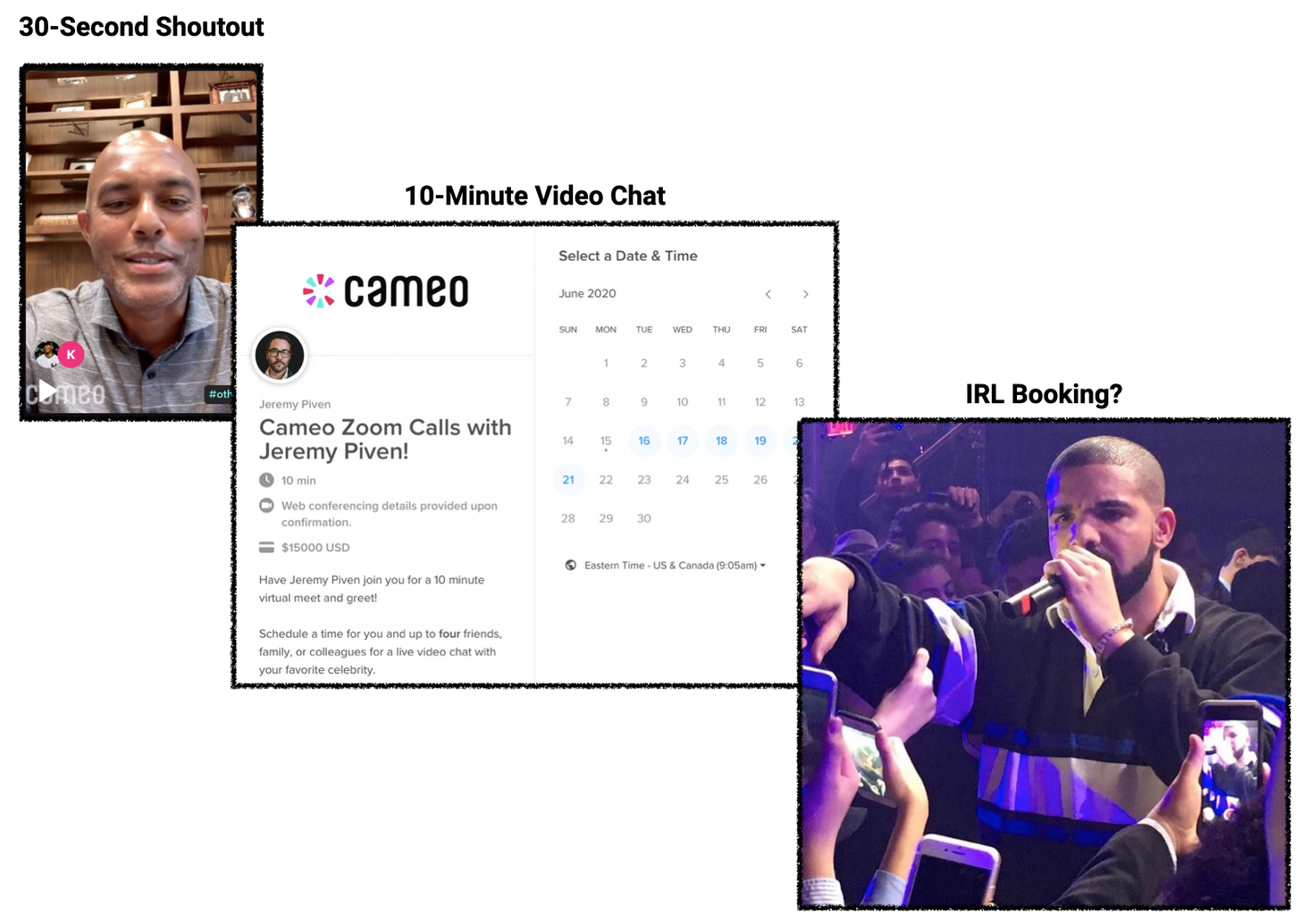 My biggest gripe with Cameo expanding vertically within celebrities is that the Zoom calls are already extremely expensive and limit their addressable market considerably. Take Jeremy Piven - he charges $15,000 for 10 minutes!

The second, and in my opinion, more interesting option, is to expand Cameo Live horizontally, going beyond celebrities.

This is where the passion economy kicks in, and where Cameo could serve the long tail of creators and professionals rather than focusing solely on famous people. Remember their magical equation - for X amount of money, you can do Y activity with Z person. Nowhere in that equation does it say that Z person has to be famous!

With non-celebrities, Cameo could drive potential customers to experts across a wide range of fields, like fitness, style, health, home, etc. While platforms like Fiverr, TaskRabbit, and others allow people to book freelancers and service professionals for real-life jobs, Cameo could help these people monetize their expertise at the top of the funnel.

Take a stylist for example. They could list on Cameo with links to past clients and work. Similar to the current Cameo Live offering, they could offer a 10-minute trend report, and if a prospective customer wants a more customized experience, they could offer a 30-minute consultation with personalized style tips.

Here’s how the Cameo Live product evolution might look for celebrities and experts: 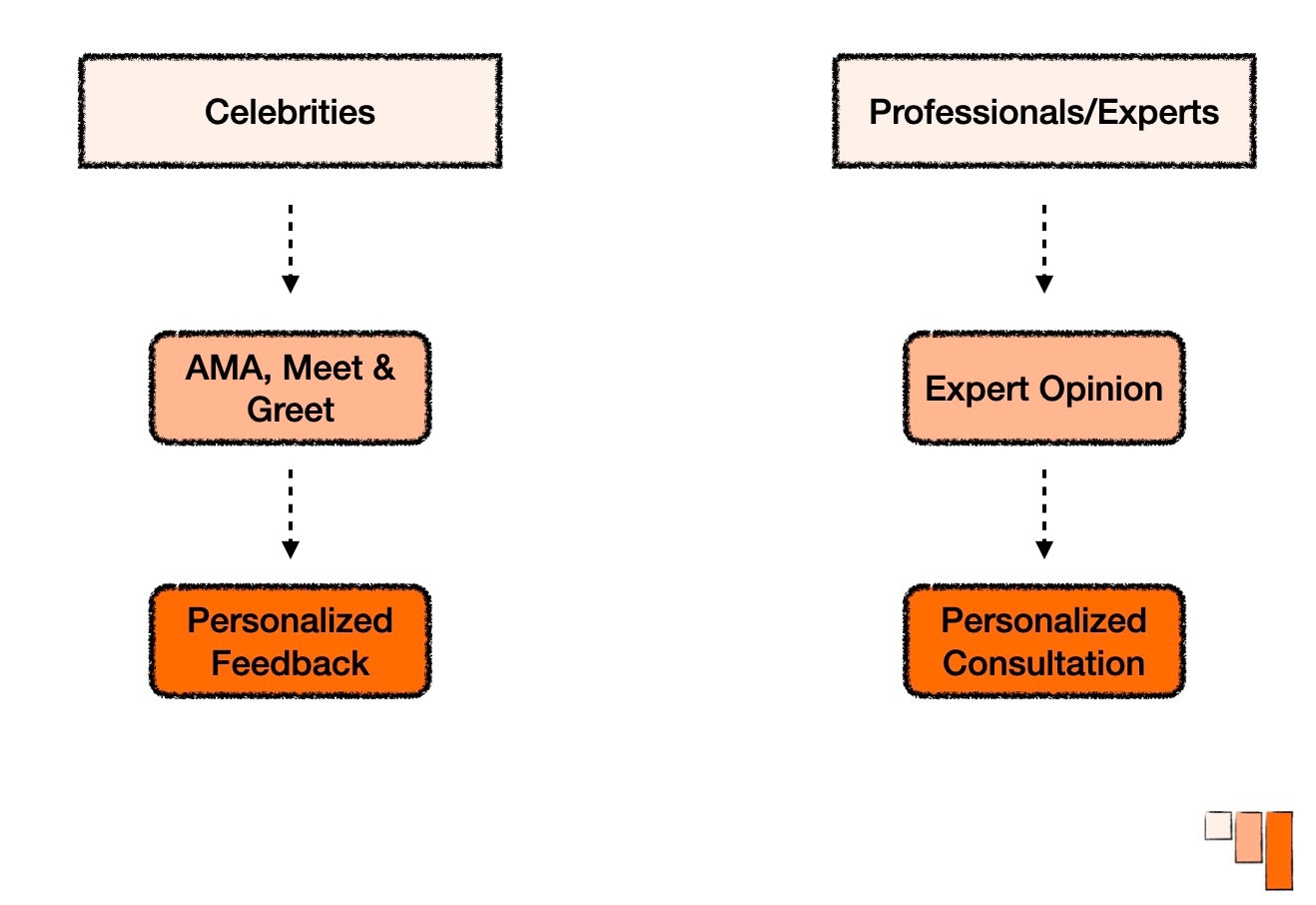 If Cameo ventures outside their celebrity bubble, the addressable market for their platform could be limitless. Cameo could become the go-to marketplace for quick, reliable, personalized expertise across any discipline. It’s easy to imagine a future where being an expert on Cameo becomes an end in itself. Just looking at the current 10-minute Zoom offering, there are endless opportunities for experts to build their professional reputation:

Cameo could legitimately launch careers, and at the very least offer people an alternative revenue stream on top of their primary business.

Going deeper within celebrity-land and broadening outside of it are two very different strategies for Cameo. Ultimately, I believe they could do both, but in the short-term, they should probably avoid trying to be all things to all people.

Cameo Live just launched, and they’re likely still looking at it as an experiment. So far, feedback seems promising… 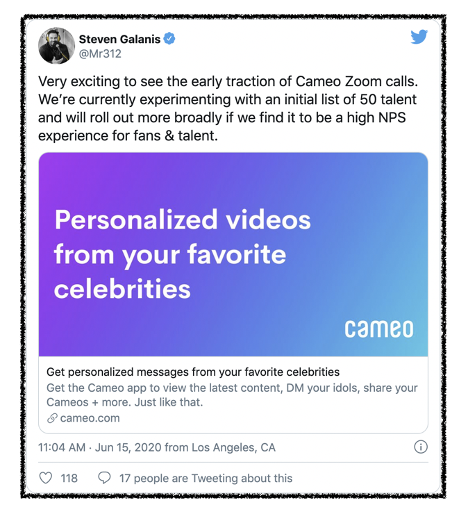 Along with the launch of Cameo Live, the company recently made a move to Los Angeles - doubling down on its ties to celebrity culture.

With the move in mind, if they were to broaden the scope of Cameo Live beyond celebrities, it would make sense to start with experts that are tangential to Hollywood. They could kick it off with stylists, make-up artists, physical trainers, and other professionals that align with their existing product.

This would allow them to test demand, and determine if there’s an appetite for services beyond the celebrity access they’re famous for while staying close to their roots.

Whatever they do, I have a feeling Cameo is just getting started, and look forward to watching their second act and beyond.

How Calm Won Wellness with the power of aligning positioning, product and packaging.