Today we’re putting two of the most popular social media management tools head to head: Buffer vs. Sprout Social. While Buffer ranks as the better known of the two, we’ll dive into which packs the bigger punch in one of the fastest growing startup segments.

As companies turn more of their focus and resources to building community and business through social media channels, pricing strategy, willingness to pay, and features will set industry leaders apart from the pack.

In this week’s Pricing Page Teardown, Peter and I compare Buffer and Sprout’s design, pricing, and features, as well as explore the broader opportunities in the social media management industry for businesses and investors.

The gap between site design and pricing

Both Buffer and Sprout have invested in beautiful page designs that effectively capture the attention of their target audiences. But there are some key choices right off the bat that reflect the differences between the each company's ideal customer.

Similar to Buffer, Sprout’s homepage design is strong and well thought out.

But it’s obvious from the get-go that Sprout is playing a different design game, focusing on the enterprise customers of a Hootsuite-level business rather than a growing company.

While Sprout’s site features a free trial CTA, they more aggressively pass customers down their sales funnel to paid products with copy that emphasizes the product’s ability to scale. 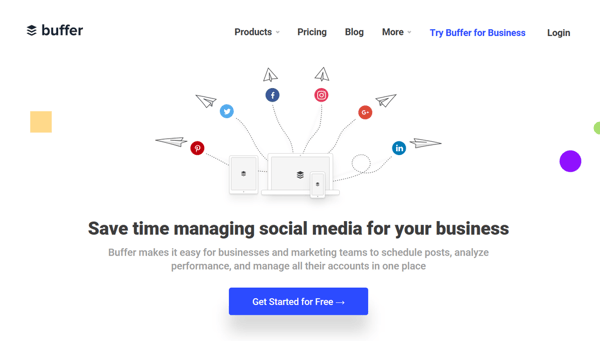 I immediately notice how slick the design of Buffer’s site is from the moment I load their homepage. It's clean, quickly directs customers to a call to action for a free account, and doesn’t waste time getting to the meat of the product's features.

The focus on their free accounts makes it obvious that most of Buffer’s customers are individuals or growing, small businesses that may not yet have the money or staff to seriously invest in social media management. For this audience, Buffer’s homepage does a great job of presenting their key features up front with copy that concisely explains what customers get and how they can move forward.

But despite both companies’ strong initial design impacts, both pricing pages fall short of expectations. 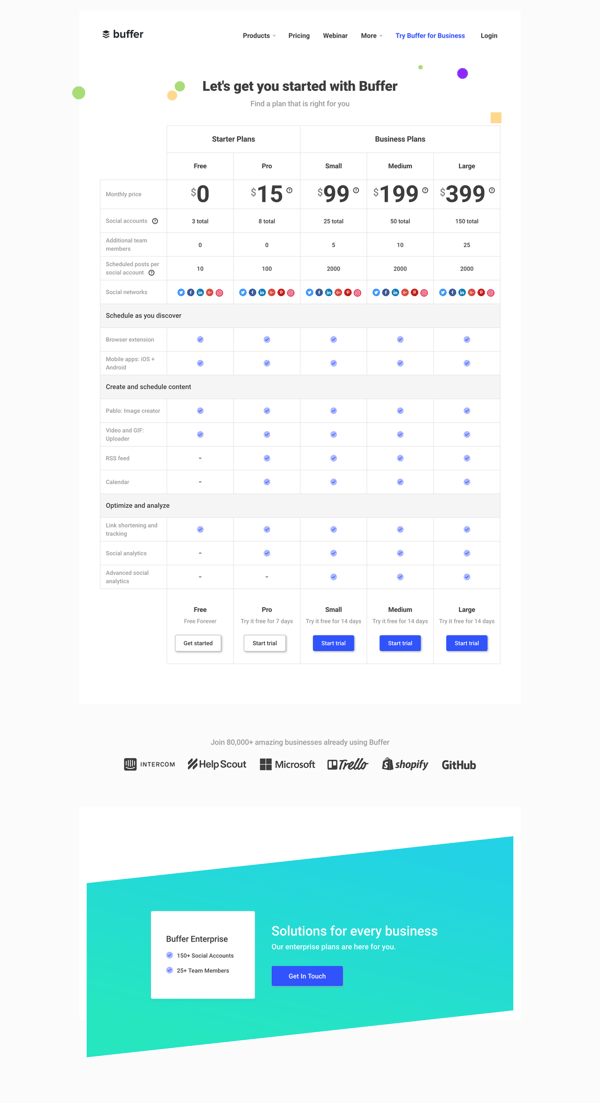 Right away, Buffer’s pricing page is too confusing and drops the coherency and hierarchy of the rest of the site.

We’re presented with plan names and feature breakdowns that aren’t super clear and leave customers feeling unsure of how to compare options. For instance, what makes a “small” plan worth more than the cheaper “pro” option?

On the other hand, at the end of the day, Buffer may not rely on their pricing page as much as the free plan CTA on their homepage to sign up users.

Regardless, we expected more from Buffer. 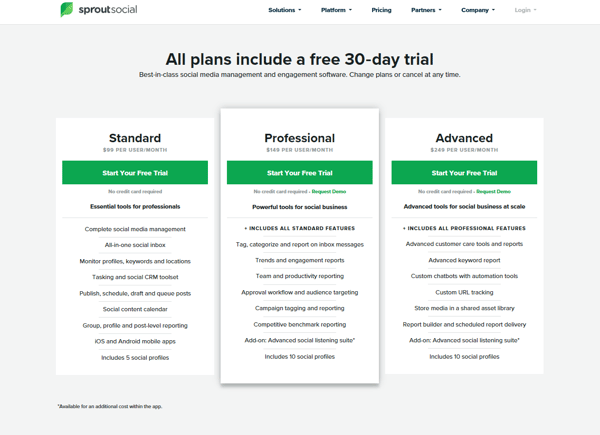 But it also fails to clearly communicate the differences in value between the standard, professional, and advanced plans and would benefit from more-direct copy that wouldn’t leave customers hunting to compare features under each plan.

After looking at both sites, it’s clear that, though they target different customer segments, both are held back by feature soup and overly confusing pricing page designs.

Making the most of willingness to pay for social media management

For social media management services, consumers' willingness to pay ranges pretty widely between growing companies and those worth over $25 million. 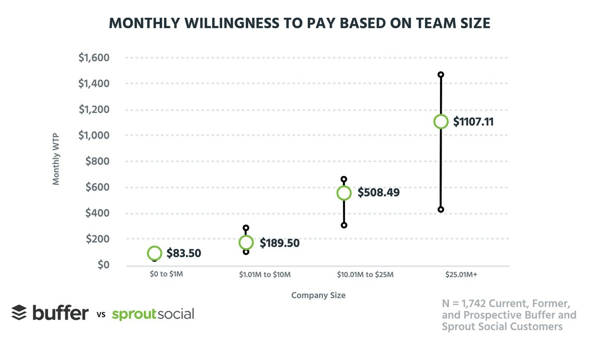 Based on the average willingness to pay of small and mid-market companies, Buffer is missing out on a lot of price potential overall.

"All of a sudden we’re looking at a world where Buffer is losing out on a lot of money here."

Based on willingness-to-pay data, Buffer's pricing generally misses the mark. Their starter plans—either free or $15 per month—are well below the $83.50 willingness to pay of companies valued under $1 million, while their business plans come in at $99, $199, and $399 per month, well over the price tolerance of smaller companies.

On Sprout’s end, their plans don’t meet the demand of growing businesses, and they also come in under the willingness to pay of companies valued at $10 million-$25 million and $25 million+, missing out on price potential, depending on team size at larger organizations.

Overall, both companies seem to be focused on competing with other social media management providers in a race to the lowest price, wasting the revenue that's available by actually increasing plan costs to meet what customers are willing to pay. 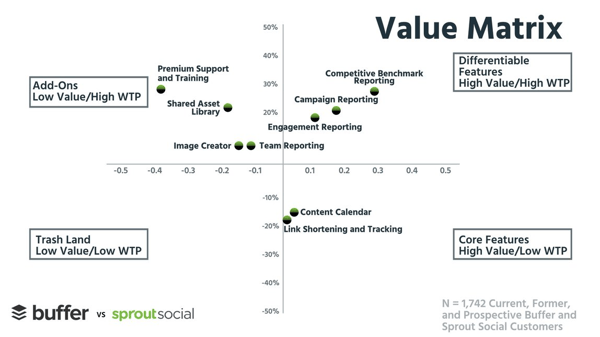 Despite a wide offering of features from Buffer and Sprout, both companies are messing up some of where the spread of features lie.

In Sprout Social’s world, competitive benchmark reporting and core features have worked out well for them. But their image creator that has been viewed as a retention feature so far would be better as an add-on or core feature. Not every company wants or needs their social media feeds to be highly visual, but the ones that do, really want it. They are going to be willing to pay extra for that image creation.

"A good rule of thumb when it comes to add-ons: If 40 percent or less of people in that tier are using it, you should take it out and either move it into another tier where more than 40 percent of that tier are going to use it or make it an add on."

A good example of this for both companies is premium support and training, which can pique the interest of customers across plan levels. If you are a small company, you just want the basics. If you are a large company or agency publishing hundreds of pieces of content a day across multiple channels, you want all the support you can get.

Additionally, data from companies looking for social media management indicate that customers are willing to pay more for channels like LinkedIn and Instagram that are viewed as more difficult to manage and grow. 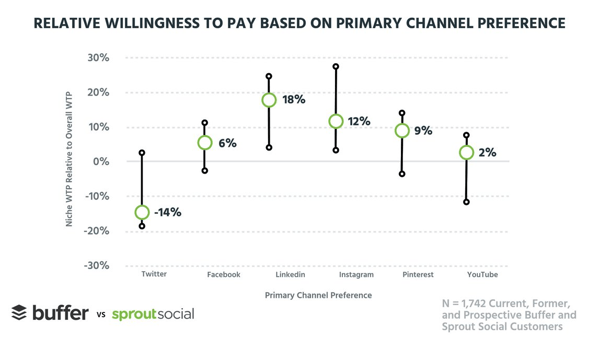 For instance, companies that primarily use Twitter have a willingness to pay that’s about 14% under the average, while those using LinkedIn and Instagram are 20% above the average.

While we definitely wouldn’t recommend basing your pricing strategy on channels, this shows a lot of potential for Instagram- and LinkedIn-specific products in the market moving forward.

Who does it best, and where should you invest?

So who does social media management pricing pages best? Honestly, it’s a draw.

It’s difficult to decide whether Buffer or Sprout has the advantage when they’re competing for different customer segments and both could do a better job capturing the potential market.

For smaller businesses, Buffer definitely seems to make more sense, with their per-user cost sitting at around $20 at the pro level, compared to Sprout’s considerably steeper $149 per user/per month professional plan.

From an investment perspective, we’re split.

Peter leans toward Buffer because of their greater brand awareness and growth potential. But, while it’s not always strictly about the money, I think that Sprout is better positioned for the growth game in the long run because of their scalability and strategy.

Facebook and Twitter do not have subscription pricing, but could these social media giants benefit from the subscription revenue model? We collected data from over 18k users which suggests that subscriptions could help resolve some of the current problems pitting users against advertisers.

Social coding platform GitHub makes it easy for developers and engineers to collaborate on projects. We talk about feature differentiation and how understanding the technical aptitude of your buyer is important.

Strava’s pricing is for beginners

On this episode of Pricing Page Teardown, we're talking about Strava, a fitness social network designed by athletes for athletes. Its users are diehard, but how’s its pricing strategy holding up?