Bloomberg’s online subscription created quite the kerfuffle when it was released, sporting a much higher price point than the majority of the competition. As a titan in the financial media market, their digital-first mindset puts pressure on The Wall Street Journal to reevaluate their pricing strategy in order to keep up.

We’ve taken a look at the financial media space before, pitting The Wall Street Journal against The Financial Times, so now that Bloomberg has its hat in the game, we decided to dig in again. This episode focuses on how willingness to pay and reading frequency impact potential pricing tiers and what both companies need to do to tap into a higher price point than they’re currently going after.

How much do Bloomberg and The Wall Street Journal cost?

Bloomberg’s All Access digital package starts out at $34.99 a month or $415 annually. The monthly package has a three-month introductory rate of $9.99 per month, or a one-year offer at $340. The Wall Street Journal’s digital offer starts off with an introductory rate of $1 for the first two months; $19.50 a month for a six-month subscription; or $15.60 a month for their yearly package.

Both offer various other pricing packages for print or a mix of print and digital, which makes for a confusing experience if you’re not sure which package is best for you.

When we take a look at the pricing pages for each of these media publications, focusing on their online subscriptions, Bloomberg definitely comes out on top. The Wall Street Journal uses a traditional media publication pricing page with a heavy-handed discount strategy. Bloomberg’s digital-first model shows they understand how the media game is played in today’s market.

Bloomberg’s design is modern and calls out their Digital package above all other options.

Bloomberg’s Digital package is the first thing you see on their pricing page.

This is a great tactic for showcasing their most high-value pricing tier, making it clear which package is the Best Value for potential customers.

Selecting See all details provides additional information about the features a customer gets access to for the monthly or annual price:

The features list shows visitors that, more than just providing information and entertainment, Bloomberg gives its readers access to a community, including live TV, podcasts, and a subscriber-only newsletter.

As you scroll down the pricing page, Bloomberg explains what is included in the other plans they offer. 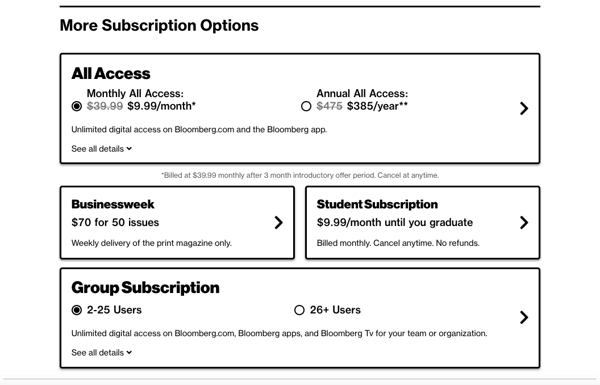 The Wall Street Journal, on the other hand, doesn’t present their important pricing and packaging information until much further down the page. They start out with the offer of a big discount, followed by a reinforcing statement of the value their publication provides. 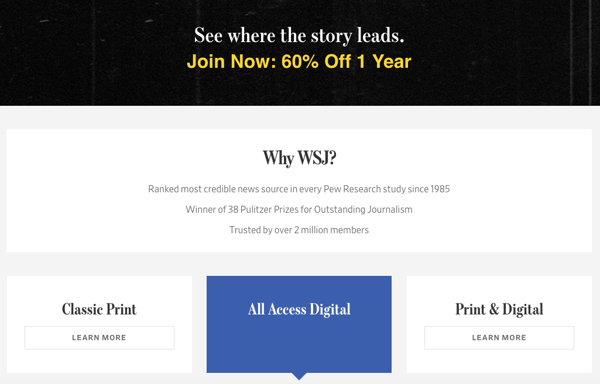 Only once you select Classic Print, All Access Digital, or Print & Digital, can you see the actual price of each product. Though All Access Digital is automatically selected (and colored blue on a mostly black-and-white page), it’s a needlessly confusing experience.

The Wall Street Journal does, however, do a great job of showcasing value for each plan. And they call out the annual option as the Best Value, which is always a good idea. 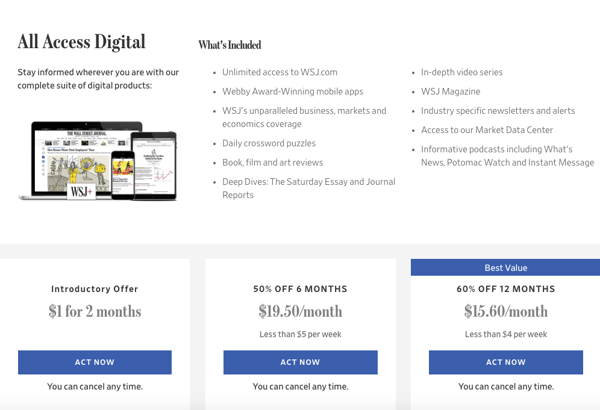 One thing we noticed is that their discounts are substantial compared to Bloomberg.

“The bothersome thing about these discounts is that I know, as a Wall Street Journal subscriber, that they offer these heavy discounts. Then six months in, they start charging me more, and all I want to do is cancel and go to the next one. At the end of the day, that just erodes the brand.”

Unlike Bloomberg, which serves mostly business and financial readers, The Wall Street Journal likely has to appeal to a wider base. Offering discounts is one way they appeal to that base. They need to bring in more people at a lower price point than Bloomberg to be successful.

Even though they’re priced higher than most of the competition, the willingness to pay data shows that Bloomberg’s current strategy is working. By targeting the right buyer personas with the right kind of features, and packaging those features into clear and easy-to-understand pricing tiers, Bloomberg commands a higher range of willingness to pay than The Wall Street Journal.

You see this in the overall monthly willingness to pay for each publication.

Monthly willingness to pay based on style.

This graph shows the willingness to pay ranges for each company, broken down by Digital Only versus Digital + Print. On the left we have The Wall Street Journal, coming in at the low end of the range for Digital Only with an average of $23.36. Bloomberg has a similar range, but shows a higher average at $28.48. That makes sense if you think about how each publication built their pricing strategy. The Wall Street Journal has a much wider target customer base, which drives down the willingness to pay, while Bloomberg is more specific with their targeting.

“It feels like The Wall Street Journal is trying to be all things to all people with their pricing even when their product isn’t optimized for that.” Peter Zotto, General Manager

The more specific targeting also helps Bloomberg justify a higher price for both their digital and print products. But even they could go higher into the willingness to pay range if they wanted.

Both companies need to think about packaging their print offerings better as well.

When we looked at the feature differentiation in each publication’s current pricing tiers, we don’t think they do a very good job of capitalizing on the potential expansion revenue we see in the Add-Ons section.

The Print Publication feature has a boosted willingness to pay of almost 50%, which is way above anything else in the Add-Ons quadrant. The Wall Street Journal might actually be closer to tapping into this revenue with their current pricing structure, but would need to build separate strategies for digital and print publications.

One way to accomplish this would be with a lower-priced digital tier, which would help with customer acquisition, and a print + digital tier, which taps into the increased willingness to pay. Bloomberg could do this as well, but it would require more restructuring on their part.

Neither publication capitalizes on reader frequency

Both Bloomberg and The Wall Street Journal need to do a better job of optimizing their prices based on reader frequency as well. Willingness to pay increases considerably as readers engage with the content more often, so each publication could use this as an opportunity to restructure their pricing tiers to appeal to certain types of readers.

We’ll take a look at the ranges for Bloomberg first.

Monthly willingness to pay based on reading frequency for Bloomberg.

Right now, Bloomberg’s $34.99-a-month price sits between the average reading frequency of 4-6 Days Per Week and 2-3 Days per Week. While they are already priced above the competition, they’re actually not getting as much as they could out of the monthly package.

With their current pricing and positioning in the market, Bloomberg’s product already feels more premium, which helps them justify a higher price. Using this data, they could break apart their current pricing tiers into two digital options, one to target the casual reader and one for the Daily readers, who are potentially willing to pay up to $50 a month for their subscription.

The Wall Street Journal faces this problem as well, averaging out their prices even lower for the 2-3 Days Per Week readers.

Monthly willingness to pay based on reading frequency for The Wall Street Journal.

Appealing to these customers is in line with their current strategy, but there’s a huge opportunity for Daily readers that The Wall Street Journal doesn’t even come close to capturing. While it would take a radical change to their pricing to accommodate the increase in prices, some of their Daily readers are willing to pay more than the $50/month we saw for Bloomberg.

Based on this data, it would make sense for both publications to reconsider how they structure their pricing tiers. The only potential problem I see is that they already have confusing and bloated pricing pages. To update their pricing effectively, they would need to find a way to make the change without introducing further confusion.

While both Bloomberg and The Wall Street Journal are titans in the media industry, they don’t do a great job of capitalizing on their readers’ willingness to pay. Both Peter and I read each publication religiously, but if we had to choose one as a winner from a reader’s perspective, it would be The Wall Street Journal. That sounds counter to the arguments we’ve made in the article, but goes to show you how appealing to a wider base can increase readership.

It’s a different story as investor, where both Peter and I would go for Bloomberg. They seem to have more of a handle on the digital-first model and have already grown a pretty impressive fanbase. We also really look up to them as a company, not only for their media publication, but their tools as well. The Bloomberg Terminal is used by something like 97% of Wall Street traders and that’s an amazing accomplishment.

In this week's episode, Patrick and Peter take a look at the quilting and knitting industries to see the impact of a hypothetical subscription box service.