Tearing down the pricing of Carbonite and Backblaze

If your house caught fire, what would happen to your data sitting on your laptop or in all those external drives under your desk? Gone forever.

Fearing scenarios like this, more and more people are turning to online backup services like Carbonite and Backblaze to keep their data safe and secure. And not just individuals. These two companies offer services to companies and data centers to make sure the world's data is always available. Today, they are going head to head on this week’s Pricing Page Teardown, where Peter and Patrick decide who’s the winner and why.

Carbonite is a fourteen-year-old public company with a market cap of $981M. Backblaze is a profitable company that was founded in 2007 and has raised $5.3M in venture funding. Both companies offer yearly plans that make it easy to back up data from your personal computer or company computers and servers.

The two are often compared as they offer similar features. But there are major differences when it comes to both pricing and the buying experience itself.

Confusion is fatal to pricing pages

Pricing pages are where the rubber meets the road when it comes to converting customers. If at any point they get confused, they’re going to bail out. Our two contenders show the right way and the wrong way to make sure they stay with you through this crucial process. The wrong way—overwhelm the prospect with options and details. The right way? Take them through the sign-up process step by step without any distractions.

Carbonite’s pricing sign-up process is a classic example of the wrong way. It gets progressively more confusing as you go along. The first step works okay, identifying what kind of customer you are—single computer, multiple computers, and so on. This is reasonable because you make one choice that fits your situation.

But after that, you’re sent down a rabbit hole. The next screen reveals the weakness in Carbonite’s design. There are far too many choices. 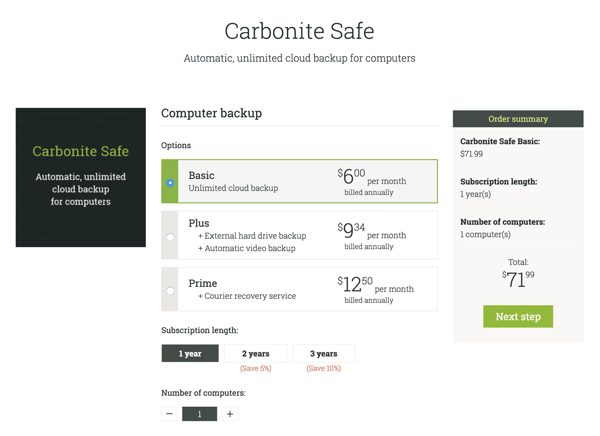 “These choices are good, but the way they’re being presented is just causing more confusion,” says Patrick.

This is key, because as our pricing page design research has found, if a prospect experiences confusion, they’re far less likely to stick with you and take the next step—parting with their hard-earned cash. This is true even when it comes to tech-savvy users.

We saw this with our New York Times pricing page teardown. They put too much on the page and ended up creating confusion at this pivotal point in the decision-making process.

Backblaze, in contrast to Carbonite, has a clear, easy-to-follow sign up process. You choose from three simple options—Personal, Business, B2 Cloud Storage. From there, you get one choice: a button you click to try out the service for free. The next option is to enter your email. This alone works well for all kinds of companies. 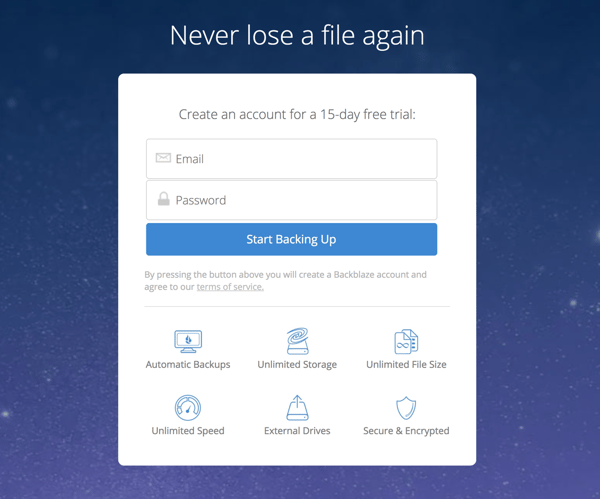 The results speak for themselves.

That’s not all. Backblaze beat Carbonite on purchase flow, with much faster checkout times. On Backblaze, the average checkout time was less than half of Carbonite’s, as you can see below. While it might be okay on the business side for this to be slower, it’s bad on the consumer side. To get better conversions, Carbonite needs to make some changes.

What we see here is that customers bail out when the pricing process has too many options. As Barry Schwartz explains in his TED Talk “The Paradox of Choice,” the prevailing belief that people want lots of options is wrong.

More often than not, we want fewer choices and more expert guidance instead. For example, Schwartz talks about the way doctors present surgery options to us these days. They tell us the pros and cons of each, rather than advising us what to do.

Carbonite makes the same error as those doctors. They assume that customers want to be informed of all their options. In fact, they want to be guided to the solution that fits their needs.

In its effort to give prospects all the options, the company is driving potential customers away. You can see this most dramatically in Carbonite’s poor completion rates as compared with competitor Backblaze.

How They Square Up on Pricing

Then there’s the pricing itself. Backblaze is cheaper, with individual plans at $5/year, $50/year and $95/two years. Backblaze also gives you the option to pay month to month, which Carbonite doesn’t. Carbonite’s basic plan is $6/month (or more depending on options), and $71.99/year.

Here’s how the two look when it comes to willingness to pay (WTP). Carbonite is pricing at the top end of the range, while Backblaze is pricing closer to the median WTP.

Remember that your pricing should always be based on the value to your customers.

In the case of Carbonite, it’s taking a more aggressive strategy with pricing because it has the industry advantage. Backup requires a high degree of trust—you’re handing your data over to a third party. As a bigger name and more established player, Carbonite can charge more.

When it comes to features, Patrick thinks both companies are missing out on opportunities to optimize their offerings. This is particularly true in the upper left quadrant of the graph below.

Many of these features could be unbundled and sold as upgrades to those who need them. HIPAA support is a great example of this. It’s a must for hospitals and doctors' offices that are required to protect patient privacy. These customers have a high WTP and would pay a premium to get it. On the other hand, almost all others don’t need it.

The same can be said for unlimited data. You might think that any customer would want this but in fact, for most users, it’s overkill. That said, there are those who do need it, such as a genomics lab that must deal with huge data sets. For that company, this is an upgrade that’s worth paying a premium for.

File versioning could be another great opportunity to upgrade those who have a high WTP. In brief, this feature gives you a history of your files, so if you need to retrieve an earlier version for any reason, you can.

It's also a defense against ransomware attacks, where hackers will try to force you to pay to unlock a file. With versioning, all you have to do is retrieve an earlier version of the file and you’ve foiled the hackers.

Backblaze, in particular, could be doing far more with this feature. As it now stands, you only get 30 days' worth of versioning on all plans. For many if not most customers, this is fine. But others might want longer histories to refer back to, such as graphic design shops that have a lot of image files that are prone to corruption.

Then there are super techy features that most people have no idea about, like auto threading and throttling. This kind of stuff confuses all but the few hardcore IT folks out there. But the few who do care might be willing to pay extra for this feature.

All of these things can be examined for better optimization.

Backblaze seems to be in closer touch with what customers want and need, Patrick says. Carbonite, meanwhile, is over-optimizing.

This “sounds negative, but might be okay given their stage as a company and what they’re trying to do,” says Patrick.

And the winner is...Backblaze. Both Patrick and Peter agree that, when it comes to choosing a service, it’s the better choice. Backblaze is cheaper, and the buying experience is simpler.

This head-to-head matchup proves how important it is to nail the buying process. Even with something as humdrum as data backup, the experience matters.

Carbonite is turning people away by making this experience too complicated. Meanwhile, Backblaze is reaping the rewards by making it easy to sign up and get started using its product. The difference is clear.