How Australian Subscription Companies Differ from American Ones

This week on the ProfitWell Report, we're going international to answer a question from Sancar Sahin at Typeform. Sancar is wondering: How does the Australian subscription scene stack up to the one in the United States?

To answer his question, we studied the data from over five thousand companies.

One beauty of the subscription and SaaS world is the way companies have been popping up and flourishing all over the world–not just in Silicon Valley. One fascinating place with massive success stories has been Australia and New Zealand, where companies like Atlassian, Canva, SafetyCulture, and even Xero have pushed this region into the forefront of the subscription economy.

While Australian companies may not be the fastest growing, they tend to focus on experience and customer retention much better than their U.S. counterparts. From a net promoter score standpoint, which is a measure of customer satisfaction, Australian companies in both B2B and in the consumer spaces are noticeably better than U.S. companies in similar industries. While all NPS scores have fallen over time, Australian NPS scores tend to be 15% to 30% higher.

While we don’t have data that exactly gets to the why this is happening, qualitatively we tend to see that support and design quality are much better with Australian companies, where even the nerdiest enterprise B2B software products get lots of user experience love.

You see this when comparing retention numbers as well. When comparing gross revenue retention across companies selling different levels of products, you’ll notice that Australian companies consistently have 10 to 23% lower churn than their US counterparts in both B2B and B2C. 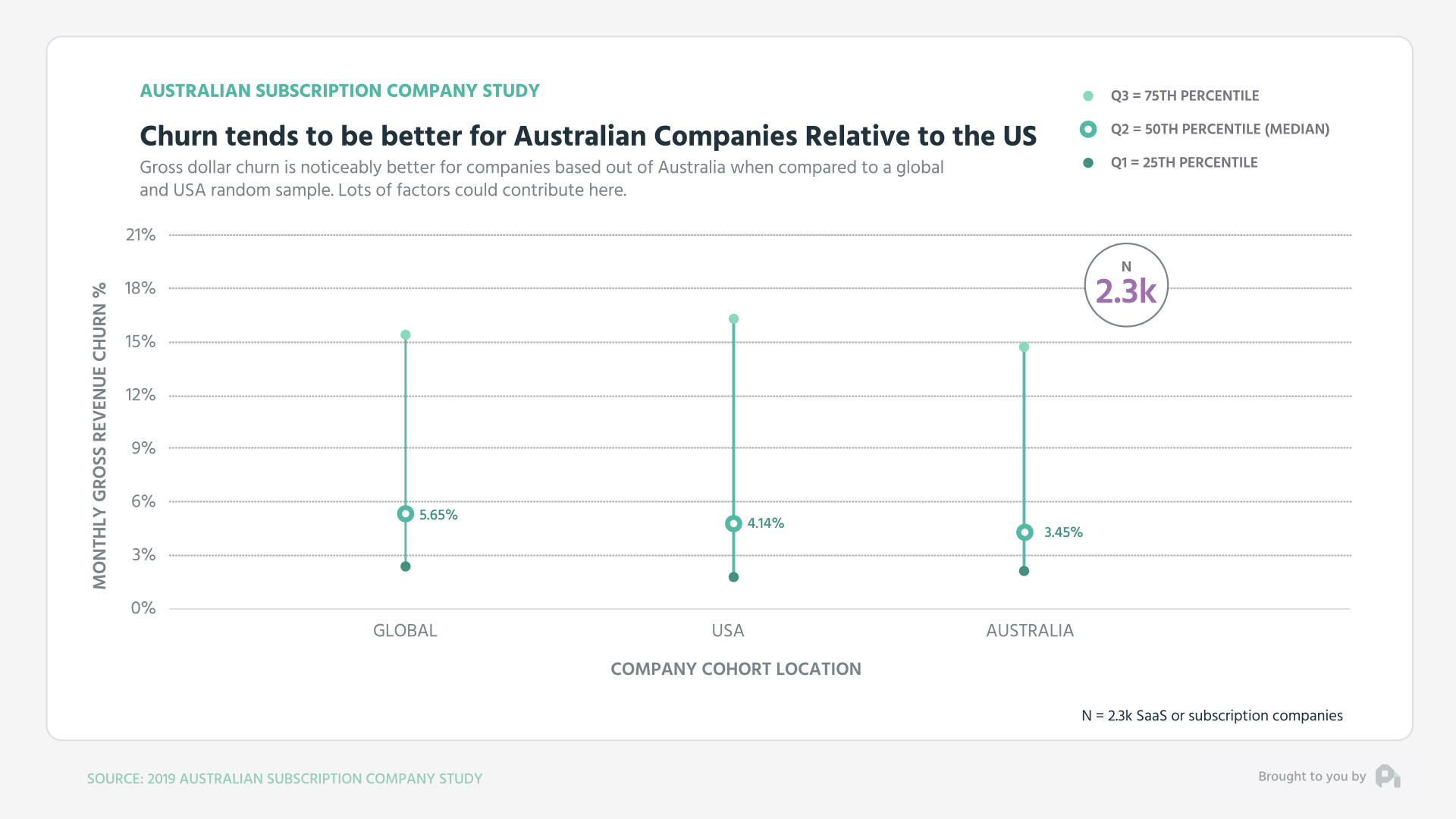 One theory here is that if you take a step back and think about how the Australian subscription economy developed, there may be a bit of a Goldilocks effect. Atlassian’s rise (Australia’s major anchor company) happened at just the right time and resulted in many other companies popping up or having an ecosystem that supported them. This all happened in the past ten years, which is right when design and great support started to be even more important. U.S. companies got that memo later, because they were able to rest on their laurels of the old guard.

So is everything better for Australian subscription companies?

Well, not exactly. Australian companies actually have much bigger problems when it comes to extracting value from their customers. When looking at the growth – or lack thereof – of the average revenue per user (ARPU) you’ll notice that overall, Australian companies are stagnant or trailing their U.S. counterparts pretty considerably.

This is important to note, because your ARPU is an individualized proxy for growth when it comes to your pricing, target customer subset, and even your upgrade trajectories. If Australian companies aren’t able to grow their ARPU, then they’re running into potential problems when it comes to growth.

All that being said, the Australian ecosystem is strong, particularly because of their focus on activities that procure higher NPS and retention. There’s some work to do on actually getting the revenue that these companies are worth, but I’d rather start from a place of strength of experience than one with unhappy, churning customers.

That's all for this edition of the ProfitWell Report. If you have a question, send over an email or video to neel@profitwell.com and if you got value here or on any other week of the report, we appreciate any and all shares on Twitter and LinkedIn. That’s how we measure if we should keeping doing this or not. We’ll see you next week.