Amazon Music & The Law of the Opposite

In their 1993 classic, The 22 Immutable Laws of Marketing, Al Ries and Jack Trout name the Law of Duality, which states that every market eventually becomes a two-horse race at the top.

This feels familiar given some classic examples:

A more recent example is music streaming, where Spotify and Apple Music have been duking it out for years.

While it may seem like their duopoly at the top is unapproachable, another law from the book makes me believe one of their challengers is poised to take Apple’s spot.

The Law of the Opposite

In the music streaming race, Amazon Music is usually an afterthought.

However, as Spotify and Apple Music have been battling for ear-share, Amazon Music has quickly risen to the third spot. Over the last few years, Amazon has grown subscribers at a higher rate than either of them and they closed 2019 within 4% market share of Apple Music. 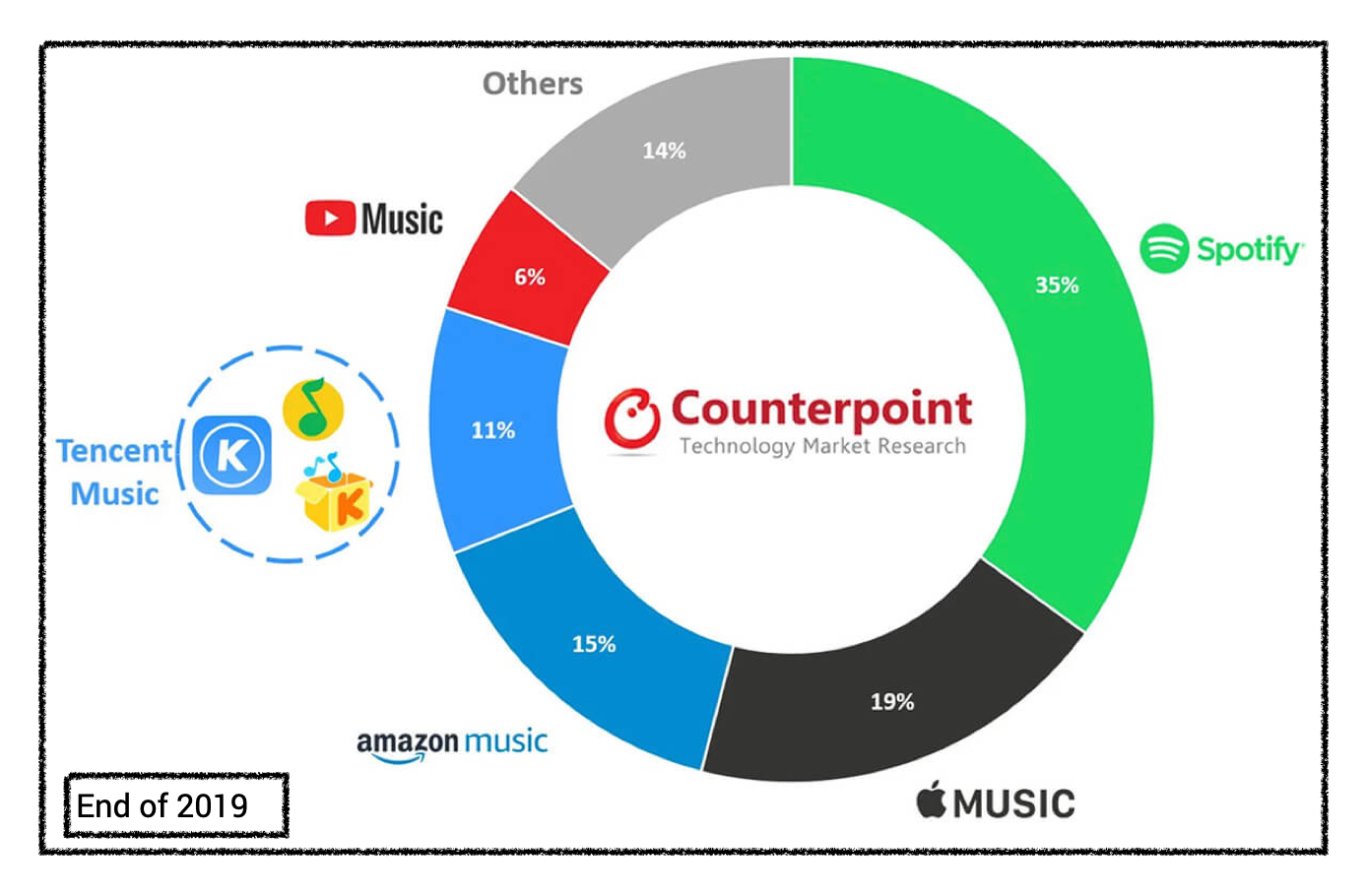 While The Law of Duality sets the context, the Law of the Opposite helps explain Amazon Music’s success.

The Law of the Opposite states that in strength there is weakness. Wherever the leader is strong, there’s an opportunity for a would-be No. 2 to turn the tables. To become the second horse in a race you need to be strong where the leader is weak.

Ries and Trout cite a trap that companies often fall into: trying to be better when they should be trying to be different. In music streaming, this definitely seems to be the case.

Spotify has separated themselves at the top by focusing on millennials and building a beautiful product centered around personalization, discovery, and playlists curated by tastemakers. Apple Music, meanwhile, has tried to do pretty much the exact same thing…

Enlisting Drake and Dr. Dre for playlist curation and building their flagship show around Zane Lowe endear Apple to artists, but don’t seem to be moving the needle for subscribers. As Spotify continues doubling down on tastemakers in podcasting with acquisitions like Gimlet Media, The Ringer, and an exclusive partnership with Joe Rogan, it feels inevitable that they’ll continue stealing subscribers from Apple Music.

Amazon, on the other hand, has seemingly watched this play out and made a point to do the exact opposite. While Apple has been unsuccessfully fighting Spotify with a similarly streamlined approach to packaging, Amazon Music’s packaging strategy is a convoluted mess centered around one key principle: being different.

While Spotify and Apple Music generally offer all-inclusive packages differentiated by number of users, Amazon differentiates along other axes. Specifically, price and use case.

Amazon Music Free offers an ad-supported selection of top playlists and thousands of stations for free. This plan is similar to Spotify’s Freemium offering, which is ad-supported, and allows users to listen to any playlist, artist, or album in shuffle mode.

Prime Music is different. Users get an ad-free experience and can select from up to 2 million songs, plus thousands of playlists and stations. Prime Music plays a multi-faceted role in Amazon’s strategy, as both a way to drive Amazon Music Free users to upgrade to Amazon Prime and a funnel to drive Prime members to upgrade to paid music plans.

If an Amazon Music Free user wants to get rid of ads, they might look at paid options, but they also might look into Prime Music, and everything else Prime has to offer. Considering Prime is widely considered the best subscription bundle in the world, it’s a compelling upgrade.

If Prime Music users find their favorite artists missing from the selection of 2 million songs, they have options… 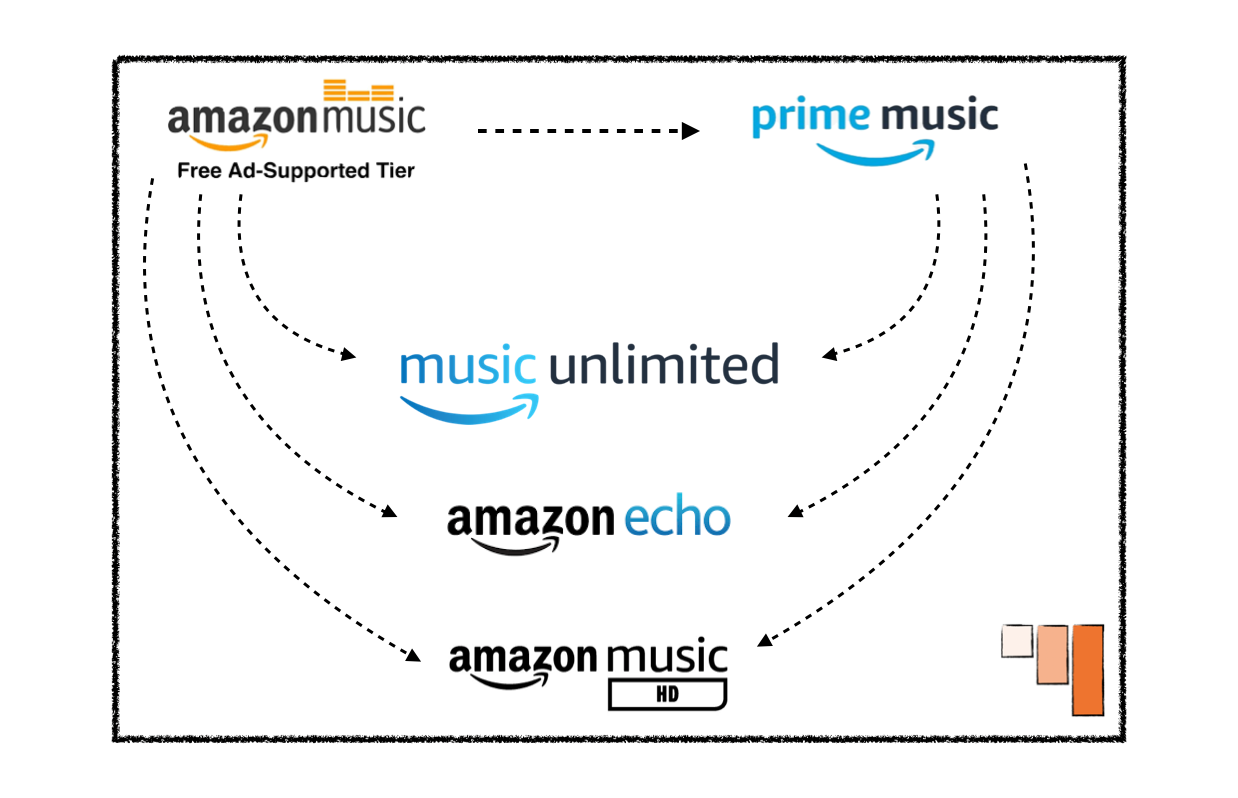 The most conventional option is Amazon Music Unlimited. Unlimited is the closest equivalent to Spotify’s Premium plan and Apple Music’s individual plan, which both cost $9.99.

Amazon continues the value play here by offering Unlimited at $7.99 per month, a 20% discount to Spotify, and Apple Music. Beyond that, they offer an annual option with an even deeper discount. At $79 per year, it’s $20 cheaper than Apple’s annual offer, and $40 less than Spotify annually.

These options make it clear that Amazon’s targeting the price-sensitive music consumer that doesn’t care about tastemaker curation. While not the only factor, this is likely a big reason Amazon Music has had success with an older demographic. The last time both companies reported their demographic breakdown, the 55 or older crowd made up 14% of Amazon Music’s subscriber base and only 5% of Spotify's.

While positioning themselves as the cheaper alternative to Spotify and Apple would likely be enough to snag some market share, it wouldn’t make them a true opposite. This is where Amazon gets creative...

First, Amazon offers an HD plan targeting audiophiles that want CD-quality sound or better. The HD plan offers 60 million tracks in HD, and is compatible with Echo devices, giving Amazon Music another path to new subscribers by drawing from Echo customers that prioritize sound quality, but don’t want to pony up for a Sonos or Bose. While smaller players like Tidal and Deezer have similar offerings, neither Spotify nor Apple differentiate plans by sound quality.

Amazon’s most creative offering is the Echo-only plan, which gives users full access to Amazon Music Unlimited through a single Echo or Fire TV device. At $3.99 per month, the Echo-only plan can stand on its own but is also cheap enough to complement another subscription, even if it’s not Amazon Music.

For instance, my wife and I share an individual Spotify subscription. In the house, we listen to it through our Echo, but there are times when one of us is listening to music in the house and the other wants to listen on the go. Inevitably, there’s a struggle for control of Spotify, a battle that can get contentious...

Spotify’s new Premium Duo plan solves for this, and we’ll probably upgrade soon. That said, it’s worth noting that an Amazon Music Unlimited subscription plus an Echo-only subscription would be cheaper. For price-conscious consumers that don’t care about personalization and podcasts, it’s a compelling alternative.

Of course, these use cases aren’t mainstream - they’re weird! But that’s exactly the point. Just look how Amazon positions their plans against Spotify: 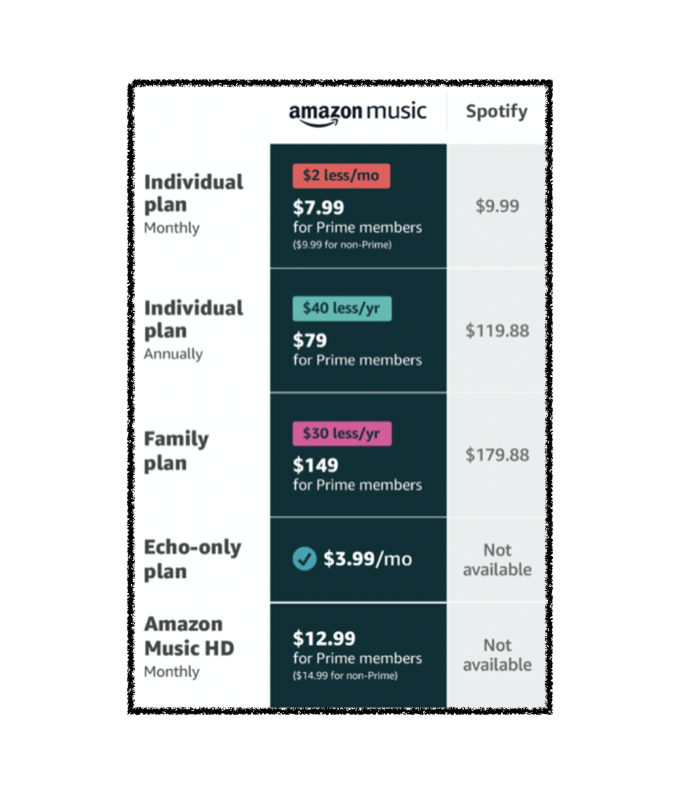 Amazon knows they can’t beat Spotify from a product perspective, so they’ve optimized their entire packaging strategy around areas where they can win: price, Prime, device-specific plans, and an HD experience give prospective users a list of reasons to consider Amazon Music over Spotify.

Unfortunately, it’s hard to argue the same for Apple.

With Spotify building an insurmountable lead at the top, the biggest question here is how Apple responds, and more importantly if they respond at all. Lately, it doesn’t seem like music is high on their priority list.

If they do respond, Apple has plenty of levers to pull. While Amazon has leveraged Prime and the Echo to create differentiated offers, Apple could do something similar with AirPods, Beats, and their other devices. Perhaps even more interesting would be the much-hypothesized bundle offer of Apple Music with Apple TV+ and Apple News+.

Whatever they do, they should do something soon. As Spotify continues scooping subscribers with each addition to their exclusive podcasting lineup, Amazon is putting on a clinic in differentiation. Assuming nothing changes at Apple, I expect Amazon Music to continue chipping away at the price-sensitive and fringe crowds to continue gaining market share.

While on the surface Amazon’s packaging may look scatter-brained, it seems to be working. Soon, it may be the reason there’s a new #2 in town.

Peloton has one of the most aspirational brands in the subscription economy. Traditionally, to be a customer, you had to be willing to make a serious investment, limiting their target market to the healthy and wealthy. Recent moves suggest they're welcoming a much broader customer base than they have traditionally.

Can Spotify keep their music throne?

In this episode of Pricing Page Teardown, we're talking about music juggernaut, Spotify, which revolutionized the music industry, breaking the chains of the labels and making unlimited music, free.