In this week’s episode of Tradeoffs, Hiten (co-founder of FYI and Product Habits) and I take a look at the fastest-growing company in SaaS history, Slack. Growing from a startup to a company with 1,664 employees in just five years, Slack is in a unique position to continue leading the charge in online business communication. But its insane growth may actually be hiding big issues for Slack’s future.

In a market that’s inundated with new competitors, Slack’s position as top dog is definitely going to be challenged. Even more so because its user base, while substantial in size, has become significantly less engaged in the past few years. Hiten and I talk through how this disengagement with the product hurts Slack for the future and dig into how its high-speed growth actually led to making tradeoffs due to lack of resources.

Insane growth makes it hard to focus on what matters

Founded in 2014 after a huge pivot in product focus, Slack reports 10+ million daily active users and $85K in paying users. It has ridden a wave of hype and user engagement that’s frankly amazing. Now, with a public offering on the horizon, this fledgling company is on the cusp of another evolution that could make it even more difficult for Slack to see the smaller issues in its current product strategy.

Instead of refining its product and building out the features that users want, Slack was forced to figure out ways to scale its infrastructure and support a larger team. That puts it in a situation where a new platform could come along and offer up the exact features Slack’s product is missing.

“More than erosion, or more than monetization, Slack should be worried about getting disrupted.” - Hiten Shah

To add to this, being such a young company means Slack has less brand loyalty. A lot of its users haven’t been with the company that long. We wanted to find out how long, so we surveyed current Slack users and asked: how long have you been using Slack? 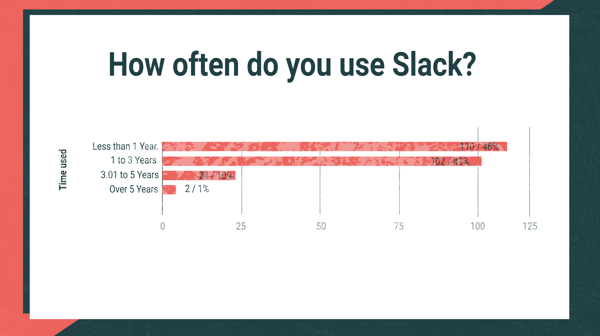 Forty-six percent of users said less than one year, which isn’t a position for Slack to be in from a growth perspective. But it also means that a significant amount of its user base hasn’t had the time to become invested in the product. To solidify its position for the future, Slack needs to start building customer loyalty as fast as possible and consider what types of features will help it retain users longer.

Right now, the switching cost to leave Slack is pretty low as well. Unless a customer has integrated it into other aspects of their business infrastructure, such as Google Drive or a product management tool, they’re not all that devoted to the product. This is something we saw in our Pricing Page Teardown of their service as well. The willingness to pay for customers who’ve integrated Slack with other services increases alongside the number of integrations made. Where someone with one to three integrations is willing to pay 10% to 15% more, someone with five to ten is willing to pay 25% more.

If Slack doesn’t figure out what features its next growth phase should include, it’ll quickly plateau and leave the market open for disruption from the next service that has what users really need.

“One thing to keep in mind is that product-market fit is a moving target anyway. If you’re not continually trying to double down on your core value prop, you might lose sight of why people love you in the first place.” -Hiten Shah

Since Hiten first looked into Slack’s growth back in 2015, its product-market fit and NPS scores have dropped considerably. In both cases, these decreases show that while the company has been growing consistently over the past few years, its current customers aren’t actually satisfied with the product. For a company that’s in the midst of an IPO, that’s a bad spot to be in, because it doesn’t have a solid base for the next big step the company takes.

This means that a sizable segment of its user base is not happy with the product at all. You’d expect such a big name in the market to have a much better handle on what customers want.

To figure out why customers aren’t happy with Slack, we asked: how disappointed would you be if you could no longer use Slack?

Only 26% of customers said they would be “very disappointed,” which is down from 55% in 2015. This question is meant to figure out whether or not a company has product-market fit. To answer that question as a yes, Slack needed to hit a threshold of at least 40% of people being very disappointed, which it hasn't. And while a promising number of people answered “somewhat disappointed,” it still means that Slack has lost product-market fit in under four years.

That’s worrisome for such a young company, as it means it has already lost sight of what made users love it in the first place. To find out why, we asked: why would you be very disappointed if you could no longer use Slack? Thirty-one percent said it helps them communicate:

We’re seeing Slack’s core value proposition in a lot of these answers and in the comments made when we asked: what is the primary benefit you receive from Slack?

These responses are great, but it’s only coming from about a quarter of Slack’s user base. That leads us to the fact that only 55% of people we surveyed have recommended the service to anyone. That’s less than Microsoft Office, which had 60%, and G-Suite with 90%.

Looking at the data, Slack is in a really tough position for the future. To continue its growth in the market, or even fortify its current position, it'll need to figure out how to make these people change their minds. If it were up to the two of us, we'd suggest it doubles down on the integrations side of things. That can provide a lift in both loyalty and willingness to pay that will drive up its NPS and product-market fit scores.

“When something should be treated as asynchronous communication, it’s hard for us to treat it that way. Communicating on Slack is so easy and feels synchronous instead.”

Slack has made it so easy to communicate using its platform that, for many users, it’s created additional noise and distraction. That drives down engagement because people feel the platform actually takes away from their ability to be productive. There should be some sort of forcing function to bypass this issue that’s built into the product itself.

You see this in the feedback we received when asking: how could Slack be improved to fit your needs?

We’re not going to focus on the 35% of respondents that said the product is fine because it doesn’t give us, or the product managers at Slack, any indication of where to focus their efforts next. The long-tail responses are where Slack can really find good information.

Both Hiten and I want to focus on one piece of qualitative feedback as a part of that survey:

I think the interface for Slack could be better organized for productivity.

This feedback is an indicator of how Slack is failing some users and shows a level of investment from users who actually care about the product. Following up with those individuals who gave this feedback will surface real insights into the larger issues with Slack’s product. To continue growing and fortifying its platform against competitors, it’ll need the data to make their users happy.

If it doesn’t, it's leaving the market open for disruption from a new platform. When we asked about which platforms Slack users would use as an alternative if Slack were no longer available, we didn’t see any strong competitors.

There’s no one that’s nipping at Slack’s heels at the moment, so any company that figures out the “next big thing” will have an easy time entering the market.

Where does Slack go from here?

“Not everyone is going to be happy, so how do you make sure that enough people are happy to keep the hype, the business, and the growth going long term?”

To continue winning in a market that’s growing quickly, Slack needs to double down again on its core value proposition. This means figuring not only what customers want from Slack’s service, but the specific reasons why current customers are leaving for other platforms.

There’s a part of the Jobs-to-be-Done framework called the "Switch Method," which can help it figure this out. It basically breaks down why people switch from (or to) Slack’s platform. Once they know this, Slack can start giving customers more of what they need and hopefully turn around its NPS and product-market fit scores.

This wraps up episode four of Tradeoffs. We’d love to hear your feedback, so let us know what you think about the new show on social media with #Tradeoffs. And be sure to share it with your friends.